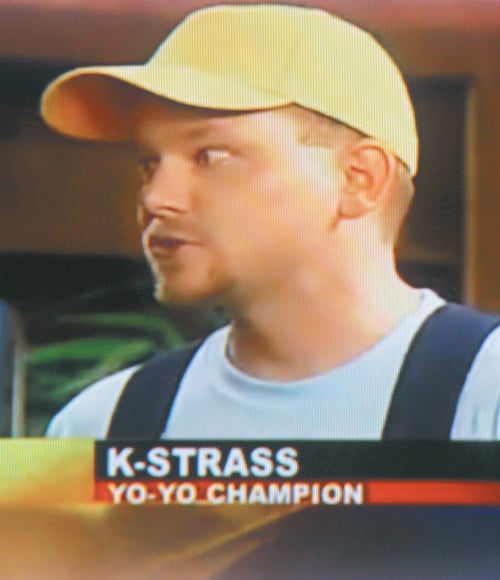 Mark Proksch made eight appearances on Midwestern local morning TV news shows as Kenny Strasser, or K-Strass, a supposed yo-yo master spreading a message of environmentalism. Three of his appearances can still be seen online. 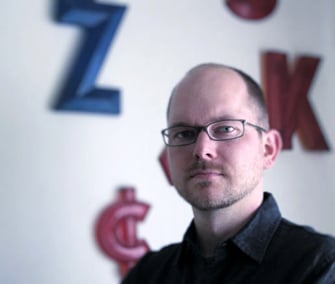 Mark Proksch’s temp job with an advertising agency had fallen through, and things were so tough financially he had to tap his parents for help with his phone bill. That was last spring. On Thursday, he’ll make the second in a string of appearances on the NBC comedy “The Office.”

It’s been a year of ups and downs for the former Onalaska resident, and he said he owes the upswing to sadsack yo-yo artist and environmental champion Kenny Strasser.

Hundreds of thousands of people have viewed online videos of Strasser’s appearances on Midwestern TV news shows, in which he comes across as socially awkward, painfully nervous and appallingly lacking in yo-yo skills and fashion sense.

One clip alone has topped a million views on YouTube.

Kenny Strasser was actually Proksch, and the TV appearances were all part of an elaborate and innovative film project he conceived in collaboration with his longtime writing partner, Joe Pickett.

They didn’t set out just to dupe the TV stations. Proksch and Pickett wanted to tell the story of Kenny Strasser through his appearance on the shows, with a couple of story arcs planned over the course of a dozen shows.

The stations never realized that “K-Strass,” as he liked to be called, was not a yo-yo champion in town to make an appearance at a local school to promote environmental awareness. At least, not until it was too late.

“If they were ever suspicious, I couldn’t tell,” Proksch said by telephone from Los Angeles in his first interview about the K-Strass saga that started last spring.

Proksch never broke character after his seemingly disastrous television interviews, and the news anchors wanted nothing more to do with him.

“It was like you had the black plague,” he said. “Everybody just runs from you.”

Proksch and Pickett didn’t intend for Kenny Strasser to become an Internet sensation. In fact, the exposure meant they couldn’t finish their film project because TV stations caught on and wouldn’t book them. A La Crosse TV station canceled a planned appearance and even warned its competitor to watch out for the scam.

But as one door shut, another opened, as K-Strass’ online audience exploded. “We had no idea it was going to get this big, ever,” he said.

And it was about to get bigger.

On to ‘The Office’

Amelie Gillette, who  Pickett and Proksch knew from her work at the satirical newspaper The Onion, had just started as a writer for “The Office.” It turns out writers at “The Office” spend a lot of time doing what many people in other offices do: watching YouTube videos.

When writers erupted in laughter at K-Strass’s foibles, Gillette mentioned she knew the people responsible. Quick as you can say “have your people call my people,” Proksch and Pickett were flown to Los Angeles for a meeting with a producer.

“Honestly, it was all luck,” Proksch said.

Proksch and Pickett now have a major project in development, but in the meantime, Proksch is using his acting skills on “The Office,” not as K-Strass but as a down-on-his-luck guy hired as the building maintenance man at Dunder Mifflin, the company whose Scranton, Pa., branch is the subject of the show.

Proksch’s first episode, in which he was hired and tasked with knocking down a hornet’s nest in the parking lot, aired Oct. 14 and was seen by an estimated 7.36 million viewers.

Proksch had a reputation as one of the funniest guys at Onalaska High School in the early 1990s.

He did improvisational comedy with Mark Hefti, who lived half a block away and was a year ahead of him in school.

“One of our favorites was to visit antique stores and basically drive the workers crazy with our list of antiques that we were hunting for,”  said Hefti, who now lives in Los Angeles and has a growing list of acting and writing credits in both film and television.

“We were both good at keeping a straight face, so it kind of became a competition of who could make the other crack first.”

Proksch went on to the University of Wisconsin-Eau Claire, where he met Pickett and started a satirical newspaper called The Daily Chimp. He moved to Minneapolis after college and worked on short films.

He later moved to the San Francisco area with his girlfriend. He kept his hand in film projects, but they took a back seat to his day job as an administrative assistant at a major banking institution.

About a year ago, having broken up with his girlfriend, Proksch decided to move to Milwaukee, where Pickett was living. Pickett had done a touring show called the Found Footage Festival, which featured humorous video clips he had picked up at rummage sales, thrift stores and dumpsters.

To promote Found Footage, Pickett would try to book local morning TV news appearances, and from those experiences, Kenny Strasser was launched.

“We figured out there’s a magic formula to get on any morning show you want,” Proksch said. “You need to demonstrate something, you need to talk about a grandiose, all-encompassing theme — the environment is hot right now — and you have to make it local to them.”

Proksch’s parents, Arlyn and Mary, weren’t fans of “The Office,” but they are converts and look forward to seeing how his character develops on the show.

“It is a little surreal to turn on a TV show and watch one of your children performing. What are the odds?” said Arlyn, who now lives in the Denver area.

Proksch expects to be on four consecutive episodes of “The Office” starting Thursday. He might end up being edited out, but he’s been pretty lucky so far.

Divorces for Sunday, May 2

Mark Proksch made eight appearances on Midwestern local morning TV news shows as Kenny Strasser, or K-Strass, a supposed yo-yo master spreading a message of environmentalism. Three of his appearances can still be seen online.