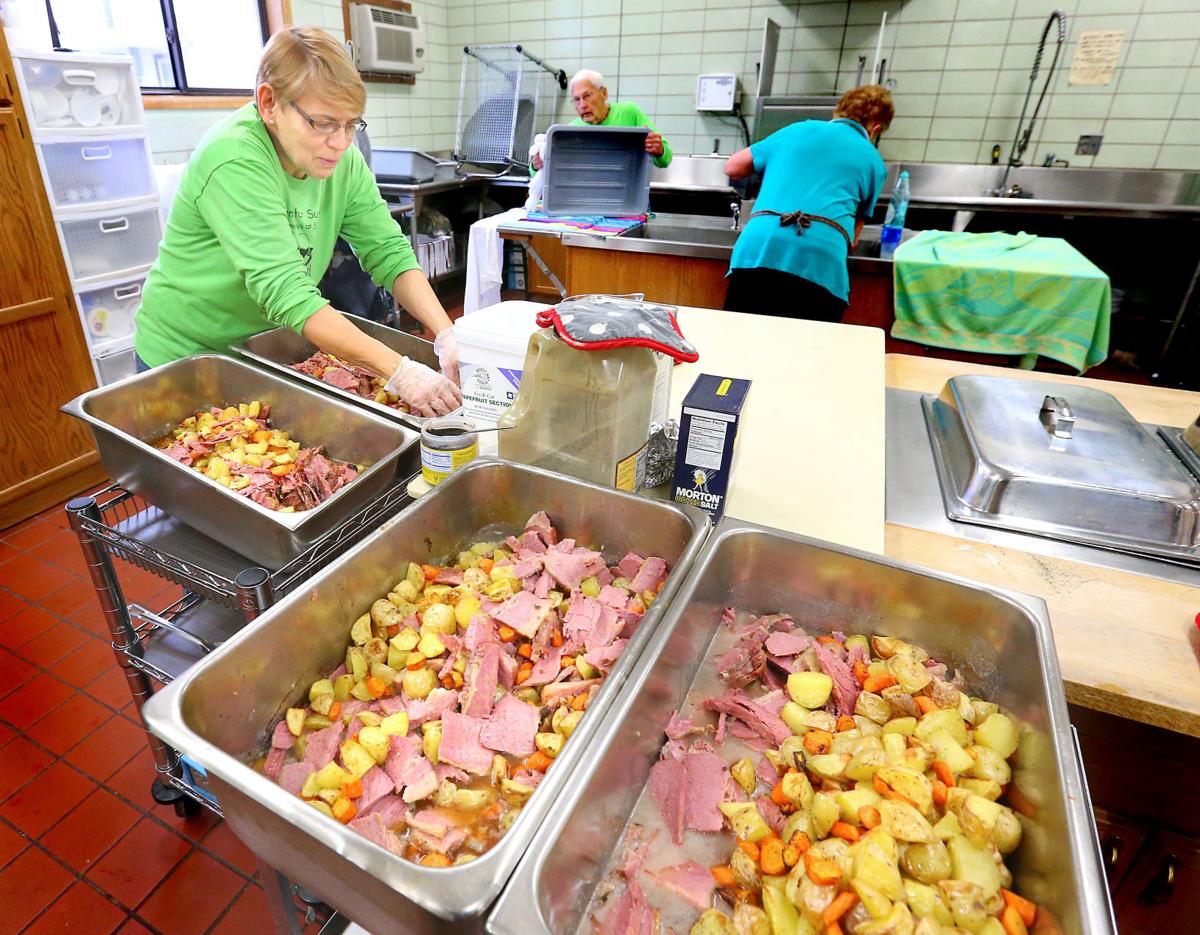 Gretchen Crary, one of the volunteer coordinators at Our Savior’s Lutheran Church, preps pans of brisket and potatoes for the Come for Supper meal Tuesday, which served 265 people. 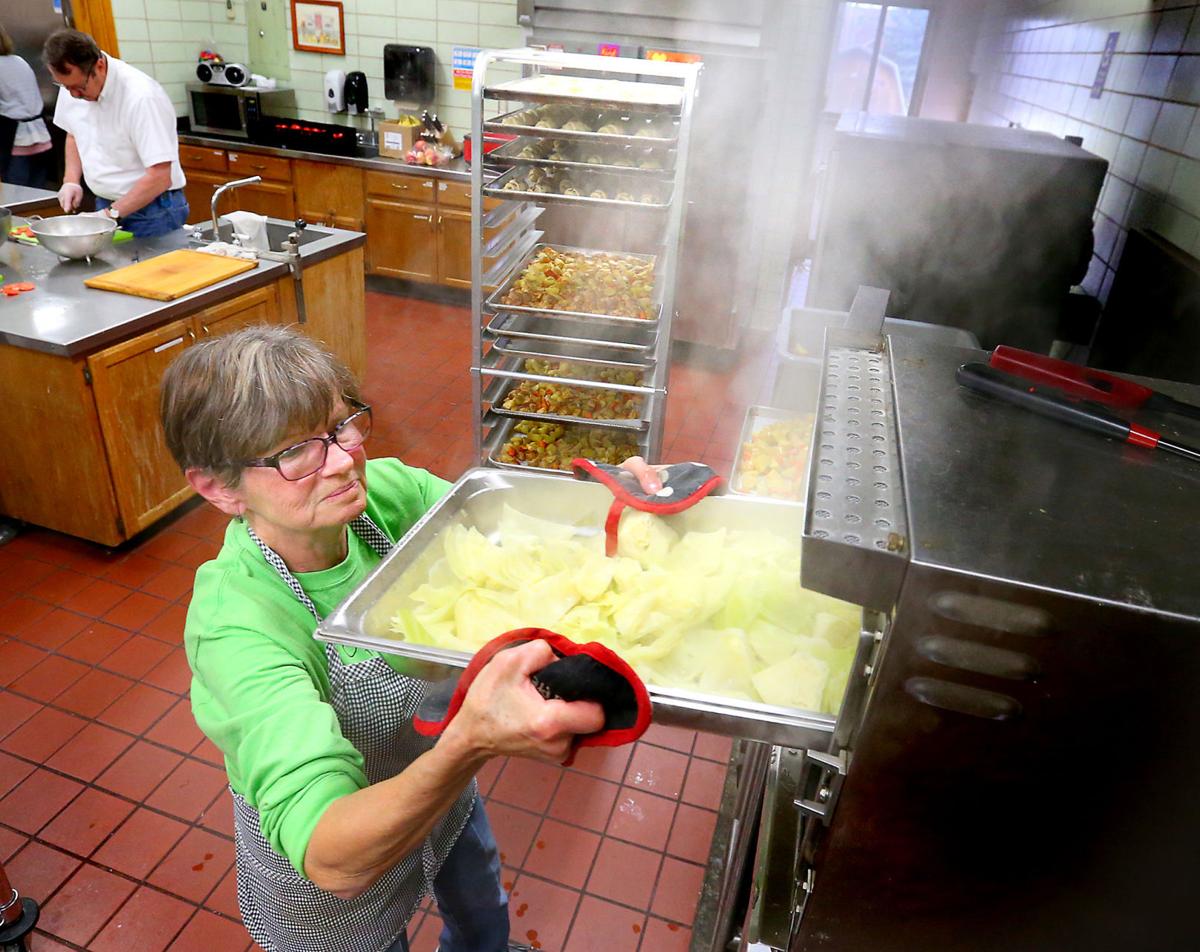 Nancy Klapper, a volunteer coordinator at Our Savior's, pulls a steaming tray of cabbage from the oven for part of the brisket dinner she helped prepare for the church's Come for Supper dinner Tuesday.

Members of Our Savior’s Lutheran Church in La Crosse hoped for the best and feared the worst when they invited people to their inaugural Come for Supper, a free weekly meal they have continued for 20 years.

“There was no way to predict, so we prepared enough for 100, because our greatest fear was not having enough or having too much,” said Sonja Simonson Schrag, one of the original organizers as a member of Our Savior’s Social Ministry Team.

About 35 people showed up for the supper on Dec. 3, 1996, easing the team’s angst, because the suppers began with church members bringing the food a la potluck, so nothing went to waste, Simonson Schrag said during an interview in the downtown church hall Tuesday as she and other volunteers prepared a brisket and cabbage meal, with side dishes and freshly baked rolls, for that evening.

The turnout affirmed the team members’ intuition about what they perceived as a growing problem with poverty and hunger in the neighborhoods surrounding the church at 612 Division St.

“People were suffering from food insecurity — the term they use for it today — and they were our neighbors,” she said.

“We were careful, not saying that it was for ‘the hungry’ or ‘the homeless.’ There is no means testing. It is ‘Come for Supper’ — an invitation. It doesn’t define who should or shouldn’t come,” Simonson Schrag said.

Nowadays, the supper regularly draws 200 diners — more on the Tuesdays toward the end of the month when food stamps are gone and food shelf allotments have run out. The numbers peak on the final supper of months with five Tuesdays, as November had — the tally Tuesday was 265, including carry-outs.

“Sharing the bounty adheres to the basic principle of welcoming strangers,” Simonson Schrag said. “Some people come for companionship — people living alone in the high-rises around here. They have made friends among themselves, so it is a social event for them.”

Many of the original volunteers are gone, having moved away or passed on, but new members have followed in their footsteps and members of dozens of other churches and organizations are providing reinforcements to help carry the load.

Patrons include families as well as individuals, plus the occasional unaccompanied child, Zinniel and Simonson Schrag said.

“Sometimes, a boy who is about 10 comes by himself, and we really watch out for him,” Simonson Schrag said. “A child alone raises an interesting issue — after school, apparently nobody is at home even after 5 to feed him.”

Our Savior’s plans to celebrate Come for Supper’s 20th anniversary with a ceremony at 4:45 p.m. Tuesday, followed by the supper. Among those attending will be representatives from the first supper teams, including, besides Simonson Schrag, former Pastor Rachel Thorson Mithelman; the Rev. Mark Jolivette, who was pastor for 10 years; current volunteer coordinators Gretchen Crary, Nancy Klapper and Rod Tishammer, the core team of volunteers, and Interim Minister Joanne Richmond.

In the beginning, the program coordinators set a menu, and congregation members volunteered to bring certain dishes, Simonson Schrag said.

“We began even then to team up with others (congregations), and they stepped up, and we’ve been very fortunate,” she said.

Donations from individuals, churches and businesses, including generous offerings from Panera Bread Co. and grocers, and grants from the La Crosse Community Foundation and the ELCA Domestic Hunger Grant program, also keep the supper on the table. Food also comes through the Hunger Task Force, with Our Savior’s providing some reimbursement to that agency.

A core group of volunteers begins meal prep around 1 p.m. each Tuesday, providing consistency and knowledge of where everything is in the hall’s well-equipped kitchen. The fact that it has a dishwasher was a plus from the start, especially in meeting health regulations, Simonson Schrag said.

The kitchen also is used for a variety of church activities and meals, she said, with Zinniel adding, “You won’t go hungry at this church.”

“Fast-food shortcuts we were not going to do, like frozen scalloped potatoes,” Simonson Schrag said.

Coincidentally, scalloped potatoes figured into the only nearly botched course during the two decades, she said. Without getting into the details, suffice it to say that the potatoes were peeled, sliced and covered with cold milk by around 3 p.m. but weren’t quite ready by the time the dinner bell rang at 5 — a starting time the organizers swear by.

Well, they don’t really swear, but they’ll be darned if they’ll start late.

Organizations and churches that have helped Our Savior’s Come for Supper include:

More information about the suppers is available on Our Savior’s website.

‘We aren’t a bunch of lazy people’: Rejoining workforce isn’t easy for some who lost jobs to COVID-19

Gretchen Crary, one of the volunteer coordinators at Our Savior’s Lutheran Church, preps pans of brisket and potatoes for the Come for Supper meal Tuesday, which served 265 people.

Nancy Klapper, a volunteer coordinator at Our Savior's, pulls a steaming tray of cabbage from the oven for part of the brisket dinner she helped prepare for the church's Come for Supper dinner Tuesday.