One of the many headlines to come out of the COVID-19 pandemic has been about jobs, many asserting the virus as the main driver for an aching workforce. But a 2015 survey shows that the job shortage was likely to happen for the region with or without the pandemic.

Conversations with businesses and community leaders about half a decade ago showed that most employers were already struggling to find workers and that the region was on course for worsening conditions because of what’s known as a “brain drain” and rapid retirement rates, among other reasons.

The annual business survey in 2015 showed that 75% of regional respondents were in need of skilled workers, which prompted stakeholders to develop what is known as the “WISE Plan,” or the Workforce Innovation for a Strong Economy Plan.

Both the survey and the development of the plan worked across 14 counties in southwest Wisconsin and southeast Minnesota and Iowa, and involved more than 500 businesses and community leaders.

“The 7 Rivers Region needs to attract and retain 1,500-2,000 more workers each year during the next decade to keep up with employer demand,” a report on the findings of the survey and the WISE Plan development stated.

The region’s jobs issue has to do a lot with age.

The report outlines that, at the time, about 25% of the region’s workforce was 55 and older and nearing retirement age, while the region and state continue to experience a brain drain, where educated and skilled labor is migrating away, leaving an uneven pace of the number of people entering and leaving the workforce.

These findings show that the current job climate is not a new storm, just an intensified version of a storm that was already on its way.

“The pandemic has certainly contributed to more worker shortages, but it wasn’t that we didn’t know that this was coming,” said Chris Hardie, chief executive officer of 7 Rivers Alliance, the group spearheading the WISE Plan and survey.

Today’s numbers show much of what the survey and report forecasted.

According to data from the Wisconsin Department of Workforce Development, between 2015 and 2021, western Wisconsin had a 2.9% drop in employment, and a 5% drop since 2019.

But the pandemic has caused the trajectory of the job shortage to take different shapes and impact different people than originally expected.

It shows that it certainly derailed any work that might have been done since the WISE Plan was produced. There was a small boost between 2015-2019 with nearly 3,000 new workers added. But the region has subsequently lost nearly 7,000 since.

This loss was felt differently than expected, too, and industries that were expected to not face as much of a hit, such as hospitality, instead saw more damage. And while the decreases in employment between 2015-2019 hit a handful of sectors, the losses after 2019 were among almost every industry, and even those who didn’t necessarily see a loss saw much less growth than past years.

“I think COVID sped it up,” said Neal Zygarlicke, chief executive officer of the La Crosse Area Chamber of Commerce.

“It’s feeling worse probably now,” Zygarlicke said, because businesses slowed down or halted during the pandemic. “And now they’re trying to ramp back up and get back to levels that they were at before or expand to new areas and grow, and they’re trying to find these people now to fill those jobs. So the pandemic did add a major wrinkle to the worker shortage.”

At Fayze’s Restaurant and Bakery, the longtime downtown La Crosse eatery continues to struggle with workers, navigating about two-thirds of the staff it had pre-COVID. Kelsey Williams, who has owned the restaurant with her husband since 2008, said finding workers has consumed them.

“Instead of it being a part of our jobs it has become most of the job,” she said.

Williams was part of the business community that participated in the 2015 survey and WISE Plan development, and she said that the predicted shortage has now manifested in a different way.

“Everyone knew it was going to happen, and I think everyone was prepared differently, because I think now it is happening with vastly different preferences from most people,” she said.

Hardie said that the pandemic has created a “critical job shortage” in economic sectors that weren’t predicted to take a hit before, such as the hospitality and food service business and others that were directly impacted by shutdowns and other COVID-era changes.

“A lot of those workers found other jobs or some of them retired and this pool of workers that they had — getting that group of employees back is not something you can simply just flip on the switch and everybody comes back to work,” Hardie said.

While the virus has dampened the job crisis more, it may also be re-emphasizing and creating a renewed sense of urgency to get to the root of the region’s workforce issues. Comparing the WISE Plan report and today’s labor market finds that most of the key challenges that workers face have not changed, only intensified.

The WISE Plan focuses on talent preparation, recruitment and retention — or how to better educate potential workers, make jobs more accessible and then make them want to stay working in the region.

Some businesses and leaders started to do some of this work, but the pandemic has likely both derailed that work while also reopening the door to work on solutions at a quicker pace.

Hardie outlined that childcare, housing and transportation affordability and accessibility were the “big three” challenges that existed with or without the pandemic, but that one of the most critical of those fault lines was childcare.

Williams described that parents juggling working and getting kids to school or facing quarantines has been one of the biggest hurdles for employees at Fayze’s. Her family has been forced to juggle the issue, and Williams was at home with sick kids at the time the Tribune interviewed her. Usually she and her husband are at the restaurant filling in the gaps with the rest of the staff.

“Childcare got absolutely decimated during the pandemic and there are some parents that are still on the sidelines,” Hardie said. More parents are now taking fewer hours, odd-shift jobs or jobs out of their primary occupation to accommodate childcare and school.

The WISE Plan outlined specific plans for childcare by amping up private-public partnerships on childcare, promoting existing providers, educating employers on the value of childcare and more.

Hardie said a strategy that might be useful for employers to implement sooner than later is a school day shift, where parents can work from 9 a.m.-3 p.m. on weekdays, helping balance “the work-life equation.”

As workers face longtime hurdles with more magnitude due to the pandemic, this moment could help leaders hone-in on solutions the WISE Plan outlined. Those include creating more accessible and affordable housing, improving trade programs that continue to be hit hard, helping schools implement more workforce readiness programs, improving transportation systems, increasing promotions of jobs in the region to students and young adults and more.

But officials highlighted that the pandemic could have some positives and new solutions to workforce issues, such as the availability of virtual work that could allow more people to move to the region, and an increase in wages that many consider overdue.

Diversity and the workforce

The WISE Plan report identifies that a lack of diversity, not only in age but also in race and ethnicity, was also contributing to the workforce shortage.

It specifically states that a more racially and ethnically diverse workforce can help itself, by mirroring its customer base, spurring creativity and creating a more inclusive and welcoming community that could help retain and attract new residents.

That gap still has a ways to go, though, as Wisconsin Department of Workforce Development data shows that the region's workforce is still about 94% white, but a renewed conversation about race and equity in the country that seemingly coincided with the pandemic could prove to be a bit of a catalyst.

He said that the placement of Afghan refugees in nearby Fort McCoy could be an opportunity to build a more diverse workforce, too.

"We need to do a better job of making people feel welcome here and feeling like they're part of the community," Hardie said. "We've got a long way to go on that note."

Plus, beginning the work again to boost employment in the region is already starting to pop up, like at the Chamber, where it recently launched a new talent attraction campaign that will advertise to workers in other metro areas the advantages of moving and working here.

Still, even with this once mapped-out recovery that can provide a path forward for businesses, it is still complicated by COVID, and what was once a more linear road to recovery will now be more dependent on outside forces.

“Truly it is a day-to-day, week-to-week thing. I don’t even think at this point even in our industry we can plan for even the next month,” Williams said.

They’ve been waiting on new ovens for about eight months, she said, and they’re constantly bracing for possible new guidelines or shutdowns, and often don’t even know for certain what hours the restaurant will be open next week.

“COVID hasn’t just added an extra layer,” she said, “COVID has completely taken over our recovery.” 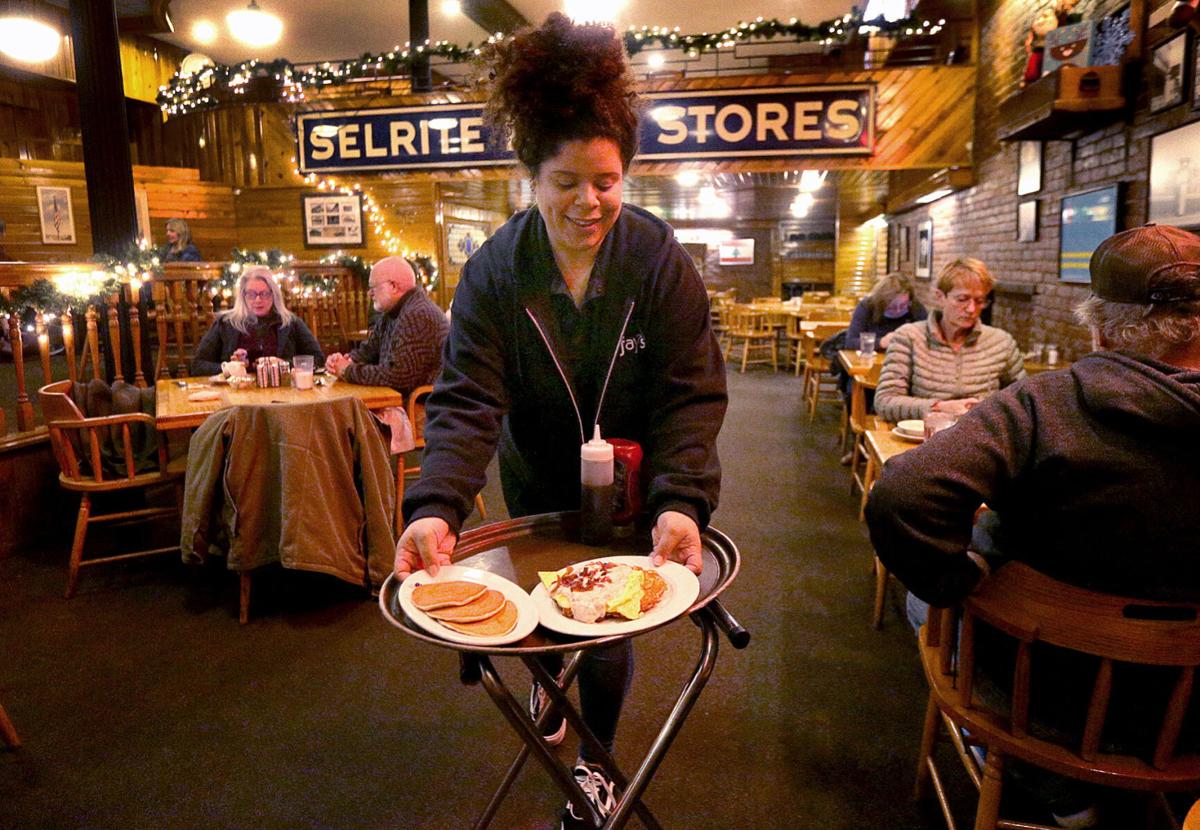 Fayze’s waitress JD Delpho works Friday during breakfast time. Local business are struggling to find enough workers due to a labor shortage that has been exacerbated by the COVID-19 pandemic. 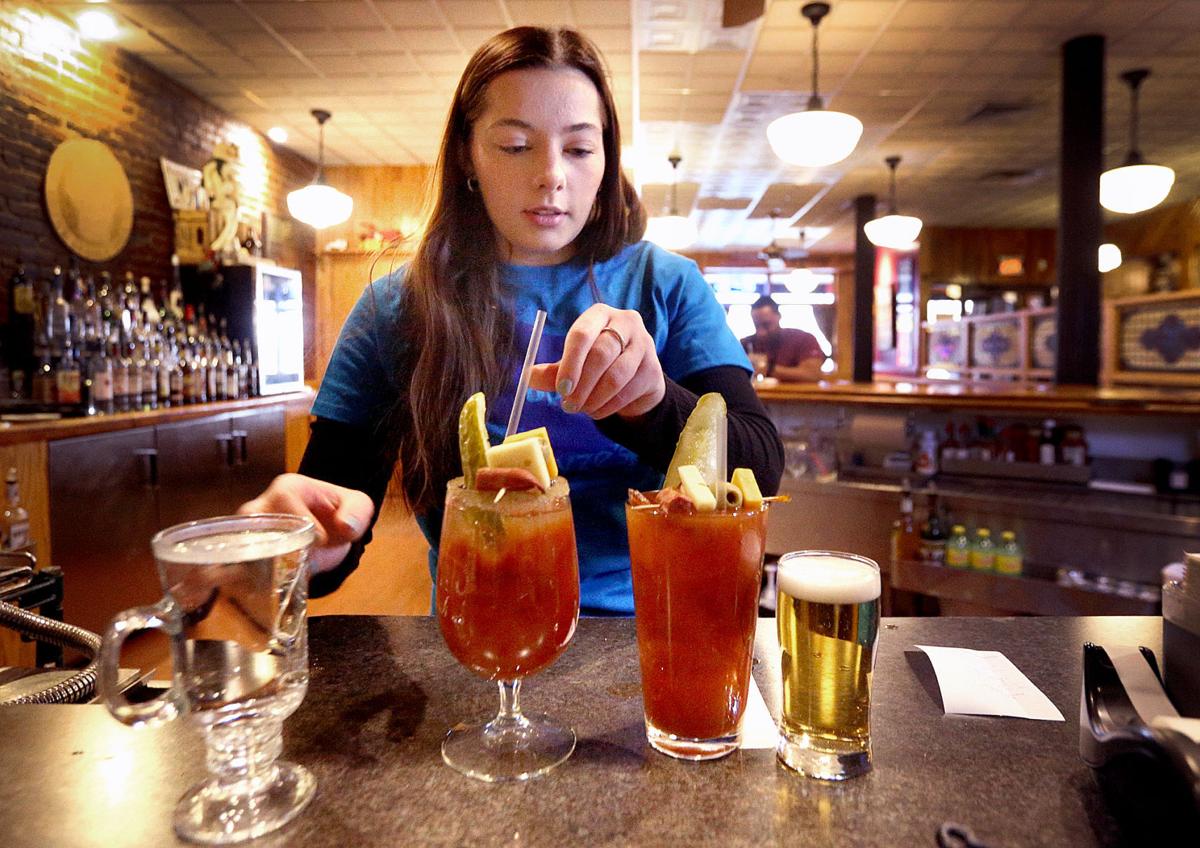 Cartney Callan pours a bloody mary Friday morning at Fayze’s. The downtown restaurant, like many local businesses, is struggling to find enough workers due to a labor shortage. 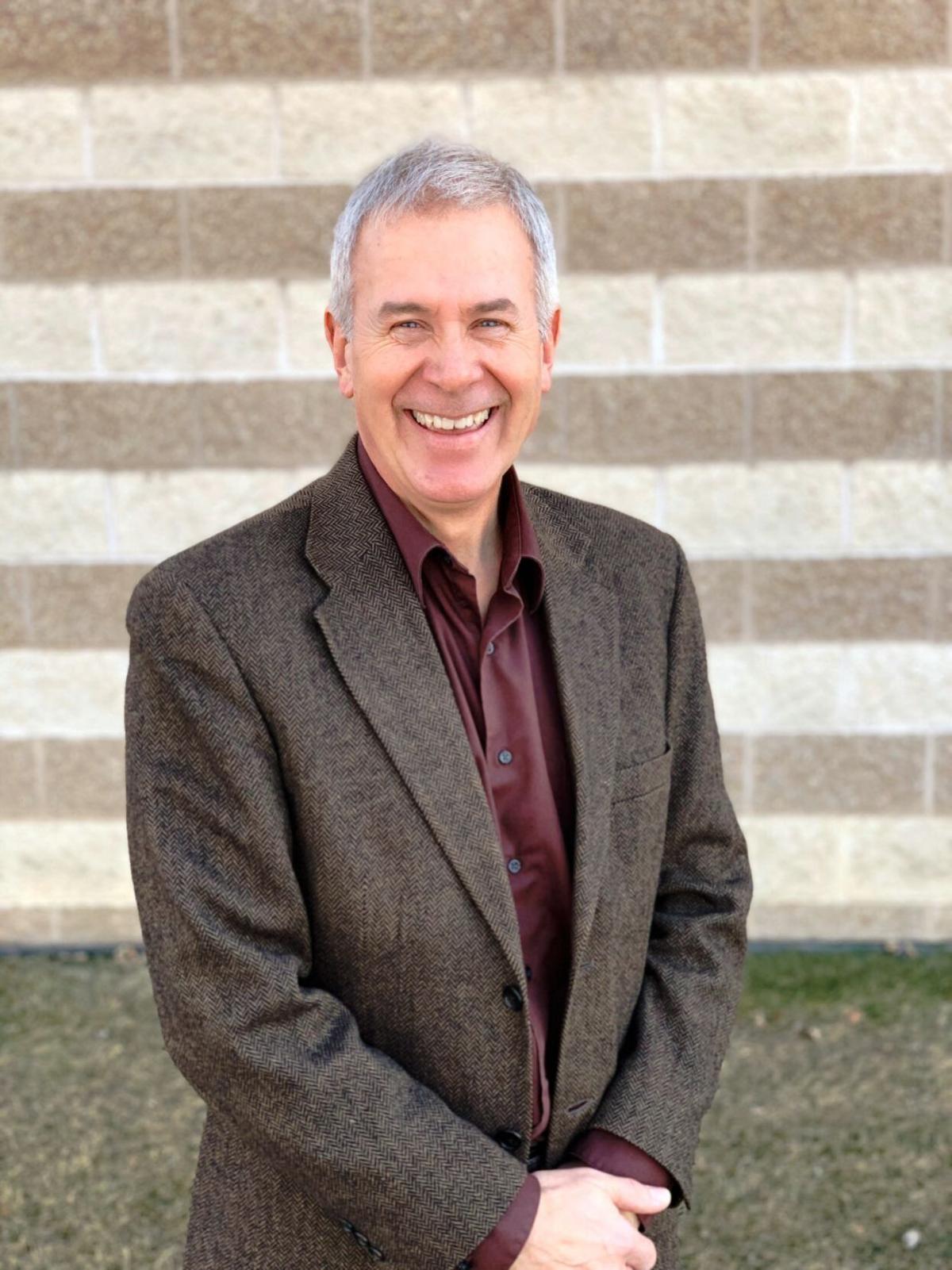 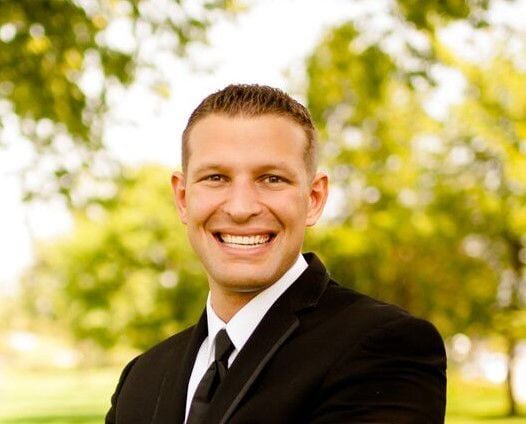 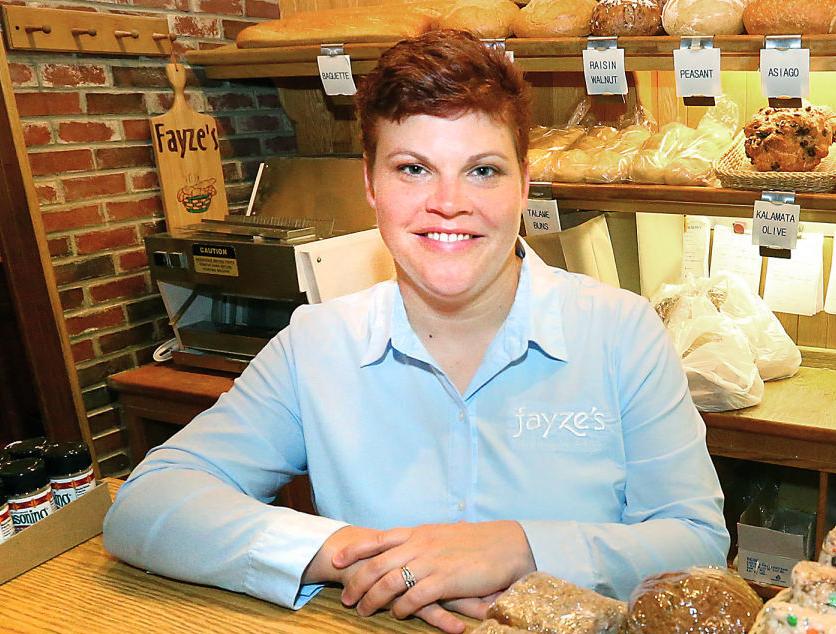