On July 3, 2015, an employee of Tyson Foods was preparing for work at the line 4B tender clipping station at the company’s poultry processing plant in Sedalia, Mo.

The stand slipped, pinching her middle finger between the frame and the processing line. Her finger was amputated between the nail-bed and first knuckle.

Two similar incidents in which a worker’s finger was caught in machinery, resulting in amputation, occurred in Wisconsin poultry processing plants between 2015 and Aug. 31, 2017, according to the U.S. Occupational Safety and Health Administration.

The meat and poultry processing industry had the eighth-highest number of severe injury reports of all industries in 2015, according to a 2017 Government Accountability Office report. And in 2016, poultry processing alone had a higher rate of injury and illness than logging, coal mining and oil and gas extraction, according to data from the Bureau of Labor Statistics.

Wisconsin has dozens of small and medium-sized plants and major companies such as Brakebush Brothers, Jennie-O Turkey Store and Pilgrim’s, formerly known as Gold’n Plump. The largest Wisconsin poultry processors reported eight serious injuries since 2015, according to OSHA, including two finger amputations and one person who possibly succumbed to heat.

Although the meat and poultry processing industry’s injury rate has been dropping for years, it remains higher than average for manufacturing, and vast numbers of injuries never get reported in the first place, according to a 2016 GAO report.

For the over 300,000 poultry workers in the United States can mean working at blistering speeds to satisfy the country’s colossal appetite for chicken. In 2016, the average American ate almost 90 pounds worth, and companies large and small collectively slaughtered more than eight billion birds the same year.

Nationwide, Tyson Foods, Inc. is the biggest and arguably most recognizable player in the industry: The company supplies poultry to Walmart, Kroger and Taco Bell, to name a few. Tyson does not have any poultry processing plants in Wisconsin but does operate plants in Green Bay and New London that produce finished food products, said Tyson public relations manager Derek Burleson.

Tyson produced 174.8 million pounds of ready-to-cook chicken in 2017 and did just shy of $11.5 billion in chicken sales during fiscal year 2017, according to a Watt Poultry USA 2018 report and a Midwest Center for Investigative Reporting calculation, respectively. The company’s prominence makes it representative of many of the issues in poultry processing.

For its part, Tyson has committed to expanding training for its workers and promoting safety in the workplace. The company saw a 22 percent reduction in its OSHA incident rate from 2016 to 2017.

‘Blood splashed on your face’

The plant opened in 1994. The first big influx of immigrants to Sedalia followed a few years later, said immigrants rights advocate Elvira Satterwhite, who founded a local Spanish-language Lutheran church along with her husband in 1999.

“When they first came,” Satterwhite said, “everybody was working at Tyson’s, because that’s the company that brought them here with the promise of low-skilled jobs.”

Outside, one can see — and smell — the chicken-stench-emitting, metal-pipe-bristling behemoth that makes up the sprawling plant.

Countless pieces of chicken go down the line at a speedy clip: breasts, tenders and full birds. Jacqueline Menjivar is one of the workers. Although her mother, a Guatemalan immigrant, did not want her to follow in her footsteps and work at Tyson, Menjivar, now 20, has been there for a year and a half.

Menjivar works as an eviscerator, where she checks chicken carcasses for tumors and pulls the guts out of any dead birds that machines miss. The job, Menjivar said, is “pretty gross.”

“Say you have a ‘hang back,’” she said. “That means you have to pull the guts out manually with your hand out of the chicken. And sometimes if they’re full, their intestines might get poop all over everywhere. So it’s kind of nasty. And blood. You’ll just get blood splashed on your face.”

While this gear protects workers from injuries, wearing it can be unpleasant as workers sweat, sometimes causing skin problems, said Suzanne Gladney, an immigration attorney and founding member of the Migrant Farmworkers’ Assistance Fund, based in Kansas City, Missouri.

Gladney spent 39 years with Legal Aid of Western Missouri, where she practiced immigration law and met frequently with poultry workers. She said the smell of processing plants can be overwhelming.

“It’s sort of in your pores, in your body, where you’re working, and it’s something that’s with you all the time,” Gladney said.

In the evisceration department, that smell is often strong enough to cause employees to seek transfer to other departments after working for two or three days, Menjivar said.

“A lot of people can’t stomach it,” she said.

Satterwhite said she has heard that working conditions in Tyson have improved, mirroring the decline in reported injuries in past years. But injuries remain a problem throughout the industry.

Jessica Leibler, an environmental health professor at Boston University who has researched workers in the animal and food industries for more than 10 years, called it “inherently a dangerous work environment.”

Contributing to this danger are inconsistent worker training practices across the industry, said Lance Compa, senior lecturer at Cornell University’s School of Industrial and Labor Relations. Compa is author of a 2005 Human Rights Watch report describing the alarming working conditions plaguing the meat and poultry industry.

Language barriers pose an additional challenge to proper training. In two plants investigated by the GAO in its 2016 report, workers spoke at least 20 different languages.

“They need training in the language that they speak,” Leibler said. “Sometimes that’s provided, sometime’s that’s not provided.”

Menjivar said she felt prepared to start working after completing Tyson’s training, which included a week of watching safety videos and shadowing an experienced worker. Burleson said the company has hired more than 260 trainers and 30 training coordinators since 2015.

Severe workplace injuries — “crushed fingers or hands, amputations, burns or blindness” — can result from moving machine parts that workers use, according to a 2016 GAO report. The report mentioned one meat and poultry worker who lost most use of her arm after her apron “caught in a machine, which pulled her arm in before the machine could be turned off.”

Almost two-thirds of cutters and over half of all deboners and hangers reported being injured on the job, according to a report by the Northwest Arkansas Workers Justice Center examining working conditions in that state’s poultry processing plants, where Tyson is based.

The GAO also raised concerns about workers’ access to bathrooms in a 2017 report, saying workers in five states cited bathroom access as a concern but were afraid to report it to visiting OSHA inspectors. Denial of timely bathroom breaks can cause hemorrhoids, urinary tract infections, constipation and abdominal pain.

At Tyson, Burleson said employees can leave the line to use the restroom when needed, adding that some plants allow workers one 30-minute unpaid break or more per eight-hour shift, while others have two breaks of more than 20 minutes.

“Somebody will come take your spot, and you can go to the bathroom, get a drink,” Menjivar said. “And those are like, 10-minute breaks.”

‘As fast as the human body can withstand — and even faster’

Many worker injuries can be traced to the “line,” the conveyor belt that zooms birds from station to station, taking them from live chickens to cut-up pieces. Tyson’s Sedalia plant kills around 200,000 birds per day, according to Menjivar. Tyson would not confirm this number.

Critics have called the fast pace of these lines one of the more dangerous parts of working in poultry processing. Menjivar said the Sedalia line moves at 148 birds per minute. Burleson did not confirm the speed at which Tyson operates its lines.

The U.S. Department of Agriculture is the agency responsible for regulating line speeds and currently caps the maximum number of birds a plant can process at 140 per minute. Processors can apply for waivers that allow for a speed of up to 175 birds per minute.

“I think the line speed is quite fast, in my view — too fast for a human worker to do the task that they need to do and keep up,” Leibler said.

On the line, repetitive, high-speed movements can combine with awkward body positioning and cold environments to put workers at risk of developing a musculoskeletal disorder and injury, according to a 2016 GAO report.

The USDA regulates line speeds based on food safety, not worker safety. Maria Machuca, public affairs specialist for the USDA’s Food Safety and Inspection Services, said in an email that line speeds were set based on how quickly inspectors could check chicken carcasses. Modern verification tests have been added to test for pathogens, she added.

Burleson said Tyson’s policy and practices “encourage plant team members to stop the line at any time for worker or food safety issues.”

Line speeds have drawn the attention of activists and workers rights’ groups. Leibler said. Legislative efforts to slow down the line have not been successful.

Despite several groups petitioning in 2013 for OSHA to create a workers safety standard relating to animals processed per minute, the agency declined, citing insufficient resources. 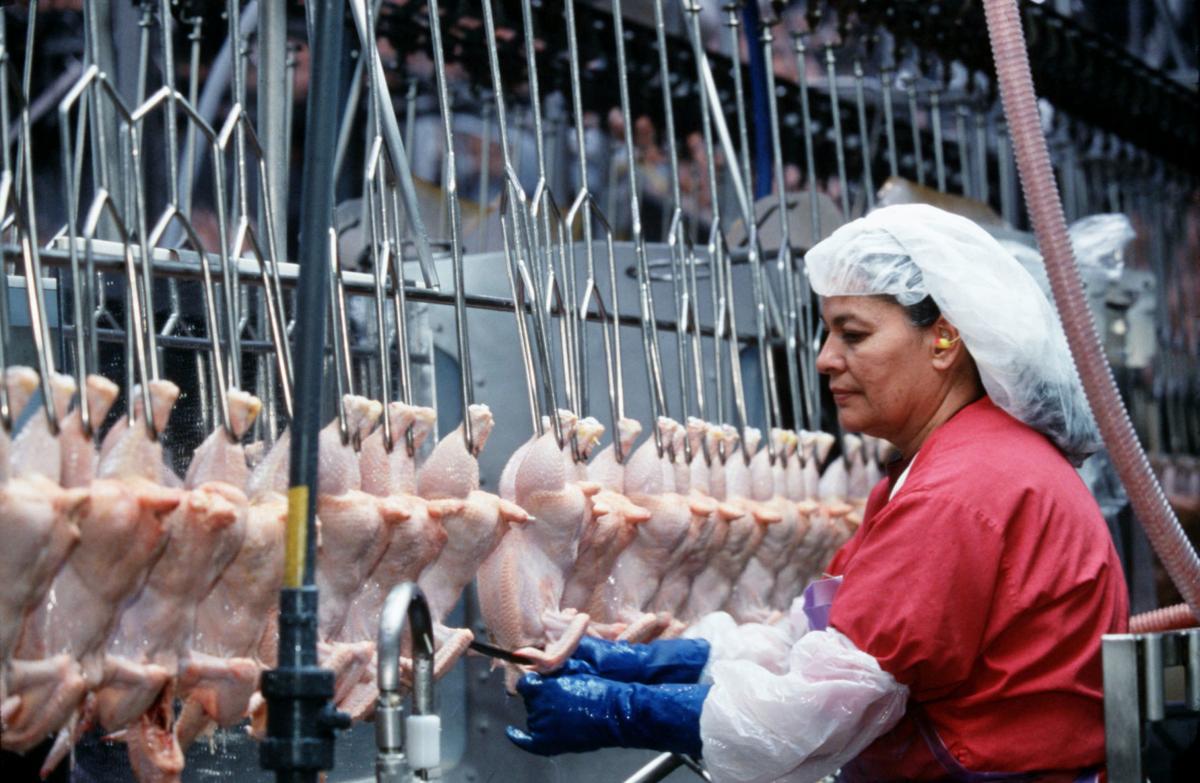 An employee of Tyson Foods processes chicken at a plant in Springdale, Ark., in this 2002 file photo. The poultry processing industry has a higher injury and illness rate on average than manufacturing overall, but safety has improved in recent years. 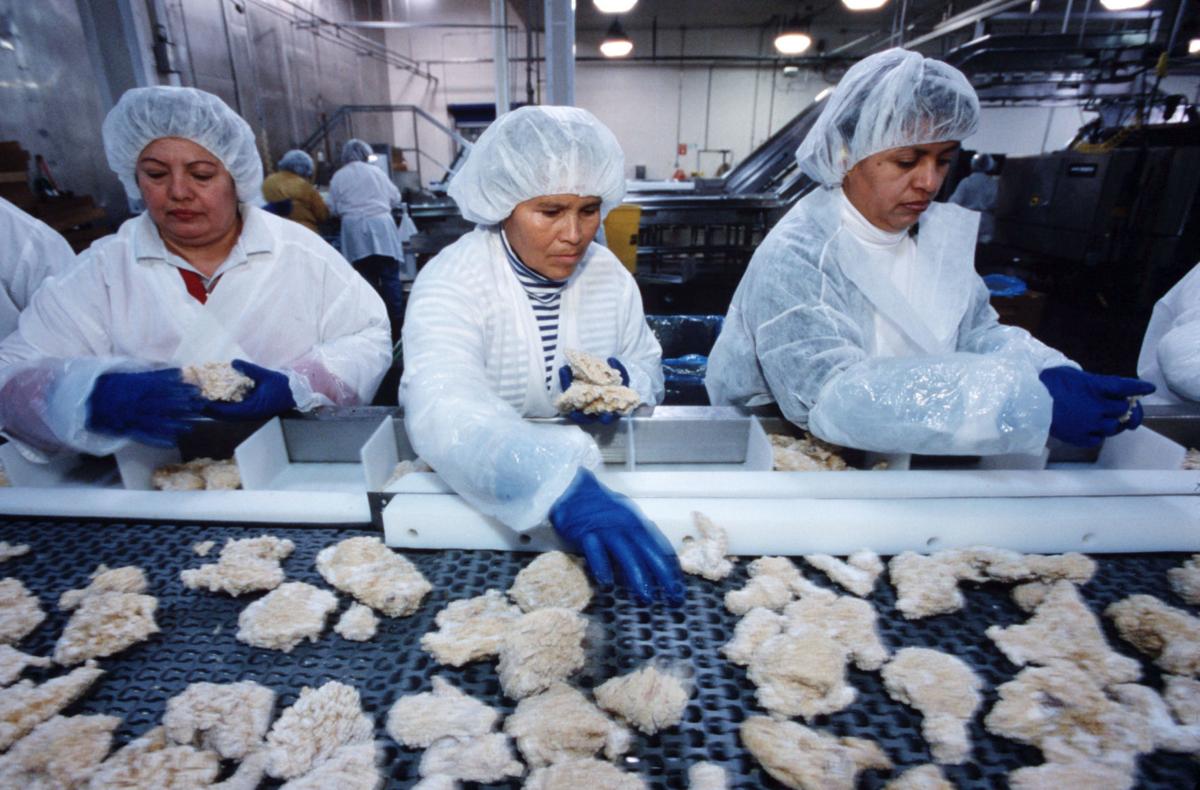 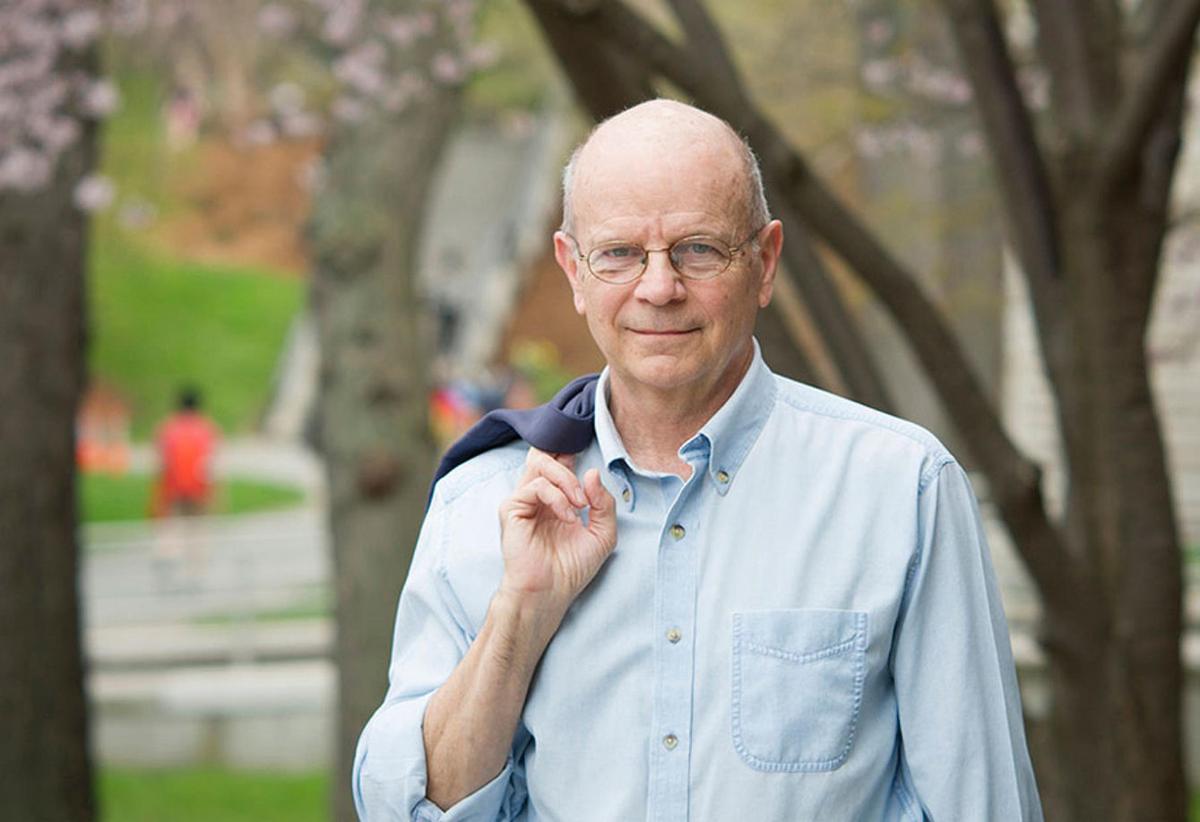