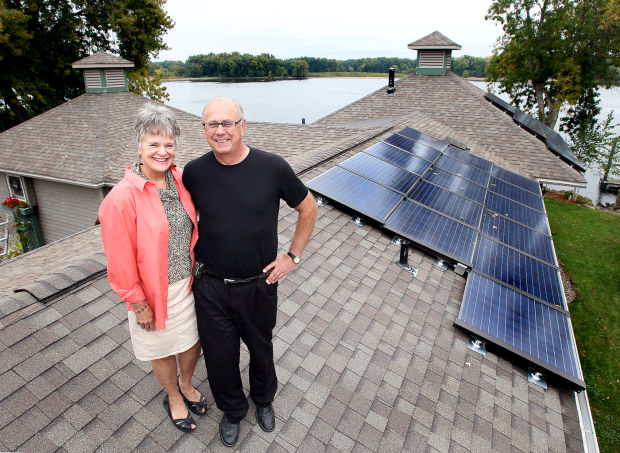 Barb and Bud Hammes last year installed an array of solar panels on their Mississippi River home. The panels now generate 120 percent of their electricity use. Erik Daily 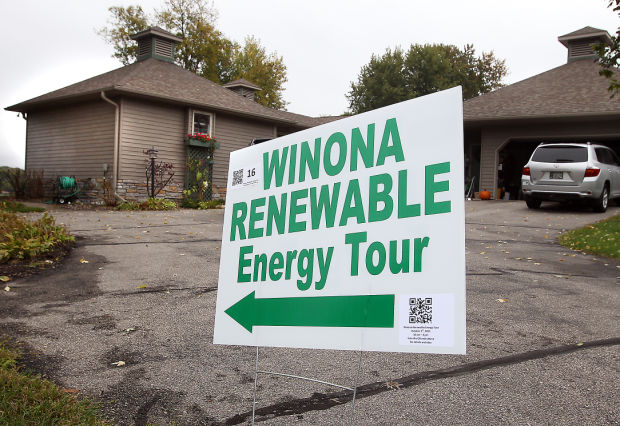 Barb and Bud Hammes are among 17 area residents and businesses that will be featured in Saturday's renewable energy tour. Erik Daily

But it’s not because the lights are out in his Rose Street business. As his website says, Sir Speedy is not a typical print shop. A sign on the front of the building proudly proclaims: “100 percent solar powered.”

From his desk, Fisk can see how much energy has been generated by the rooftop solar panels. In fact, so can anyone who visits his website, www.laxprint.com, which runs software that monitors the panels and displays their output in 15-minute increments.

“We try to get (them) as much information as possible,” Fisk said. “Just so people can see it’s feasible. It does work.”

Fisk will open his store today as one of the 17 stops on the Winona Area Renewable Energy tour, a free self-guided tour of homes and businesses throughout the Coulee Region using locally-generated energy.

Sites on the tour range from entirely off-the-grid homes to small businesses like Sir Speedy and major projects, such as Gundersen Health System’s 2.5-megawatt wind turbines in Lewiston, Minn.

The tour was organized by Chris Meyer, a retired software developer and self-described techie who installed a 2.8-kilowatt solar system on her Winona home in 2009.

“The whole point would be if you’re thinking about or interested in a system, you don’t have to talk to a salesman,” Meyer said. “You can talk to someone who actually has one.”

In 2006, when Fisk moved his business to the current location, he added as much insulation as he could. He converted to high-efficiency LED lighting in 2012.

He made the big change in December, installing 159 solar panels that cover virtually the entire 4,000-square-foot roof and generate up to 40 kilowatts of electricity.

More than half the cost was covered by $110,000 in federal rebates and a grant from Focus on Energy. Fisk’s out of pocket cost was about $75,000, which he expects to recoup over about 10 years.

Fisk said his motivation was part environmental and part financial.

“Now the price of solar is like half what it was,” she said.

With those prices and the $1,500 per kilowatt rebates available in Minnesota, Meyer said a typical home system can pay for itself in about seven years.

Those in Wisconsin aren’t quite as lucky.

Wisconsin’s Focus On Energy allocates only 25 percent of its renewable energy grants to solar and wind projects, and offers only $600 per kilowatt with a 4-kilowatt cap.

Still, when electric rates are higher than 12 cents per kilowatt hour — as Xcel Energy’s are during summer months in La Crosse — solar panels can save you money, said Tim Gulden, owner of Winona Renewable Energy.

Minnesota’s rebate incentives begin phasing out after 2014, so Gulden said now is a good time to get in. The rebate application periods in both Wisconsin and Minnesota opens Jan. 1.

Gulden said businesses account for a growing share of his clients as they look to solar to help with the bottom line and public relations.

But residential customers still account for about half his work.

Barb Hammes said she’d long been fascinated with solar power and the idea of local production, which avoids the loss of energy in transmission.

“We have been into conserving energy our whole lives,” she said. “This just seemed to take it the next step further.”

Within a month of installing the panels, their electric bill had gone negative.

“We get a check every month,” Hammes said. “It’s not a huge check, but it’s better than sending them a huge check each month.”

A home in the town of Holland is one of dozens of Wisconsin homes and businesses on the 17th annual National Solar Tour, the world’s largest g…

Barb and Bud Hammes last year installed an array of solar panels on their Mississippi River home. The panels now generate 120 percent of their electricity use. Erik Daily

Barb and Bud Hammes are among 17 area residents and businesses that will be featured in Saturday's renewable energy tour. Erik Daily