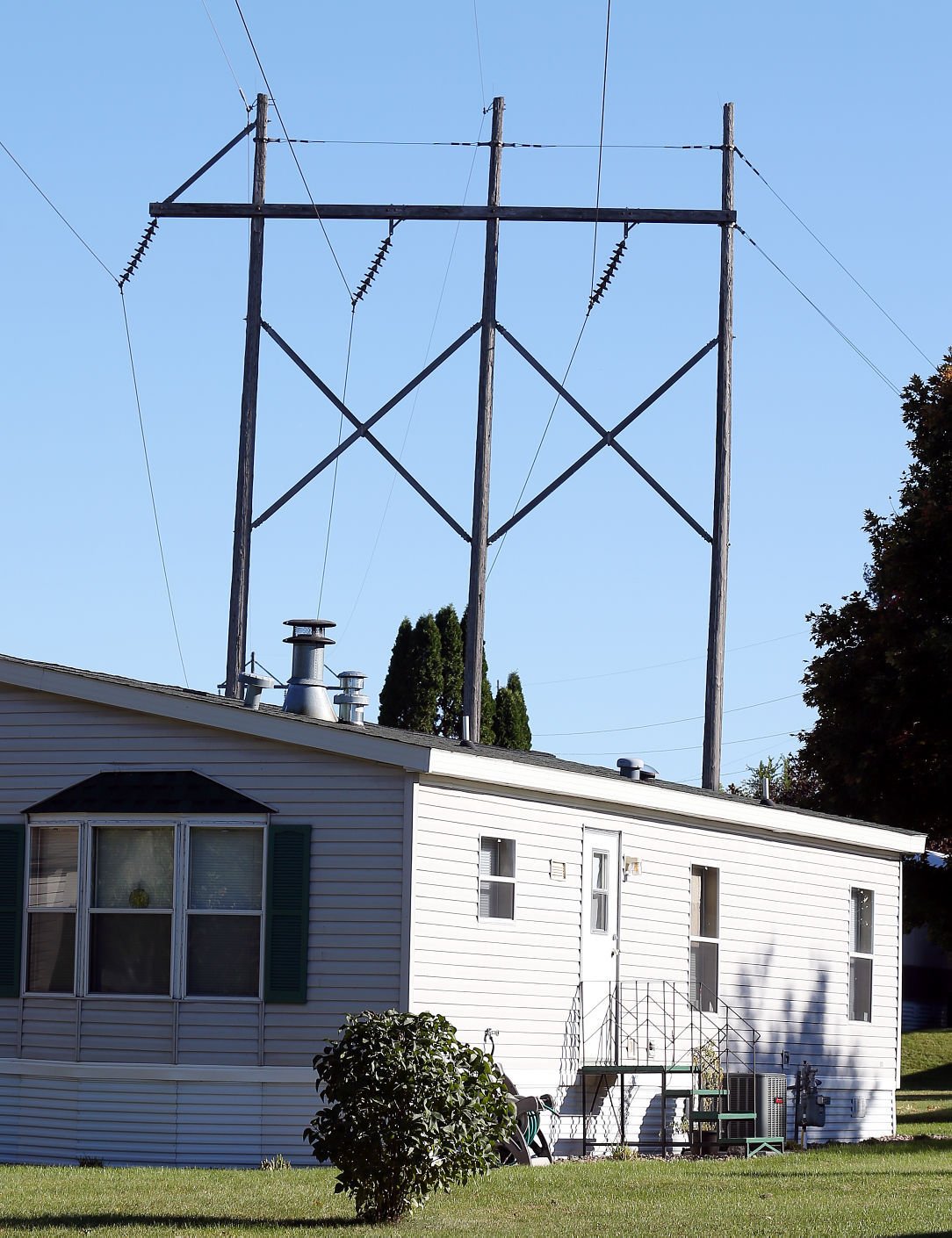 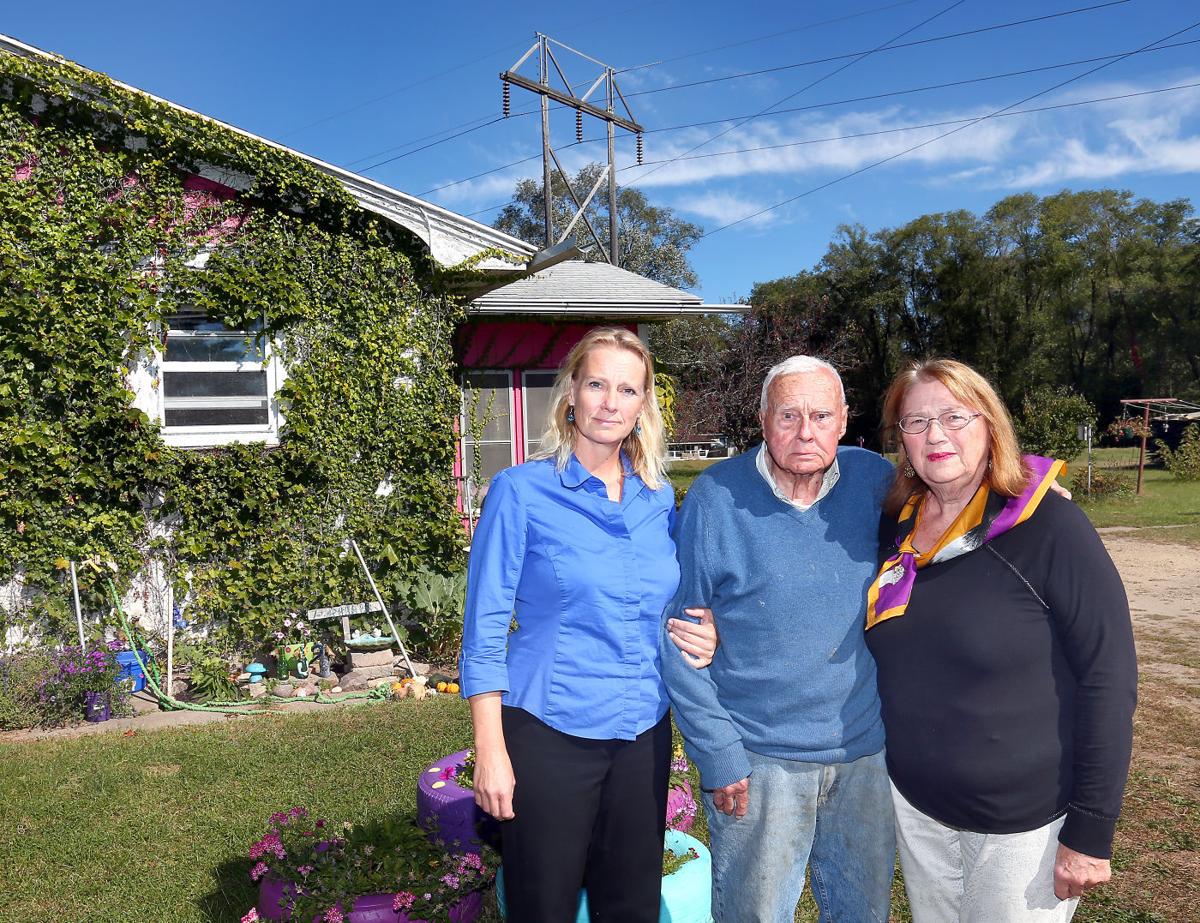 TOWN OF ONALASKA -- Dairyland Power Cooperative's plans to replace a 65-year-old power line have raised concerns of residents living near the high-voltage line.

Originally constructed in 1950 through farmland, the 161-kilovolt line now cuts through back yards and in some cases directly over homes that were built around it as development pushed north, first along the Hwy. 35 and later the Hwy. 53 corridor.

Some residents worry about the health effects of living so close to the line -- especially if Dairyland is able to push more electricity through it.

Darlene Adams lives directly under the lines in a mobile home on Kimberly Street and says she can hear them crackle when it rains or snows.

“It sounds like water on a frying pan,” Adams said.

Adams said she didn’t think about the line when she bought the home but has since become concerned about health effects.

“What is it doing to my house?” she said. “I’ve wondered, but no one has contacted me.”

The La Crosse-based utility has been working for most of the past decade to replace the Q1 line, which connects power plants in Alma and Genoa to the electric grid and delivers power to customers in surrounding rural areas.

The segment from Genoa to La Crosse was replaced in 2013, and the majority of the northern section is being rebuilt as part of CapX2020, a new transmission line nearing completion. Work is set to begin this month on a segment north of Holmen.

That leaves a nine-mile stretch, known as Q1-D South, running from Briggs Road in Holmen south into the town of Medary.

Dairyland hopes to begin construction in late 2016, but Chuck Thompson, who is in charge of siting and regulation for Dairyland, said designs for the replacement line are not complete.

In general, plans call for 95- to 115-foot steel poles to replace the existing wooden H structures, which range in height from 55 to 85 feet, although the company will need special clearance for some poles in the flight path of the La Crosse Regional Airport.

The estimated cost is between $7 million and $8 million.

Dairyland also plans to use a larger wire that will be able to carry more than twice as much electricity at the same voltage.

Carol Overland, a Red Wing, Minn., attorney who has fought transmission projects on behalf of citizens and ratepayers, said that will result in about twice as much EMF, which Dairyland hopes to mitigate by raising the wires.

A form of radiation given off by electricity, EMF is present anywhere there are electric wires or appliances.

Studies have found possible links between EMF exposure and increased risk of childhood leukemia, but according to the National Institute of Environmental Health Sciences studies have not found links to adult cancers.

There are no federal regulations on EMF levels in homes, though the NIEHS recommends reducing exposure.

Michael Yeager said his daughters, now 33 and 37, grew up playing under the wires, which cut through his yard. he suffers from multiple sclerosis, and one of his daughters has a tumor in her knee.

“I really wonder if something’s going on here,” he said. “Now they’re planning on getting bigger yet.”

Dairyland provides EMF monitoring at the request of people living near its lines but the utility does not retain that data, nor has it modeled the likely emissions from the rebuilt line.

Thompson said such modeling is not required.

“The RUS does not require us to do that,” he said. “The (state) requires it in their analysis. The federal process does not.”

Ann Kathan recently moved her family into a cottage next the home where she grew up on County Road OT. She planned to raise her 6-year-old twins there while caring for her aging parents, Lois and Bob.

But since learning about Dairyland’s plans to rebuild the line about 70 feet from her kids’ bedroom, she’s become concerned about the potential health effects of EMF.

She opposes the rebuild and plans to move unless the line is removed.

“In good conscience we cannot live in that house,” she said. “This is devastating.”

Federal money, but no state permit

Kathan, who has been contacting residents along the line in an effort to rally opposition, said Dairyland has been less than transparent, giving little information about the plans or the process.

Overland was frustrated that Dairyland ran a legal notice in the La Crosse Tribune on Aug. 28 -- with two paragraphs describing the project and an illegible map -- without publishing any additional information about the project.

“There's no application on line, nothing for anyone to look at and figure out what's going on and then comment on,” Overland said. “What's the point of making comments if we don't know the plan?”

Because Dairyland is replacing an existing line, the utility does not need permission from Wisconsin regulators. But in order to receive low-interest financing from the U.S. Department of Agriculture, Dairyland must submit an application to the Rural Utility Service, which will determine what level of environmental review is necessary.

Thompson said the RUS application process requires Dairyland to collect public comments before submitting the application, which is why it was not available.

Dairyland has since agreed to extend the public comment period until Oct. 13, is publishing a second legal notice and has posted maps and basic information about the project on the company’s website.

State Sen. Jennifer Shilling and Rep. Steve Doyle, whose district is crossed by the line, said they’ve heard from concerned constituents but are limited in what they can do, because the project is not subject to state authority.

Both lawmakers said they encouraged Dairyland to listen to residents’ concerns.

Some residents along the line would like Dairyland to consider an alternative route -- along Hwy. 35 or Hwy. 53 -- or running it along the same poles as Xcel Energy’s 161-kv line that also bisects the area.

Chuck Thompson, who is in charge of siting and regulation, said the other routes present problems -- Hwy. 35 has scenic easements, right-of-ways that extend into front yards, and is in the airport flight path; combining routes is also a challenge.

“When you start combining transmission lines the height goes up,” he said “It gets more difficult to put these lines together.”

And to move the line Dairyland would need permission from the Wisconsin Public Service Commission.

Thompson said burying the line -- another common suggestion -- would cost about 10 times as much.

“It’s difficult any time you’re in a city to route transmission,” Thompson said.

Dairyland could not provide the number of home within 300 feet of the line, but a Tribune analysis found the line crosses 142 developed residential properties and at least another nine multi-family properties with 84 apartments.

It crosses another 31 developed commercial properties, according to the Tribune’s analysis.

Much of the development occurred in the 1960s and 70s, prior to state statute that prohibits utilities from running anything higher than a 35kv line over a residence -- or the construction of a residence under an existing line.

Kurt Childs, Dairyland’s director of land and design services, notes that homes built within the 80-foot right-of-way were constructed in violation of the company’s easement.

Who -- if anyone -- signed off on such plans is not clear.

“It really is a perfect example of a lack of urban planning,” Doyle said. “To have a mobile home directly under an existing line seems to me ludicrous.”

Kathan objects to the rebuilding project and thinks Dairyland should relocate the line away from the homes that were built around it, arguing that they are responsible for acting on new information about EMF.

“There really was not a choice,” she said. “People did not choose to be bombarded with EMF, because they did not know.”

Dairyland Power Cooperative is planning to rebuild about nine miles of 161-kilovolt transmission line, which runs from Briggs Road in Holmen through the city and towns of Onalaska and into the town of Medary south of the La Crosse River.

A fact sheet and maps of the project are available on Dairyland's website, at http://www.dairynet.com/power_delivery/project_updates.php.

Dairyland is accepting public comments until Oct. 13 to be forwarded to the U.S. Department of Agriculture's Rural Utilities Service, which will oversee the environmental review of the project.

“It really is a perfect example of a lack of urban planning. To have a mobile home directly under an existing line seems to me ludicrous.”

HOLMEN — The Sikorsky S-64 Air Crane thumping through the skies over Holmen this week is no ordinary helicopter. Used for fighting forest fire…