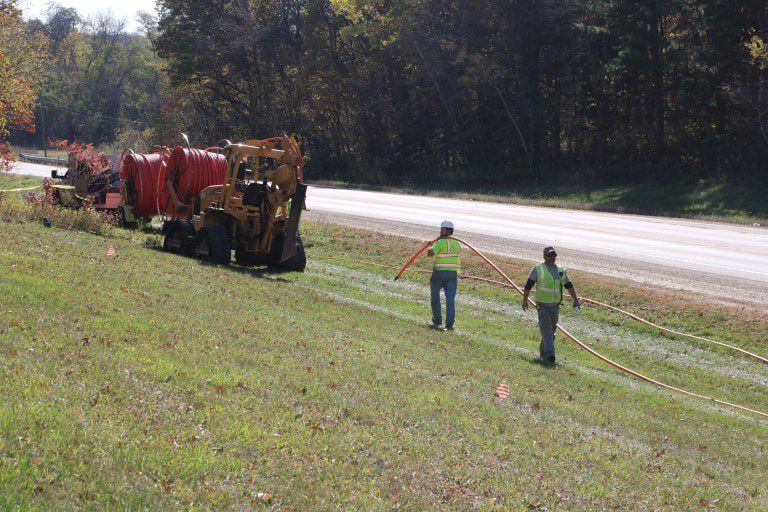 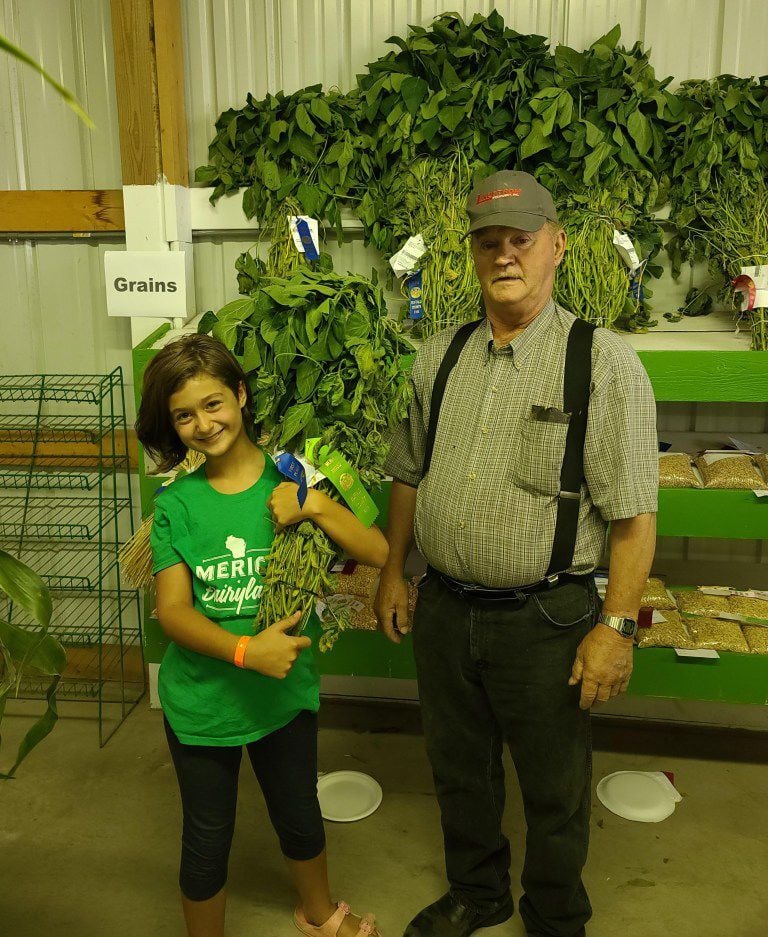 Ed Risler, chair of the Drammen Town Board, with his granddaughter Bella at the Buffalo County Fair in August. Courtesy of Lacy Bork. 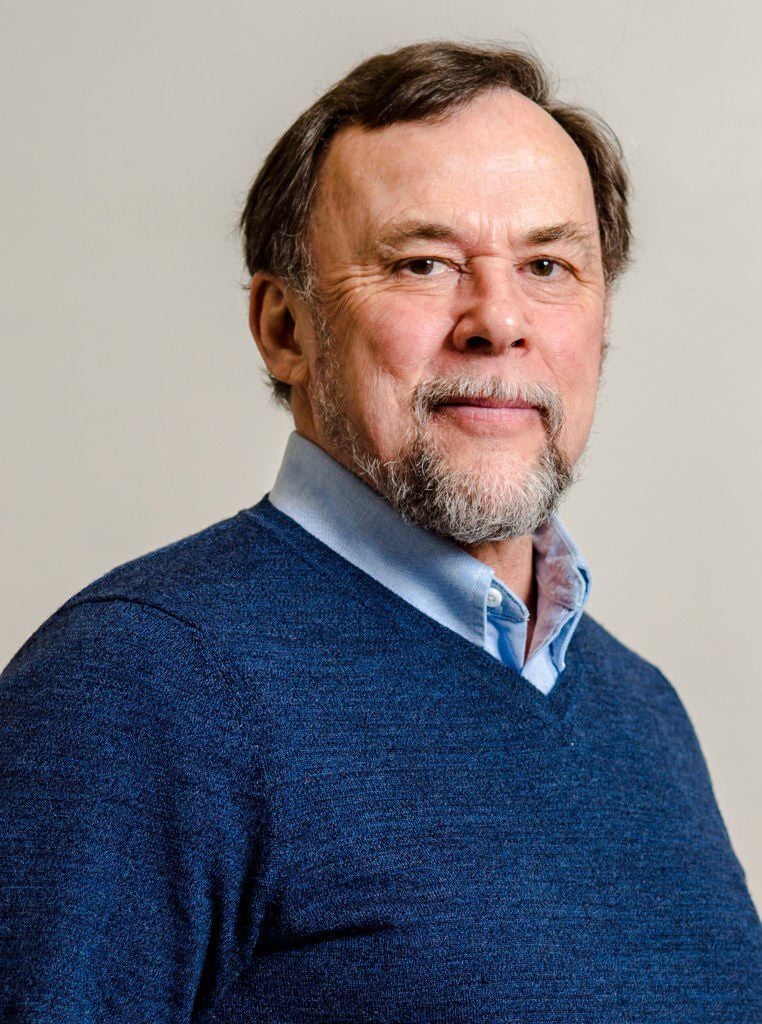 Ed Risler, 71, doesn’t use the internet much, but his granddaughter sure does.

When school shut down during the pandemic last year, 10-year-old Bella spent school days at her grandfather’s while her mother was at work. With a home deep in the rolling hills of western Wisconsin’s Driftless Area, his internet speeds are “piss poor,” says Risler, the chairman of the town board in Drammen, a rural community between Mondovi and Eau Claire. While many kids in the state could do their work digitally, Drammen’s poor internet speeds meant Bella had to get paper assignments from school.

“I knew we needed it in the township,” Risler says. “We needed to do something.”

Risler and the whole community of Drammen will soon have high-speed internet, also known as broadband, thanks to the fiber optic cables two local cooperatives, Tri-County Communications Cooperative and 24-7 & West Wisconsin Telcom, are burying in the ground right now.

The town of around 800 residents is able to afford the nearly $3 million project thanks to a state grant of $1.5 million, and $200,000 from the American Rescue Plan Act (ARPA), the $1.9 trillion economic stimulus bill President Joe Biden signed into law in March.

The pandemic shutdown made the already pressing issue of high-speed internet expansion a priority, as children and adults in rural areas struggled to study and work from home. If they didn’t already, local governments are now realizing the importance of broadband for improving quality of life and the local economy, including retaining existing businesses and residents and attracting new ones.n response, the federal and state government are showering rural broadband projects with cash. Since the start of the pandemic, Congress has passed three huge spending bills — The CARES Act in March 2020, the Consolidated Appropriations Act in December and ARPA in March of this year — each including millions that can be used for broadband expansion.

According to Wisconsin Public Service Commission (PSC) chair Rebecca Cameron Valcq, nearly 400,000 households in the state, most of them rural, lack access to high-speed internet access. Valcq estimates the cost of bringing it to all of them could be about $700 million.

Christopher Mitchell, director of the Community Broadband Networks Initiative, a Minnesota-based think tank that helps communities with their telecommunications, estimates Wisconsin will receive between $600 million and $1 billion in total for use in high-speed internet expansion.

Down this road before

But, Mitchell says, the programs were poorly designed and poorly enforced, allowing the big companies to funnel the money into areas that were most profitable: cities and suburbs with high population density. Rural areas were ignored.

Some providers have been accused of misrepresenting the quality of their product, giving the impression that the internet speeds provided were higher than they actually were.

Frontier, which provides service to about 80,000 Wisconsinites, received more than $180 million in federal funding between 2015 and 2020 for projects in Wisconsin alone. The company then declared bankruptcy in 2020. In May, the Federal Trade Commission (FTC) along with law enforcement agencies from six states, including Wisconsin, sued the company for misrepresenting internet speeds. A judge has dismissed the claims of Wisconsin and four other states, but allowed the suits from the FTC and California to continue.

Brigid Smith, a spokeswoman for Frontier, says the company’s bankruptcy did not affect the company’s commitment to fulfilling its obligations with the federal funding. Regarding state funding, Smith says Frontier has received broadband grant funding in numerous states “and has fulfilled its grant obligations in all of them.”

As of October, Frontier still finishes near the bottom of a ratings survey of telecommunications companies by Consumer Reports, and the Better Business Bureau gives the company a grade of F.

At the state level, before Wisconsin Democrats broke Republicans’ complete control of state government with Gov. Tony Evers’ win in 2018, the GOP budgeted what experts call a pittance for rural broadband expansion: $20 million in the program’s first years between 2014 and 2019.

The American Rescue Plan Act (ARPA) sent checks directly to every state, county and municipality in the United States, but put restrictions on how the money could be used. High-speed internet is one allowable item, and Gov. Evers and local governments are taking the suggestion.

This summer, the governor set aside $100 million in federal funds in a first round of a competitive grant process for broadband expansion, giving priority to projects in areas “with the least access or slowest speed and the highest need.” At the state level, the budget for the next two years also sets aside an additional $129 million for broadband expansion grants, doubling the previous budget.

As of October, the state has awarded about $100 million, mostly to smaller internet providers, but received more than $420 million in applications.

In order “to help guide funds to areas where it is needed most,” the PSC awards grants based on criteria including the current availability or lack thereof in an area, as well as the proposed speeds and matching funds of the project, says Jerel Ballard, a spokesman for the commission.

According to recent research, major investments could produce major returns. A 2018 study on rural broadband from Purdue University found that every dollar invested in internet expansion by the Tipmont Rural Electric Cooperative, a utility cooperative in eastern Indiana, returned nearly $4 in net benefits to the area in places like telemedicine, education, consumer savings and farm income.

And for better or worse, internet speeds can have a strong effect on real estate markets.

It has become “one of the key factors that people consider when deciding where to buy,” says Tom Larson, a senior vice president at the Wisconsin Realtors Association. “I’ve heard instances where it can affect the value by anywhere from 10-25%. It’s a big factor.”

Some counties and municipalities are moving aggressively to take advantage of the public cash.Drammen is fortunate that it sits in Eau Claire County, which has an active broadband committee aimed at improving coverage for residents in the topographically-challenging region.

“When we first started we had a lot of ideas, but no money,” says Donald Mowry, a county supervisor and chair of the committee. “Now we have more money than we know what to do with.”

The county got more than $20 million in ARPA funds. The broadband committee set aside nearly $3 million of that cash and is offering matching grants to municipalities who use their own ARPA funds to improve high-speed internet.

Drammen got their $90,000 in ARPA funds matched by the county. The nearby town of Brunswick also got their $176,000 in funds matched on top of a state grant to improve their internet infrastructure. Mowry says Eau Claire County is hoping more municipalities will put their ARPA funds towards high-speed internet and will apply for state grants.

Way up north, the city of Superior is moving forward with a different model. The city council has plans to build, own and maintain the internet infrastructure, but lease it out to private companies, which will provide the service, says Tylor Elm, a city councilor. Superior is replicating a similar system successfully implemented in Ammon, Idaho, Mitchell says.

In the southwestern corner of Wisconsin, Grant County has broken ground on a fiber optic cable loop which will circle the county and connect the towers in its emergency communications radio network. According to Shane Drinkwater, the county’s IT director, the system is modeled off an existing system in Sauk County, where private internet providers lease use of the infrastructure and hook up homes and businesses to the loop. At a cost of $8 million, Drinkwater says the county will use its nearly $10 million in ARPA funds to pay for it.

Similarly, in Pierce and Pepin counties in northwestern Wisconsin, the energy cooperative Pierce Pepin Cooperative Services is working on a $32 million project to run fiber optic cables in the ground and on its power lines to bring high-speed internet to about 5,500 unserved homes. The company is using state grants as well as federal ARPA funds from municipalities in the service area like El Paso, Ellsworth and River Falls to help pay for the project, says company President and CEO Nate Boettcher.

“Without some investment from the outside, it would be nearly impossible,” Boettcher says.

Elon Musk’s Starlink, which consists of a fleet of satellites beaming high-speed internet down to Earth, has also started delivering service to homes in rural Wisconsin. Matthew Pease, CEO of Northern Antenna, an installation company, has hooked up a handful of Starlink customers in northern Wisconsin. But because the area is so heavily forested, installations can be technically difficult, he says. Other experts are skeptical that the technology can scale up and deliver consistent service to large amounts of customers.

Even if Wisconsin gets most or all of its rural areas hooked up, problems remain.

“Arguably the money is going where it is needed most, but most of the people that want better broadband won’t get it,” Mitchell says. “If you’re on a farm in the Driftless region, and you don’t have any access, you’re probably going to get really good service as a result of the money that’s now available. If you live in a suburb of Milwaukee and you’re fed up with the cable monopoly, you’re probably not going to see any benefits from these broadband expenditures.”

This story was produced in partnership with The Wisconsin Idea, a reporting project of the progressive news magazine In These Times, focused on issues facing the state’s rural communities, and The Badger Project, a nonpartisan journalism nonprofit in Wisconsin.

Ed Risler, chair of the Drammen Town Board, with his granddaughter Bella at the Buffalo County Fair in August. Courtesy of Lacy Bork.