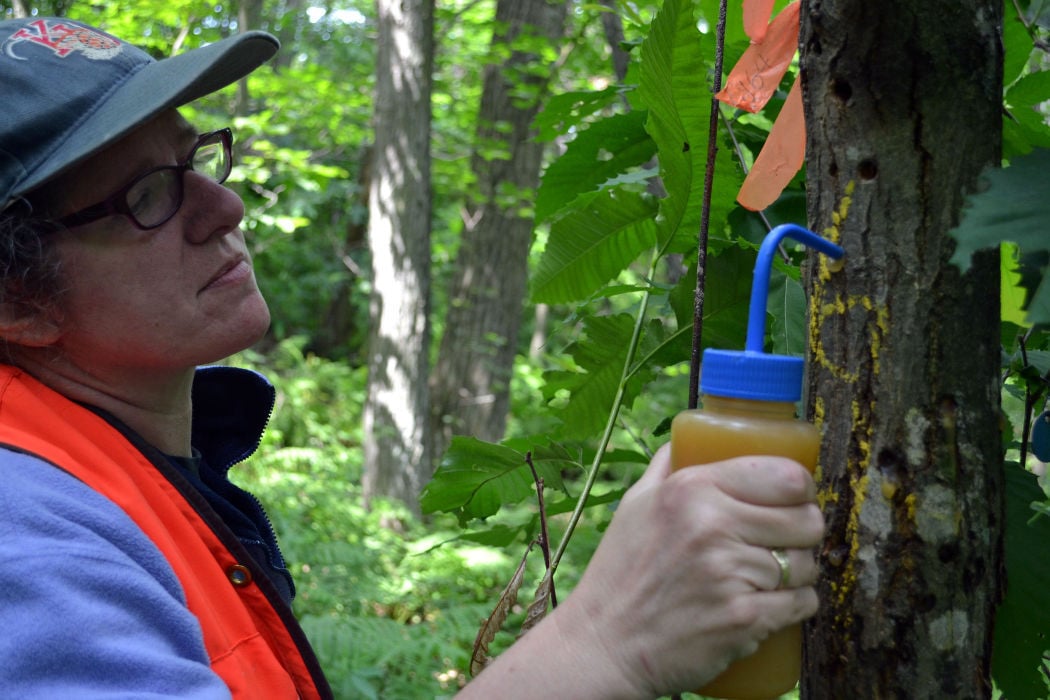 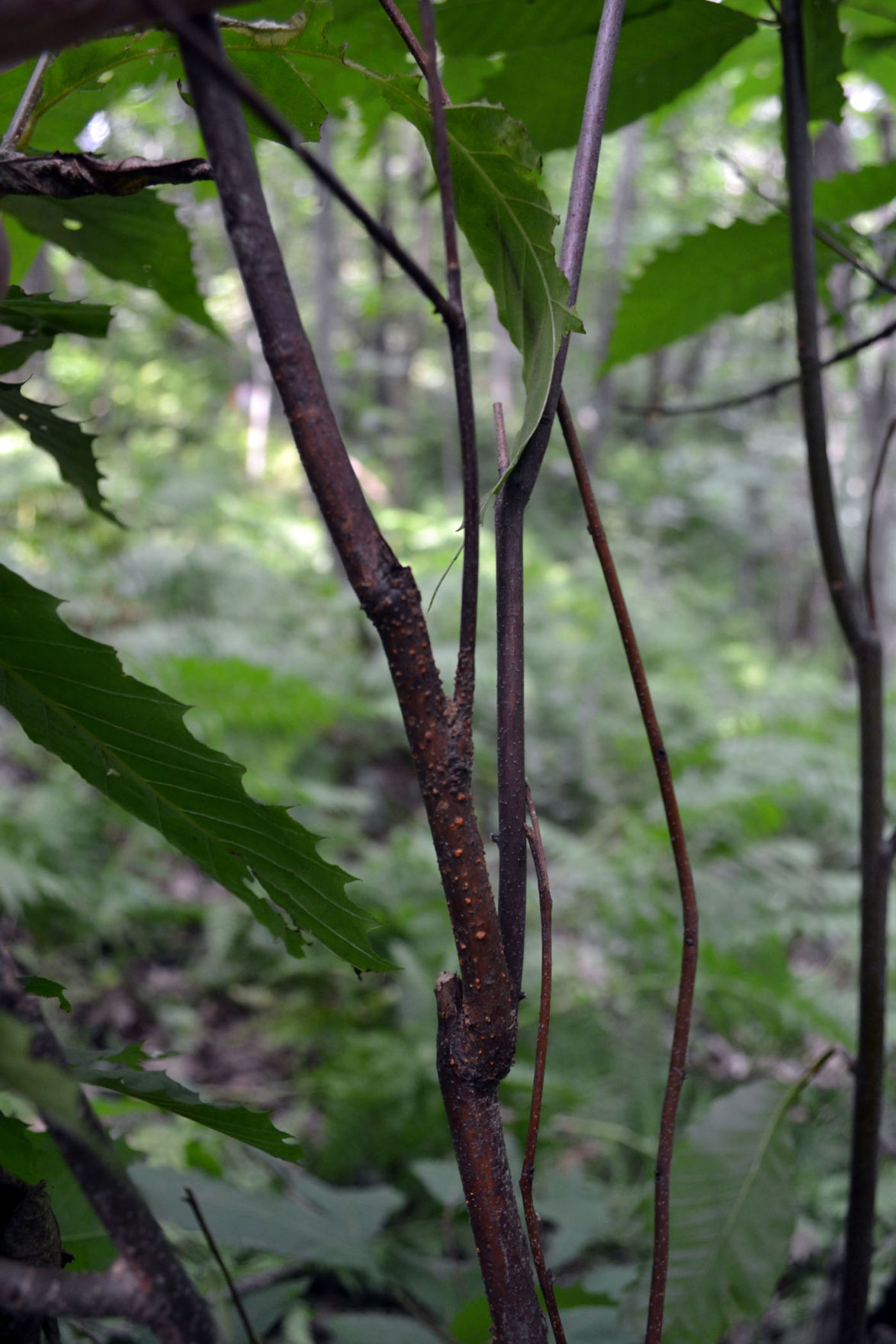 Small, light-colored blisters are a telltale sign of chestnut blight. 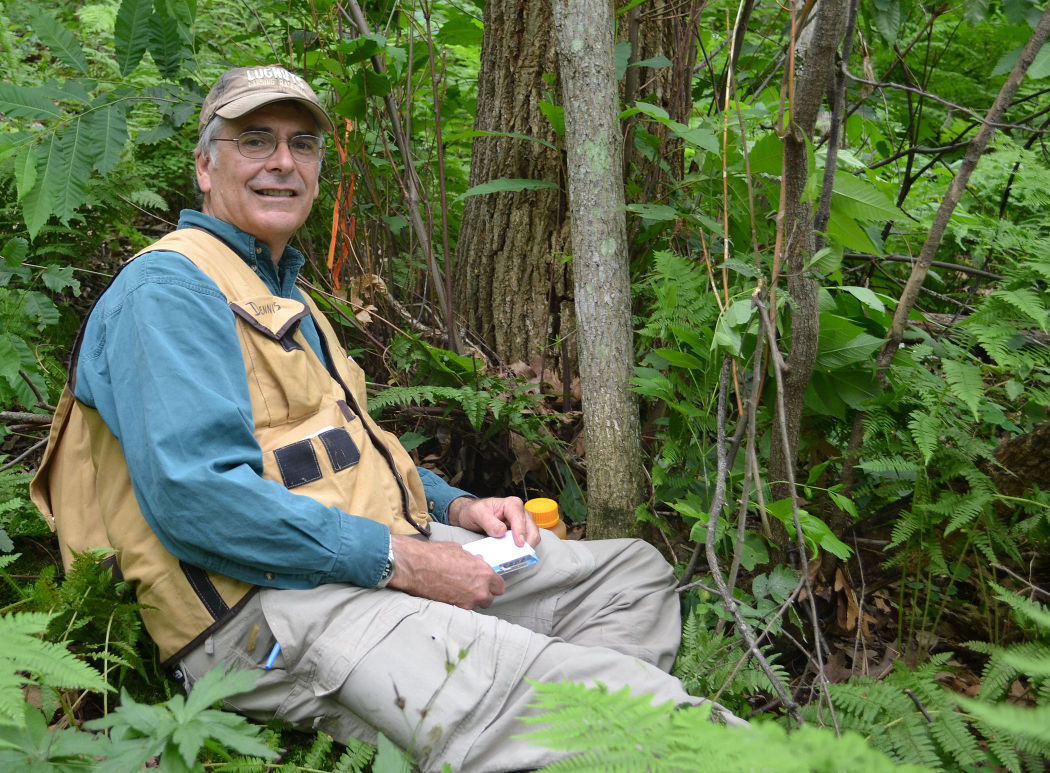 WEST SALEM — Scientists gave a local forest famous for its chestnuts an annual checkup of sorts earlier this month, and the numbers alone wouldn’t tell the whole story.

About 15 scientists and students from the University of Wisconsin-La Crosse, Michigan State University and West Virginia University swatted bugs, swabbed trees and collected samples on a hilly, 90-acre tract spread across land owned by a pair of local farm families and rented for research by the American Chestnut Foundation.

A few miles northeast of West Salem, the stand was for a time known as the largest remaining uninfected stand of American chestnut trees.

That was before chestnut blight took hold.

There’s an old saying about the American chestnut. A squirrel could have gone from Maine to Florida on the unbroken canopy of chestnut trees without its feet ever touching the ground. That exaggeration roughly describes the natural range of the majestic tree, once prized as a food source and for its timber.

The West Salem chestnut stand is an isolated pocket of trees that escaped the early ravages of chestnut blight because it existed so far away from the tree’s natural range. The stand came to be as the result of farmer Martin Hicks planting eight or so chestnuts — reportedly sent from Pennsylvania — along a fencerow. Nature, probably in the form of squirrels, took care of the rest.

Chestnut blight was first noticed in New York in 1904, likely through importation of infected Japanese chestnut trees. The fungal disease wiped out an estimated 4 billion trees during the next 50 years.

A common misconception is that the American chestnut is extinct; however, it’s not even technically endangered. But it’s safe to say chestnut blight has reduced the tree to shrub status. There are plenty of trees out there, especially in the natural range, but very few that grow beyond eight inches in diameter.

Dennis Fulbright is an emeritus professor of plant pathology in the department of plant, soil and microbial science at Michigan State University. On a scale of 1-10, he rates the overall health of the West Salem stand at 3.5 to 4. There are individual trees that might be fives, sixes or even sevens, but there are no 10s left any more.

Having only missed two of these summer checkups since the 1980s, Fulbright recalled that prior to chestnut blight, he and his colleagues would notice that if it were 90 degrees in field where the cars were parked, it would be 20 degrees cooler under the dense chestnut canopy. And when rains came, he said, they would sit beneath the trees to eat their lunches without fear of getting wet.

Chestnut blight found its way to West Salem by the late 1980s, and within a short time, trees, some nearly 100 feet tall, began to die off.

The 5,000 remaining trees or so face a number of challenges to their survival.

“Chestnut blight is just one disease out here,” Fulbright said. The trees must also fight off deer which eat small shoots, root rot, boring beetles and small wasps that damage the bark and allow the chestnut blight fungus to enter.

Data show that the majority of larger trees surviving in the West Salem stand are 50 percent dead and holding, and have been for the past few years. Fulbright says that’s not necessarily all bad.

“Half alive is half alive,” he said.

Anita Baines, an associate professor of biology at UW-L, called to Fulbright from a distance and pointed to a 60-foot-tall tree. Baines has been working on the stand since the mid-1990s.

“Tree Number 34 is flowering,” she yelled, gesturing to a small cluster of flowers on a branch 30 feet off the ground. Tree 34 is one of thousands of trees in 12 permanent plots that have been monitored and treated over the years.

Since 1992, Baines and other scientists have been treating the trees with a hypovirulent virus which acts as a biological constraint. It attacks the fungus that causes chestnut blight, allowing the tree to use its own defenses to fight off the invader. Trees do that by creating callus tissue, not unlike a scab.

“We are trying to make chestnut blight less like ebola and more like the common cold,” Baines said. “The trees are still going to get sick, just not as sick.”

But the process takes time.

“This is not an overnight fix,” Baines said. “You have to be patient.”

Scientists from the three universities, with help from other agencies over the years, including the Department of Natural Resources for a while, first began treating trees in the early 1990s and then stopped in the early 2000s. The trees got notably worse so treatments were resumed.

Other researchers, in other locations, have focused on crossing the American chestnut with other chestnut varieties that are more resistant to chestnut blight.

But given the successes scientists have witnessed, especially with trees that were first treated 20 or more years ago, scientists are sticking with hypovirulence at the West Salem stand.

“We’re seeing if hypovirulence can save trees, and we’ve settled in on that,” Fulbright said.

Baines says she doesn’t see there ever being a cure for chestnut blight, and if there is ever to be a chestnut population capable of maintaining itself with regular treatments from scientists, a two-prong approach will be required.

“The future of a healthy American chestnut rests on a combination of both hypovirulence and hybridization, and this is just a part of it,” she said.

Fulbright said he sees stands in Michigan that are also recovering and thinks that West Salem’s could eventually do the same.

“We are trying to make chestnut blight less like ebola and more like the common cold. The trees are still going to get sick, just not as sick.” Anita Baine, UW-L biology professor

“We are trying to make chestnut blight less like ebola and more like the common cold. The trees are still going to get sick, just not as sick.”

A man suspected of three recent drive-by shootings in La Crosse is being held in the La Crosse County Jail.

A warrant has been issued for a 41-year-old La Crosse man accused of grabbing a woman by the neck and punching her in the face.

A 33-year-old La Crosse man is being held in the La Crosse County Jail on drunk driving and drug charges after an April 11 traffic stop in La Crosse.

A criminal complaint has been filed against a 42-year-old La Crosse man after an attack in a La Crosse alley that left a victim hospitalized.

The Aquinas Catholic Schools Foundation has received a transformational gift of $1,010,000 from the estate of Donald M. & Louise F. (Paul)…

Small, light-colored blisters are a telltale sign of chestnut blight.