The La Crosse County Sheriff’s Department got the first green light Tuesday on the road to purchasing a new armored Bearcat vehicle, and the road ahead looks to be smoother than it was when the last Bearcat was bought.

The La Crosse County Board’s Judiciary and Law Enforcement Committee voted unanimously to approve acceptance of a $225,000 grant from the state Department of Military Affairs – Division of Emergency Management. That grant will pay for more than two-thirds of the cost of a Lenco Bearcat G3 to replace a Bearcat purchased in 2005.

The county will be allowed to sell its old Bearcat to another Wisconsin law enforcement agency, and that’s expected to bring in another $60,000 to $80,000 to help buy the new Bearcat, which is expected to cost from $300,000 to $312,000, depending on the equipment options ordered.

The resolution approved by the committee, which needs to be approved by the county board at its meeting July 21, allows the sheriff’s department to use up to $10,000 in savings accrued this year from lower gas and oil prices toward the purchase price, in case the old Bearcat doesn’t bring in enough money. No funding from the county general fund will be needed for the Bearcat purchase.

When the department won a grant in 2004 to buy its first Bearcat, there were concerns about the militarization of law enforcement, but Sheriff Steve Helgeson emphasized Tuesday that in the past 11 years the Bearcat has proven its value on many occasions. “This is a safety vehicle or a rescue vehicle. This is a way to keep our deputies safe,” Helgeson said. “The citizens of our country are more heavily armed than they’ve ever been. I think it’s very important that we have the tools to keep our officers safe.”

The Bearcat was used in 10 high-risk situations in 2015, and this year though June 23 it had been called out seven times. Many of the times the Bearcat has been used have involved armed standoffs and serving high-risk warrants.

Helgeson said Bearcats offer protection far beyond that afforded by squad cars, stopping bullets that could readily pierce vehicles not equipped with armor.

Helgeson also emphasized that the Bearcat is available for use in other surrounding western Wisconsin counties that are part of the regional Aligned Law Enforcement Response Team centered in La Crosse County, one of seven ALERTs in the state.

La Crosse County Sheriff’s Department Chief Deputy Jeffrey Wolf said there also was some controversy stemming from the county board not being consulted before accepting the grant. That won’t be a problem this time, because the board is getting a chance to weigh in on accepting the grant.

While the current Bearcat is in good shape and not in any immediate need of expensive maintenance, grants are being awarded to the state’s ALERTs for Bearcat replacement over the course of four years.

The Bearcat G3 model offers some significant improvements over the department’s old Bearcat. The G3 has a newly designed frame, Wolf noted, and it has four doors instead of two, which offers more flexibility for getting and out of the vehicle in different situations. The G3 also has options for a built-in battering ram and cannon to fire tear gas. Those features had to be added to the county’s old Bearcat.

If the county board gives final approval to the grant, the money should arrive in September and the vehicle will be ordered in October. Wolf said he expected the department would get the new Bearcat next June.

“The citizens of our country are more heavily armed than they’ve ever been. I think it’s very important that we have the tools to keep our officers safe.”

A look at some of the local crime stories that made the Tribune in May and June.

The La Crosse County Board got some good news Thursday about maintaining its stellar bond rating, and the timing of the news couldn’t have bee…

Police rely on training, teamwork and tools — and armored vehicles — in standoff 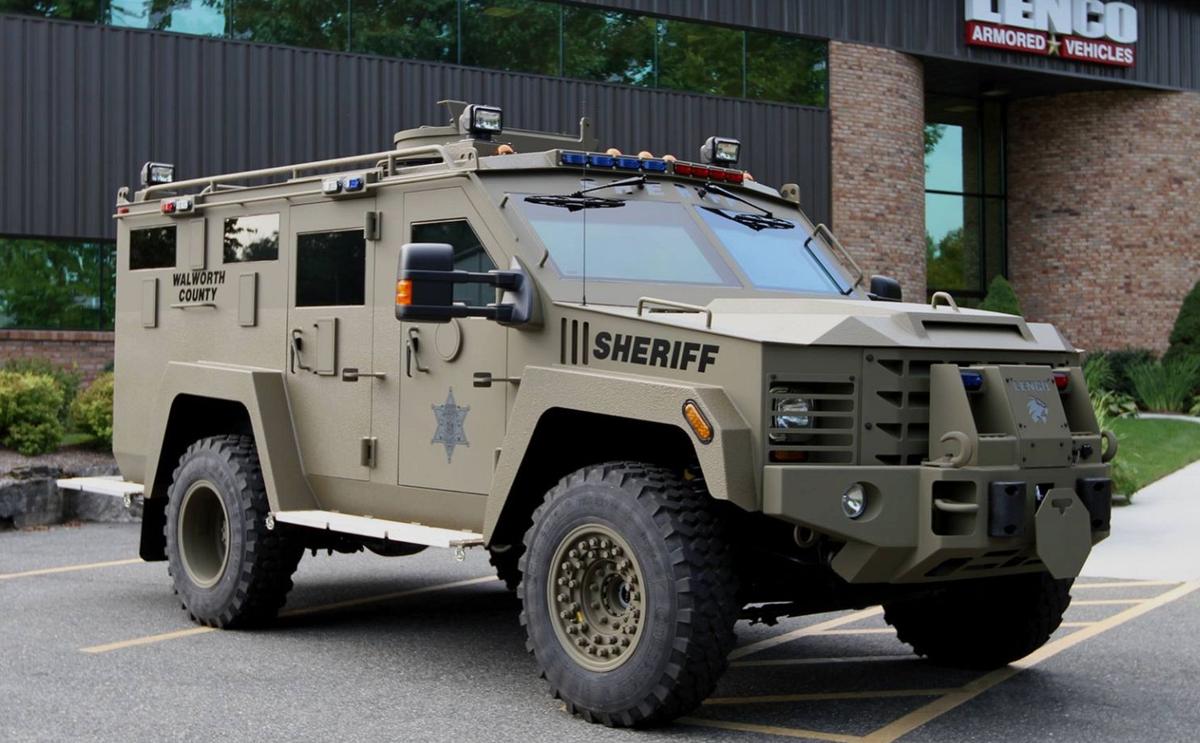 The La Crosse County Sheriff’s Department has been offered a $225,000 grant to be used for the purchase of a new Lenco Bearcat G3 armored vehicle, much like the one pictured here.