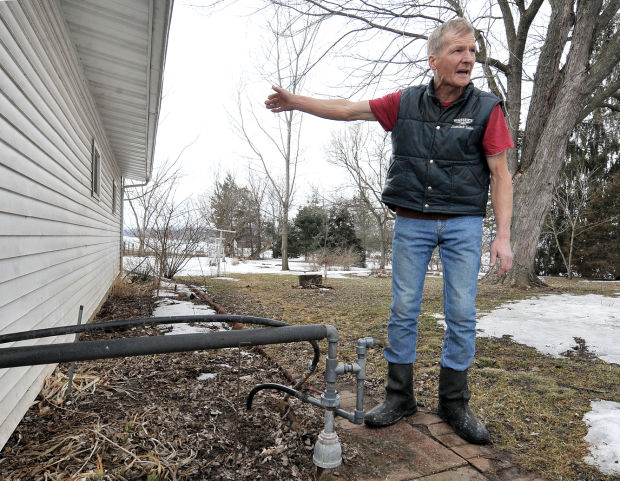 Dale Jorgenson of Sparta is concerned that the U.S. Silica sand mine near his farm is responsible for the artesian well on his farm going dry. (Rory O'Driscoll/La Crosse Tribune) 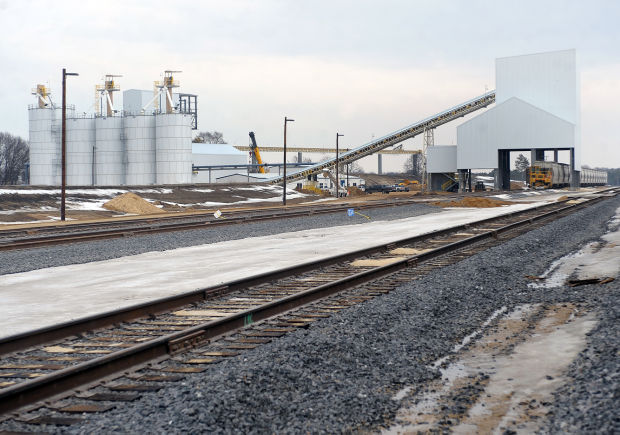 The U.S. Silica sand mine across the interstate from Dale Jorgenson's farm in Sparta. (Rory O'Driscoll/La Crosse Tribune)

SPARTA — Nothing happens when Dale Jorgenson twists the squeaky valve on a water spigot at his Sparta farm.

“Since 1900, the Jorgensons have owned this farm. We’ve never been without water before,” he said.

Soon, he’ll have a new well, and perhaps the old one will find some new life. But he believes that the company providing the new water source, U.S. Silica, is also responsible for plundering the old one.

On Friday, Jorgenson’s well ran dry for the second time in the past year, and he blames the new sand mine and processing facility about a mile away and its high-capacity well.

“It’s because of the sand mining operation,” he said. “The more they pump, the less water there is.”

U.S. Silica denies that its operations affected Jorgenson’s well. Potential use is estimated at 1 million gallons of water a day, but the plant is not yet fully operational.

“We don’t feel that this issue has anything to do with our mining operations in Sparta,” company spokesman Mike Lawson said.

However, the two parties have come together to reach a fix. U.S. Silica will drill a new well on the Jorgenson property and examine the old one to see whether repairs are possible.

The mine’s conditional use permit with the city of Sparta states that U.S. Silica is responsible for remedying any negative well impacts created by its operations.

However, no causation has been officially determined in the Jorgenson case.

On Saturday, U.S. Silica installed a pair of water storage tanks on the Jorgenson farm, and agreed to provide water for the more than 100 cows.

The first time Jorgenson’s well ran dry was April 19, when the mine began testing its high-capacity well. The farm was without well water for five days, and he estimates that he lost $2,000. Without enough water, cows’ milk production suffers.

The mine provided a back-up water supply then as well, although Jorgenson didn’t immediately suspect, or therefore notify, the new plant while trying to assess the reason for his well problems.

“We don’t feel like we caused anything,” Lawson said. “But we’re trying to be a good neighbor.“

Jorgenson rejected last fall’s offer. He said it came with a one-year warranty, a clause that Lawson was unaware of.

“We said we want a warranty for as long as you’re doing business over there,” said Jorgenson.

“I’m not going to officially put any blame on U.S. Silica,” he said, as he received no concrete evidence that its activities impacted the Jorgenson’s well.

However, Fahning saw that last April, the farm’s well failed when testing on the high-capacity well began.

“It was kind of a putting two and two together kind of thing,” he said.

Hypothetically, the plant could draw down local levels enough to interfere with the well.

“Certainly, it’s possibly, especially if it’s a flow well,” said George Kraft, a hydrologist at UW-Stevens Point and one of the state’s foremost groundwater experts. “It may not take a lot of pumping to reduce that water just the little bit” needed to impair an artesian well.

Kraft and a DNR report on sand mine effects noted that groundwater impacts are very location-dependent.

Assigning blame isn’t the issue for Fahning; establishing causation would likely require research from an independent consultant, dragging out the process. He just wants water flowing again, which would satisfy the conditional use permit regardless of why the well went dry.

In a letter from U.S. Silica attorneys to the Jorgensons’ attorney last October, the company states that it provided water back-ups last April “without questioning whether the loss of pressure was the result of U.S. Silica’s activities.”

He thus far believes that U.S. Silica has made good-faith offers to replace the well.

“As far as the city is concerned, they’re still in compliance with the conditional use permit,” he said.

Any warranty issue isn’t a factor for the city, he said. If a well failed with the conditional use permit still in place, U.S. Silica would have to replace the well or the city would pursue determining causation, regardless of warranty agreements.

“As far as we’re concerned, they need to provide water as long as they’re in business.”

The design of the Jorgenson well is also part of the dispute.

It is an artesIan well, which relies on natural pressure, not a pump, to push water out of the ground. U.S. Silica argues that design impairs consistency.

“As I understand it these artesian wells just go dry sometimes,” Lawson said.

Jorgenson contends that his well has never experienced these problems before, and that modifications to the well last spring didn’t improve the flow.

With a new well, it seems unlikely that third party testing will determine why the Jorgenson well went dry.

Dale Jorgenson of Sparta is concerned that the U.S. Silica sand mine near his farm is responsible for the artesian well on his farm going dry. (Rory O'Driscoll/La Crosse Tribune)

The U.S. Silica sand mine across the interstate from Dale Jorgenson's farm in Sparta. (Rory O'Driscoll/La Crosse Tribune)