The definitive history of the corn dog (er, Pronto Pup)
0 comments
Share this
Return to homepage × 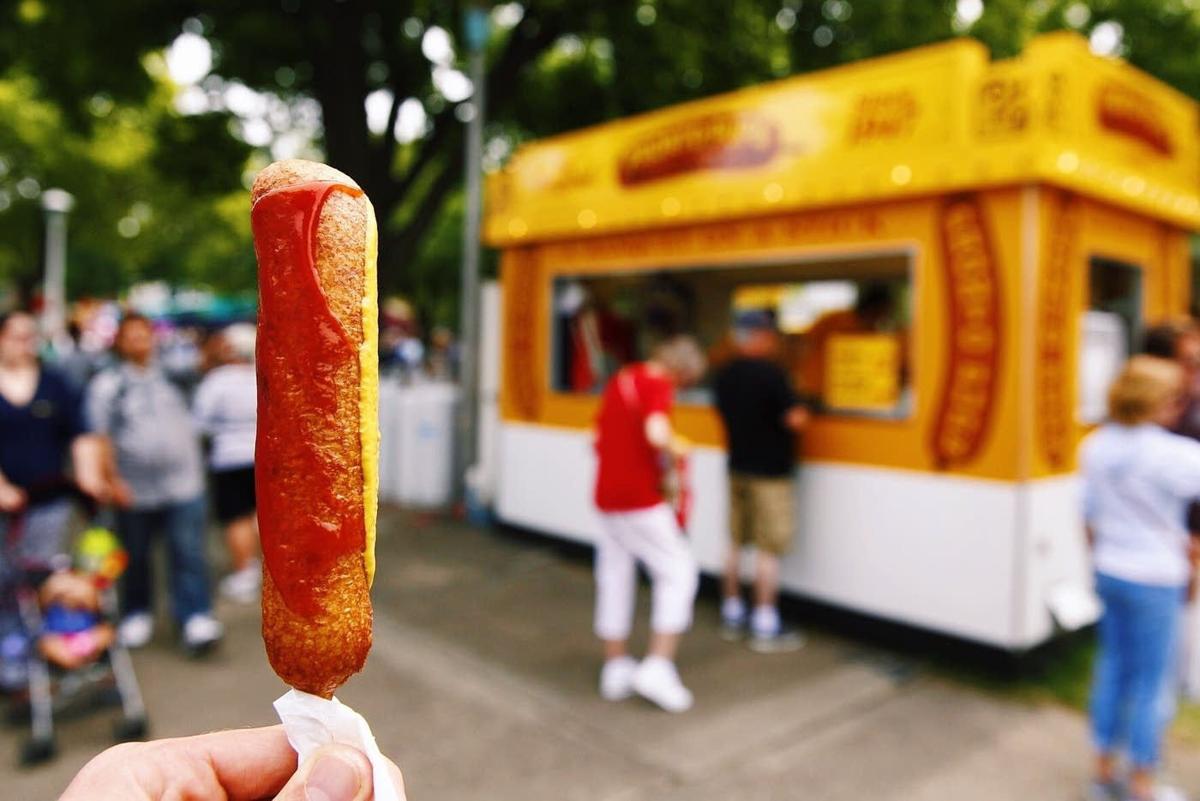 A Pronto Pup at the 2016 Minnesota State Fair. In the early days at the fair, Pronto Pup stands only served mustard. Ketchup was added decades later. 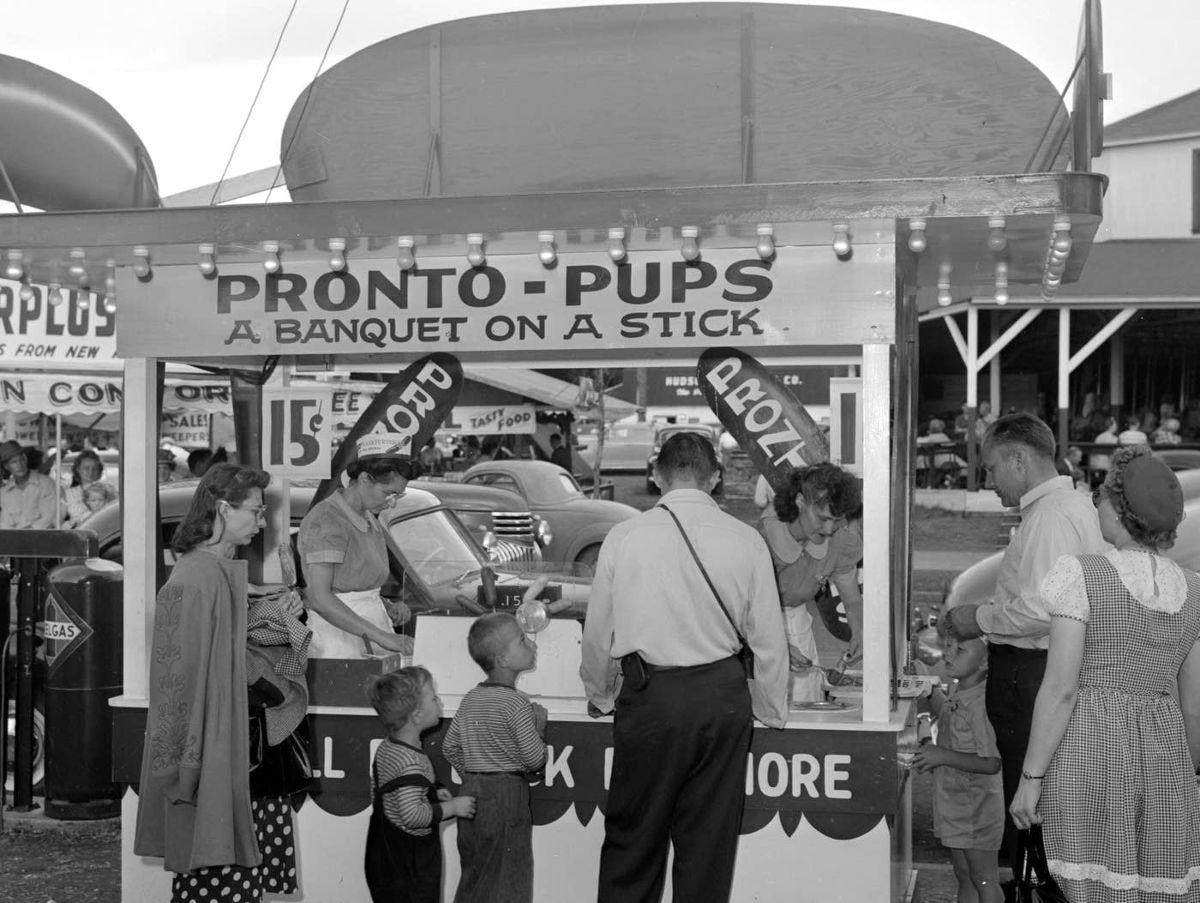 One of the first Minnesota State Fair Pronto Pups booths, in 1947. 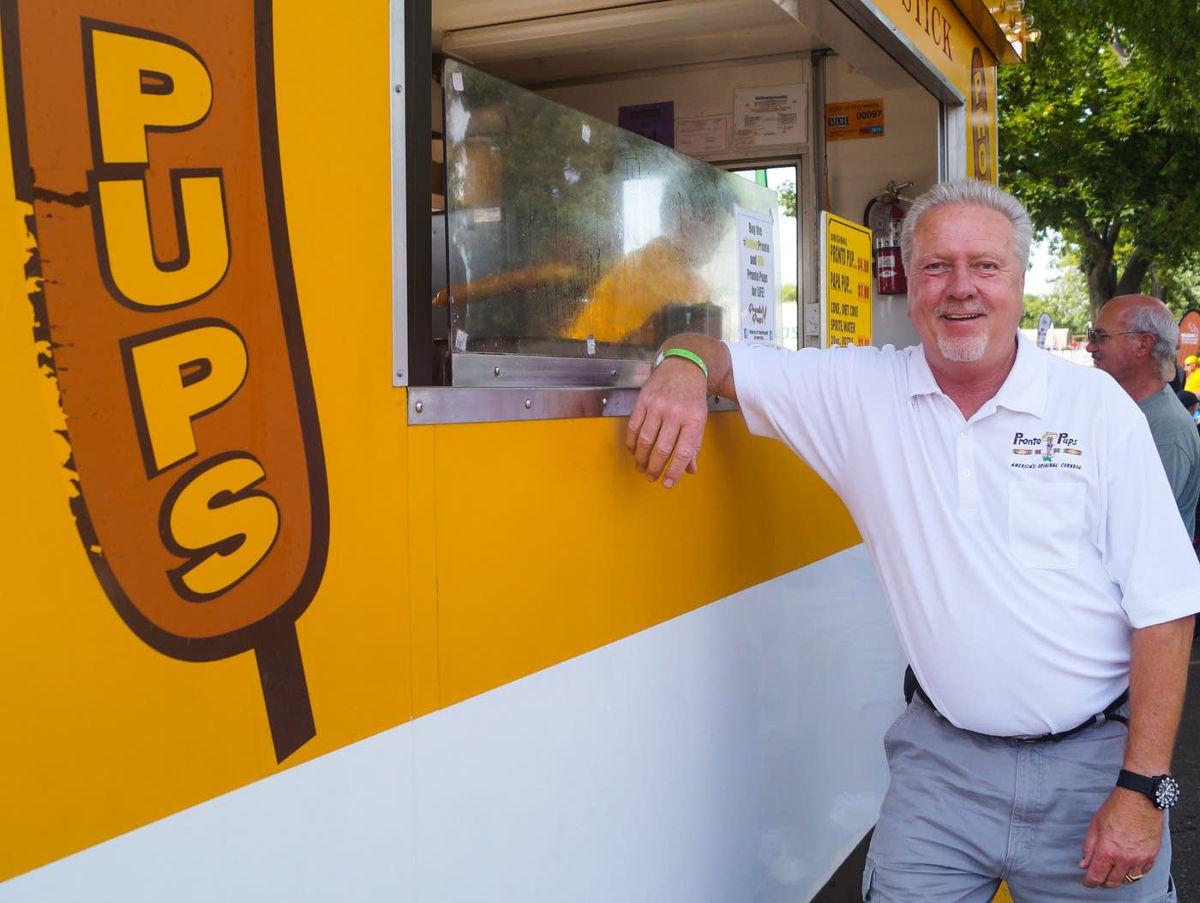 Gregg Karnis owns the Pronto Pups franchise at the Minnesota State Fair. His family brought Pronto Pups to the fair in 1947. 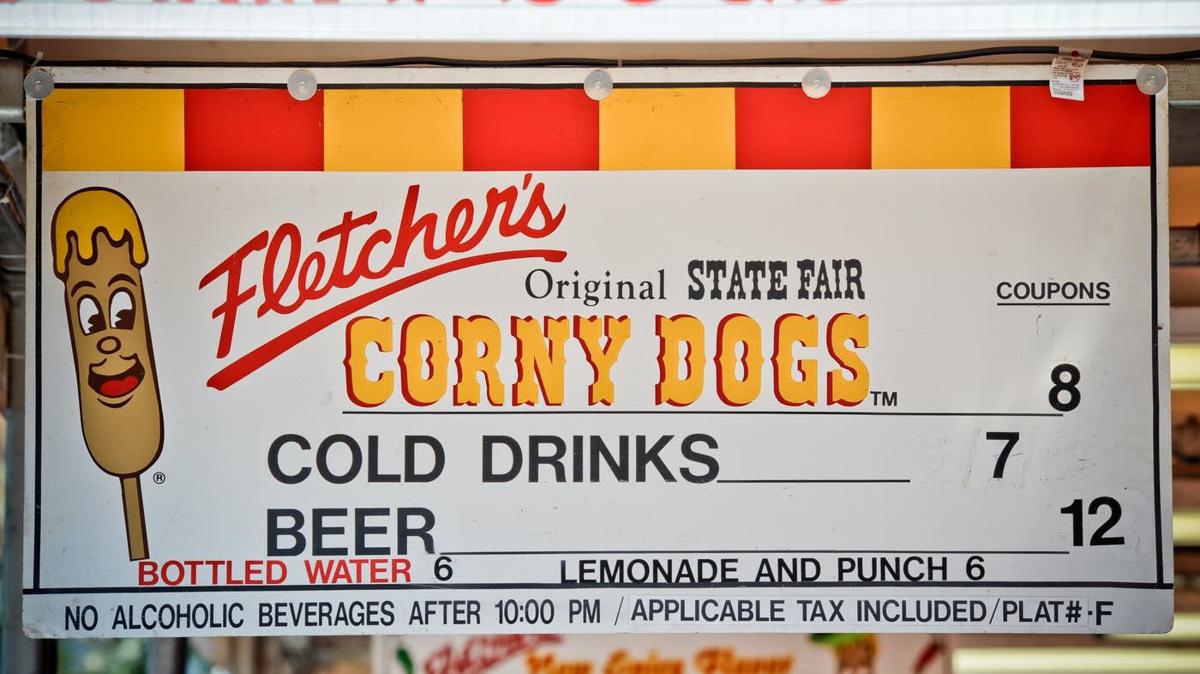 Fletcher’s Corny Dogs at the State Fair of Texas. 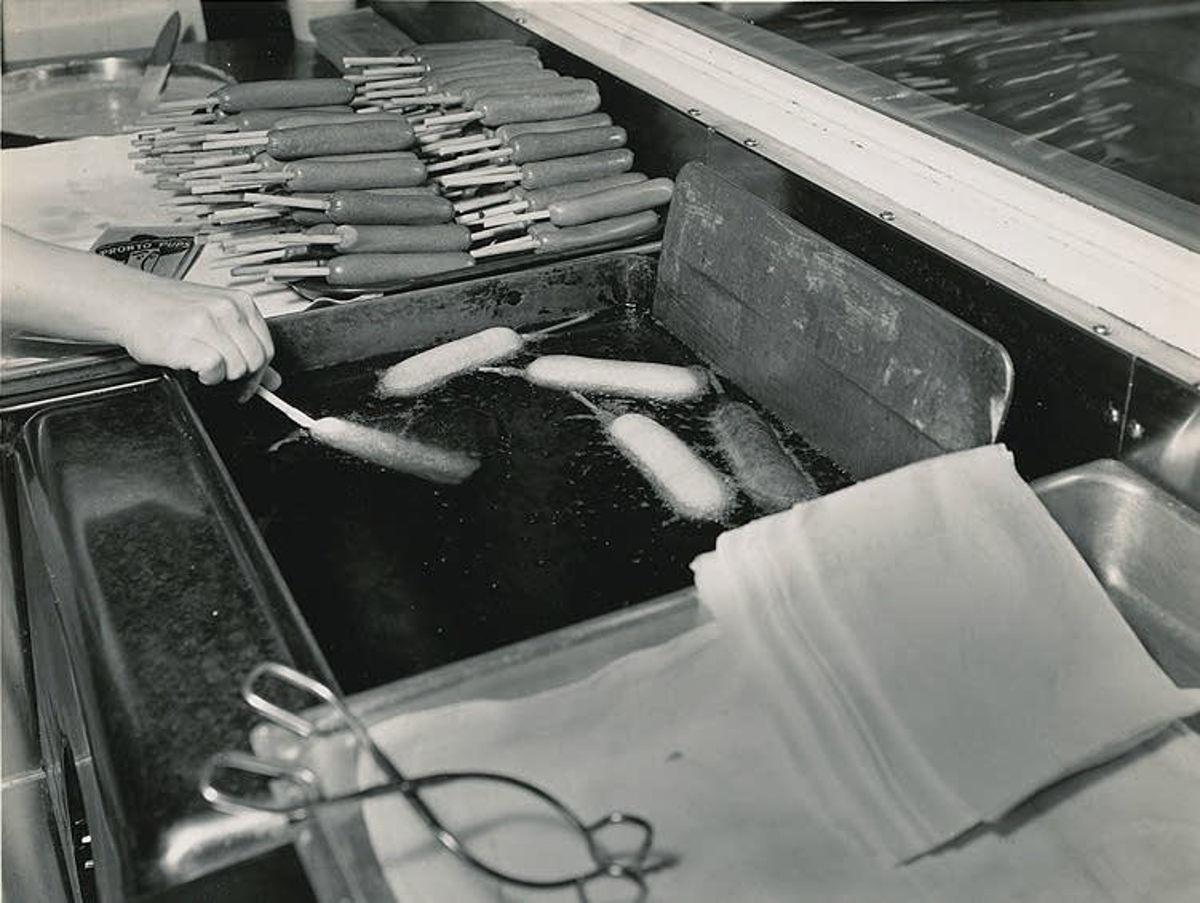 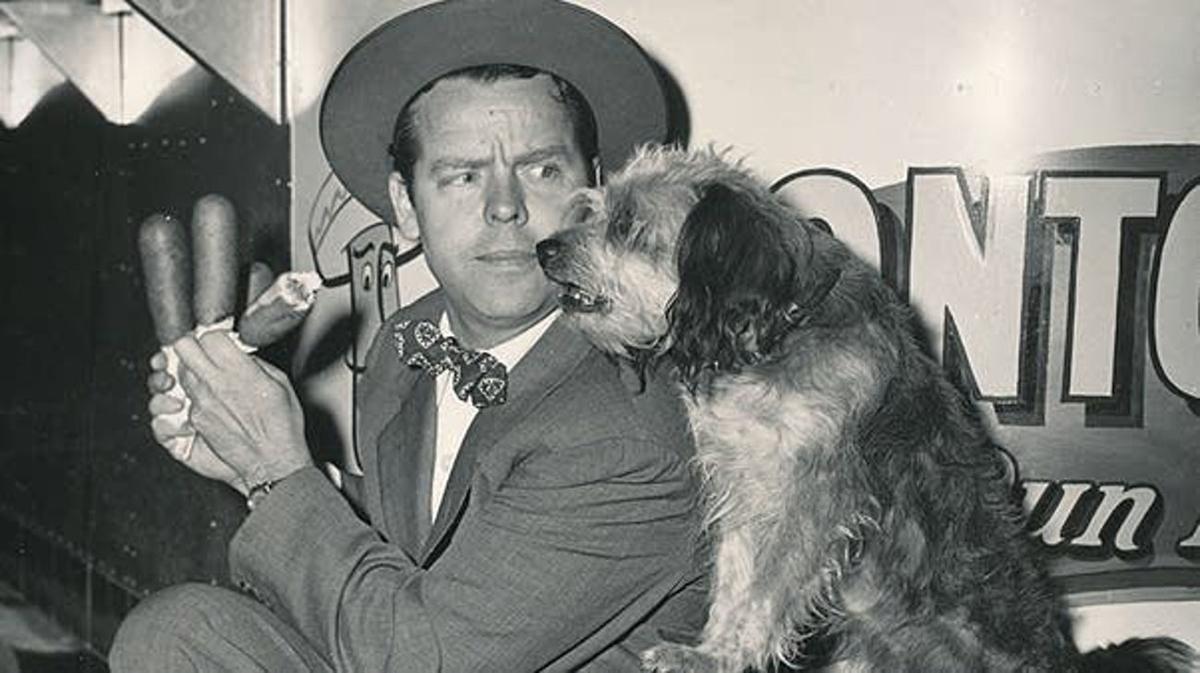 Actor Arthur Lake, who made the character of Dagwood Bumstead famous on TV, in movies and on the radio in the 1930s and ‘40s, keeps a Pronto Pup away from canine costar Daisy.

But who can America thank for the corn dog?

The origins of the batter-dipped meat on a stick are as murky as the depths of the deep fryer that crisps it.

One company with a stick in the game is Pronto Pup, a familiar sight for anyone who has walked the grounds of the Minnesota State Fair and watched that mini-Ferris Wheel of meat descend into the grease.

In Minnesota, Pronto Pups and corn dogs have been pitted against each other for at least half a century — and their supporters are resolute in the distinction between the two. Stalwarts say the difference is clear: Pups are made with pancake batter and corn dogs use cornbread batter.

Myth dispelled: The batter recipes are objectively very similar — and both include cornmeal. The real difference is in the sweetness. Corn dogs have it; Pronto Pups don’t.

When it comes down to it, Pronto Pups really are corn dogs.

Here’s your rule of thumb: Every Pronto Pup is a corn dog, but not every corn dog is a Pronto Pup.

Despite that, Dave Sulmonetti, the president of Pronto Pup, hates to even say “corn dog.” And Gregg Karnis, who owns the Pronto Pup franchise at the state fair, refers to it as the “C-D word.”

It’s a point of pride. Pronto Pup is to the “C-D word” as Xerox is to copier and Kleenex is to tissue — but at its heart, it’s a corn dog. And some claim it was the very first one in the country.

Pronto Pups aren’t native to Minnesota, but Minnesotans have wholeheartedly embraced them. The state fair franchise is on track to sell its 25 millionth Pup this year. Over the 12 days of this year’s fair, Pronto Pup staff will mix up 115 tons of batter and serve 24 tons of sausages. (That’s enough batter to fill an Olympic swimming pool, and about 37 miles worth of hot dogs, laid end to end.)

As heartily as Minnesota might wish it could put Pronto Pup alongside the pizza roll and the Bundt cake as foods that came from here, the meal-on-a-stick actually comes to land of 10,000 lakes from a beachside town in Oregon.

Corn dog lore has it that George Boyington, a concessions vendor serving tourists in Rockaway, Ore., hit a breaking point over Labor Day weekend in 1939 when the rain ruined his stock of hot dog buns.

Boyington was a reformed bootlegger who had spent years smuggling liquor into Michigan from Canada; he’d moved to Oregon to clean up his act. As he fed the scraps of his ruined buns to the seagulls, he bemoaned his plight. If only there was a way to cook buns on the spot, as they’re needed.

That spark of an idea grew, and thus, the corn dog was born — a deep-fried solution that was portable for vendors and pleasing to taste. “Dun in a bun,” the early slogan promised. Boyington dubbed it the Pronto Pup for the speed of the cooking process.

Boyington and his wife, Versa, trademarked the Pronto Pup name in 1942, and began selling franchises of the carnival treat. They would ship franchisees the proprietary flour mix, but the rest was up to them. There was only one rule: Pronto Pups could only be served plain or with mustard. No ketchup. (The condiment rule was later relaxed, but not until several decades later. Now, Pronto Pup staff at the fair will happily paint on either one.)

The Boyingtons’ son, Baxter, was in diapers when his father hit upon his bright idea, but he grew up skewering and dipping dogs. He remembers when the business took off, and his family went from struggling to pay the bills to living in a huge house on a lake outside Portland.

In 1945, the Christian Science Monitor in Boston caught scent of the booming “banquet on a stick,” as the fair stands proclaimed.

“If you have never heard of Pronto Pups, prepare yourself. They show signs of becoming as ubiquitous as Tom Thumb golf, at least in the West.”

The Pronto Pup spread east when Jack Karnis, a young man just out of the Merchant Marines, opened a restaurant in downtown Chicago. His was the first Pronto Pup franchise east of the Rockies, according to his son, Gregg.

Then Minnesota came knocking, in the form of prominent Twin Cities businessman William Brede. It was 1946, and Brede had flown to Chicago for a business meeting.

Brede, Karnis said, was “the kind of guy who figured anything that works in Chicago should be able to work in the Twin Cities.” When he saw the blocks-long crowd outside Karnis’ Pronto Pup restaurant, he got in line. He didn’t even know what he was in line for — he just knew if it was good enough to earn that long a line, it was worth checking out. He skipped his meeting, waiting.

At the front window, Brede ate his first corn dog — Pronto Pup — and was hooked.

“He tried one and he said: ‘Jack, these are fantastic. Let me ask you: If I can get us spots at the Minnesota State Fair, would you come in with me?’”

Karnis said his father brushed off the offer. He was making good money and was fielding all kinds of half-baked offers from people falling hard for the corn dog.

But Brede was persistent. He flew back to the Twin Cities, went before the state fair board and secured six concession spots. Then he got back on a plane, flew back to Chicago, got back in line and gave Jack Karnis the offer again.

Karnis’ wife Gladys almost sank the deal, her son said. “She says, ‘Jack, first of all, where is Minnesota? I’ve never even heard of it.’”

She was also hesitant to give up the sure thing they had going in Chicago, but Brede offered to match Jack’s earnings for the year, and they signed up.

The Pronto Pup was served for the first time at the Minnesota State Fair in 1947. That year was a return to normal for the fair, after being cancelled in 1945 due to World War II and in 1946 due to polio. The Karnis family sold 106,000 Pronto Pups that first year, and they haven’t missed a state fair since.

The Karnises didn’t give up their Chicago roots, though. Instead, Gregg remembers, they’d make the drive every summer along two-lane highways, 14 hours each way. The interstates had not yet been built.

Gregg, who started working the family business at the fair when he was 12, left Chicago for school in Minnesota when he was 20 — and stayed. He eventually bought out his parents and the Brede family in 1991, taking control of Pronto Pups across the state. Next year will be his 50th working the fair. Some things have changed, he said, but some things never will.

“We make the Pronto Pup on a Ferris wheel-type of cooker that my father designed, because he wanted every Pronto Pup to be cooked for exactly two minutes and 15 seconds, no matter who was on the cooker,” Karnis said. “We mix the batter exactly the same way we did to the measurements and liquids that we did in ‘47. ... My dad was a dogger on maintaining consistency.”

The Karnis’ Minnesota State Fair set-up is by far the largest Pronto Pup franchise in the country. (In the world, really. Pronto Pups are big in Canada, but not as big as they are in Minnesota.) The Memphis area also does a swift business, and the fried dogs are a big favorite at the Kansas State Fair. Those are the sweet spots, said Dave Sulmonetti, Pronto Pup’s president.

In Pronto Pup’s home state, though, the original corn dog is underappreciated.

“There are people who I run into in Portland that don’t know what a Pronto Pup is, and I’m like, ‘What? Have you lived under a rock?’” said Sulmonetti, whose family bought the original business from the Boyingtons in 1950.

They have no idea they’re living in the birthplace of the corn dog — maybe. Plenty of people in Dallas would be willing to fight them for that honor.

If it wasn’t George Boyington at the Oregon beach, cursing the rain and frying up the first corn dog, then it might have been the Fletcher brothers, Carl and Neil, on the Texas state fairgrounds in 1942.

The brothers were actors, according to GG Fletcher, who married into the corn dog dynasty. They’d seen a baked sausage around Dallas that sparked the idea, and they spent months perfecting the batter in their home kitchen: Not too slippery, not too thick. The final, secret recipe — it’s kept locked up these days — hasn’t changed much in the 74 years since.

In Texas, the Fletchers’ creation is called the Corny Dog. (Oprah is reportedly a big fan. She takes hers with mustard.) About 600,000 are sold every year at the 24-day state fair.

A Pronto Pup at the 2016 Minnesota State Fair. In the early days at the fair, Pronto Pup stands only served mustard. Ketchup was added decades later.

One of the first Minnesota State Fair Pronto Pups booths, in 1947.

Gregg Karnis owns the Pronto Pups franchise at the Minnesota State Fair. His family brought Pronto Pups to the fair in 1947.

Fletcher’s Corny Dogs at the State Fair of Texas.

Actor Arthur Lake, who made the character of Dagwood Bumstead famous on TV, in movies and on the radio in the 1930s and ‘40s, keeps a Pronto Pup away from canine costar Daisy.