Become a Member
Read Today's E-edition
Share This
Stories of Honor: Louie Ferris was destined for a life of service
0 Comments
Share this
1 of 2 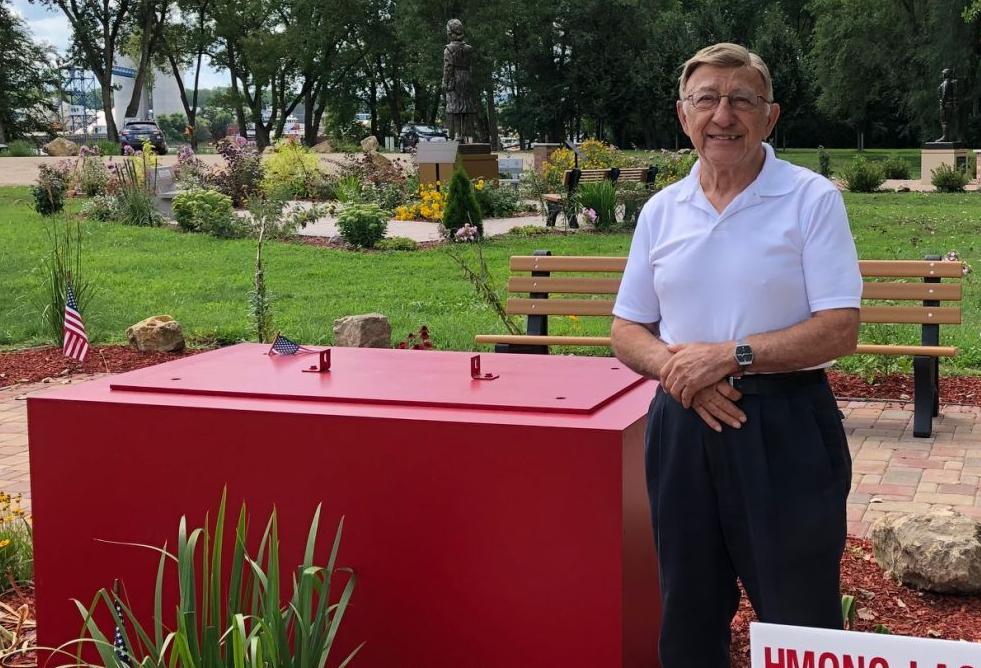 Louie Ferris stands in the center of the site where the statue will be erected for the Hmong-Lao Vietnam Memorial on Saturday. He has helped raise money for three other statues in the Veterans Freedom Park. 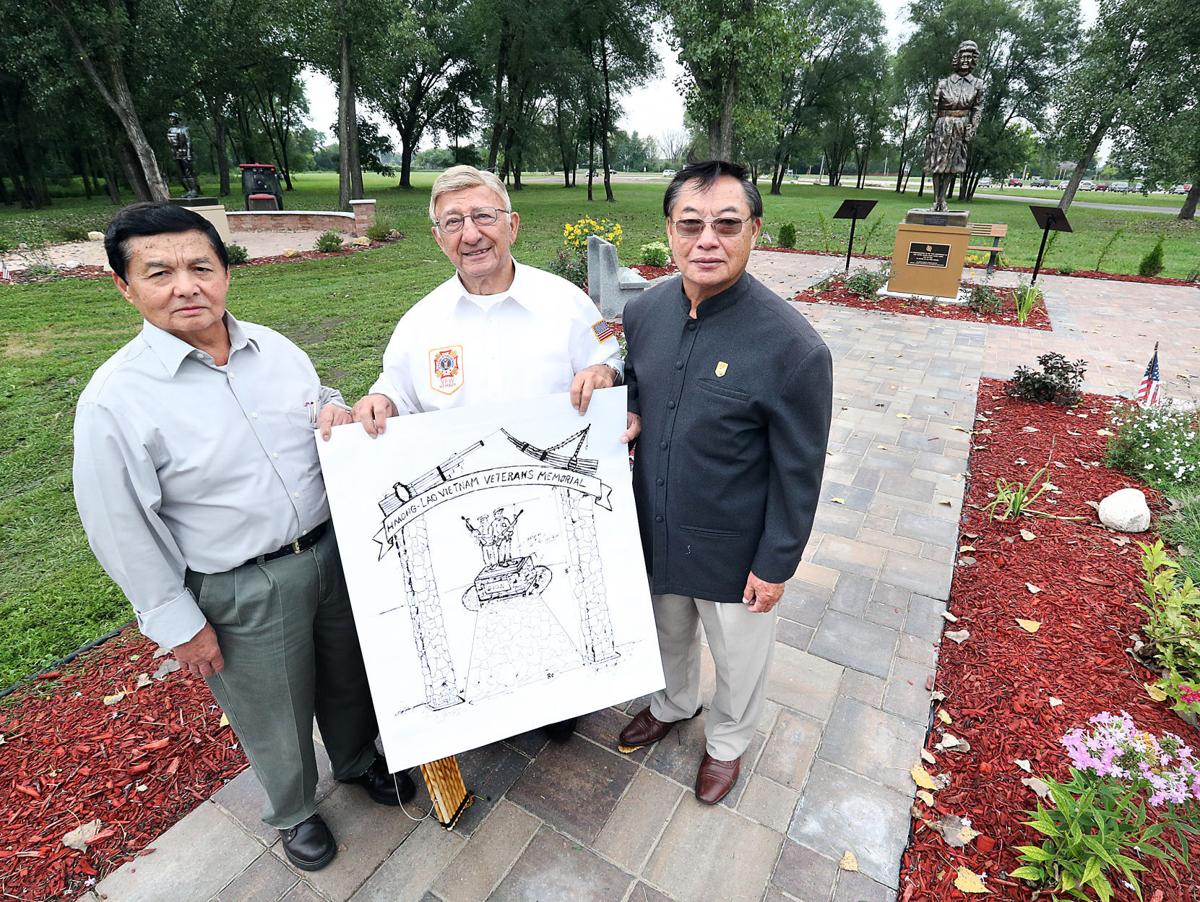 When asked where Louie Ferris gets his drive to serve his community so fervently, he explains that it’s just who he is.

Ferris grew up in La Crosse, a first-generation American with a thirst for life. The 91-year-old still lives in the house he was born in on the North Side, and although he is currently battling stage 4 cancer, he hasn’t been hindered from continuing a life of service.

While still in high school, Ferris joined the National Guard in the 1940s. He then enlisted in the U.S. Air Force, where he spent eight years active as a staff sergeant, serving in the Korean War.

Ferris described the decision to enter the military as an easy one, looking for a next step after his father died when Ferris was young. He said the military taught him discipline.

“That helped me all my life,” Ferris said.

Upon returning home, Ferris filled up his time by being fiercely involved in his home community.

Ferris taught English abroad (he knows six different languages) and has been a steadfast voice for numerous different causes in the community, while also holding down multiple jobs at a time.

Ferris and others chalk his dedication to life up to the priorities his family instilled in him.

“My mother was that way,” Ferris said. “If she had anything at all she would take it out of her mouth and give it to you. We were always extremely generous. We grew up that way.”

His father and uncle both served in World War I, and his parents immigrated as Christians from Lebanon during religious unrest in the Middle East.

“He has a family legacy of people who have served his community and his country,” said niece Victoria Bischel of Bloomer. “They were grateful to be here and they realized that it takes sacrifice in order for us to enjoy those freedoms, and I think it comes from his parents. The generation before sets the example behind.”

Now, as Bischel described, Ferris is handing off his passion to better the community to the next generation.

Veterans have been one of the most important causes for Ferris. He has helped raise money for flag poles and cleaned cemeteries. He’s led local Veterans of Foreign Wars and supported the Daughters of the American Revolution, and he has been a loyal supporter of Hmong-Lao veterans in the area.

But one of the projects he is most proud of is his work to erect war memorials in La Crosse’s Veterans Freedom Park.

Through Ferris’ efforts and those who rallied behind him, the still-expanding monument in the park already has sections that honor World War I, the Korean War, nurses who served in World War II and a Hmong-Lao Vietnam Memorial.

“It wasn’t like today. They can call on their phones and call home. And those days you were just hoping for a letter to come to your house,” Ferris said of the monuments. “It was a very lonely time. The hardest part of the fight was the loneliness.

“The memorials, they create a place for grief and provide a place to remember the Americans that we lost. We establish a place for healing,” he said.

He compares the memorials to the Field of Dreams, quoting the well-known movie line: “’If you build it, they will come.’ I built it and I know they will come. La Crosse will be proud.”

“He radiates such positive energy and this idea that one person can make a difference the way he has. And he’s brought so many people together in this effort,” said Rep. Jill Billings, D-La Crosse, who nominated Ferris for this series. “So many people and organizations in our community have stepped forward to support Louie and his efforts. And that makes me proud of my community.”

But there has never been a cause too small for Ferris.

He has dedicated his time to a variety of causes, such as volunteering for New Horizons Shelter and Outreach Centers, working fundraiser cookouts, collecting signatures to keep Hmong veterans in America, mentoring young adults and inspiring others to enter the military — he said he is always working somewhere “behind the scenes” in the community.

He’s never hesitated to jump up and protest or fight for what he believes in, a characteristic that was proven when he pushed back on the name for the new University of Wisconsin-La Crosse athletic complex and was instrumental in the eventual compromise.

“I hang in there until they get sick and tired of me,” Ferris said to describe his passion.

“He’s a man who always has time for those who have a need or are hurting and works toward a solution to bring peace to the community and brings them together,” said Bischel said. “He’s definitely a hero to this family as well as to those in the community. And it’s because he gives unconditional love.”

Now even at the age of 91 and as he battles stage 4 cancer, Ferris is not slowing down.

“He defies what the doctors basically said, that ‘we’ve done all we can,’” said Bischel. “I have to tell you, he wears me out. He not only made a resilient comeback, he has just got the kind of energy and drive, and you know he still loves serving.”

Ferris has been spotted tending to the gardens at the veterans memorials, kneeling down on a pillow as he weeds the flowerbeds — he sent a note to the Tribune last week for this story, saying he had just been at the site pruning and weeding. Bischel said she has found him on ladders trimming bushes or painting his house. He lifts weights and still runs on a treadmill.

Ferris said he is “doing really great,” and he’s persistently reminding the community about the many projects he continues to work on, including the unveiling of the WWII Memorial in September.

Louie Ferris stands in the center of the site where the statue will be erected for the Hmong-Lao Vietnam Memorial on Saturday. He has helped raise money for three other statues in the Veterans Freedom Park. 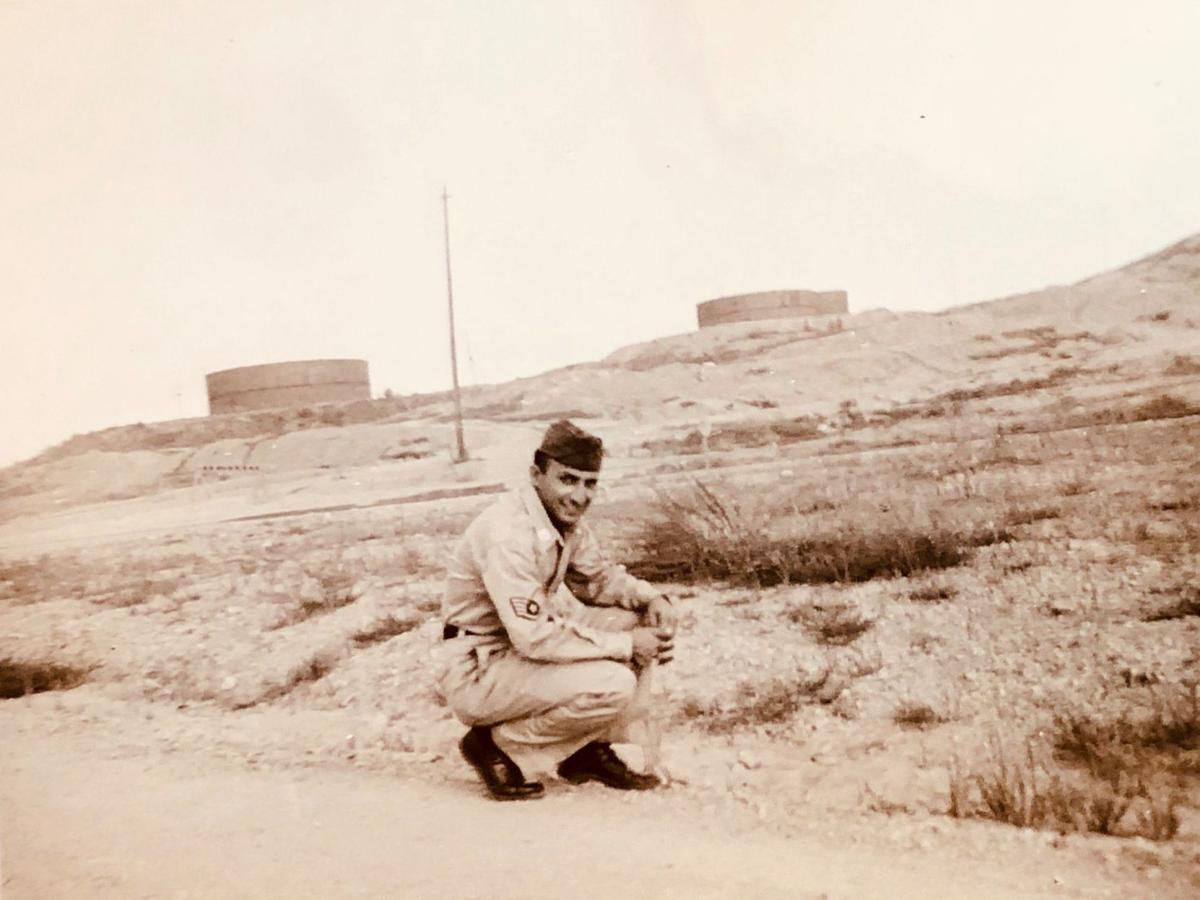 Korean War veteran Louie Ferris has dedicated his life to serving others by giving back to the community, even at age 91 as he battles stage 4 cancer. 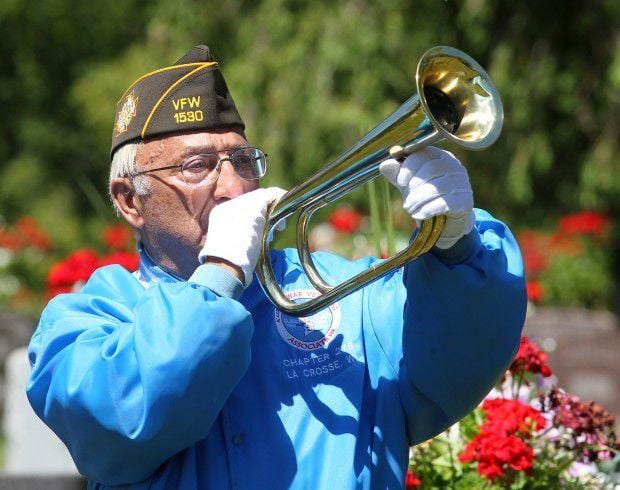 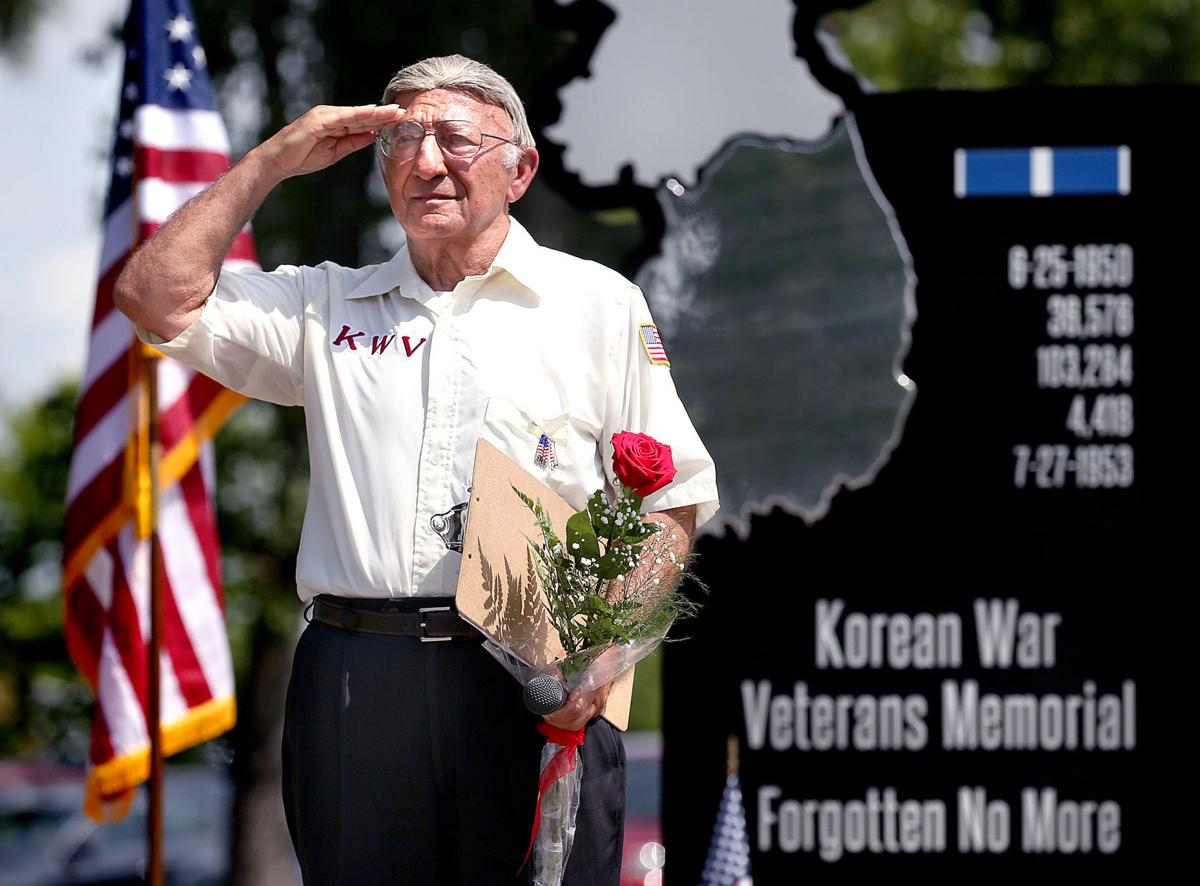 Korean War veteran Louie Ferris salutes during the playing of taps on Wednesday at Veterans Freedom Park during a dedication ceremony for a memorial to the people who served during the three-year Korean War, which took the lives of more than 36,000 U.S. Americans. 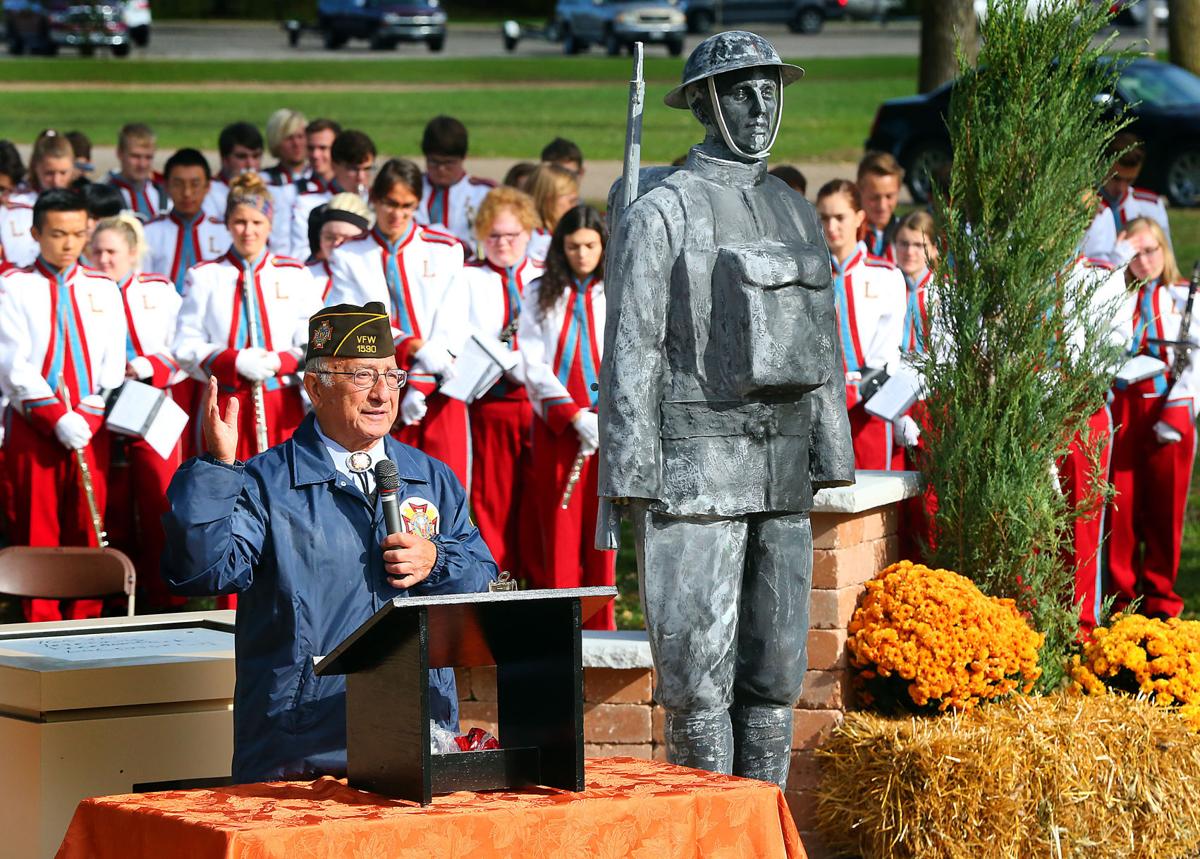 Louie Ferris speaks during the dedication of the World War I Memorial in Veterans Freedom Park Wednesday. 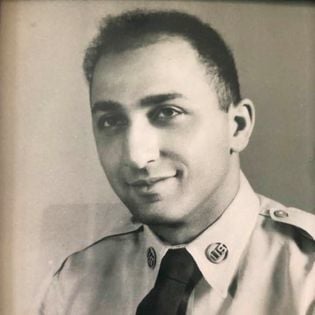 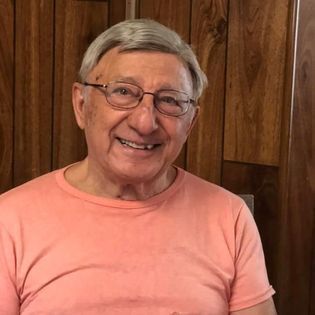 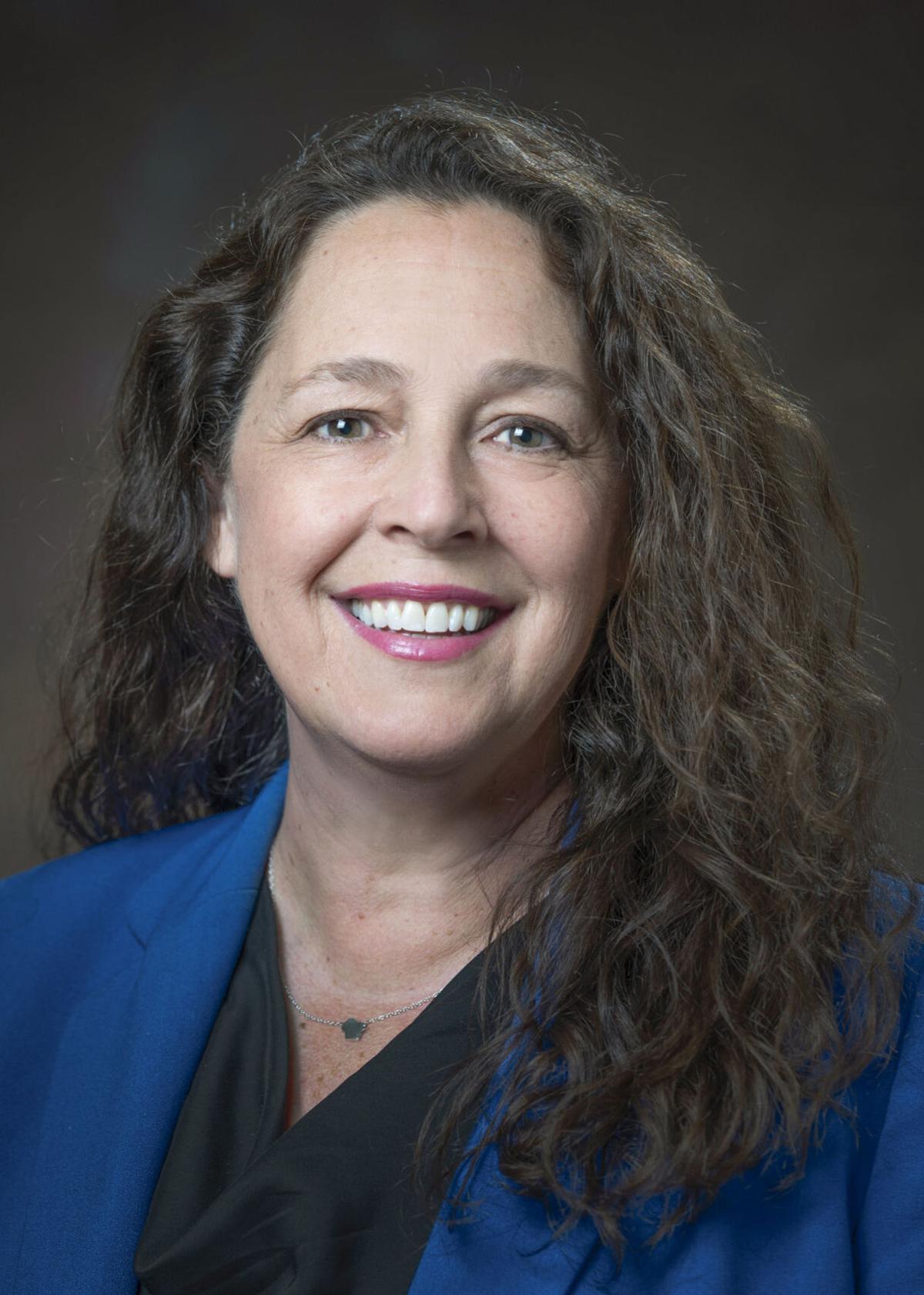