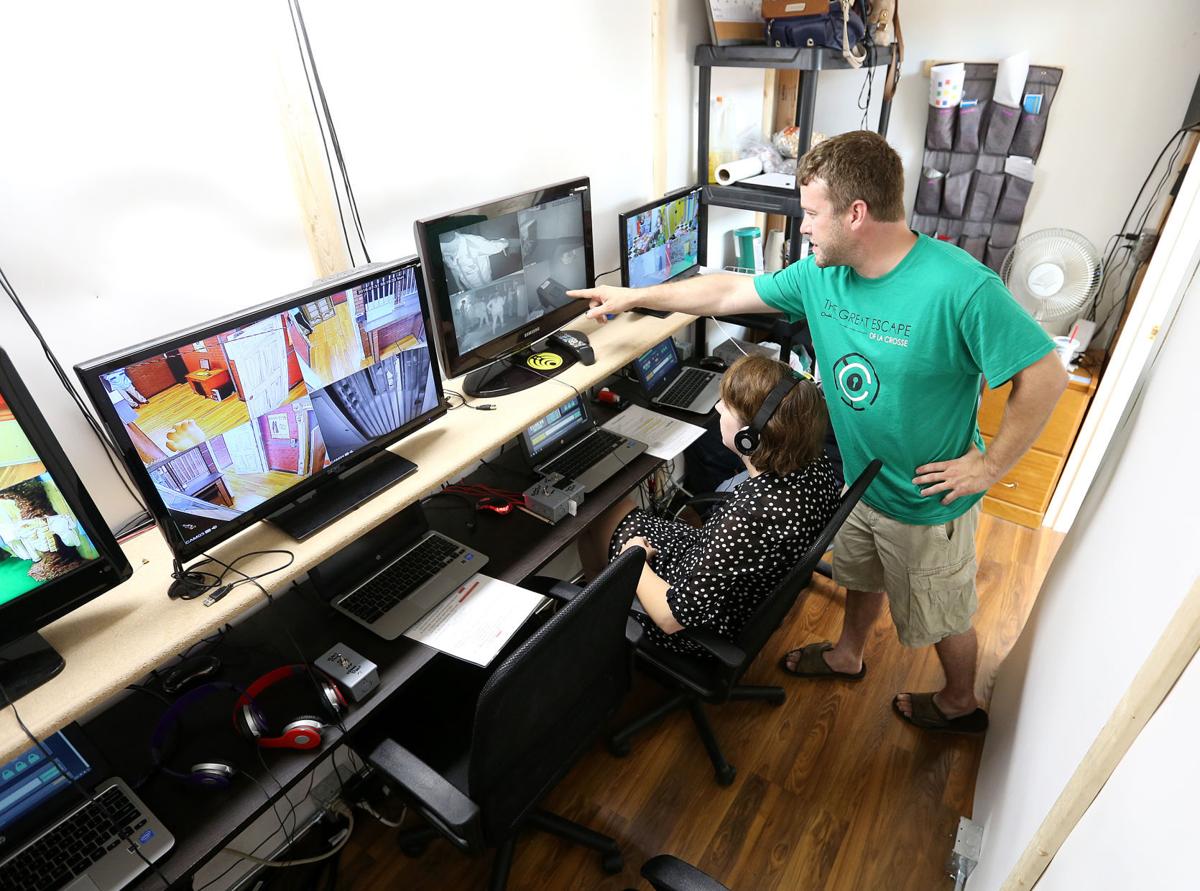 The Great Escape of La Crosse owner Toby Farley and game master Brooke Robison monitor a team’s progress while the team attempts to escape from one of the four rooms in The Great Escape. 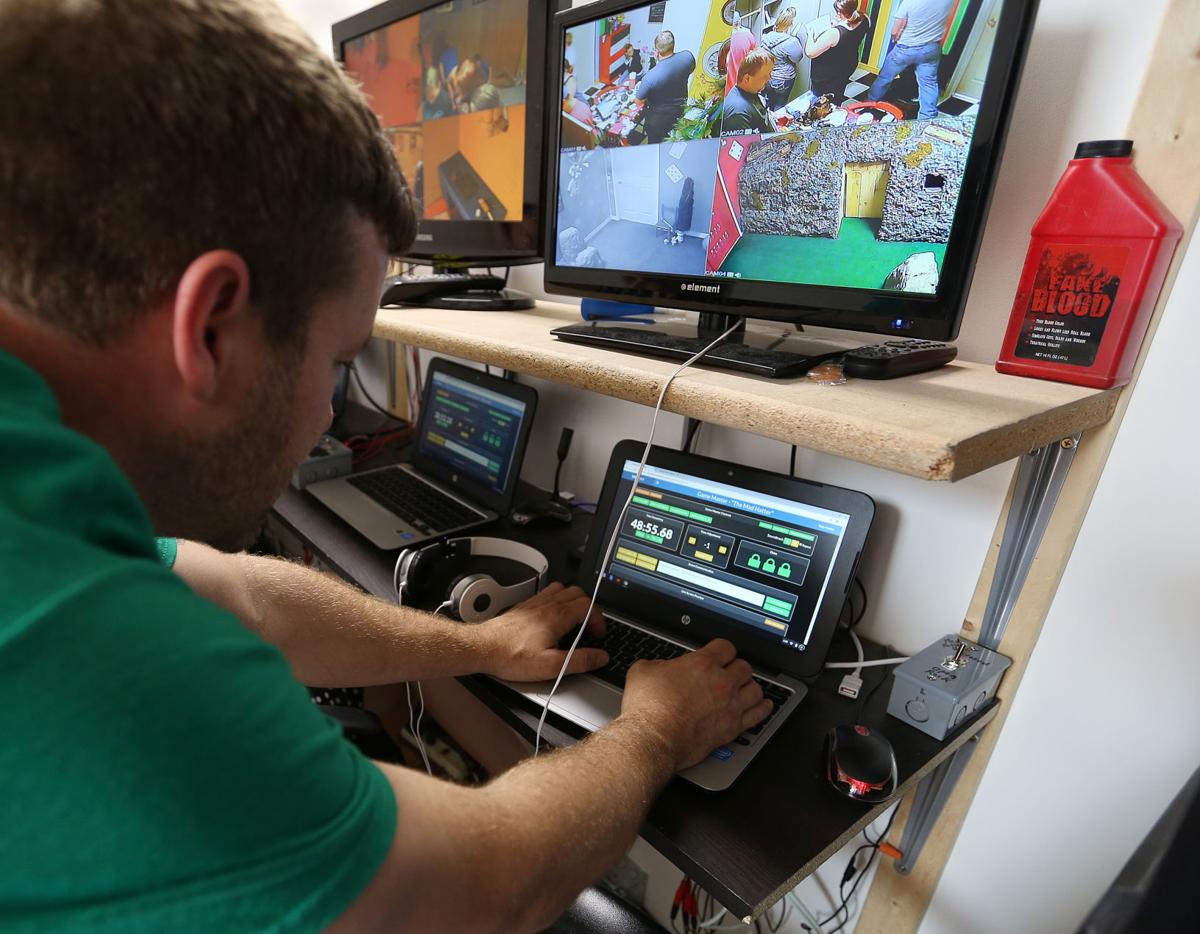 The Great Escape of La Crosse owner Toby Farley gives a team a hint as they begin to struggle with a puzzle in one of the rooms.

Going through an escape room is an exercise in extremes — both extreme fun and extreme frustration.

I tried out The Great Escape, one of three escape room businesses in La Crosse, July 24 along with my brother Alex and his girlfriend Brittney.

When Brittney invited me to check out an escape room, I was immediately on board. With fun themes, tricky puzzles and the opportunity to try something brand new in La Crosse, how could I say no? I couldn’t, especially when she was kind enough to visit their website (escapelacrosse.com) and then call to book the room.

Farley asked us to arrive about 10 minutes before our noon appointment, which gave him time to go over the rules and get us to sign a waiver, which basically boils down to “You break it, you buy it.” He was very clear: if something is nailed down, leave it nailed down. Please don’t break the rooms.

Farley has four rooms that he works hard to make fully immersive. Each room comes complete with its own back story and unique puzzles that challenge his customers and his own carpentry skills.

Our group fell down the rabbit hole and got trapped in the Mad Hatter’s Tea Party. Rather than the buffoonery of Disney’s Mad Hatter from the 1951 movie, who let Alice go after wishing her a very merry unbirthday, the one who rules The Great Escape’s tea party isn’t inclined to let his visitors leave.

To get out, we had to solve a series of puzzles, which I won’t share to avoid any spoilers, but I will say the struggle is real. With the time limit putting an extra layer of pressure on, suddenly things like simple math become a challenge. We used two of our three hints and made it out with just seven minutes of our hour left.

After our trip through Wonderland, Farley was happy to chat a bit about what running the business has been like since it first opened about a month ago.

I was surprised to learn that the escape rooms are great for families; Farley says he’s had people ages 8 to 80 come in and knock out the room.

“Everybody has had just a ridiculously good time, which is awesome,” Farley said.

For families on the lookout for something they can all do together and enjoy, the escape room fits the bill, even for families with adult kids like mine.

“Parents and kids both have a blast,” he said.

Farley gets a kick out of watching kids, particularly between 8 and 13, lead their parents through the puzzles.

“They’re my personal favorite to watch. They do really well in the Mad Hatter Room,” Farley said.

While adults tend to get a little lost in the tea party, the youngsters are pretty observant and more practiced at the kind of problem-solving needed to get out of there before the Hatter returns.

“There is definitely stuff that (adults) just over-think, try to think too much about, or they just miss what’s sitting right in front of them,” Farley said.

Though he gets a lot of families and friends, The Great Escape gets a fair amount of company team-building events too. It works out well because everyone is working together toward a common goal, rather than things like bowling or after-work drinks.

“All these things are great for camaraderie and social hour … but to actually build a team and from a management standpoint see who your real leaders are is such invaluable information,” Farley said.

Farley’s advice to newbies is to go in with an open mind and “put your thinking cap on.”

On the more practical side of things, weather is a serious issue when it comes to booking a room.

“It depends on the weather. If it’s nice out, we’re slower. If it’s rainy, oh my god, it’s busy,” Farley said. “Last Saturday (July 23), when the first crack of thunder came, we booked up solid.”

WHAT: The Great Escape of La Crosse

COST: $25 per person or $160 for private room rental for up to eight people

The Great Escape of La Crosse owner Toby Farley and game master Brooke Robison monitor a team’s progress while the team attempts to escape from one of the four rooms in The Great Escape.

The Great Escape of La Crosse owner Toby Farley gives a team a hint as they begin to struggle with a puzzle in one of the rooms. 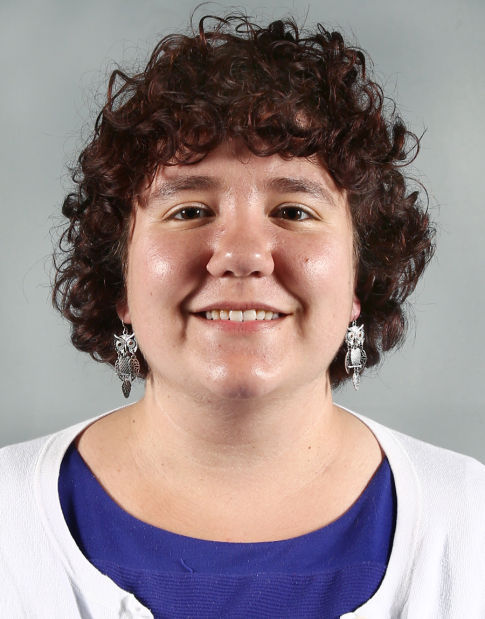