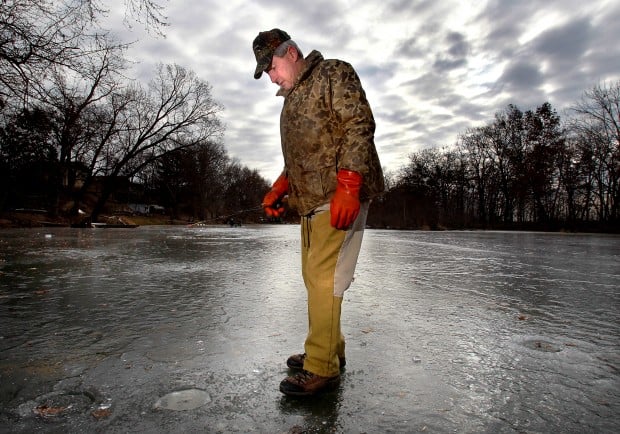 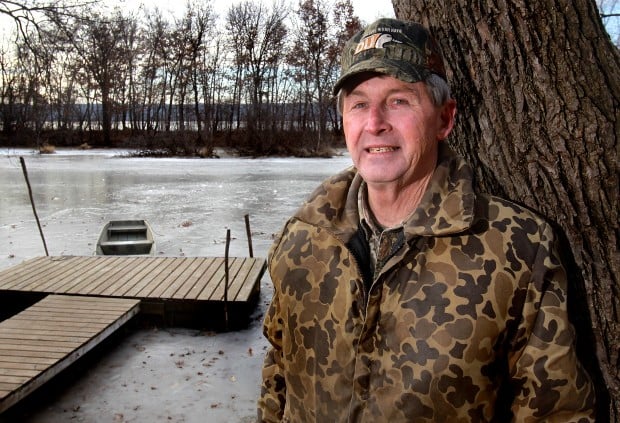 Marc Schultz, a former UW Extension agent, spent his retirement leading local government and other organizations. Through it all runs a theme of making the area better by conserving natural resources, particularly his beloved Mississippi River. PETER THOMSON photo

BRICE PRAIRIE — Marc Schultz knows the river. The forces, glacial and political, that shaped it. The fish — bluegill, perch, bass, walleye — that swim in it. The Chinese elm, black locust and other invasive species that have taken over its shores.

He notices details. The angler with his ice auger off the Brice Prairie shore line — "Buddy, if you're drilling there you've got about a foot of water," he mutters — or the gap where someone cut down the trees along the levee.

His knowledge is as wide as Lake Onalaska, the Wisconsin-shaped section of the Mississippi River that he's spent the past three decades fishing, hunting and fighting to protect.

Whether planting white oak seedlings, building fish cribs or sitting through thousands of hours of meetings, over three decades Schultz has been a tireless advocate for the river and its users, first in his 22 years as a community development agent for the UW Extension service and since as a hyperactive volunteer.

"The guy really loves the river," said Jim Nissen, refuge district manager for the U.S. Fish and Wildlife Service, one of the many state and federal agencies tasked with management of the river. "He has a passion for the river - the river and people's use of the river."

Outdoorsman, educator, encyclopedia, bridge builder: These are the words people use to describe Schultz.

Often in the background, he has brought his unique confluence of knowledge — of the natural world and the political process — to bear on what he considers the region's most valuable asset.

"I've noticed him being really instrumental in communicating with the right people at the right time to get things done," said Rick Kyte, who's active in waterfowl and fish conservation groups. "Different people or agencies going in different directions - Marc is making phone calls to get them together."

It was for his cumulative conservation efforts that Schultz was selected as the La Crosse Tribune's Person of the Year for 2011. Executive Editor Chris Hardie said the paper in the past has recognized politicians, business leaders and "super volunteers."

Schultz, 65, grew up in Chippewa Falls, where his father was a carpenter. His brother, six years older, left for the Catholic seminary when Schultz was in third grade. Schultz jokes that they each grew up as only children.

He spent his summers at his grandparents' lake property, where he fished with his father and grandmother. At first he caught crappie and bluegill. Later he learned the bass were along the north shore just before sunset - if you could stand the mosquitoes.

He memorized trees by their individual characteristics - a crooked trunk, a twisted branch - and could walk out of the woods in the same spot he entered. He learned to navigate a boat by reading the texture of the shore, looking to the side and behind, knowing the river would look different coming back. Urban navigation didn't come so easily.

"Everything in the city looks the same," Schultz says. "A building's a building."

While studying natural resources at UW-Stevens Point, he worked for Northern States Power during the summers building campsites and boat landings on the Lake Chippewa Flowage as part of an agreement between the utility and the Department of Natural Resources.

It was there he got his first exposure to the ways politics and policy affect resources.

"I got a sense that's where all the decisions were made," he said. "And that it was important for the public to put its two cents in."

When he returned from four years in the Air Force, where he worked in public health, Schultz focused his graduate studies on the procedure through which the federal government decided not to renew NSP's license to operate the dam. He concluded that - with certain stipulations - it would have been in the public interest to let the utility keep it.

"The public paid for (the Flowage) twice," he said — first when the public utility acquired it and again when the government bought it back.

After a few years with the DNR and U.S. Geological Survey, Schultz landed with the University of Wisconsin Extension Service, where he first worked as a water quality educator in Waukesha County and learned that public education is as much about listening as it is teaching.

In 1981, there was an opening for a community development agent in La Crosse - where his brother was living and his grandfather, Carl Semsch, had been a successful window decorator - and Schultz decided he'd had enough of southeastern Wisconsin.

His job was to be a resource for economic development, natural resources and local government.

Schultz said he looked around to see "what's not getting done." He noticed missed opportunities - restaurants along the river without even a window on the water.

"It's almost like they ignored the river," he said. "My message was you're ignoring that river, and it's got a strong economic reality."

Schultz proved to be as adept at navigating government as he had the wilderness.

"He's got a savvy about him. He understands the political pendulum," said Don Heidel, who serves alongside Schultz on the La Crosse County Conservation Alliance. "His modus operandi is getting things done. He's not one of those hidden bureaucrats that sits on an issue because it's safer. He is a doer."

A product of the 1960s, Schultz said he learned not to trust the system but also that those who don't participate shouldn't complain. He hasn't limited his civic involvement to the environment - he's in his second term as a supervisor on the town of Onalaska board and is vice chairman of the La Crosse County Emergency Planning Committee - but the river his passion.

His mantra is collaboration.

"What individuals do makes a difference, but it's what organizations and committees do that makes lasting difference," Schultz says. "Individuals come and go."

‘The right thing to do'

"He has almost unlimited enthusiasm and a kind of energy you don't find that often in ... people out in the public," said Ron Benjamin, the Mississippi River fisheries supervisor for the Wisconsin DNR.

People might have energy for a pet project - or when there's an issue that affects their home, Benjamin said. "He has been able to channel energy on a million different topics for 30, 40 years. That is very, very uncommon."

Schultz doesn't seek recognition but acts out of a deep concern for the environment, said his wife, Sue.

"He just does it because it's the right thing to do," she said.

Those who've worked with Schultz say he has a holistic approach to the river, which serves as a commercial navigation channel, an international flyway for migratory birds, and a magnet for a plethora of recreational users.

"He's not just looking to fence it off," Benjamin said.

More than one person who's worked with Schultz drew comparisons between him and Fred Funk, the 89-year-old founder of the La Crosse County Conservation Alliance.

"Fred is kind of the godfather of the river," said Heidel, who served with Schultz on the alliance board. "Now that he's had to step back because of his age, Marc has stepped up."

Recently Schultz has turned his attention to new issues affecting the region's natural and economic resources - sand mining, high voltage electrical transmission lines that threaten some of the county's most developable land.

But his focus remains the Mississippi.

Schultz says: "The river's really what it's all about."

From Tribune files: Our past Person of the Year winners

Marc Schultz, a former UW Extension agent, spent his retirement leading local government and other organizations. Through it all runs a theme of making the area better by conserving natural resources, particularly his beloved Mississippi River. PETER THOMSON photo