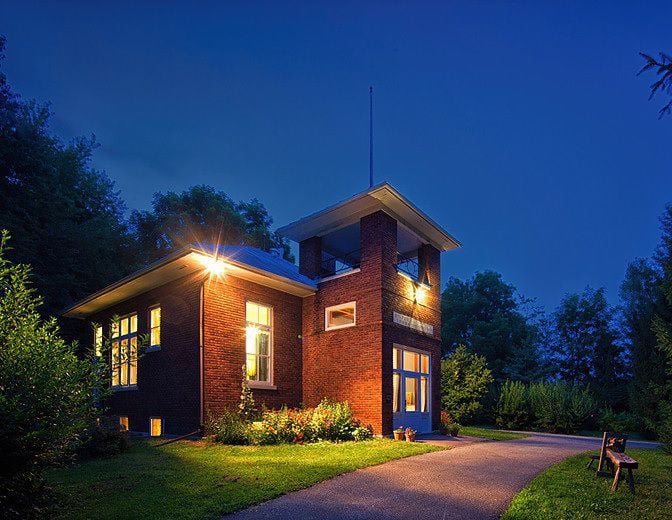 The Wilson Schoolhouse Inn at night. 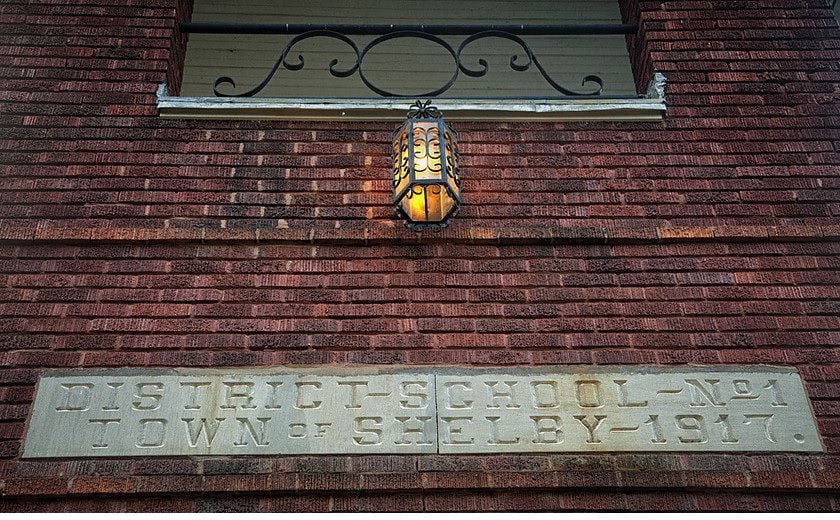 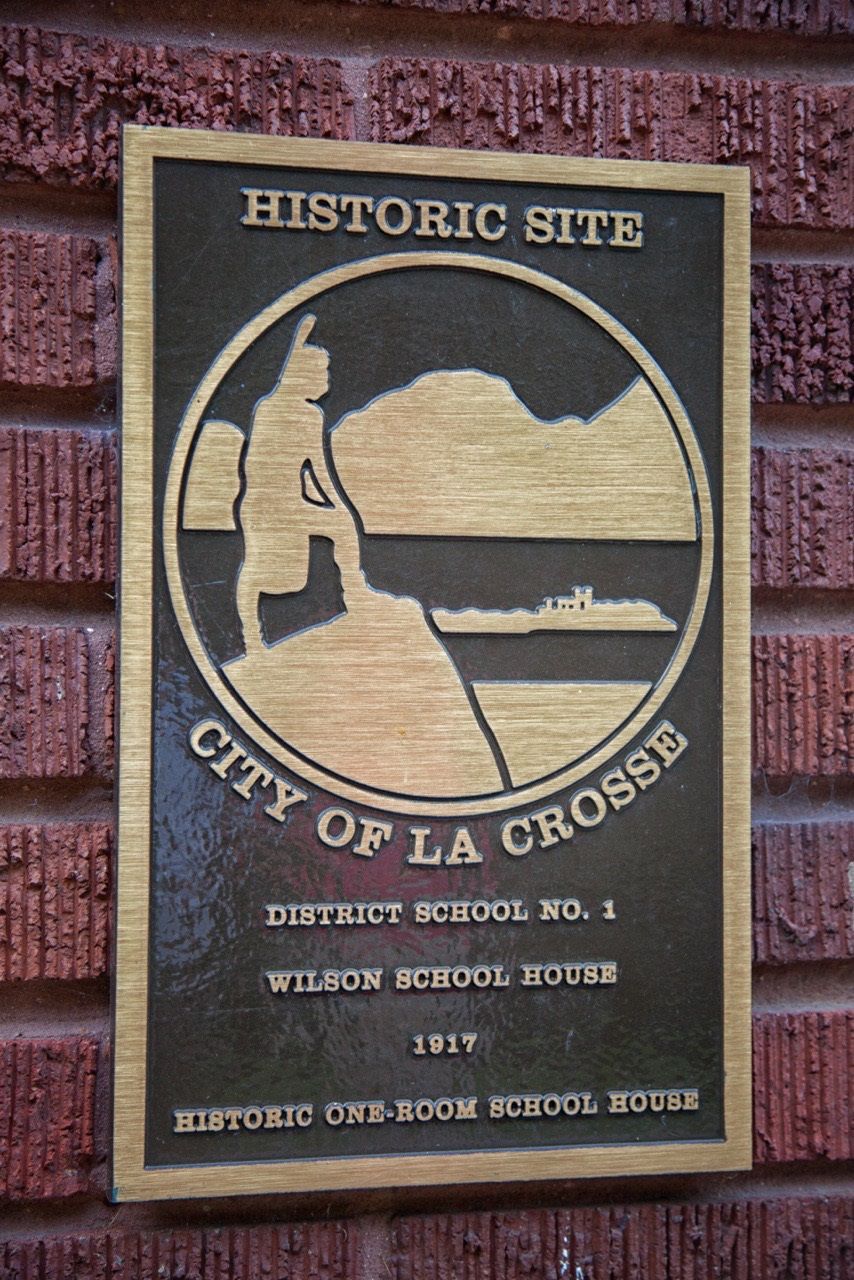 The Wilson Schoolhouse was named a Historic Site by the city of La Crosse in 1996. 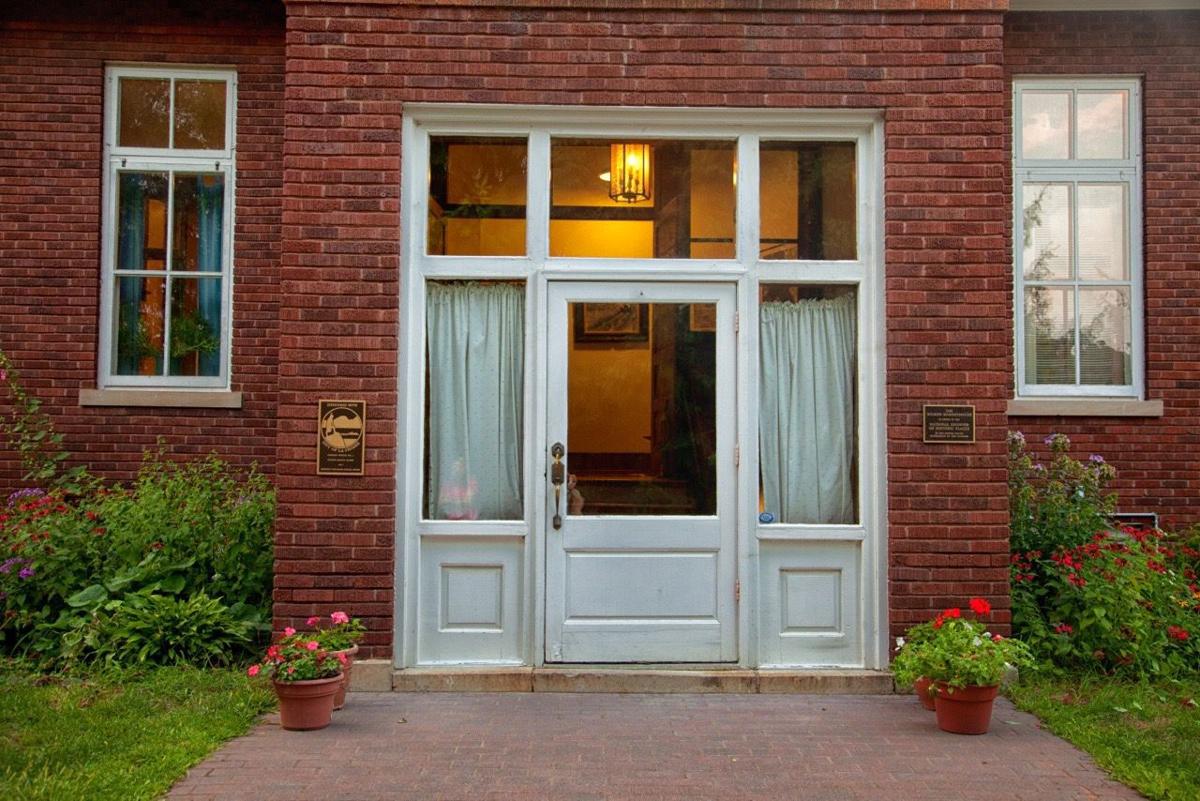 Behind the handsome brick facade of the historic Wilson Schoolhouse, 99 years of memories remain nestled between the thick walls of the former one-room school.

The school, which operated from 1917 to 1965, remained empty and severely damaged by vandals before being purchased in 1986 by Richard “Dick” and Lisbeth Reynertson.

The Reynertsons, who also own a home on the 12 acres of land on which the schoolhouse sits, originally bought the building simply to save it.

“It’s located right on the highway,” Lisbeth explained. “We didn’t want it destroyed for road widening or construction.”

The building was named a Historic Site by the city of La Crosse in 1996, ensuring its protection. The schoolhouse, District School No. 1 in Shelby, was erected after the previous 1880 stonewall school was demolished.

The Reynertsons left the school untouched for nearly a decade before hooking up the water and electricity. Having been neglected for so long, the schoolhouse was in need of major repair. After deciding to renovate the building into an inn, the Wilson Schoolhouse Inn, they got to work repairing broken windows in the basement and the bowed flooring. The ceiling was sagging due to people stealing the light fixtures, and snow and rain had seeped in.

Dick sanded the long-plank wood floors, and all the ceiling-high windows are original. A built-in glass door bookcase, numbered row of coat hooks and the chalkboard remain preserved as well. The ceilings have been replaced, and a hardwood door identical to the original frames the entrance. The stone basement has been renovated into bedrooms and a sitting room, and a full kitchen was added on the main floor. The open floor plan was inspired by the school’s one-room layout.

“It was important for us to retain the original atmosphere,” Dick said. “It has been modified, but not excessively. We didn’t break it up into rooms.”

Guests are privy to the entire building during their stay. The three year renovation is commemorated in an album on the desk, and family friend Roger Grant took photos of the finished results, capturing everything from the placards by the door to the engraved title above the entrance.

“There used to be a bell tower at the peak,” Lisbeth said. “The basement was a rec room for the students, and in later years bathrooms were there as well. Under the stairs was the only dark area, so that’s where the kids watched films.”

The sturdy brick and stone school was built for $5,000, considered a needless luxury at the time.

“Most schools were wood, but they didn’t last,” Dick said. “This building is so solid, you can’t hear the cars from the highway. It was the best building in Shelby.”

About 20 students would attend the school at one time, separated into grades 1-8. A single teacher, usually not much older than her pupils, would teach each group. A stove in the corner served to heat food for lunch. The building also served as a community gathering place for holiday parties and the mother’s club.

Lisbeth, a member of the Preservation Alliance of La Crosse, has painstakingly compiled mementos of the school’s history, scouring archives and collecting letters and photos from past students and teachers. Among her treasures are class rosters, teacher contracts, worksheets, merit awards and class pictures.

“I love preserving the history and keeping the memories alive,” Lisbeth said. “Former students come back, and they appreciate we have the same floors. They point out where they sat.”

The Reynertsons have held open houses for people to share and reminisce. Lisbeth fondly recalls a woman’s delight at locating herself in an old black and white class photo, while Dick favors one man’s tale of discipline.

“A boy was being naughty, and the teacher made him go up and put his nose to the blackboard and stand on his tip-toes,” Dick recounted. “And then she let the other students throw erasers at him!”

The Reynertsons have had both locals and overseas visitors stay at the inn, often families with elderly members who appreciate the nostalgia. Some leave behind gifts, like a tree stump carved with the image of the schoolhouse.

“The people who visit are so generous and kind,” Lisbeth said. “This is a happy place. There are good memories.”

The Wilson Schoolhouse Inn is located at 5720 Hwy. 14-61, past Wal-Mart on Mormon Coulee Road. Email usdk@centurytel.net, visit wilsonschoolhouseinn.com or call 608-787-1982 for reservations.

The Wilson Schoolhouse Inn at night.

The Wilson Schoolhouse was named a Historic Site by the city of La Crosse in 1996.