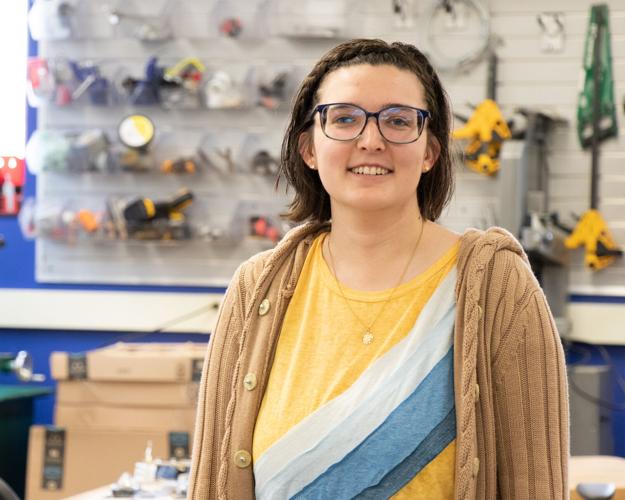 Brygida Boryczka, a member of the first graduating class of Viterbo University’s engineering program, also majored in applied math and analytics. She’s headed to grad school, on track to become a college professor. 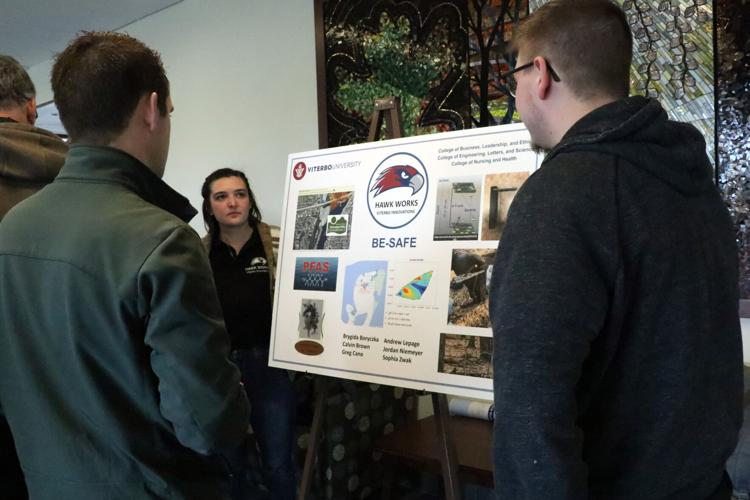 Some members of the first graduating class of Viterbo University engineering majors are jumping right into good engineering jobs, some on familiar territory because of their internship experiences. That’s what Brygida Boryczka thought she’d be doing when she started at Viterbo four years ago, but her education at Viterbo inspired her to become an educator herself.

A graduate of Appleton West High School, Boryczka chose to study engineering at Viterbo even though the program was brand new at the time, in part because the campus felt comfortable and the small class sizes would make it easier to ask questions and get to know faculty and fellow students.

“It seemed like they had a really good plan for the engineering program, and they were really prepared for it,” she said. “And when I visited the campus, it seemed less intimidating than other schools.”

Besides, La Crosse is a special place for the Boryczka family. Her mother, Barbara, and father, Bolek, met at the University of Wisconsin-La Crosse in 1995, both coming from Poland to study here. They came to La Crosse separately, and after returning to Poland, they married. In 1997, they came back to Wisconsin and started a family.

Growing up, Boryczka’s parents would only allow her and her older brother, Bartek, to speak Polish at home. “If I said something in English, they’d pretend they didn’t understand or say it back to me in Polish,” Boryczka said.

Being bilingual from an early age gave Boryczka an advantage in learning other languages. By the time she came to Viterbo she had studied enough Spanish to set her sights on double-majoring in engineering and Spanish.

When she started at Viterbo, Boryczka was intent on a career as a civil or environmental engineer. As a sophomore, she was encouraged by math Professor Sheldon Lee to make Spanish a minor and go for a major in mathematics, a field deeply embedded in engineering.

“Brygida is one of the strongest students I have had in my classes. She has a combination of raw talent and exceptional work ethic. Early on, I realized that I should grade her work first in order to catch any mistakes I might have made in my answer key,” Lee said. “She has a rare ability to retain everything learned from previous classes and is able to consolidate concepts in creative ways to solve new problems.”

She also was recruited to tutor in the university’s Academic Resource Center. She helped other students with their classwork in everything from computer modeling and calculus to theology and thermodynamics, and it rekindled an interest in teaching that she had harbored growing up.

“She was always my top recommendation as a tutor,” Lee said. “We are grateful for all of the work she has done at the tutor center on campus, as it can be difficult to find students comfortable with tutoring mathematics, especially upper-level courses.”

Graduating May 14 with a 3.98 GPA and two bachelor’s degrees (engineering and applied math and analytics), Boryczka is headed for the University of Minnesota-Duluth to pursue a master’s degree in mathematics and get some classroom experience as a teaching assistant.

Though she’s not starting a career as an engineer right out of college like almost all her classmates (seven of nine in this first graduating class), she said her engineering studies will always be a great asset. “My engineering education has given me many valuable skills, such as critical thinking and problem solving, as well as teamwork,” she said.

Two of this spring’s HAWK WORKS projects involved trishaws, three-wheeled, pedal-powered rickshaws. One project had a team designing and creating improvements in a trishaw owned by Bethany St. Joseph Corp. Another team worked on creating a smartphone app to make it easier for volunteer trishaw “pilots” to book their nursing home time slots in the hopes of better pilot retention rates.

Boryczka’s team, meanwhile, worked on a major environmental problem: PFAS contamination. French Island has drinking water issues because of well contamination by the so-called “forever chemicals,” and the team was inspired to do research after hearing about a Princeton University study that found a microbe that could break down PFAS.

The team set up a research project to determine whether the microbe, called “A6” for short, existed in the soil of the Black River bottoms owned by the Mississippi Valley Conservancy on the north end of French Island. The study results showed preliminary indications that A6, which thrives in an acidic, iron-rich soil, could be present in the project area. More research is planned for next year.

“I think it’s exciting that our work might be able to help with a problem that is really prevalent in the community,” Boryczka said.

In Photos: The Tribune's favorites from April

“Brygida is one of the strongest students I have had in my classes. She has a combination of raw talent and exceptional work ethic. Early on, I realized that I should grade her work first in order to catch any mistakes I might have made in my answer key.”

A 40-year-old La Crosse man was sentenced on Monday to 16 years after sexually assaulting a child who was 13 years old at the time, causing he…

Brygida Boryczka, a member of the first graduating class of Viterbo University’s engineering program, also majored in applied math and analytics. She’s headed to grad school, on track to become a college professor.