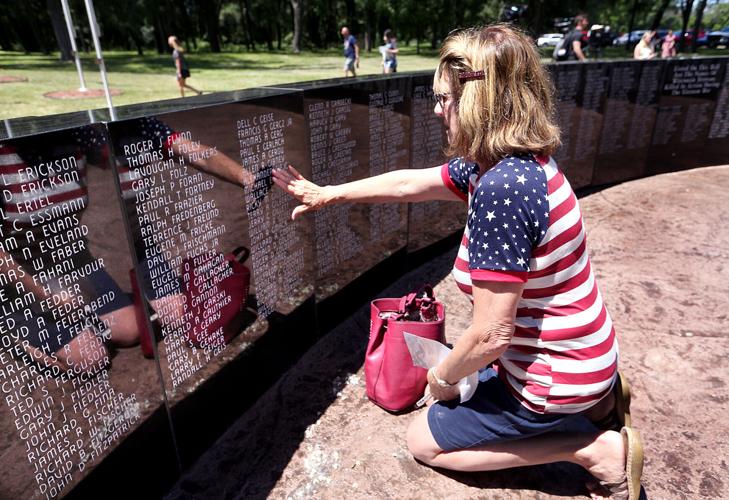 Connie Timmerman of Rice Lake kneels and touches the name of her cousin, Michael Giese, on the Wisconsin Vietnam Memorial on Thursday after a dedication ceremony at Veterans Freedom Park. Giese is among the 1,239 Wisconsin soldiers listed on the wall who served and died in the Vietnam War. 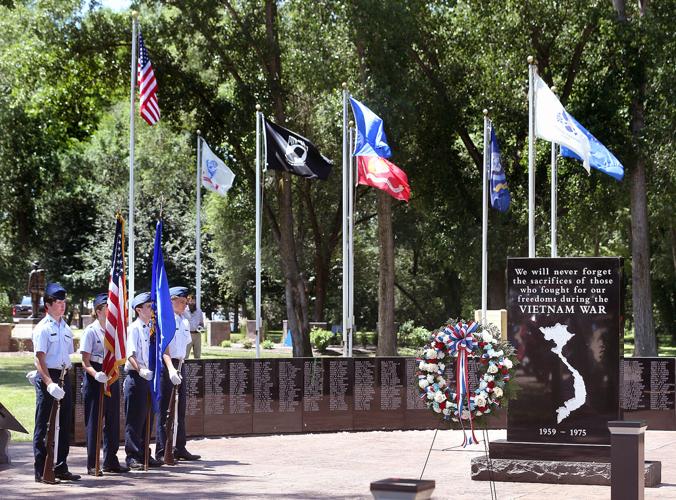 Members of the La Crosse Civil Air Patrol post the colors Thursday during a dedication ceremony for the Wisconsin Vietnam Memorial at Veterans Freedom Park.

The newest addition to La Crosse’s Veterans Freedom Park was unveiled on Thursday, honoring those who fought and lost their lives in the Vietnam War.

The project began about six years ago when Jordan Briskey, a 15-year-old Holmen High School student at the time, was inspired by veterans he had met to create a monument.

Now after years of fundraising and some hurdles, the monument is here.

The $250,000 project features a half circle wall that lists the 1,239 names of Wisconsin soldiers who died in Vietnam, a controversial war that ended nearly 50 years ago. A center monument depicts a map of Vietnam and art sketches of scenes from the war, designed by Michael Martino.

A sculpture of what is known as the “Battlefield Cross” welcomes visitors to the monument, and concrete benches and plaques with information fill the space out.

Advocates said the monument honors both the veterans, who were often mistreated, and their families, especially those that lost someone to the war.

Briskey said the importance of the project was, “Seeing them happy and seeing those loved ones be reunited in a way — they don’t have to go all the way over to Washington, it is right here at home.”

Vietnam veteran Jim Crigler described the emotional experience he had when he first visited the monument the day before.

Crigler was a “Huey pilot,” or an airman who flew a UH-1 utility helicopter during the war, a job that was dangerous and placed soldiers in almost daily combat.

Because of the danger, Crigler said he and his roommate, Thomas Shaw of Fond du Lac, made a pact to return home with the others’ remains should they die in combat — a promise that Crigler kept when Shaw was shot down in combat.

In April, Crigler went back to Vietnam and held a ceremony at the crash site.

“Believe me, I could feel the spirit of those men standing beside me,” Crigler said.

On Wednesday, Crigler was connected with Shaw once again when he visited the new Vietnam Memorial for the first time and found his name and the names of other friends on the wall.

“I think we must remember those that stood up and fought for our cause,” Crigler said. “And memorials like the ones we are dedicating today, in my opinion, have great importance. If we don’t honor and remember those that fought and sacrificed for our ideals, well those ideals could change, or they could go away.”

Crigler said he first met Briskey while giving a presentation at Holmen High School and he was first presented with the idea to create the monument.

Don Weber, of the Weber Group and an area philanthropist, said that Briskey “never gave up” while pursuing the monument, leading fundraising efforts and pushing through the thick of the COVID-19 pandemic to complete the project.

Briskey, who is now 20, said it was hard to get people to take him seriously when he first started fundraising for the memorial.

But it was important for him to keep going. He said it was an example of how important it is for younger generations to keep honoring America’s veterans.

“Hopefully young people my age can actually appreciate what we have,” Briskey said.

Visitors on Thursday spent time looking for the names of people they lost in the war on the wall.

The Vietnam Memorial is just the latest addition to a number of veterans memorials in the park.

Those that attended the dedication traveled to the monument by way of Louie Ferris Drive, named after a late North Side icon, veteran and longtime community volunteer, who died in December.

“It’s not long ago, just really a few years, that this park was just some scrub brush and this and that, and not much of anything,” La Crosse Mayor Mitch Reynolds said. “But now it’s a place of honor.”

Connie Timmerman of Rice Lake kneels and touches the name of her cousin, Michael Giese, on the Wisconsin Vietnam Memorial on Thursday after a dedication ceremony at Veterans Freedom Park. Giese is among the 1,239 Wisconsin soldiers listed on the wall who served and died in the Vietnam War.

Members of the La Crosse Civil Air Patrol post the colors Thursday during a dedication ceremony for the Wisconsin Vietnam Memorial at Veterans Freedom Park.