Pharmacies have not been immune to the nationwide shortage of health care workers, with turnover rates for pharmacy technicians surpassing 20%.

And with some 131 million Americans annually taking one or more prescription drugs — a $335 billion business, per Georgetown’s Health Policy Institute 2 — hospitals and drugstores can’t afford to lose efficient, competent and well-trained staff.

In 2021, around 10% of pharmacy administrators nationwide reported they had lost at least 41% of their technicians. Locally, Gundersen Health System, Mayo Clinic Health System, Walgreens and other entities have openings for pharmacy technicians, and Gundersen is incentivizing candidates by offering paid training.

There only a few such programs in Wisconsin, says Jim Wolff, lead pharmacist at Gundersen. In addition to receiving compensation for on the job learning, and full benefits, trainees are saved the tuition of undergoing the same education at a technical school.

“The paid training does help many workers,” says Wolff. “The program is definitely concentrated (12 weeks). You can complete it quickly and be ready to take on a job.”

Upon conclusion of the program, trainees can take the national pharmacy technician certification exam. Passing the test qualifies them for a full-time position, and the “vast majority” opt to remain at Gundersen.

At present, Gundersen locations are looking to fill around 15 pharmacy tech positions. Health care workers in many positions have been in short supply for years now, an issue that was exacerbated by the pandemic. But one reason pharmacy techs are in such demand is the lack of exposure of the position and what it entails.

And what is visible to patients — answering phones, filling prescription bottles — is only a fraction of the responsibilities.

“It’s not just taking calls and and typing on a computer,” Wolff says. “They are the heart that keeps the pharmacy going.”

Barbara Ranzenberger, a certified pharm tech and pharmacy IV specialist at Gundersen, entered the profession as a paid intern.

Her career goal was to help people, and her job allows her to engage in patient care from both a “behind the scenes” and interactive standpoint, starting IVs and prepping essential medications.

A shift at the pharmacy is not a sedentary one, and the ability to multitask, adapt and keep up with change is essential. Pharm techs could find themselves moving from the OR to the prescription carousel to the a hospital floor.

“I could be doing 15 to 20 different things” over the course of a few hours, Ranzenberger says. “My day is always changing.”

On the docket for a pharmacy tech are the typical tasks — triage of calls, repacking meds into unit doses, inventory stocking, dispensing and delivering medications — in addition to assignments unique to recent years.

“We no longer have the drugs we need readily available to us from the manufacturers. It’s something that is relatively new to pharmacies and the health system in the last decade,” Wolff says. “We’ve seen a rapid increase in the number of drug shortages, drug availability and drug discontinuations from the market, which ultimately results in us having to figure out ways to get the medications needed by new means.”

Pharmacy techs have the integral role of mixing, combining or altering ingredients in order to ensure patients have the specific formulation needed for their treatment.

“A lot of times that means working with our technicians to compound drugs we’ve really never compounded before,” Wolff says.

The FDA’s current drug shortages list covers a wide range of health concerns, including psychiatric, cardiovascular, anti-infective and pediatric oncology medications. And while the number of annual new drug shortages has declined, a 2021 FDA report shows over the past three years over 200 drugs per year have been of limited stock.

Drug shortages, the FDA stresses, can “pose a significant public health threat that can delay and in some cases even deny critically needed care for patients.”

In 2021, the FDA’s Center for Biologics Evaluation and Research and Center for Drug Evaluation and Research worked with manufacturers to prevent 317 drug shortages. The number of new shortages last year totaled 41, compared to a peak of 251 in 2011. But health care services company Vizent has pinpointed 265 items, including acute or chronic treatment drugs with no alternatives, high impact or pediatric impact drugs, and antibiotic resistant drugs, for which a lack of availability would prove most dangerous.

Items such as syringes are often on back order for hospitals, and one item of low supply, Wolff says, are certain anesthetics used in surgery and within the hospital.

“Our staff have to take on the responsibility of not only making and compounding drugs we had before but breaking down large volumes of drugs into smaller ones so we have enough to be spread across all of our patients,” Wolff says. “We’re a creative bunch. We’re given what we can and from that we have to make enough. It may mean reformulating things in different ways than initially intended so they (meet the specifications) that a physician may need for a procedure.”

The responsibility is great, and the role ever evolving, but for Ranzenberger it’s worth it.

“You work with a lot of wonderful people — NICU nurses, ICU nurses. I’ve made a lot of friendships throughout the years, not just in the pharmacy,” Ranzenberger says. “I consider pharmacy the backbone because everything starts with us. If you are in an accident and need pain medication, it starts with us. If you have a pharmacy order, I’m the one that makes that for you. I’m the one that makes that starter IV for a baby that was just born. It’s rewarding to know the work that I’ve done helps somebody.” 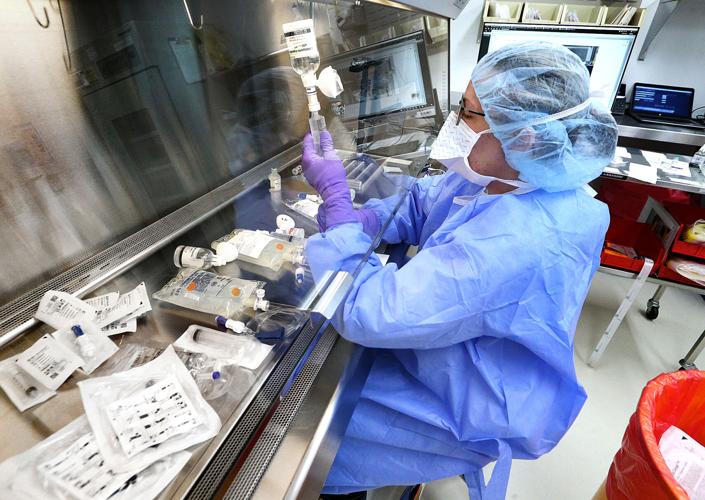 Gundersen Health System pharmacy tech Brooke Meyer prepares medicine for chemotherapy patients at one of Gundersen’s infusion centers. Hospitals are facing a shortage of pharmacy techs, which are key in keeping the flow of vital medicines to patients running smoothly. 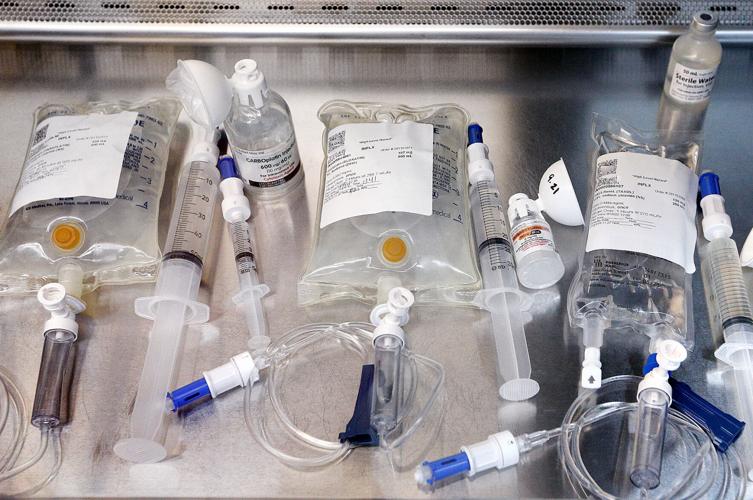 Chemotherapy medicine orders are filled at an infusion center at Gundersen Health System. Because of a shortage of pharmacy techs, Gundersen is paying new hires while they train.