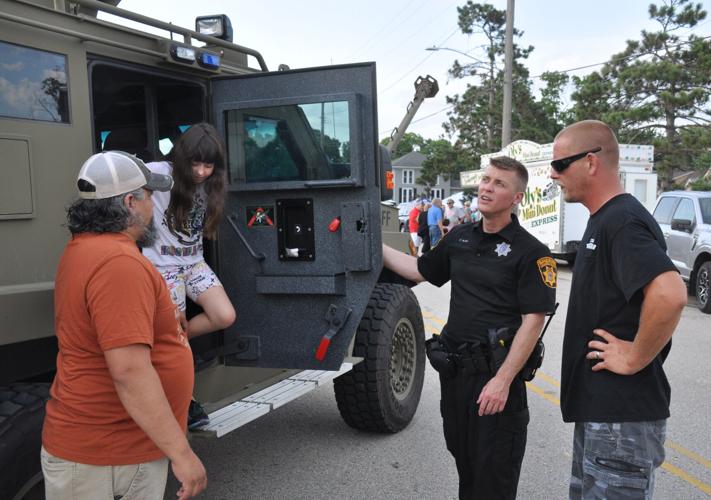 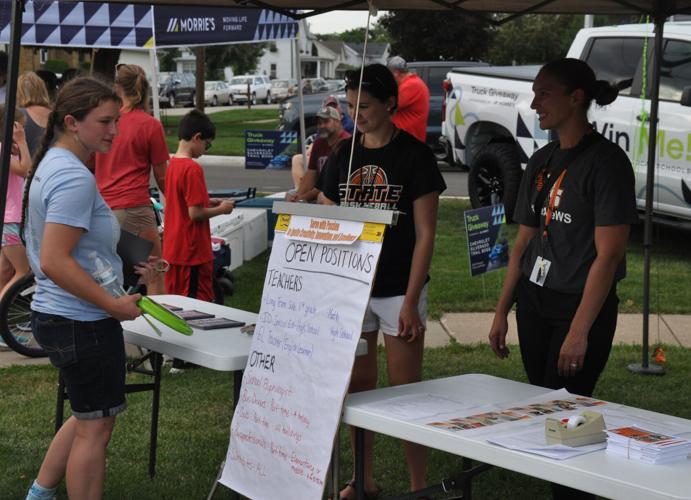 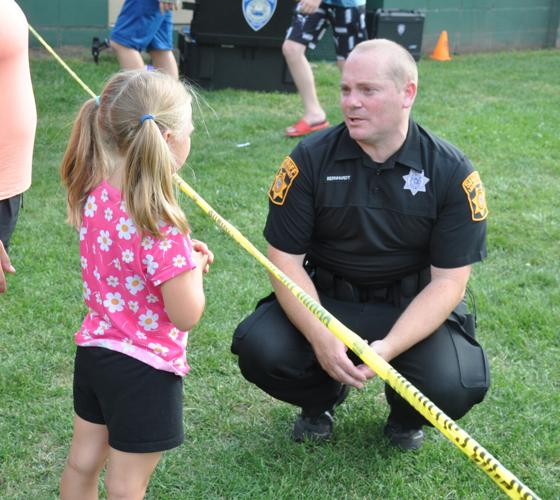 La Crosse County Sheriff's Office deputy Cody Bernhardt chats with a youngster about the importance of seat belt use. 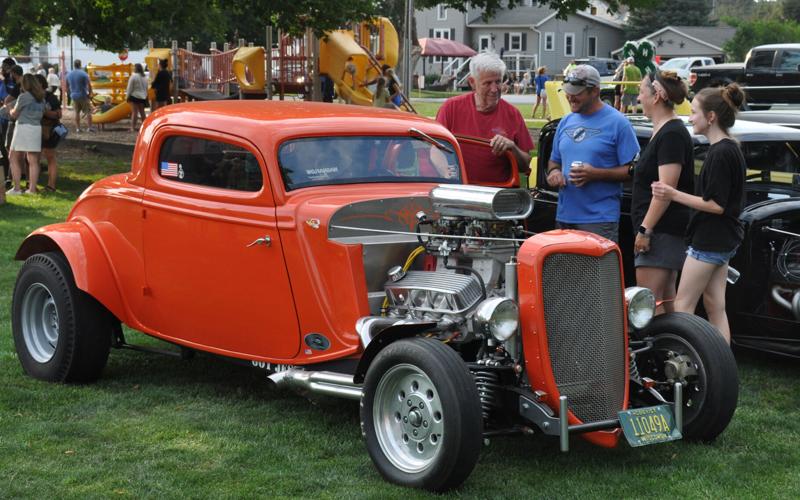 A 1934 Ford two-door coupe was among the classic cars on display during National Night Out in West Salem.

Monday morning it went to Jackson County, where two burglary suspects were reportedly holed up inside a tavern.

Tuesday evening it went to West Salem, where it was one of the featured attractions of National Night Out.

“It can stop a 50-caliber round,” said La Crosse County Sheriff’s Office deputy Peter Sloan. “It has the capabilities to keep officers out of harm’s way in potentially dangerous situations.”

National Night Out is a nationwide event in which the public is invited to meet with law enforcement and first responders and get a close look at the vehicles and equipment designed to keep communities safe.

The Lenco Bearcat was set up at the edge of Village Park and was a popular attraction. Children and adults were invited to step inside and check out the features that assist police during high-risk situations. Sloan said the Bearcat is a valuable tool that La Crosse makes available to neighboring counties.

“Any police department can call us and have access to our resources,” Sloan said.

A short distance from the Bearcat was the “convincer,” a machine that simulates what happens when an occupant isn’t wearing a seat belt during a 30 mph vehicle crash. As the vehicle rolls, an adult dummy is ejected and lands on the ground, while a belted child remains securely inside.

“It makes an impression,” said sheriff’s deputy Cody Bernhardt. “Most (kids) say, ‘Oh, I bet he was hurt really bad.’ “

Bernhardt welcomed the chance to educate the public on seat belt use. He said roughly half of the 42,000 people who are killed annually in vehicle crashes aren’t wearing seat belts.

“If you’re expelled from a vehicle, your chance of survival is very low,” he said. “The best way to make your vehicle safer is to wear your seat belt.”

There were more than a dozen National Night Out gatherings held across La Crosse County. The one in West Salem was hosted by the sheriff’s office and featured more than 20 tables representing public safety organizations, businesses, health care providers, non-profits and schools. The event also included free food, movies, music and games.

The West Salem School District took advantage of the gathering to promote multiple job openings in the district and remind people that the 2022-23 school year is just around the corner.

“We start four weeks from yesterday,” said Samantha Schmitz, the district’s human resources director. “I think people are ready to get back into the swing.”

ONALASKA — A Florida developer plans to acquire, remodel and add on to the former Shopko department store at 9366 State Road 16 in Onalaska — …

After a rocky few weeks for the La Crosse School Board, Rob Abraham announced on Monday that he was resigning from the board immediately, citi…

A 17-year-old La Crosse male faces felony battery charges after he allegedly beat a woman in the face Aug. 1.

An alleged drug dealer is being held in the La Crosse County Jail on a $100,000 cash bond.

Two arrested after altercation with police in La Crosse

Two individuals were arrested Aug. 4 after an altercation with officers.

Three men are in custody after they allegedly committed an armed robbery Tuesday in La Crosse.

Pedestrian killed after being struck by vehicle in Monroe County

A pedestrian is dead after being struck by a vehicle Monday in rural Monroe County.

A La Crosse man was arrested after choking and punching a woman following an argument in a store.

Charges were filed Friday in La Crosse County Circuit Court against three men arrested for holding a man at gunpoint and demanding money.

Archeologists make new discovery in the ancient city of Pompeii

Archeologists make new discovery in the ancient city of Pompeii

La Crosse County Sheriff's Office deputy Cody Bernhardt chats with a youngster about the importance of seat belt use.

A 1934 Ford two-door coupe was among the classic cars on display during National Night Out in West Salem.