The city’s sixth protest was again largely peaceful, this time organized by area high schoolers who wanted the event to look different than past protests.

Protesters gathered early at Copeland Park to make signs and T-shirts, with food and music playing, before hearing speakers and eventually marching through city streets.

“We wanted more people to feel comfortable, like we’re a community. We’re more than just the thugs that they know us as,” said Diariana Herron, another organizer and Logan student.

La Crosse’s protests have brought some change, like a new police department transparency page and promises of more community outreach on policies and plans.

But activists said it is still not enough.

“It definitely isn’t enough,” said protester Mariah Weisbrod, 24 of La Crosse. “I think that it’s been brushed under the rug so often, that some people might think it is enough.”

“And it’s not going to take just a couple weeks,” Weisbrod said. “It’s 400 years of oppression, you know? It’s going to take a long time.”

Some were critical of the steps the city had taken already, that the police department’s transparency page was hard to navigate and that local officials weren’t returning calls from citizens. Others hadn’t even heard of the measures taken so far.

At the same time protesters gathered on the city’s North Side Thursday night, the La Crosse Common Council met for its regular monthly meeting, where it discusses city issues and passes legislation — usually with few members of the community in attendance.

Officials have recognized that barriers exist between the process of local government and its community.

“It’s got to be a goal for those of us in office,” said Rep. Ron Kind, D-La Crosse, who attended the event on Thursday, saying he’s been doing a lot of “listening” lately.

He said officials need to be especially accessible to the youth in the community, who “often times feel that their voices aren’t heard, that they don’t count, they don’t matter. But look what they’re doing right now.”

When asked, most community members at the protest said there was a lot of work to be done to make government more accessible.

“We probably have access to it, but we don’t know how to get ahold of it or how to figure out how to go to these meetings when they’re happening, or even if we’re allowed,” said Kaliegh Gosa, 23 of La Crosse.

Others at the event felt similarly.

“It’s very organized. It’s not like you can do it when something happens, you have to wait,” said Lyndall Breaux, 14, La Crosse. “It’s not an easy thing to do.”

“And not necessarily at City Hall,” said protester Amy Dummer. “Go meet them where they’re at, and just listen.”

As communities across the country call to defund their police departments, protesters at Thursday’s event agreed that redistributing some of the La Crosse Police Department’s budget could be beneficial for the community.

“We have so much money going into a police force,” Gosa said. “I think putting money into it is OK, but all the excessive money needs to go into the community for other resources.”

The La Crosse Police Department’s steadily rising $11,716,833 budget is one of the largest of all the city departments, and is 17% of the city’s overall budget.

And when departments were asked to slash budgets last month due to COVID-19, the police department was required to cut less than 1% of its spending.

About $7.5 million of the police department’s budget is dedicated to paying salaries, $260,000 for overtime and $3 million for benefits. And according to the department, it has 98 sworn officials with authorization for 100.

Protesters said they thought some of the department’s budget could be spent on more mental health, substance and women’s resources, and be put back into the schools.

“We really need to be focusing on preventative methods, on supporting our students, before they need the intervention of the police,” Dummer said, who pointed out that many schools have police officers present but no school counselors.

Earlier in the week, Democrats unveiled a national police reform bill that would ban things like chokeholds, require more training and diversity in recruitment, raise standards in reporting, and pass a long-sought anti-lynching bill.

“I think that at the root of it is, do we need the police at every incident that’s occurring in our community?” Rep. Kind said of the calls for defunding police departments.

Though Thursday night’s protest was smaller than previous organized events, those who attended were energized by more young people of color sharing their experiences of racism in La Crosse.

“A lot of times when people talk about racism, they talk about the past,” Dummer said, who said she attended the protest because it was youth-led. “And these students specifically have already shared some of their stories about racism that they’re experiencing in our community right now.”

The young organizers were hopeful it would ignite change across generations, in a community where it might not seem like racism occurs.

“I’m only 15 and I’ve been through so much. Being hit, wanting to be white myself, and just wishing for a better life, and not loving the skin color I’m in,” Herron said, who sang “A Change is Gonna Come,” and shared her experience with suicidal thoughts while dealing with racism.

“And knowing I have younger brothers who are going to grow into the same thing?” she said, “I want to shut that down.”

"It's not going to take just a couple weeks (to solve this problem). It's 400 years of oppression, you know? It's going to take a long time."

The Common Council cut $4.42 million from the city’s operating budget. Of that, $525,000 came from the city library’s just over $5 million budget. 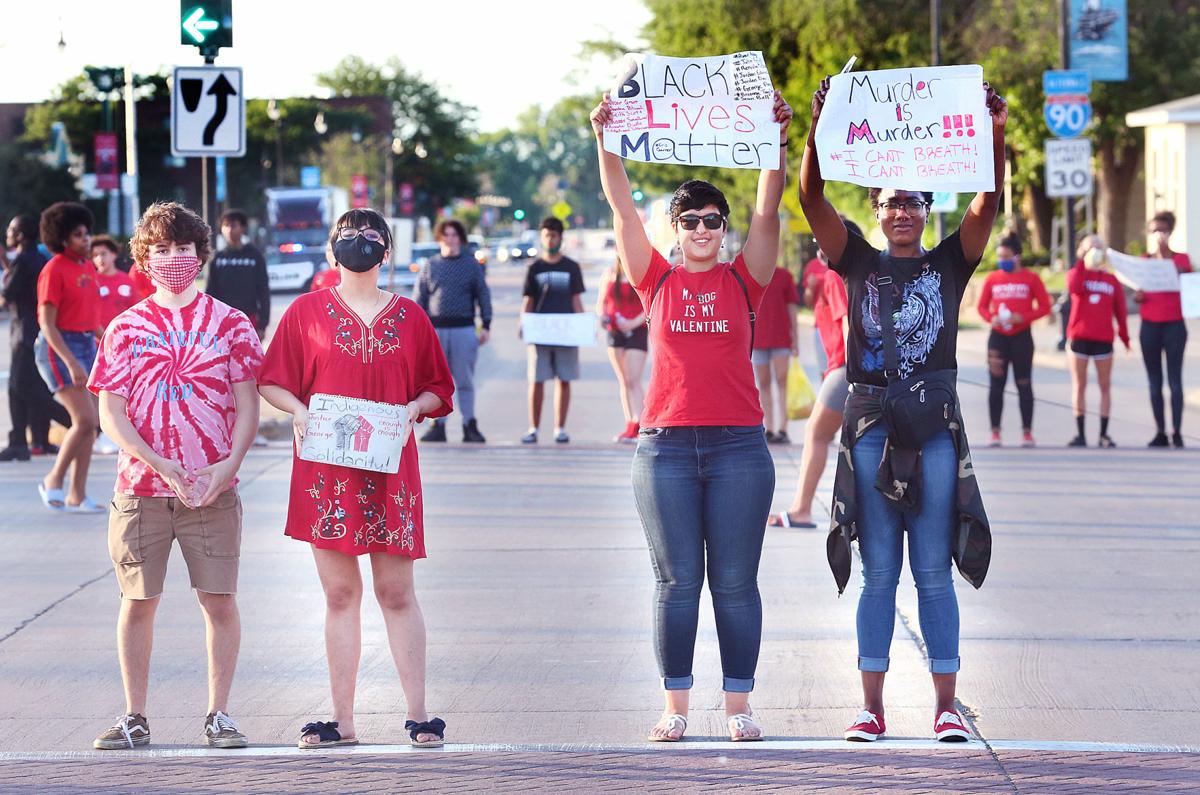 Protesters stand at the corner of Clinton Street and Rose Street Thursday temporarily blocking traffic during a youth rally against racism and police brutality. 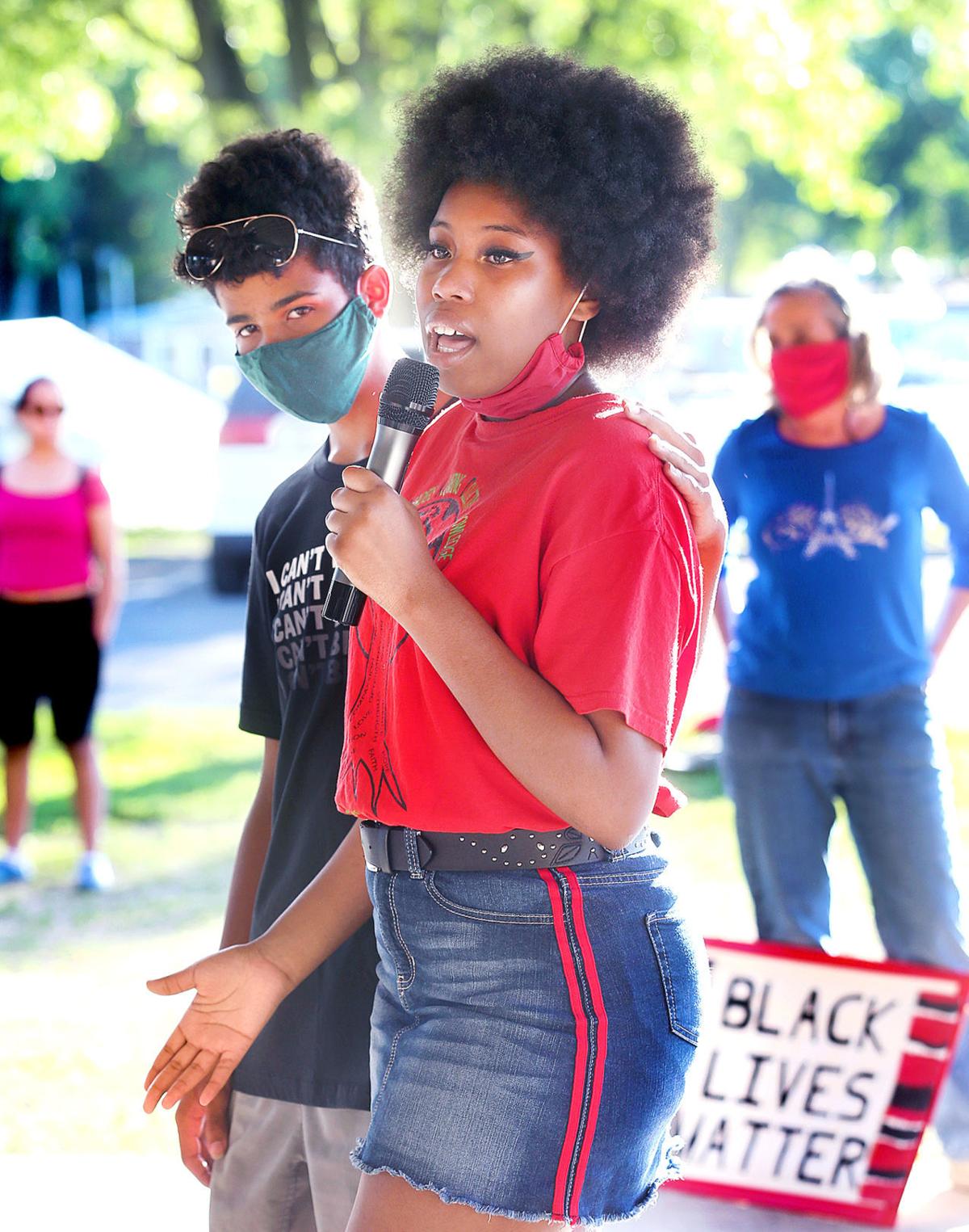 Diariana Herron, 15, speaks about her experiences with racism in the community at Thursday’s youth rally at Copeland Park. 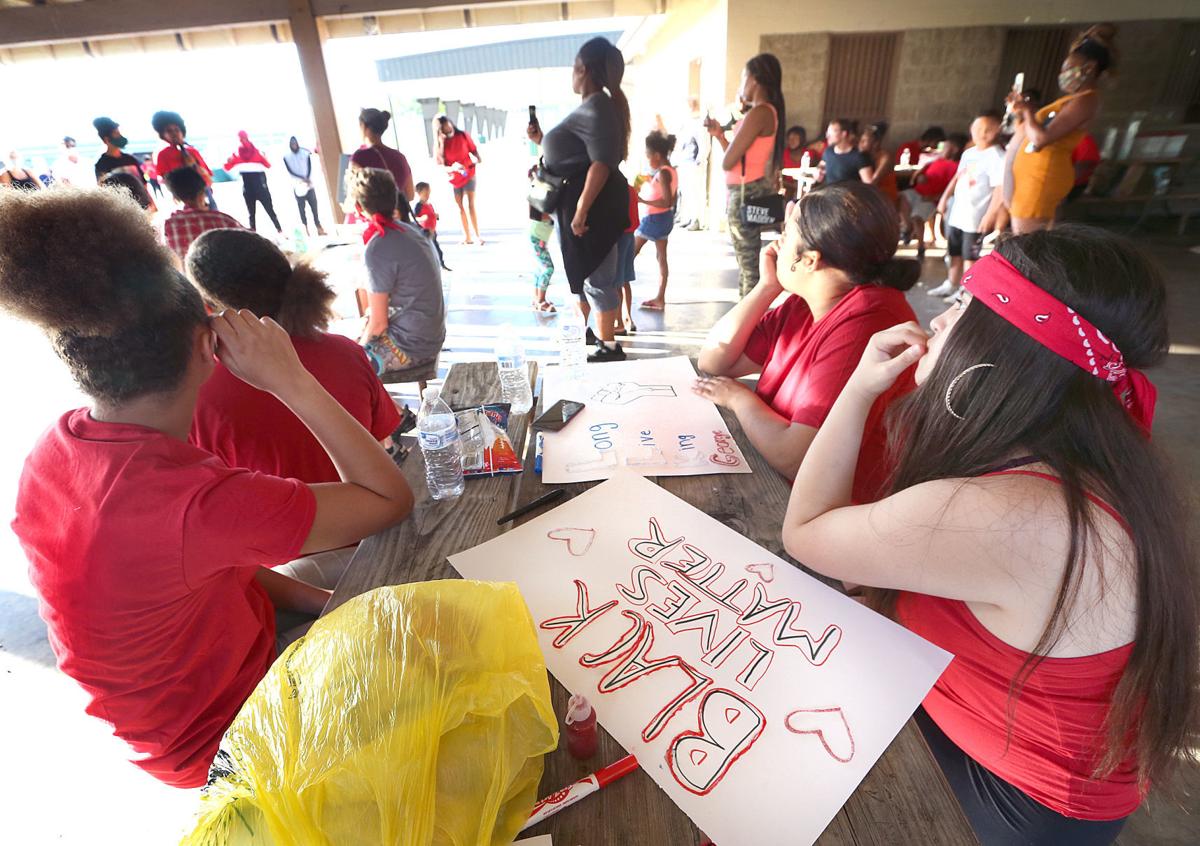 Youths and other community members listen to speakers Thursday at the Copeland Park shelter during a rally against racism and police brutality.