A dump truck is shown in a frac sand mine. 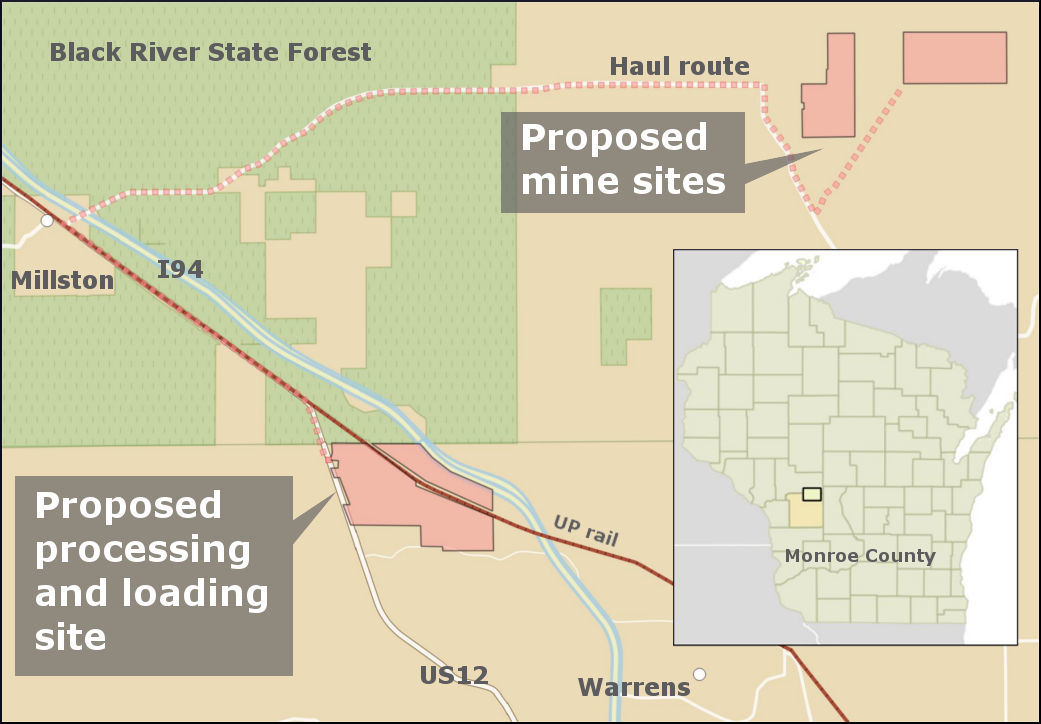 A Georgia investment company seeking to build a Monroe County frac sand terminal says if it isn’t allowed to fill 16 acres of pristine wetland forest, the current landowner will clear cut the land to pay off previous wetland violations.

Meteor Timber, one of the largest private landowners in Wisconsin, wants to build a processing and loading facility along Interstate 94 near the town of Millston to dry and ship frac sand the company will mine from a nearby site it acquired in 2014. The company expects to ship about 1.5 million tons of processed sand each year using the adjacent Union Pacific rail line.

Meteor applied in March to the Corps of Engineers and the Wisconsin Department of Natural Resources for permission to fill about 16 acres of wetlands, including about 13 acres of “pristine” hardwood swamp.

Both agencies have requested additional information, including an explanation for why Meteor could not find another site.

On Friday, a Milwaukee public relations firm announced Meteor was filing an amended permit application, 12 days after the Milwaukee Journal Sentinel published a story noting the 16 acres would constitute the state’s single largest loss of wetlands to a sand project and about 60 percent of all sand-related wetland permits issued by the DNR since 2008.

Meteor says it will mitigate the loss by restoring and preserving other wetlands — in excess of what the law requires — and will make additional environmental enhancements at the 752-acre site.

The plant is expected to cost about $65 million and will support an estimated 100 full-time jobs, according to the company.

The site, which Meteor says is the only feasible location close enough to its mine, includes about 558 acres owned by the A & K Alexander Cranberry Co., which was sanctioned in 2013 by the Environmental Protection Agency for illegally filling 5.6 acres of wetlands. As part of the penalty, the EPA required A & K to restore 2.2 acres of the filled wetlands and to get an “after-the-fact” permit for the rest.

According to documents filed with the DNR, A & K managing partner Marty Alexander took out a one-year loan for $321,470 in August to purchase wetland credits needed to settle the case.

Alexander did not respond to a request for comment, but in a letter to Meteor he said if the sale does not go through, clear cutting the property is his only way to avoid foreclosure.

“That’s what presents the demonstrable threat to the property,” said Evan Zeppos, a spokesman representing Meteor. “He has the right to go ahead and cut it if there isn’t a transaction.”

A memo from a forest management company owned by Meteor says when distressed properties are logged, the results are typically devastating.

“Every stick of merchantable timber is harvested,” the memo states. “(T)here are huge piles of tree tops/limbs near public roads, and is just raw dirt being eroded away by the weather.”

Sara Geers, staff attorney for Midwest Environmental Advocates, said while clear cutting would be an environmental loss, the DNR should not allow Alexander and Meteor to “hold them hostage.”

“No matter the trade-off, that’s not something the agency should be allowed to use in making its decision,” Geers said. “It sets a bad precedent that future landowners can use.”

The nonprofit environmental law firm, in partnership with the Ho-Chunk Nation, has urged the Corps to deny Meteor’s permit application as submitted.

In the updated application, Meteor vows to rehabilitate about 58 acres of wetlands on the site, restore about a third of a mile of Rudd Creek, which has been modified for cranberry farming, and to put 413 acres of the land into a conservation easement, which would protect it from all future development.

Geers said the problem is that Meteor is proposing to restore wetlands on its own site, which would not have the same level of governmental oversight as other wetland mitigation programs.

Wetlands are a key component of the ecosystem, acting as natural water filters and supporting a wide range of wildlife, including a disproportionate number of rare and endangered species. According to the DNR, Wisconsin has only about half the amount of wetlands it did when the first European settlers arrived. Most of those remaining 5.3 million acres are in the northern third of the state.

Both the Corps and the DNR have questioned the economic feasibility of the project, given a 43 percent drop in consumption of proppant sand from 2014 to 2016.

In spite of a recent industry slump, Meteor is in a unique position to have a profitable mining operation, according to an economic analysis prepared by a Pennsylvania consulting firm. That’s because the group owns land with large reserves of fine sands that are now in demand and if allowed to move forward would be able to load entire trains and put them onto the Union Pacific system, which would provide a direct link to Texas oil fields.

But according to the analysis, Meteor could not find another site on the UP line that could accommodate such a large loading facility, and drying the sand at the mine site would cost another $6 million and add 30 to 50 percent more operating costs.

Meteor has also said it would remove an old town road, reconnecting fragmented wetlands, re-introduce trout to the restored creek and install “eco-passages” designed to allow wildlife to pass under the rail spur.

Meteor wants to “make this an environmental win,” Zeppos said. “We think it demonstrates a big positive to the state of Wisconsin.”

MERRILLAN, Wis. — Ron Baerbock had never heard of frac sand when he moved to Jackson County in 2010.

Ron Baerbock had never heard of frac sand when he moved to Jackson County in 2010.

Despite a slump in the U.S. oil industry, Wisconsin frac sand producers are planning to spend millions of dollars on new plants and loading fa…

A dump truck is shown in a frac sand mine.