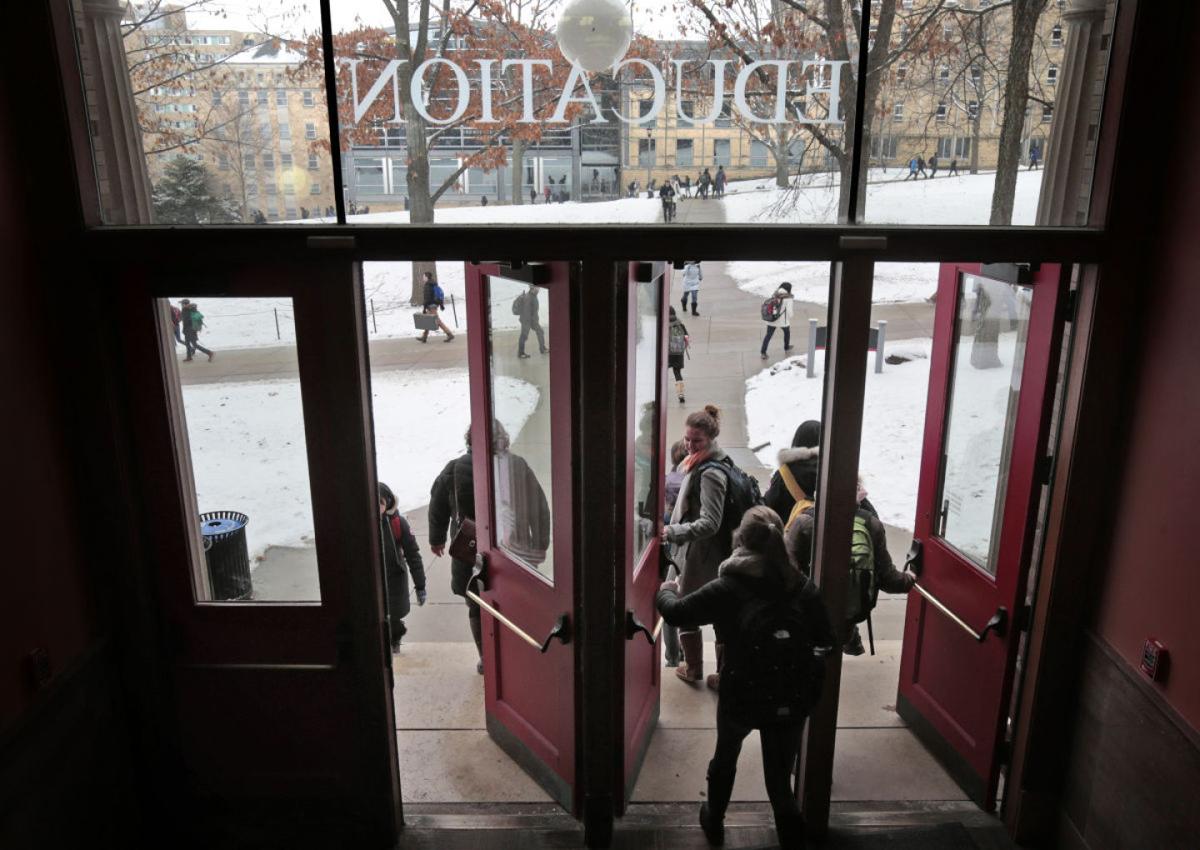 University of Wisconsin students enter and exit the Education Building between classes at the public university in Madison. In the background is Bascom Hill and the Law Building. In 2015, Gov. Scott Walker proposed a $300 million budget cut to the state's public university system and breaking it off from state control as a public authority. 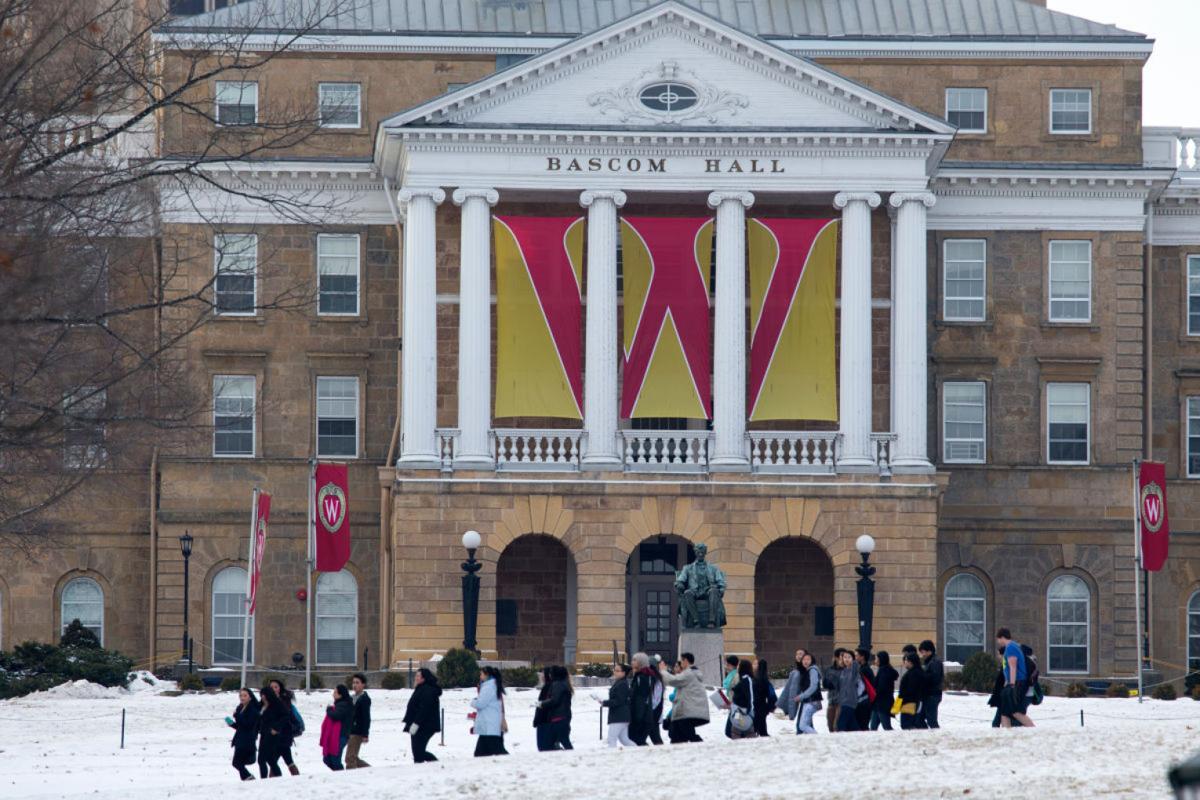 University of Wisconsin students cross Bascom Hill in front of Bascom Hall on the Madison campus.

MADISON -- Gov. Scott Walker’s proposed budget cut of $300 million to the University of Wisconsin System comes as other states, nationally and in the Midwest, have inched up funding for higher education, restoring support lost during the economic recession. More increases are expected in coming years.

“The numbers do seem to be improving,” said Lara Couturier, director of postsecondary state policy at Jobs for the Future, a Boston research nonprofit focused on education and employment for low-income Americans. “Since the dog days of the recession, the national picture is looking a little better but it doesn’t change the fact that there has been overall a declining investment in higher education by our states.”

Wisconsin is one of a handful of states that hasn’t restored funding in this fiscal year to where it was in 2009-2010, when higher education systems nationwide — in addition to most other public agencies — saw dramatic funding cuts due to the economic recession that started in late 2007.

Nationally, state support for public universities is up 10 percent since then, according to the annual Grapevine survey at Illinois State University. In Wisconsin, it’s down 4 percent even before the proposed 13 percent drop to come in the next two years.

Other state agencies will likely face similar budget cuts as the state tries to plug a $2 billion budget hole, although details won’t be known until Tuesday. Walker released details of the UW plan last week.

Campus leaders throughout the state have already warned of coming layoffs, with other effects predicted. The $300 million proposed cut would be the largest two-year reduction in history for the 26-campus system.

“They’ll increase tuition and they’ll look for out-of-state students,” Couturier said of Wisconsin campuses facing cuts. “It’s a rational response except we have an affordability problem in this country.”

In four of the last five budget cycles, the UW System took smaller but still significant state funding cuts. In all but the last one, the cuts were accompanied by the ability to raise tuition, which put more of the cost of college on students and their families. Tuition went up 141 percent for resident UW-Madison undergraduates from 2002 to 2012 and 43 percent for out-of-state undergraduates, according to the nonpartisan Legislative Fiscal Bureau.

Tuition will almost surely remain unchanged for Wisconsin residents at UW schools for the next two years, as Walker has proposed another two-year tuition freeze — the first came in the current 2013-15 budget cycle — which is supported by UW System president Ray Cross.

After that, the Board of Regents, which under Walker’s proposal would retain its role as the governance structure changes to a public authority similar to that which governs UW Hospitals and Clinics, would be able to hike tuition again. That piece of the plan has already drawn fire from student groups and state lawmakers. Frequent UW critic Sen. Steve Nass, R-Whitewater, has proposed an amendment to cap annual tuition increases at the level of the Consumer Price Index.

Nass, vice chairman of the Senate higher education committee, also is calling for the 18 members of the Board of Regents to serve three-year terms instead of the current seven-year terms. Sixteen of the members are appointed by the governor. Under the newly proposed structure, they’d have more authority than they currently do to set tuition, approve building projects and oversee employee pay and shared governance policies.

The budget cut, expected to be part of the 2015-2017 budget Walker will unveil Tuesday, comes with a promise for greater autonomy for the state’s universities, which have long argued that decisions about building projects, purchasing and personnel, among other topics, can be more effectively and cheaply handled outside the state’s sometimes onerous processes and rules.

The autonomy has unmistakable benefits, according to officials in Virginia, where lawmakers granted the state’s 15 public four-year colleges and universities similar freedom in 2005.

The structure is more decentralized than the one proposed in Wisconsin. There, each institution has its own board with broad authority over hiring and firing employees, setting tuition and fees, and overseeing the academic decisions on campus. The 2005 law gave them even more authority over spending on building and campus improvement projects, purchasing and technology management.

The Wisconsin model, at least as it’s been revealed so far, would still defer most of those decisions to the statewide Board of Regents. But putting the state in a background role should have some benefits.

“By and large I think they’d all say they’re happier running their own show rather than going to Richmond to ask permission,” said Peter Blake, executive director of the State Council of Higher Education for Virginia, referring to the commonwealth’s capital. “It’s almost human nature: Give me what I ask for and leave me alone.”

He cautioned that the lift to morale has not been matched in economic terms.

“I wouldn’t be under the illusion that it’s going to be a great money saver,” Blake said. “I think it’s not in the 300 million dollar range, that’s for sure. I think it might be in the low tens of millions.”

In Virginia, state support has dropped precipitously for higher education over the last two decades, similar to what’s happened nationally. State statutes require that the state fund two-thirds of each student’s education. In reality, it funds about 50 percent, with the rest left to students, Blake said.

“We’ve seen a spreading over the last five to eight years that we hadn’t seen before,” Blake said. “They used to be tightly bunched around a median. Now the market plays itself out a little more.”

A similar proposal is included in Walker’s plan. The UW System would “work with each campus to find a pricing formula that reflects the cost of each program” while still maintaining affordability and access, according to a system document laying out the plan.

Flags lowered to half-staff for Colin Powell in DC

Flags lowered to half-staff for Colin Powell in DC

Your brain's 'fingerprint' can be identified in just 100 seconds

Your brain's 'fingerprint' can be identified in just 100 seconds

University of Wisconsin students enter and exit the Education Building between classes at the public university in Madison. In the background is Bascom Hill and the Law Building. In 2015, Gov. Scott Walker proposed a $300 million budget cut to the state's public university system and breaking it off from state control as a public authority.

University of Wisconsin students cross Bascom Hill in front of Bascom Hall on the Madison campus.