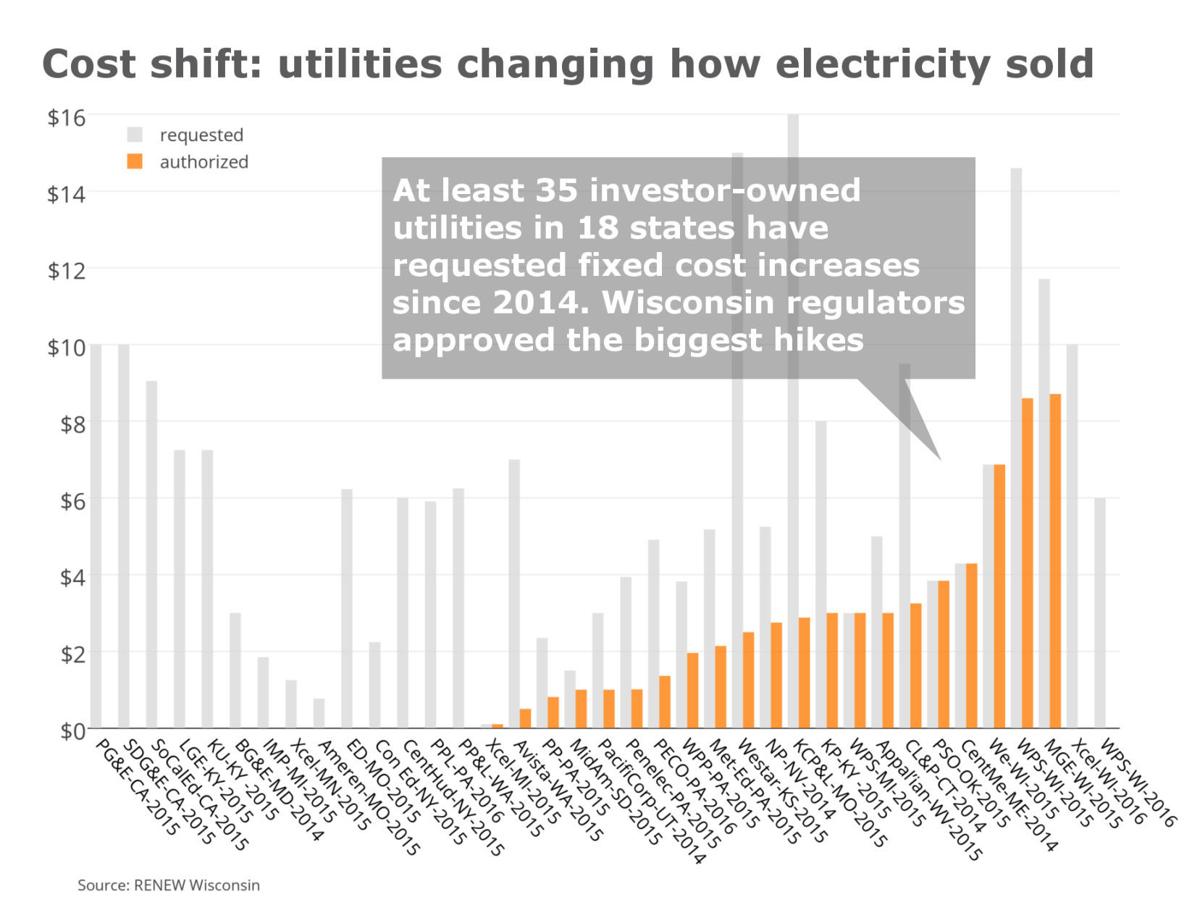 He and his wife turn off the lights as soon as they leave a room.

“We’re constantly watching the cost, and we do notice a difference in the price,” Krueger said. “It has reduced our energy bill. At least 10 percent. That means a great deal to us.”

More recently they added aerators and new shower heads to limit their hot water use.

So the 77-year-old retired Trane worker was not happy when Xcel Energy proposed raising the flat monthly fee on his electricity bill from $8 to $18.

“It’s counterproductive,” Krueger said. “They’re telling us at one point conserve energy. And we know that will keep our cost down. And now they want to raise the rate. I think that’s very unfortunate.”

Krueger is among the thousands of consumers who have lodged complaints about a fundamental shift in the way Wisconsin utilities are charging for electricity.

But despite a coordinated grassroots campaign, consumer and clean energy advocates expect regulators to approve Xcel’s request to more than double its fixed charge, requiring those who use the least energy to pay more to keep the lights on.

Decisions in three similar rate cases last year have led industry watchers to conclude that Wisconsin’s Public Service Commission – the three-person board that sets power rates – has embraced this policy favored by utilities but so far rejected .

“Over the past few years we’ve seen an increasing trend in utilities requesting … these higher fixed fees,” said Brad Klein, senior attorney for the Environmental Law and Policy Center in Chicago. “Wisconsin is the only state where these extreme increases have gotten any traction.”

A question of fairness

In requesting an overall 3.9 percent revenue increase, Xcel is proposing to actually lower residential electric rates by 0.7 cents per kilowatt hour and in return raise the fixed charge for about 225,000 residential, farm and small commercial accounts in western Wisconsin.

That would mean every customer would pay $216 a year even before turning on the lights.

For the average household – using about 750 kwh a month – that would mean about $5 more each month, or an overall increase of 4.6 percent. Those using more energy would see smaller increases. But a customer using just 200 kwh would pay an extra $8.60 – a 26 percent hike.

The PSC, scheduled to hold a public hearing Thursday on Xcel’s rate case, last year granted similar increases to three other investor-owned utilities, including the Wisconsin Public Service Corp., which is asking to further boost its customer charge next year.

Utilities argue it’s a matter of fairness: customers who only use a little electricity should still have to pay to have it when they need it.

“These are generally about trying to make sure rates are aligned with the true cost of providing service to customers. … without having one class of customers subsidize another,” said Bill Skewes, executive director of the Wisconsin Utilities Association, which represents the state’s investor-owned utilities.

But opponents say it’s anything but fair to customers who use the least electricity and can least afford it.

“People should be able to manage their bills and save money by using less, not by wasting more,” said Russell Wallace, president of the Citizens Utility Board, a nonprofit organization that advocates for “reliable and affordable” utility service on behalf of Wisconsin consumers.

The change has even attracted the attention of the AARP, which represents 825,000 members and more than 2 million Wisconsin residents over age 50.

“This mandatory charge has a disproportionate effect on many seniors and others who are struggling to have more control over their monthly utility bills,” said state director Sam Wilson.

Other groups argue it negates efforts consumers have made to conserve – whether by limiting their use or purchasing energy efficient appliances.

“The rate structure really thwarts innovation and conservation,” Klein said. “It sets the state back in terms of attracting new innovations.”

The strategy is a response to stagnant electricity sales and what the Edison Electric Institute called “disruptive forces” – such as energy efficiency and technology making it increasingly easy for consumers to generate their own electricity.

“The threat to the centralized utility service model is likely to come from new technologies or customer behavioral changes that reduce load,” the industry group wrote in a 2013 policy paper that advocated the rate shift.

While they are becoming more affordable and popular, rooftop solar panels are hardly the norm. Xcel has just 175 so-called “distributed generation” Wisconsin customers – less than 0.08 percent – putting power into the grid.

Over the past decade, total electricity sales grew by only about 1 percent, according to data from the U.S. Energy Information Administration. Sales in Wisconsin actually declined.

Regardless of sales, utilities have to maintain the lines, poles and meters required to deliver power.

“We’re required by law to have reliable power available to anyone who wants to use it,” said Don Reck, Xcel’s regional vice president of rates and regulatory affairs. “All that costs the same whether you use it once a day … or once a year.”

Opponents counter that many industries have infrastructure.

“In a competitive market a company can never get away with this,” Hubner said. “The oil and gas industries have huge fixed costs … and yet they sell their product one gallon at a time. Low use customers aren’t charged just for showing up at the gas station.”

In the past two years, at least 35 investor-owned utilities in 18 states have proposed flat fee increases ranging from 10 cents to $16.

Three states rejected increases across the board, while 15 states authorized rate increases of $2.15 on average. Wisconsin approved three increases, with the average amount at more than $8.

Other states that approved fixed rate increases gave utilities about 35 percent, on average, of what they requested. Wisconsin regulators agreed to more than 77 percent.

“There’s something going on in Wisconsin that’s very different than anywhere in the country,” Klein said. “Other customers are not being asked to pay these extremely high fixed charges.”

In Minnesota, Xcel requested only a $1.25 increase to the $8 fee - state regulators turned them down - which has led to cries of price gouging by their critics, who point out that power flows freely between the states.

But Reck also said the company takes its cues from regulators, who have signaled support for a different rate structure.

Citing the pending case, PSC chairwoman Ellen Nowak declined to be interviewed, but she has embraced the industry’s arguments in public speeches and in the commission’s written decisions on other cases, suggesting those who use less energy – whether by limiting consumption or generating their own – aren’t paying their fair share for the infrastructure.

She argues that as long as they are connected to the grid, these customers represent potential demand. Therefore they should have to pay for the privilege of having power when they need it.

“(L)ow use is not the same as low demand, and therefore low-use customers do not necessarily contribute to a lower cost utility system,” Nowak wrote in one decision. “(I)t is unfair to allow continued subsidization of low use customers through a rate structure consisting of misleadingly low fixed charges and high variable charges.”

Klein suggests the PSC’s mission has been flipped.

“Something has gone off track,” Klein said. “This regulation is being applied to protect utilities from their customers.”

Those customers have taken notice.

As of Friday, the PSC had received more than 350 comments on the rate request. Xcel’s last regular rate hike request generated six.

Some comments focus on the impact the rates would have on renewable energy development; others simply protest the idea of little guys paying more.

“This is a blatant attempt by Xcel energy to line their pockets at the expense of the middle/lower class,” writes one Onalaska resident. “We don't use a lot of electricity, and there's a reason for it. We simply cannot afford it.”

Clean energy advocates say there are other more effective ways for utilities to recoup costs.

Some advocate time of use billing, where prices vary depending on demand. That means consumers would pay more on summer afternoons, when air conditioners are running overtime and wholesale prices spike.

On the flip side, they could save more by turning up the thermostat during peak times and running the dryer at night. Those with solar panels on their roofs would be rewarded for adding power to the grid when it's most needed.

Another option is the minimum monthly bill, where the base charge is essentially a credit toward electricity used.

Xcel uses time of use pricing for some customer classes, but Reck said it doesn’t address the infrastructure costs. Reck said that is feasible but creates more administrative challenges.

Klein said utilities – with the help of the PSC – are trying to lock in a change that will protect their revenue stream by discouraging change. In the process they are creating divisions that will prevent better solutions.

“There’s no emergency in Wisconsin requiring this overhaul,” Klein said. “We’re not seeing the need for it. There is a lot of time for utilities and their customers and regulators to sit down and come up with innovative solutions.”

“There’s something going on in Wisconsin that’s very different than anywhere in the country. Other customers are not being asked to pay these extremely high fixed charges.”

- Brad Klein, senior attorney for the Environmental Law and Policy Center in Chicago

Who is the PSC?

Three commissioners, appointed by the governor to six-year terms, regulate the prices utilities can charge and approve construction projects within the state.

An attorney, Nowak served as chief of staff for Waukesha County Executive Dan Vrakas and to former Assembly Speaker John Gard, a Republican. Nowak was first appointed to complete the term of Commissioner Lauren Azar when she left to join the U.S. Department of Energy. She has a law degree from Marquette University and a bachelor’s degree from the University of Wisconsin-Milwaukee.

Former Republican lawmaker from Green Bay, appointed to replace Commissioner Mark Meyer (a former state Senator from La Crosse). Former chair of the Assembly energy and utilities committee. He has a bachelor’s degree from the University of Houston and is a former systems engineer.

The former West Salem legislator was appointed this year to replace Eric Callisto, the last commissioner not appointed by Gov. Scott Walker and the only dissenting voice in last year’s fixed rate decisions. Huebsch, a Republican, served 16 years in the state Assembly, including one term as Speaker. He left the Assembly in 2011 to serve as Walker's top cabinet official in the Department of Administration.

Comment: Public comments may be submitted online through Oct. 28.

Wisconsin regulators approved a $6 increase to the basic monthly charge applied to residential customers in Wisconsin. Xcel will reduce the price of electricity by an average of 0.7 cents per kilowatt hour. That translates to a bigger increase for customers who use less energy.

Wisconsin regulators approved a $6 increase to the basic monthly charge applied to residential customers in Wisconsin. Xcel will reduce the pr… 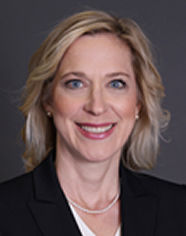 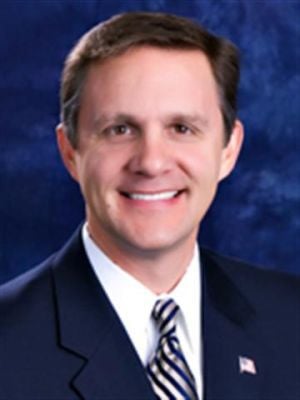 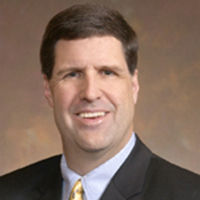