Become a Member
Read Today's E-edition
Share This
Happy midterms! Here's a rundown of the best political zingers in history
0 Comments
Share this 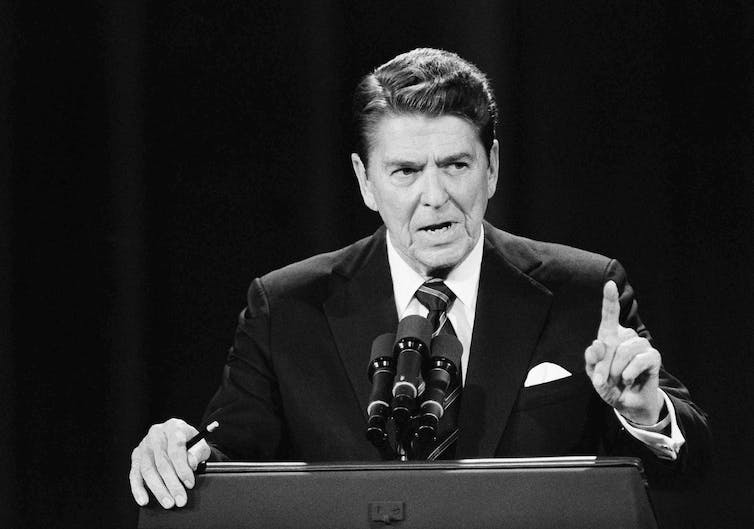 Labor Day marked the beginning of the decisive, final stretch of the U.S. political campaign season, when candidates prepare to debate one another by practicing their ad-libs or “zingers,” as they’re called, hoping to have the last word with voters.

I dedicated my book, “I’ll Be Sober in the Morning: Great Political Comebacks, Putdowns, and Ripostes,” to Dan Quayle, the former vice president who was left red-faced and stuttering by Democrat Lloyd Bentsen during a vice presidential debate in 1988.

In a political debate, the ability to deliver a response that leaves an opponent speechless can be a potent weapon. To win a battle of wits requires qualities that are rare – or at least medium rare – in politics – a good ear, good timing, a nimble brain and a sardonic wit.

“All the best off-the-cuff remarks are prepared days beforehand,” he said.

The ability to deliver a sharp wisecrack can be a potent political weapon. A verbal comeback can be both a bludgeon to injure an opponent or a shield to deflect a opponent’s unwanted advances.

But perhaps most importantly, it can establish one’s superiority over his or her rival. In the dog-eat-dog world of politics, nobody wants to end up as the bone.

What makes a good comeback?

Churchill, whose trenchant wit is prominently featured in my book, inspired the book’s title. As the story goes, Churchill was drinking heavily at a party in 1946 when he bumped into Bessie Braddock, a political rival.

“Winston, you are drunk, and what’s more you are disgustingly drunk,” Braddock scolded him.

Churchill’s wit could cut deeply. This approach works better in England than in the United States, where a sarcastic quip may regale party loyalists but runs the risk of turning away undecided voters. Republican U.S. Sen. Bob Dole twice ran for president and lost each time in part, observers said, because his sense of humor was widely viewed as mean-spirited.

By contrast, Abraham Lincoln’s humor was often self-deprecating, which elicited sympathy from the audience rather than scorn. During one of Lincoln’s debates with Stephen Douglas in 1858, Douglas called Lincoln “two-faced.” Lincoln responded by saying, “I leave it to my audience. If I had another face, would I wear this one?”

During one of the Democratic Party presidential debates in Iowa in 2007, a journalist asked then-Sen. Barack Obama how he could promise a significantly different foreign policy from former President Bill Clinton, given that several of his advisers once worked for the Clinton administration. 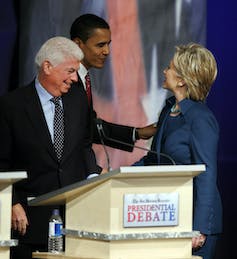 Hillary Clinton and Barack Obama at a Democratic presidential debate in Iowa in 2007. AP Photo/Charlie Neibergall

Before Obama could answer, Sen. Hillary Clinton, the former first lady and the frontrunner to win the Democratic Party’s nomination, interrupted him.

“I want to hear that,” Clinton said, provoking laughter.

Obama paused momentarily and replied, “Well, Hillary, I’m looking forward to you advising me, as well.”

The audience laughed, and so did the other Democratic candidates on stage – except for Clinton, whose self-satisfied smile turned to a grimace.

Clinton scored political points of her own during a presidential debate in 2016. When Republican candidate Donald Trump said that Russian President Vladimir Putin had “no respect” for Clinton, she responded: “That’s because he’d rather have a puppet as president.”

Trump then countered with “No, puppet, no puppet, you’re the puppet.”

When Trump feels wronged, he goes on Twitter and responds with the finesse of a knee to the groin. His comebacks are more like something you would hear on an elementary school playground than something you could read in my book.

When Ronald Reagan ran for a second term as president in 1984, he was in his 70s and critics wondered if he still had the vitality for the office. This criticism intensified when Reagan struggled during his first debate with Democratic challenger Walter Mondale.

At the beginning of the next debate, a reporter raised the question of his age to Reagan, who was prepared with a response.

“I want you to know that I will not make age an issue in this campaign,” Reagan said. “I am not going to exploit for political purposes my opponent’s youth and inexperience.”

In 1988, George Herbert Walker Bush selected little-known Sen. Dan Quayle as his running mate. The youthful Quayle deflected concerns about his age and inexperience by comparing his experience to John F. Kennedy, who also had relatively little political experience before seeking the presidency in 1960.

Quayle’s handlers told him not to bring up the comparison during his televised debate with the Democratic vice presidential candidate, Lloyd Bentsen. Quayle ignored the advice.

When the issue was raised during the debate, Quayle answered, “I have as much experience … as Jack Kennedy did when he sought the presidency.”

This article was originally published on The Conversation. Read the original article.