Become a Member
Read Today's E-edition
Share This
'A wakeup call': Heat bills to soar amid global energy crunch
0 Comments
Share this
1 of 3 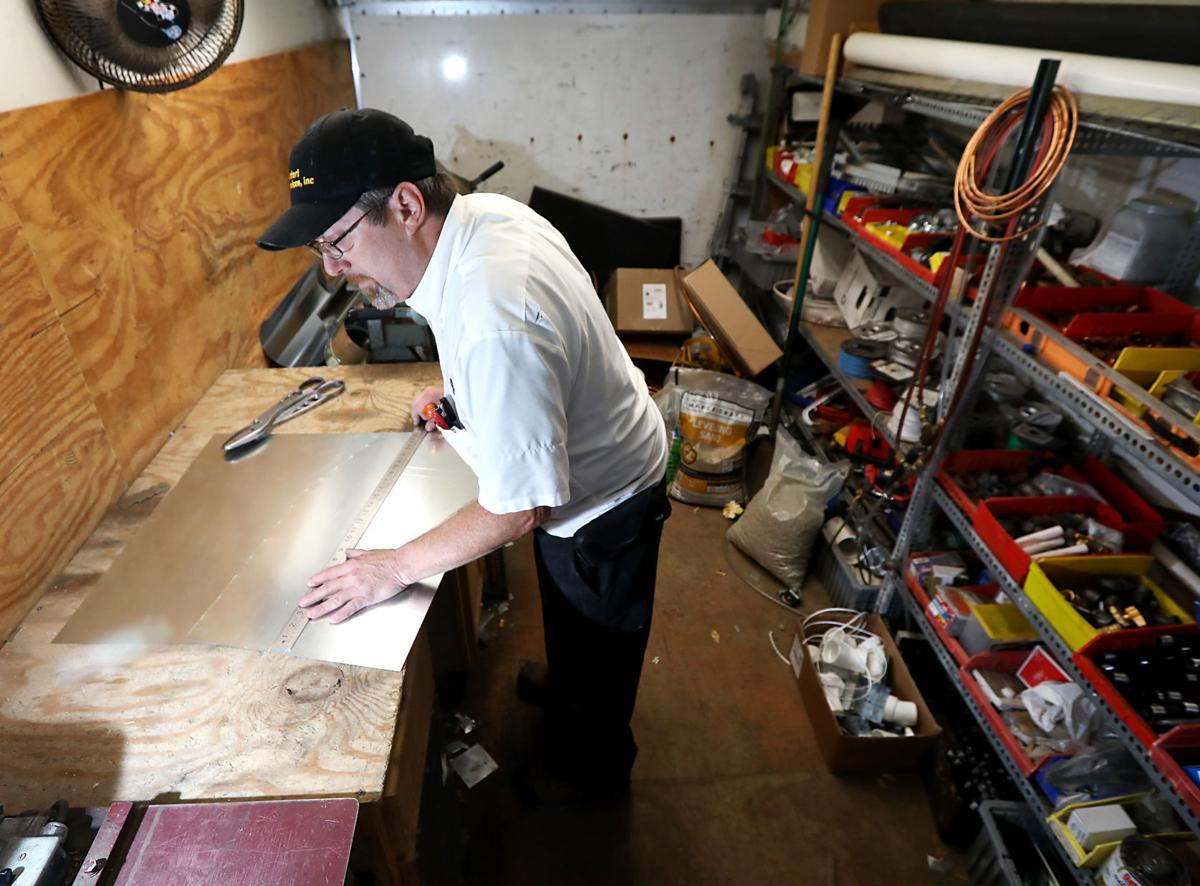 Brandon Reed cuts sheet metal for a furnace installation. HVAC installers are encouraging people to check out their furnaces soon because supply-chain constraints could make replacements and parts harder to get this year. 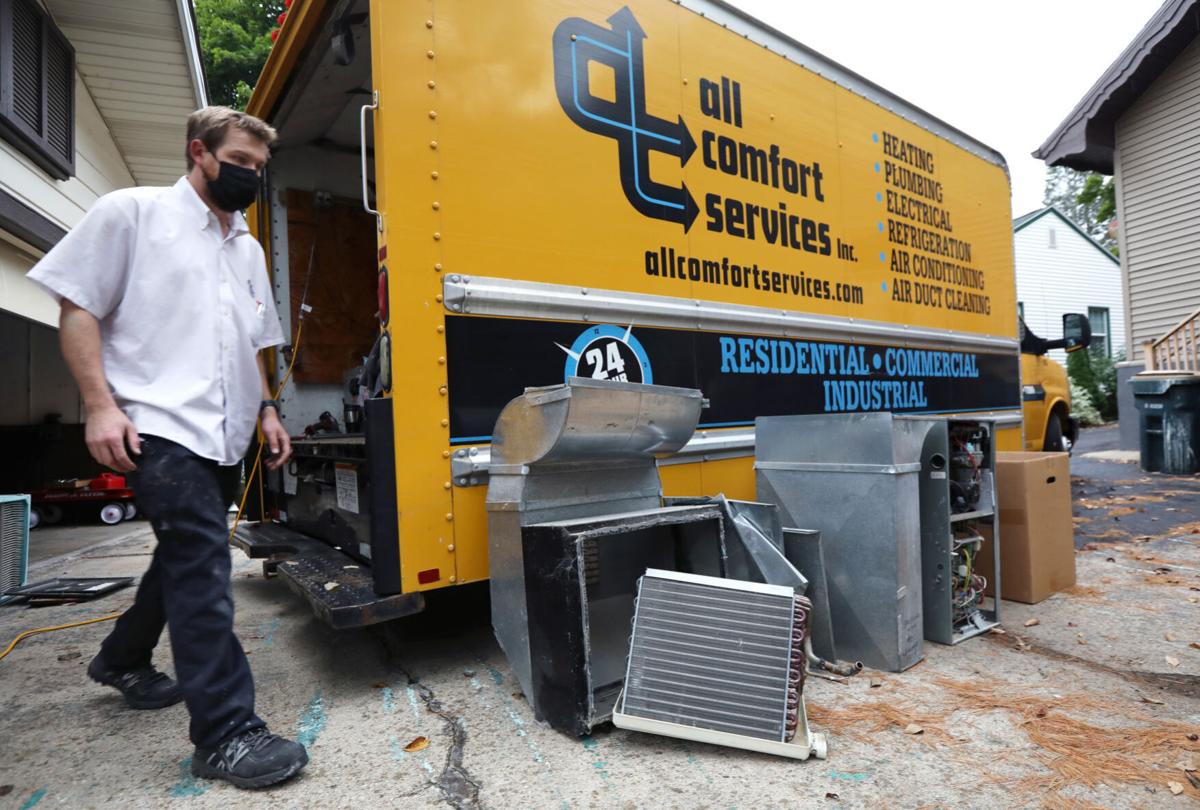 Technician Jesse Scott at a furnace replacement job on Madison's East Side. Switching from an old furnace to a high-efficiency model can save 30% to 40% on heating costs, according to HVAC installers. 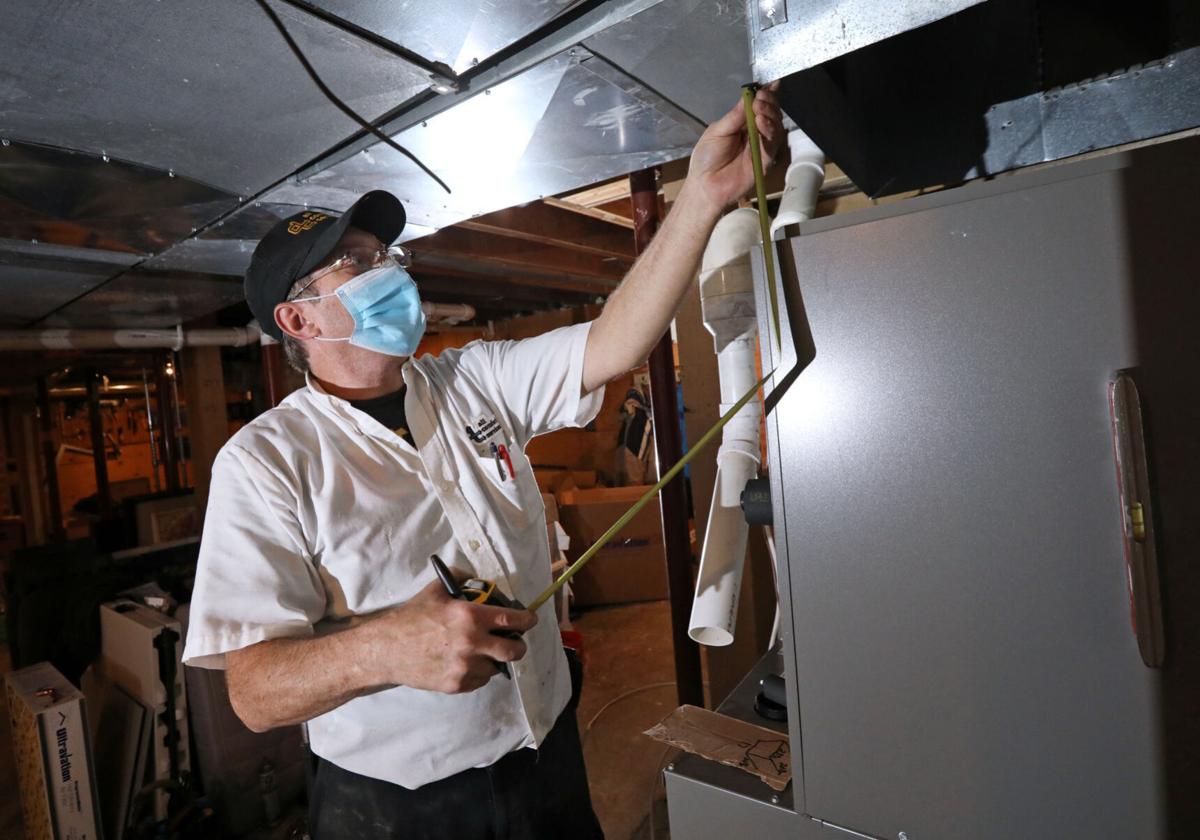 Brandon Reed, with All Comfort Services, installs a two-stage Lennox high-efficiency gas furnace at a customer's home on Madison's East Side. Wisconsin residents will likely spend hundreds more dollars this year to heat their homes because of high fuel prices.

Wisconsin residents could be paying hundreds of dollars more to heat their homes this winter because of a global energy crunch that has sent natural gas prices to the highest level in a decade.

The federal Energy Information Administration last week forecast steeply higher heating bills for all U.S. households, regardless of the weather. The Midwest is expected to be hardest hit, with some households spending up to 69% more.

We Energies, the state’s largest utility, says the average household could be paying an extra $25 a month for gas this winter. Sister company Wisconsin Public Service Corporation, which is served by a different pipeline, warned of a $40 monthly hike for customers in the colder northeast region.

Xcel Energy says its customers in northwest Wisconsin could be paying $45 to $65 more per month between November and March, which includes additional costs resulting from winter storm Uri.

Madison Gas and Electric says its customers will likely see additional costs of $25 to $30 a month.

Alliant Energy has not calculated the bill impacts, though both utilities recommend cost-saving measures such as turning down the thermostat, changing furnace filters and sealing window and door openings.

Tom Content, executive director of the Citizens Utility Board, says the price surge comes on top of bill increases tied to winter storm Uri, which froze wellheads and pipelines across Texas and Oklahoma last February and caused prices to jump nearly 10,000%.

Unlike the equipment monopoly utilities use to deliver energy, fuel is an unregulated pass-through charge. Utilities don’t earn a profit on the gas they sell or burn to generate electricity, but when the price goes up, those costs are passed on to customers.

For now, the added costs will affect gas bills, but customers could also see an impact on their electricity bills starting early next year as regulators adjust rates to account for higher fuel costs. Since 2019, about a third of Wisconsin’s electricity has been generated with natural gas.

Prices on the rise

The Energy Information Administration expects it will cost about 30% more this year to heat with natural gas, the most common heating fuel in Wisconsin. Costs for heating oil are expected to be about 43% more than last winter, while propane customers in the Midwest will spend an extra 69%.

What’s more, the National Oceanic and Atmospheric Administration predicts this winter will be slightly colder than average, which could increase costs even more.

The Public Service Commission is recommending propane and heating oil customers fill up their tanks soon as prices are expected to rise throughout the winter.

The reason for the price hikes is a worldwide increase in demand coupled with supply constraints that has pushed the price of gas for delivery in September to over $5 per million BTU for the first time since January 2010, according to Energy Information Administration data. Prices have nearly doubled since the start of the year.

Emily McClain, a senior gas analyst with Rystad Energy, said multiple factors have created a “perfect storm” scenario: colder temperatures coupled with a global economic recovery fueled strong demand, but shale producers have been slow to ramp up production, and pipeline and storage constraints will limit their ability to meet demands.

McClain said prices should moderate, though Rystad expects prices to remain in the $3 to $4 range through 2023.

CUB encourages residents who are struggling financially to apply for energy assistance grants and those who can afford it to consider replacing old furnaces or adding insulation to their homes with the help of Focus on Energy incentives.

“We’ve been fortunate that natural gas prices were as low as they’ve been for the last few years,” Content said. “This is kind of a wakeup call.”

Kendall Richards, president of All Comfort Services, says he’s heard “some rumbling” from customers looking to get ahead of the price increases, but most customers don’t think about their furnace until it breaks down.

But with his suppliers sitting on smaller inventories and facing difficulties getting computer chips and other parts, Richards warns this is not a good year to wait.

“It may be better to do it on your timetable,” Richards says.

Richards says a furnace tuneup may only improve performance by a couple of percent, “but it does add up.”

He adds that many Madison homes still have chimney-venting furnaces, which waste much of the heat generated and pull cold air into the home; upgrading to a high-efficiency model can result in savings of 30% to 40%.

Financial help is available from the state’s Home Energy Assistance Program (WHEAP) for households earning less than 60% of the state median, which works out to about $50,000 for a family of three. Help is also available from the nonprofit Keep Wisconsin Warm/Cool Fund.

The state estimates some 205,000 households will receive an average of $388 to offset heating costs this winter and about $195 for electricity.

“We try to estimate the need so we can serve everybody,” said Barb Klug, director of the state’s Home Energy Plus bureau. “Let’s hope for a warm winter.”

Photos: From tree to yard to table, the journey of local black walnuts

A 29-year-old man and a 21-year-old woman died when their plane crashed into a home in northern Wisconsin, authorities say.

A 12-year-old girl died after crashing a UTV she was driving at a residence in the town of Leeds in Columbia County on Sunday night, Sheriff Roger Brandner reported.

Brandon Reed cuts sheet metal for a furnace installation. HVAC installers are encouraging people to check out their furnaces soon because supply-chain constraints could make replacements and parts harder to get this year.

Technician Jesse Scott at a furnace replacement job on Madison's East Side. Switching from an old furnace to a high-efficiency model can save 30% to 40% on heating costs, according to HVAC installers.

Brandon Reed, with All Comfort Services, installs a two-stage Lennox high-efficiency gas furnace at a customer's home on Madison's East Side. Wisconsin residents will likely spend hundreds more dollars this year to heat their homes because of high fuel prices.