Denied, again: Packers fall to Buccaneers as Aaron Rodgers’ path back to Super Bowl blocked once more
1 comment
Share this
{{featured_button_text}}
1 of 2 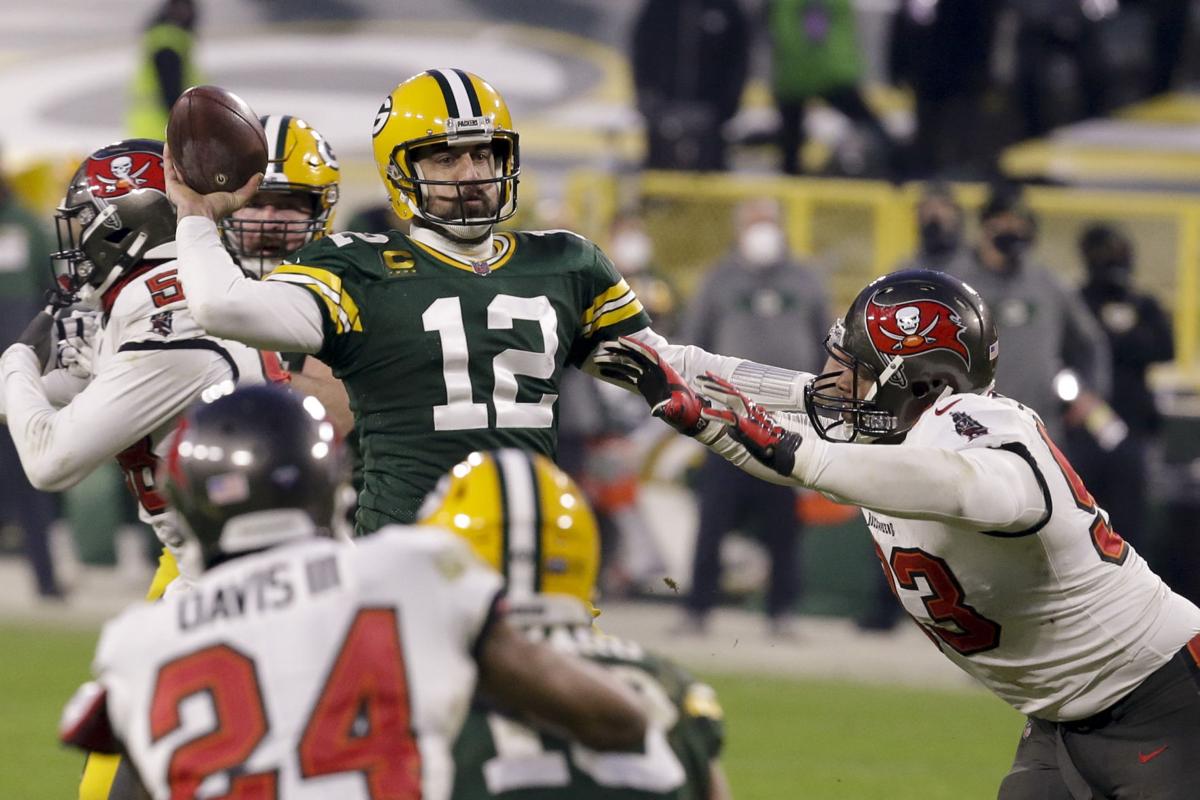 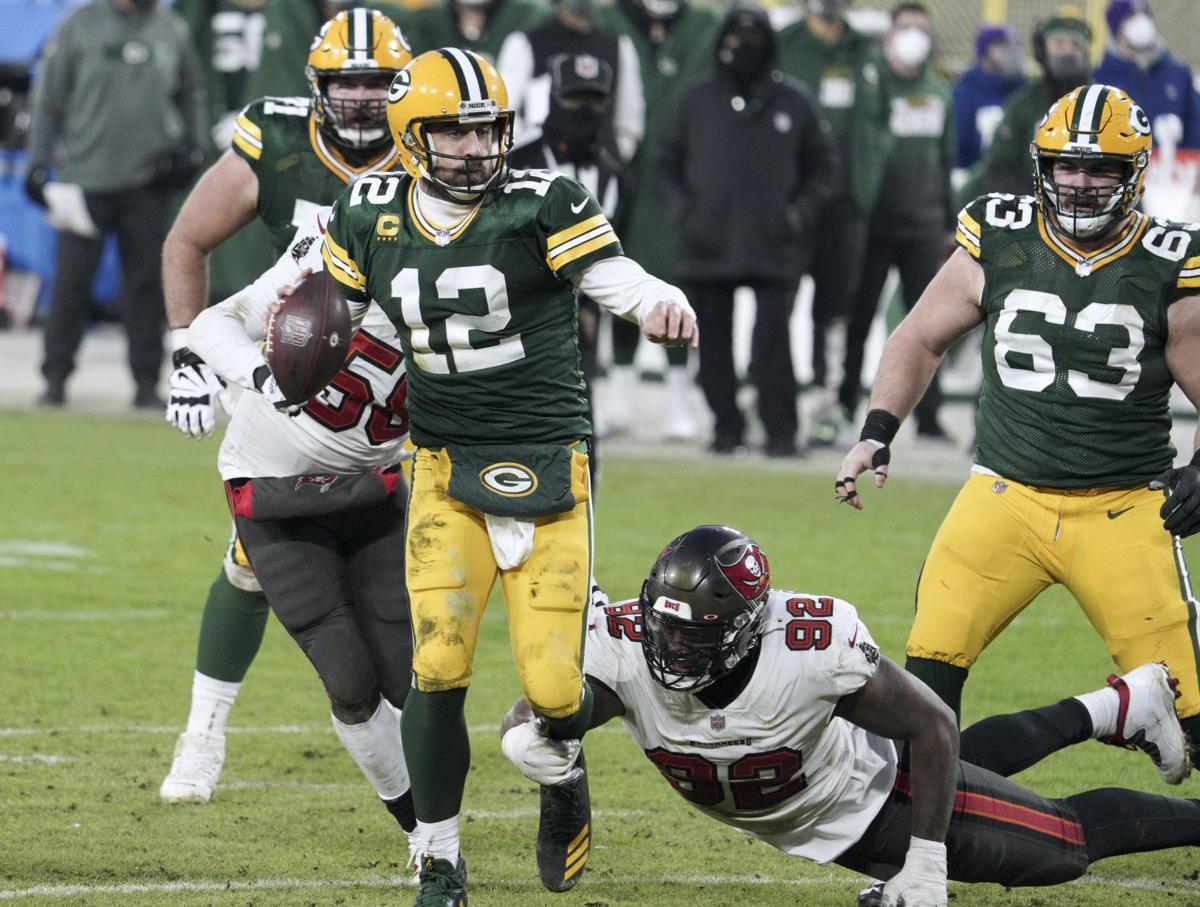 GREEN BAY — Aaron Rodgers let the question hang in the air of cyberspace for a few seconds as he considered his answer.

How do you go on from here?

The Green Bay Packers’ gut-wrenching 31-26 loss to the Tampa Bay Buccaneers at Lambeau Field had been over for less than an hour Sunday evening, and the quarterback was searching for words in face of another NFC Championship Game disappointment. The loss had been his fourth in five NFC title game appearances, a defeat that prevented him from returning to the Super Bowl a decade removed from leading the 2010 Packers to the Super Bowl XLV title.

“It’s a good question. I don’t know, I really don’t,” Rodgers finally — dejectedly — replied. “There’s a lot of unknowns going into this offseason now. I’m going to have to take some time away, for sure, and clear my head and just kind of see what’s going on with everything. But it’s pretty tough right now, especially thinking about the guys that may or may not be here next year.

“I … will always be thankful for this season.”

With that, the soon-to-be three-time NFL MVP got up from his seat and moved out of the Zoom camera’s view. Under contract for three more seasons, Rodgers acknowledged that his future is among those that are uncertain. And while Buccaneers quarterback Tom Brady is headed to his 10th Super Bowl appearance in his first year in Tampa after winning six titles with the New England Patriots, the 37-year-old Rodgers was left contemplating if he’d ever get back to his second — and if he’d do it with the Packers, who have their quarterback of the future, Jordan Love, on the roster.

“(There are) lot of guys’ futures that are uncertain — myself included. That’s what’s most sad about it, getting this far,” Rodgers said. “Obviously, it’s going to be an end to at some point, whether we make it past this one or not. But just the uncertainty’s tough and finality of it all.”

Asked following Rodgers’ comments whether he expects to be coaching Rodgers in 2021, head coach Matt LaFleur replied, “I sure as hell hope so. I mean, the guy’s the MVP of this league. He’s the heart and soul of our football team. So, hell yeah, he better be back here. He’s our leader. (I’m) just so appreciative of him buying into what we’re trying to get done around here and leading that group. His voice carries a lot of weight in that locker room. I feel for him, to be in this situation and for us not get it done. Man, that hurts.”

Despite playing at home in an NFC title game for the first time with Rodgers as their starter, the Packers (14-4) never led in the game. And after giving up what LaFleur called an “inexcusable” 39-yard Brady-to-Scotty Miller touchdown pass when Miller got behind Packers cornerback Kevin King and scored with 1 second left until halftime, the Packers were in a 21-10 hole.

Matters got even worse to start the second half, when Packers running back Aaron Jones fumbled on the third play of the third quarter, deep in Green Bay territory. On the very next play, Brady hit tight end Cameron Brate for an 8-yard touchdown and a 28-10 lead.

“The ones that really hurt us the most were that (touchdown) play, and then to come out to start the second half, have the fumble and they score to make it 28-10. That really was the big difference in the football game,” LaFleur said. “You just can’t do that stuff.”

Contributing to that 18-point hole was the Packers’ ineptitude in the red zone — an area they renamed (the “gold” zone) and dominated in this season, scoring touchdowns on 48 of their 60 regular-season trips inside their opponents’ 20-yard lines. On this night, they managed only two touchdowns in their four trips, settling for field goals on two other visits — including their final one, which ended in LaFleur’s controversial decision to kick with 2 minutes, 5 seconds to play.

The Packers had pulled within 28-23 as Rodgers led third-quarter touchdown drives that ended in scoring strikes to Robert Tonyan and Davante Adams. But even with Brady throwing interceptions on three successive possessions (one to safety Adrian Amos, two in a row to cornerback Jaire Alexander), the Packers couldn’t turn either of Alexander’s picks into points in order to take the lead. Both times, the offense went three-and-out.

“We had some chances, obviously,” said Rodgers, who finished the game having completed 33 of 48 passes for 346 yards with three touchdowns and one interception (101.6 passer rating) while absorbing five sacks and being pressured 22 times — the most in a playoff game in his career. “We had the ball there, all the momentum and just kind of needed one first down to get going. And we just didn't get it, which was disappointing.”

After the second three-and-out, the Buccaneers (14-5) pushed the lead to 31-23 on a Ryan Succop field goal with 4:42 to play. Rodgers then quickly got the Packers back into scoring position, with back-to-back connections with Adams setting up first-and-goal from the Tampa Bay 8 with 2:22 to go. But after three straight incomplete passes (one to Allen Lazard, two to Adams), it was fourth-and-goal and LaFleur sent on the field-goal unit.

“Matty allowed me to call that third-down play. If I had known we were going to kick it, maybe (I) would have maybe gone with some sort of crossing routes there instead,” Rodgers said. “But I thought we maybe were going to have four chances.”

Instead, Mason Crosby kicked a 26-yard field goal to make it 31-26 — with Equanimeous St. Brown’s drop on the two-point conversion after Adams’ touchdown looming large, as the field goal would have then cut the lead to just three. Instead, LaFleur was left to explain afterward that he believed, with the 2-minute warning and all three of his timeouts, the defense could get Rodgers the ball back instead of counting on Rodgers to get a fourth-down touchdown and the ensuing two-point conversion to tie the game.

It nearly worked, too. But facing a third-and-4 from his own 37-yard line, Brady threw across the middle to rookie wide receiver Tyler Johnson, and King was flagged for pass interference — a penalty Rodgers called a “bad call,” although King did grab Johnson’s jersey just before the ball arrived. The Buccaneers ran out the clock from there.

“I couldn't believe it,” Buccaneers edge rusher Shaquil Barrett said of LaFleur’s decision to kick the field goal. “I know if they could take that back, they probably wouldn't do that next time.”

And as a result, the Buccaneers advanced to play in Super Bowl LV in their own building at Raymond James Stadium on Feb. 7, and the Packers headed into an offseason of uncertainty — including for their star quarterback.

A buzz surrounded and filled Lambeau Field, but the Packers fall to the Tampa Bay Buccaneers in Sunday’s NFC championship game.

Green Bay's second-year coach took the ball out of the hands of Aaron Rodgers, the NFL's presumptive MVP, and put his trust in a defense that hadn't consistently delivered all season.

“I blame us as coaches for putting our guys in that situation," Matt LaFleur said. "That’s inexcusable. ... We’ve got to take a look at it, do some self-reflection, and try to figure out ways on how that can’t happen again.”

The Buccaneers sacked Aaron Rodgers five times, hit him eight times and pressured him 22 times during their 31-26 victory over the Packers in the NFC Championship Game on Sunday at Lambeau Field.

Mike Pettine, whose contract with the Packers was set to expire after the season, becomes the second coordinator to depart this week, two days after Matt LaFleur fired special-teams coordinator Shawn Mennenga.

Green Bay Packers fans inside Lambeau Field are amped up for Sunday’s NFC Championship Game against the Tampa Bay Buccaneers.

Get the latest postgame updates after Aaron Rodgers and the Packers fell to Tom Brady and the Buccaneers 31-26 in the NFC Championship Game at Lambeau Field.

Party preparations different due to pandemic, but Packers fans gear up for NFC title game

The menu will be a little different at Brian Kopp’s house Sunday.

Watch now: Fans at Lambeau are pumped for Packers-Buccaneers

Watch now: Packers fans and 2 Buccaneers’ fans gear up for the big game