The U.S. Department of Education on Friday warned Wisconsin that Republicans’ proposed $350 million for the state’s rainy day fund won’t help qualify it for $1.5 billion in federal stimulus funds for education the GOP budget already puts the state at risk of losing out on.

Republican members of the Legislature’s budget committee on Thursday voted to advance a K-12 education plan that would fund just 10%, or $128 million, of the $1.6 billion sought by Democratic Gov. Tony Evers. They also voted to put $350 million into the state’s budget stabilization fund to “maintain education funding stability in the future,” although that fund can be tapped for any purpose so there’s no guarantee those dollars would end up going to schools.

The GOP co-chairs of the budget committee said the warning so far changes nothing in their budget proposal.

The $128 million increase alone likely isn’t enough for the state to qualify for all of the $1.5 billion in education funding included in the latest federal coronavirus relief package.

In order to receive the more than $1.5 billion in education funding included in the latest federal package, the state needs to spend at least the average K-12 allocation made from fiscal years 2016-17 through 2017-18, the Fiscal Bureau said. The bureau notes that the state needs to increase education spending by $387 million over the two-year period in order to reach the threshold needed to get the federal funds. 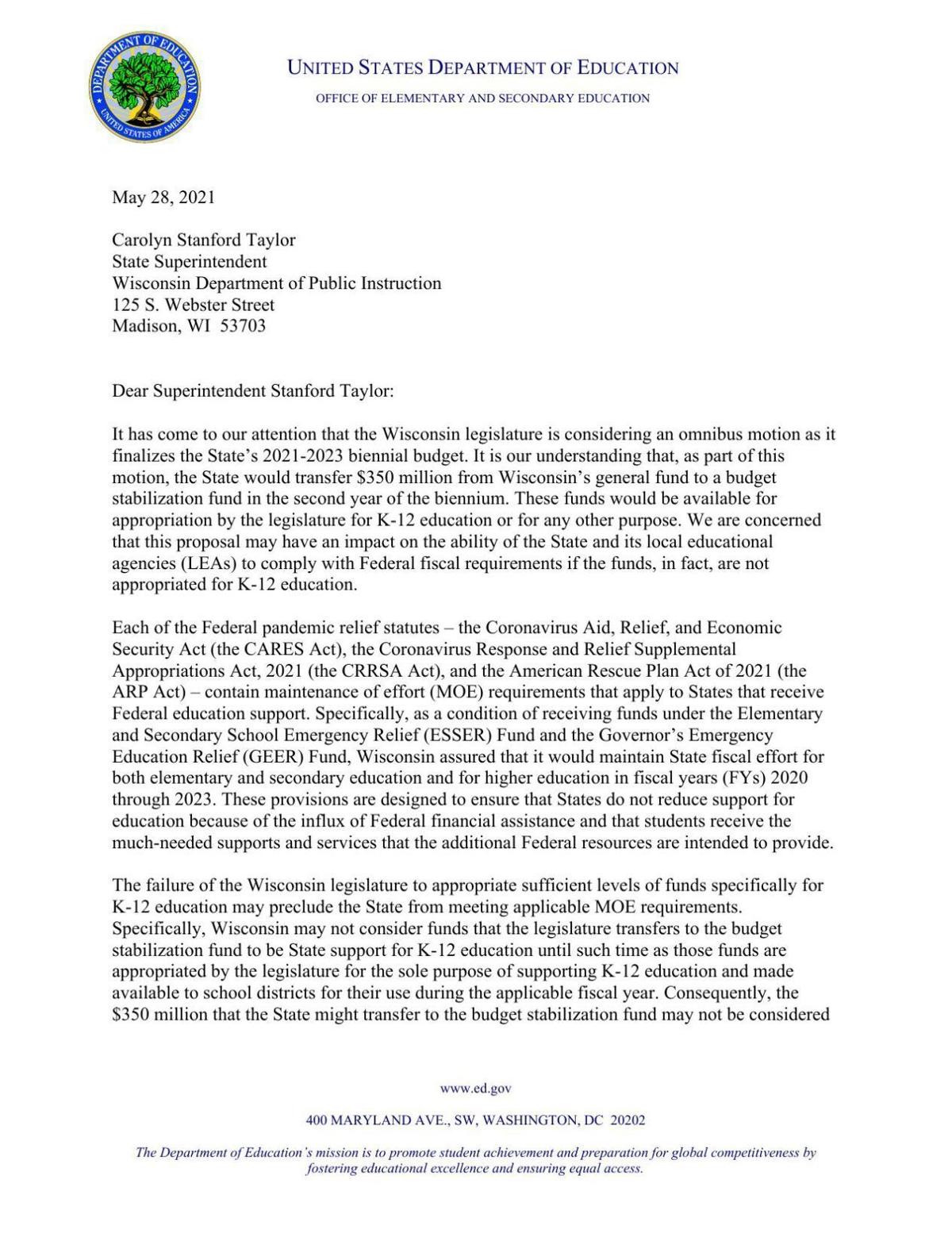 Now, the U.S. Department of Education, in a letter to the state Department of Public Instruction and Gov. Tony Evers on Friday, said the $350 million allocated to the state’s budget stabilization, or “rainy day” fund, likely won’t count toward the minimum threshold unless the money is spent on K-12 education.

“Specifically, Wisconsin may not consider funds that the legislature transfers to the budget stabilization fund to be State support for K-12 education until such time as those funds are appropriated by the legislature for the sole purpose of supporting K-12 education and made available to school districts for their use during the applicable fiscal year,” wrote Ian Rosenblum, deputy secretary for policy and programs in the Office of Elementary and Secondary Education.

“Consequently, the $350 million that the State might transfer to the budget stabilization fund may not be considered State support for education at the time of the transfer unless it is actually appropriated for K-12 education for the applicable fiscal year and not ‘for any other purpose.’”

Further, Rosenblum said the state is subject to minimum thresholds of state support in order to qualify for funding from other federal education programs, including Title I, Part A of the Elementary and Secondary Education Act of 1965 that provides financial assistance to educational agencies and schools with high percentages of children with low-income families.

“The Department will continue to closely review and monitor whether Wisconsin is meeting all Federal fiscal requirements,” Rosenblum said.

Republicans said the K-12 spending plan, which passed 11-4 along party lines, is an effort to account for billions in federal stimulus funds provided to the state during the pandemic. However, the GOP budget may fall short of what the state needs to spend in order to get all those dollars.

“My position remains the same as it was yesterday,” Marklein said in a statement. “We will continue to consider the potential impact of the (minimum state funding thresholds) for the future, but we will not paralyze our state budget process.”

In another statement, Born called the amount of federal funding schools are slated to receive (if requirements are met) “obscene,” and questioned whether it was legal for Evers to have accepted such federal funds given that the federal government has imposed additional requirements on the Republican Legislature during the budget process.

“Ultimately, this is a political letter sent by a Biden bureaucrat at the request of a hyper partisan liberal-democrat from Dane County who cut state aid for K-12 education when he was Co-Chair of the Joint Committee on Finance,” Born said, referring to U.S. Rep. Mark Pocan, D-Black Earth, who asked the Department of Education about the funding thresholds.

In a statement, Pocan blasted Republicans.

“The GOP majority in the state legislature is playing budgetary games that will cost Wisconsin taxpayers at least $1.5 billion in federal aid for state schools,” he said.

Wisconsin schools are set to receive roughly $2.6 billion in federal aid through several coronavirus stimulus packages passed by Congress over the course of the pandemic if the state meets minimum requirements.

Born said on Thursday he recently became aware of the federal requirement, despite the fiscal bureau first mentioning it in an April 8 memo.

Republicans on the committee said the details of meeting minimum state funding thresholds would be fleshed out during the budget process.

On Thursday, Marklein said it’s possible federal guidelines for the money could change and the risk is “manageable.”

SOS readers seek help with flights canceled due to COVID-19

With the advent of the COVID-19 pandemic, SOS saw complaints about flight refunds and vouchers soar.

Paschke said "Josh" said to keep his number and he "will personally make sure I get the cash back after December."

Loyal readers might remember John Schmitz from April, when during the early days of the COVID-19 pandemic, SOS was able to help him break through the logjam at the Department of Workforce Development to resolve his unemployment claim.

"If I hadn't gone to the post office and did my own investigating, we wouldn't have received our ballots."

"Why wouldn't I use those 50,000 miles for free flights if I had them in my account in early June?"

Airlines have been taking advantage of federal rules that allow them to deny refunds of nonrefundable tickets to travelers who cancel their trips.

SOS: Mitigating at least a little of the damage wrought by COVID-19 pandemic

"They don't seem to understand that if I couldn't get to Tampa, how was I supposed to use the ticket and fly back?"

"The GOP majority in the state Legislature is playing budgetary games that will cost Wisconsin taxpayers at least $1.5 billion in federal aid for state schools."

A second round of identical funding will be released next year, bringing the total to more than $411 million in allocations to Wisconsin communities with fewer than 50,000 residents.

"On the back end we had retiring drivers and on the front end we had a bottleneck created by the pandemic for new drivers coming into the workforce," Kedzie said.

Officials plan to break ground early next year on the hub, which is slated to be built at the Village on Park mall property, with hopes of finishing the project by the end of 2022. WEDC plans to relocate to the facility in 2023.

Under new guidance, unvaccinated poll workers will be able to work in upcoming elections if they submit a negative coronavirus test within three days of an election.

The state Supreme Court also ruled that the partisan makeup of districts is not a valid factor to consider when drawing new legislative and congressional districts.

Rep. John Macco not running for Wisconsin governor next year

Salzwedel will take the seat on the board previously held by Rebecca Cooke, who in October entered the race for Wisconsin’s 3rd Congressional District.

Speaking with reporters Thursday, Vos said Johnson met with Republican lawmakers on Wednesday to discuss topics like the economy and inflation, but "never got into elections."

The social media manager for the Democratic Party of DuPage County, Illinois, lost her post after tweets comparing Kyle Rittenhouse to the driver of the SUV that sped through a Wisconsin Christmas parade.