The former state Supreme Court justice heading the GOP probe into Wisconsin’s 2020 election is seeking to have the Waukesha County sheriff bring in for questioning — potentially even jail — the mayors of Madison and Green Bay if the two officials do not meet with him.

Michael Gableman, who was hired by Assembly Speaker Robin Vos, R-Rochester, earlier this year to conduct the probe into how last November’s election was conducted, had initially requested interviews with mayors and city clerks in five cities — a demand from which he later backed off. But in a legal filing on Monday in Waukesha County, Gableman asked for an order compelling the mayors to comply with an Oct. 22 legislative subpoena.

In a statement Thursday, Madison Mayor Satya Rhodes-Conway reiterated she is open to testifying publicly about the city’s handling of last year’s election, which court decisions and a recount have affirmed President Joe Biden won in Wisconsin after getting almost 21,000 votes more than Donald Trump. 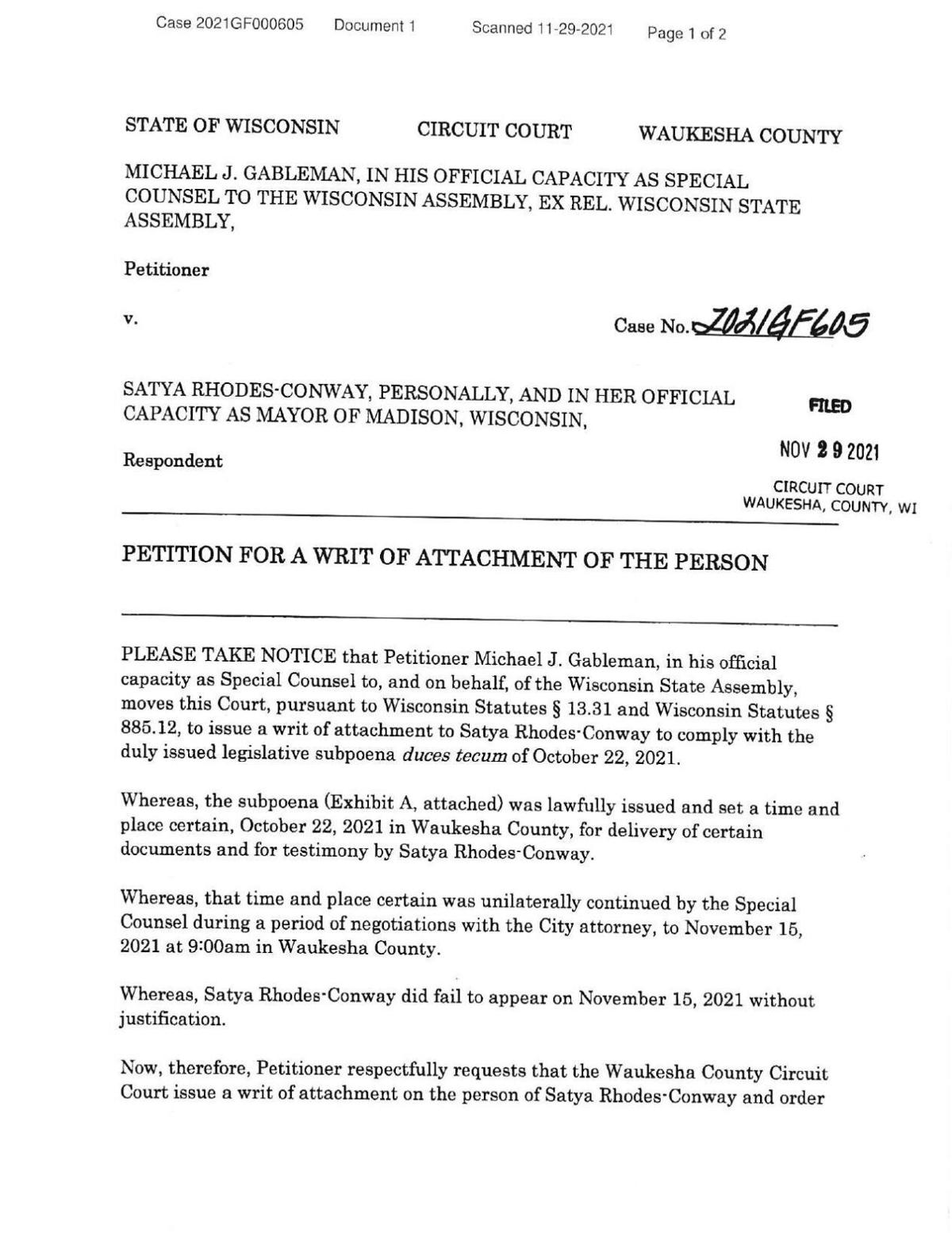 She said the Madison city attorney has told Gableman’s team details of any appearance would need to be worked out, but Rhodes-Conway contended the conservative former justice hasn’t responded, “further underscoring the abject lack of professionalism on Gableman’s team.”

An outside attorney for Green Bay Mayor Eric Genrich also criticized the latest legal filing — referred to as a writ of attachment — arguing such a maneuver isn’t legal to compel testimony and wasn’t filed in the correct court.

“Based on our initial review, the Petition is not only lacking in legal merit and built upon a gross distortion of the relevant facts, but it departs so greatly from legal standards that Mayor Genrich intends to serve the Special Counsel with a motion for sanctions,” attorney Jeffrey Mandell wrote a Waukesha judge.

Green Bay has provided nearly 20,000 pages of documents for the probe and has communicated the need for additional information on next steps but “has not received a substantive response,” according to a statement from the mayor’s office.

Democratic Attorney General Josh Kaul has dismissed Gableman’s probe as a “fake investigation” and has sought a restraining order barring Gableman from seeking interviews outside of a public legislative meeting. A hearing on Kaul’s lawsuit is scheduled for Dec. 23.

Gableman first hinted at the petitions to force the mayors to testify on Wednesday, during testimony before the state Assembly Campaigns and Elections Committee. The announcement was news to Madison, where City Attorney Michael Haas said later that day he hadn’t heard anything about them.

Also at Wednesday’s meeting, Gableman accused the Wisconsin Elections Commission, its administrator Meagan Wolfe, Genrich and Rhodes-Conway of “coverups” for refusing to cooperate with his probe.

Vos has allocated nearly $680,000 in taxpayer money for the one-party investigation, which is focused on some of the procedures voters and clerks relied on in casting and processing ballots.

Although some have raised the prospect of fraud, no claims of large-scale cheating have been substantiated, and the investigation, so far at least, is not seeking to review any ballots. Four voters out of roughly 3 million who cast ballots have been charged with fraud.

Gableman’s investigation largely focuses on how the 2020 election was carried out, with a specific focus on grants the Center for Tech and Civic Life provided to the state’s five largest cities. The group provided funding to 214 municipalities in the state to pay election workers and to purchase voting equipment, personal protective equipment, ballot drop boxes and other items designed to make voting easier and safer during a pandemic.

Top 10 Wisconsin political stories of 2021 (based on what you, the readers, read)

Multiple agencies have yet to rule on complaints filed nearly a year ago alleging the Republicans committed fraud.

In heavily gerrymandered Wisconsin, Gov. Tony Evers is the only resistance to state Republicans eager to reshape elections to aid their party.

The lawsuit, centered on whether non-elected agencies and bureaucrats could create public health orders, could affect whether executive agencies could create rules statewide.

In a 4-3 decision last year, the court sided with Republicans' request that the next maps deviate as little as possible from the current GOP-drawn maps.

GOP bills could reduce the number of weekly unemployment benefits, penalize those who turn down job offers

The package of seven bills, which appear likely to be vetoed by Democratic Gov. Tony Evers, would tie the number of weekly unemployment benefits an individual could receive to the state's overall unemployment rate.

Assistant District Attorney Matthew Westphal sent a letter Wednesday suggesting that the state or federal justice department would be best suited to determine what steps, if any, should be taken on the matter.

A project that will boost Great Lakes shipping in a crucial bottleneck and another intended to protect the lakes from invasive carp will get big funding increases under the Biden administration's infrastructure package, officials said Thursday.

Wisconsin's three transmission utilities would be able to block competitors from bidding on projects within their territories, which opponents say would boost their profits at ratepayers’ expense.