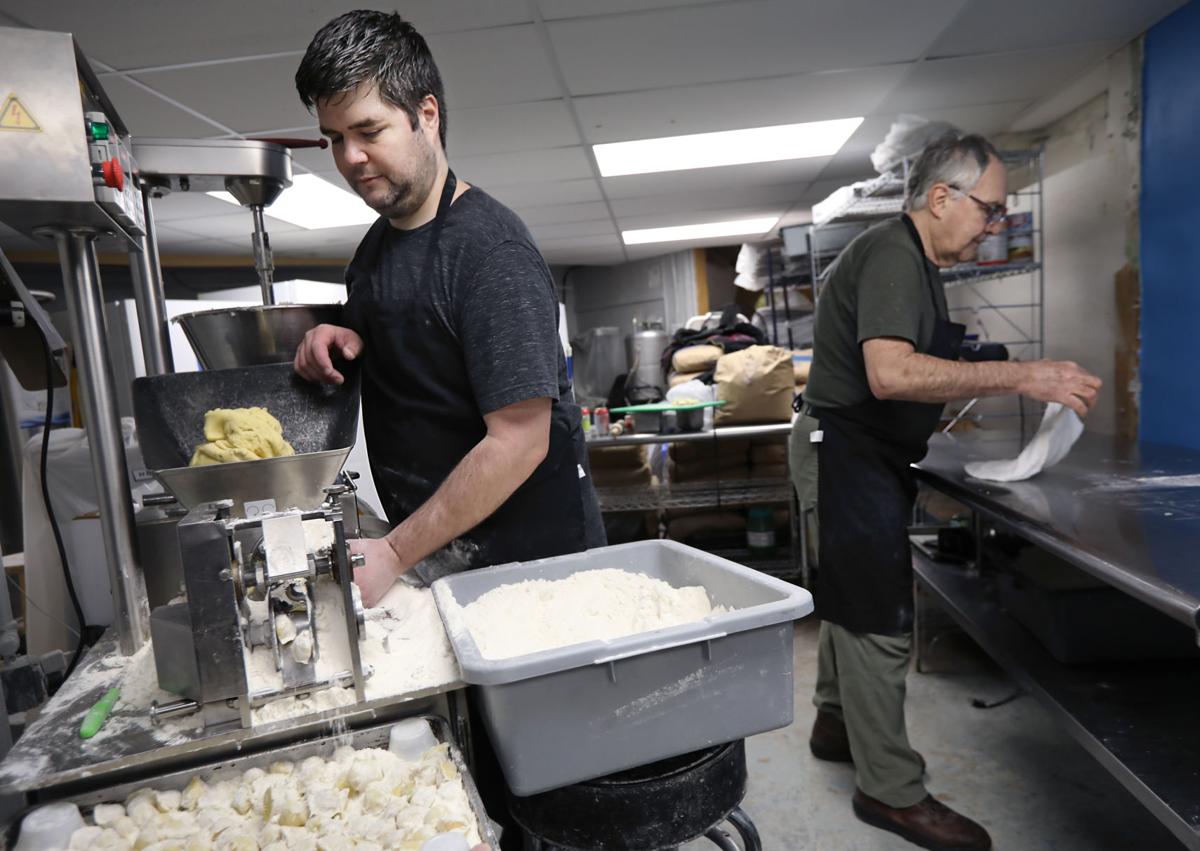 Paul Schwoerer, owner of Paul's Pel'meni at 414 W. Gilman St., makes Russian dumplings filled with potato using a machine with the help of his dad, Bill, right, in the restaurant's prep kitchen. 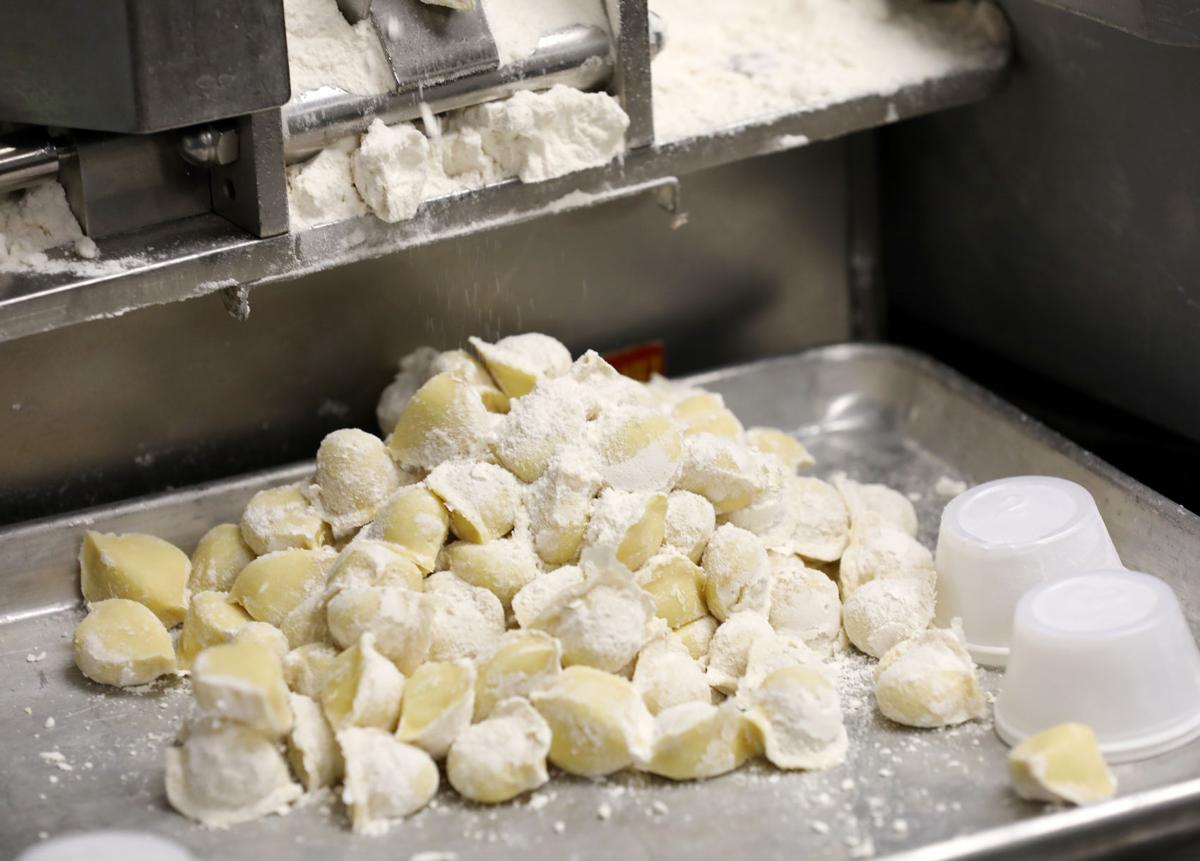 Paul Schwoerer has been serving up one main menu item -- Russian dumplings, or pelmeni -- for the better half of the past decade. "It's like peasant food," he says. 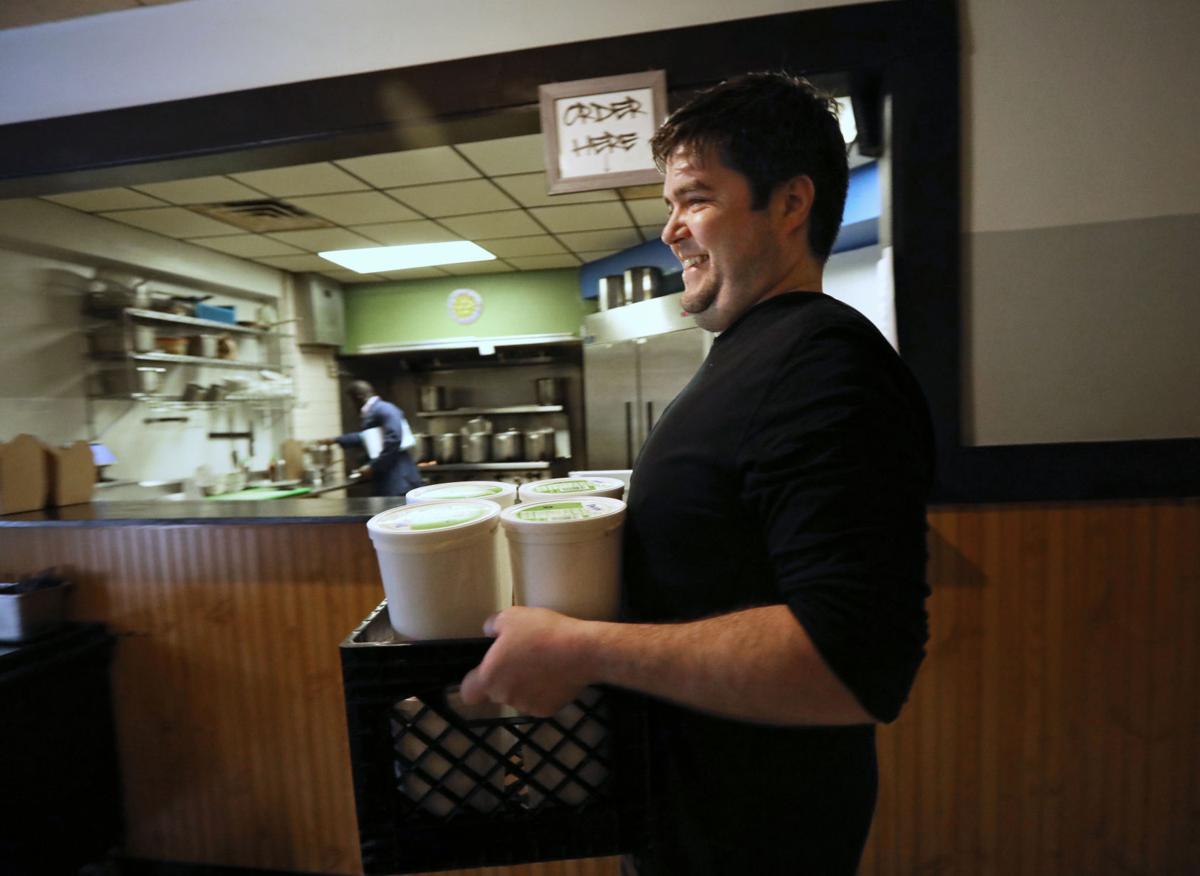 "Something about feeding people and them being appreciative is just extremely rewarding," says Paul Schwoerer, who makes Russian dumplings from scratch at his Gilman Street restaurant, Paul's Pel'meni.

Paul Schwoerer, the owner of Paul’s Pel’meni, a dumpling shop on Gilman Street, has had a better go of things after his second attempt to bring the Russian fare he learned to make in Alaska to the masses of Downtown Madison.

After stepping away in 2006 from the dumpling shop he opened on State Street in 2003 when he was 22, Schwoerer tried again in 2013, opening a new dumpling shop on Gorham Street. In 2017, he moved his shop to its current location at 414 W. Gilman St., where he’s continued to receive a steady stream of customers seeking his dumplings, which wouldn’t be complete without the “works” — a combination of butter, curry powder, sweet chili sauce and cilantro.

Schwoerer grew up in Madison but learned his dumpling-making craft in Alaska, after moving there with his parents when he was a teenager.

You learned how to make pelmeni as a young man living in Alaska. Tell me more about that.

I had multiple jobs (in Juneau). (I was) about 17 or 18. One of the jobs I got was helping this guy make these dumplings on the fisherman’s wharf. We made them out of an ice cream shop. The ice cream place closed at 9, and we go in there and sell dumplings from 9 to 3 a.m. At the time it was just plain dumplings, only beef, with butter and sour cream.

The second or third year we were there, this gentleman who (worked summers in the fishing industry) was a chef in Seattle. He came back and his idea was this curry seasoning, rice wine vinegar, sriracha blend of hot sauce, cilantro, and it just took off. Everybody loved it. My first thought in my head was “I’m taking this back to Madison.”

For the better half of the past decade, you’ve continued to serve just one major menu item: Russian pelmeni. Why?

I don’t need to saturate myself with a bunch of items on my menu to try to pull in a bunch of people. My thinking is to serve one unique dish that nobody else has, make it fresh from scratch, and the price point’s right. It’s like peasant food. It really is. The simplicity is more. Less is more sometimes. Because I’ve carried that torch from Juneau to Madison’s first location to this next location, I’ve been really hesitant to push for more.

What kind of need do you think your restaurant serves?

I’m proud just to feed (the) masses and that I’m not gouging. I think there’s some harmony to that that I like. Something about feeding people and them being appreciative is just extremely rewarding. We’ve all got to make a living, we all have to make money, for sure, that’s important, but it’s a good feeling. I care a lot about the product. It’s not some turn-and-burn deli meats and some sliced vegetables on some white bread. It’s thoughtful. I think that people can see that in something as simplistic as Paul’s Pel’meni.

Why do you think you’ve had success in Madison?

A few reasons. I think that the Madison community likes small business, they like to support small business. I think what you’ve seen Downtown is that the cost of just doing business is so high that a lot of places Downtown can’t afford to serve much quality. When it comes to something homemade, something from scratch, also just the cost of living goes up for everybody. The wages have stayed the same for the most part. The $25 entree, $35 entree — people can’t afford that. In a day and age when you’re working more for the same, a place like this is perfect for you. Go get a decent, filling meal that’s not a burger, it’s not a piece of pizza, it’s not a burrito. It just kind of fills in some of that space. People appreciate it because it’s a good dish for a good price.

What are the values that guide your business?

It’s critical to pay living wages. If you want to have a small business and you want your employees to reflect your values, you need to make sure that they can afford a place to live. Nobody here makes less than $12 an hour and everybody makes at least $5 an hour in tips, so everybody here makes at least $15 to $20 an hour. Their quality of life is going to reflect your business. I’ve only raised my prices twice, ever. I leave room for somebody to give a dollar for a tip. I leave that room for a tip because it’s so nice when you work in customer service, especially in the restaurant industry, having cash in hand when you leave.

Senate votes to restrict use of PFAS in firefighting foam

The GOP-authored bill on PFAS passed the Senate along party lines Tuesday. Democratic lawmakers argue the legislation does not go far enough.

State to collect $818 million more in revenue than projected

With the added revenue, Republican leaders have said they'd like to explore possible tax cuts, while Democratic lawmakers are more interested in investing in underfunded programs

The bill, authored by a bipartisan coalition and unveiled in April, would create the first statutory guidelines in Wisconsin for how to process sexual assault kits.

Senate to vote on homeless shelter funding, Assembly to take up opioid bills in Tuesday sessions

After months of stalling, the Senate will vote on a bill that would allocate $500,000 per year to a grant program that supports emergency homeless shelters.

He was one of two GOP appointees on the three-member commission, which oversees the state’s electric, gas, water and telecom industries.

Advocates say the commission will provide more transparency than Republicans' secretive process, but others note courts will have the final say.

Paul Schwoerer, owner of Paul's Pel'meni at 414 W. Gilman St., makes Russian dumplings filled with potato using a machine with the help of his dad, Bill, right, in the restaurant's prep kitchen.

Paul Schwoerer has been serving up one main menu item -- Russian dumplings, or pelmeni -- for the better half of the past decade. "It's like peasant food," he says.

"Something about feeding people and them being appreciative is just extremely rewarding," says Paul Schwoerer, who makes Russian dumplings from scratch at his Gilman Street restaurant, Paul's Pel'meni.