Only a tiny fraction of the absentee ballots in next week’s election that have been returned so far by Wisconsin voters have been rejected or still lack the information needed to count them, according to the state Elections Commission.

That’s one improvement from an April election that saw multiple voting problems, and it could give voters confidence that their votes will be counted amid a historic increase in absentee voting, court challenges over voting rules and unfounded allegations by President Donald Trump and others that voting by mail is rife with fraud.

As of Tuesday, clerks reported problems with just 1,506 absentee ballots out of 1.45 million submitted, with 967 of them returned to voters so that they could be corrected. The remaining 539 were rejected for a variety of reasons that don’t necessarily mean the voters who submitted them didn’t get to vote. The numbers do not include ballots that had mistakes that were corrected and have already been returned to clerks’ offices.

Voters who failed to provide required information on their ballot return envelopes, known as the certification, will have until 8 p.m. on Election Day, this coming Tuesday, to provide it and have their vote counted.

For most voters, the three key pieces of information they must provide on the back of their return envelopes are their signature and the signature and address of a witness. In some cases, voters will also need to fill out their own voting address — typically one’s home — if the clerk hasn’t already filled it in.

Military or overseas voters must also include their birthdates, and for voters getting help with voting, their assistants have to sign as well.

Reasons the 539 ballots were rejected could include that the voters who requested them spoiled them on purpose because they decided to vote in person, or the voters had moved, according to the Elections Commission. They could also include ballots returned by felons currently in jail or prison, or on probation, parole or extended supervision and thus not eligible to vote.

Problems could still occur with the ballots themselves once the envelopes are opened, just as ballots cast at the polls sometimes contain errors.

State law does not require clerks to give voters who submit insufficient absentee ballot certifications the chance to correct them, but that is what the Elections Commission recommends, Magney said.

Absentee voting is expected to skyrocket in Wisconsin on Nov. 3. Here's how to do it

“In a normal year, when clerks may be dealing with dozens or hundreds of absentee ballots instead of tens of thousands, it’s not usually an issue,” he said. “But with a crush of absentee ballots coming in close to the election, clerks probably do not have time to reach out to every absentee voter with a problem.”

“We do the best we can,” said Wendy Helgeson, clerk of the Outagamie County town of Greenville and president of the Wisconsin Municipal Clerks Association, but “the voter should really read the instructions.”

Madison City Clerk’s office employee Nikki Perez said that as of Tuesday, 87 absentee ballots whose envelopes contained certification errors had been returned to voters but not yet corrected and resubmitted. The office does not keep track of the total number of ballots it’s had to send back, so calculating an overall error rate for absentee ballots was not possible. As of Tuesday, 98,609 ballots had been returned to the office, either sent through the mail, dropped off at the office or in drop boxes throughout the city, or filled out during in-person early voting, which began Oct. 20.

The COVID-19 pandemic has made absentee voting much more popular this year, and the Elections Commission reports that as of Tuesday, nearly 1.8 million people had requested absentee ballots, with only about 6,600 yet to be sent out.

The presidential primary and statewide election in April saw a shortage of poll workers in some places and, as a result, long lines at the polls on Election Day. A series of voting-related court decisions leading up to the election also likely left some voters confused about the vote-tallying process, and mail-delivery delays and inconsistencies led to some ballots getting lost and others not being counted, depending on whether they had the proper postmark.

The Elections Commissions has since revamped absentee instructions to make them clearer and sought to provide other guidance to clerks and the public.

“I think we’re going to do a lot better in this election,” Magney said.

The U.S. Supreme Court refused on Monday to extend the deadline to receive and count ballots, as Democrats had wanted, and Democrats and Republicans alike on Tuesday were pushing their voters to get their ballots in as soon as possible.

It’s not clear if the ruling will benefit one side or the other in Wisconsin, which President Donald Trump won by fewer than 23,000 votes in 2016, said Barry Burden, a UW-Madison political science professor and the director of the Elections Research Project.

Trump was campaigning in Wisconsin on Tuesday and his Democratic challenger, Joe Biden, was scheduled to visit the state on Friday.

“The fact that Democrats are using mail voting more than Republicans are suggests that the Biden campaign would be hurt more by ballots that come in late,” Burden said.

However, since an appeals court already ruled nearly three weeks ago not to extend the deadline, Democrats have been working under the assumption that the deadline for returning ballots would be 8 p.m. on Election Day and have helped shatter the state record for returning absentee ballots, Burden said.

Drop off your absentee ballot

Election officials are recommending voters with absentee ballots drop off their completed ballots at their local clerk's office or a ballot drop box, if there is one, starting Wednesday, after the U.S. Supreme Court on Monday ruled that all ballots in Wisconsin must be in by Election Day, Nov. 3, to be counted. Ballots placed in the mail on Wednesday or later might not reach clerks' offices on time.

Madison has installed 14 ballot drop boxes around the city. Ballots will last be collected from the drop boxes by 5 p.m. on Nov. 2, the day before the election.

Fire Station 2: 421 Grand Canyon Drive, west side of Grand Teton Parkway before the station's back driveway.

Fire Station 5: 4418 Cottage Grove Road, on Atlas Avenue between the bus stop and the station's back driveway.

Fire Station 8: 3945 Lien Road, east of station on east side of Parkside Drive.

Fire Station 9: 201 N. Midvale Blvd., behind station on west side of Meadow Lane.

Fire Station 10: 1517 Troy Drive, north side of station near the intersection of Troy Drive and Hanover Street.

Fire Station 11: 4011 Morgan Way behind station on east side of Crossing Place between station driveway and intersection of Crossing and Nelson Road.

Elver Park Shelter: 1250 McKenna Blvd., in island of the circle drive near the park shelter.

From the opening of the polls through the tabulation of the ballots, the State Journal brings you the latest Election Day updates on all local, state and national races.

Absentee voting is expected to skyrocket in Wisconsin on Nov. 3. Here's how to do it

People planning to vote absentee for the first time from their current addresses will need to provide a copy of a qualifying photo ID. 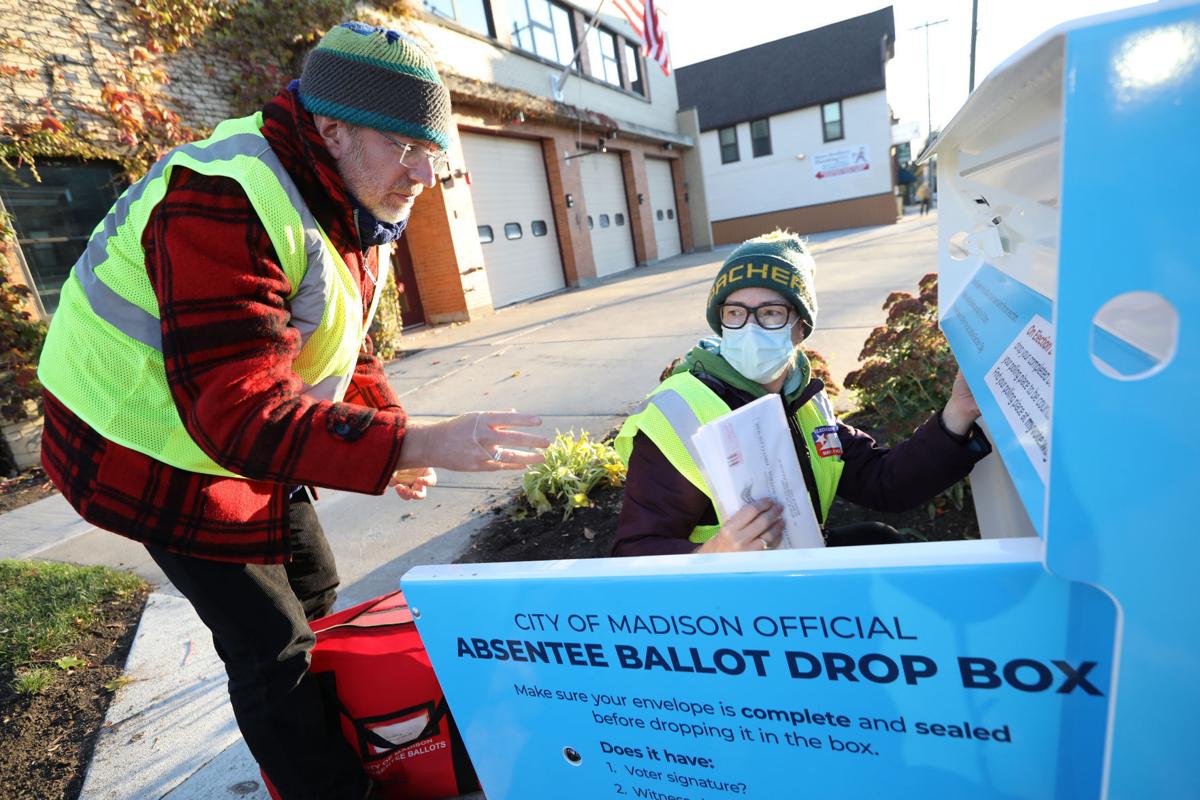 Election officials Erik Gunneson and Meg Hamel retrieve absentee ballots Tuesday from one of the city's 14 fixed ballot drop boxes outside of Fire Station 3 on Williamson Street in Madison. With just one week left to get your ballot in, election officials recommend those voting absentee drop their ballots off at their local clerk's office or in a drop box. 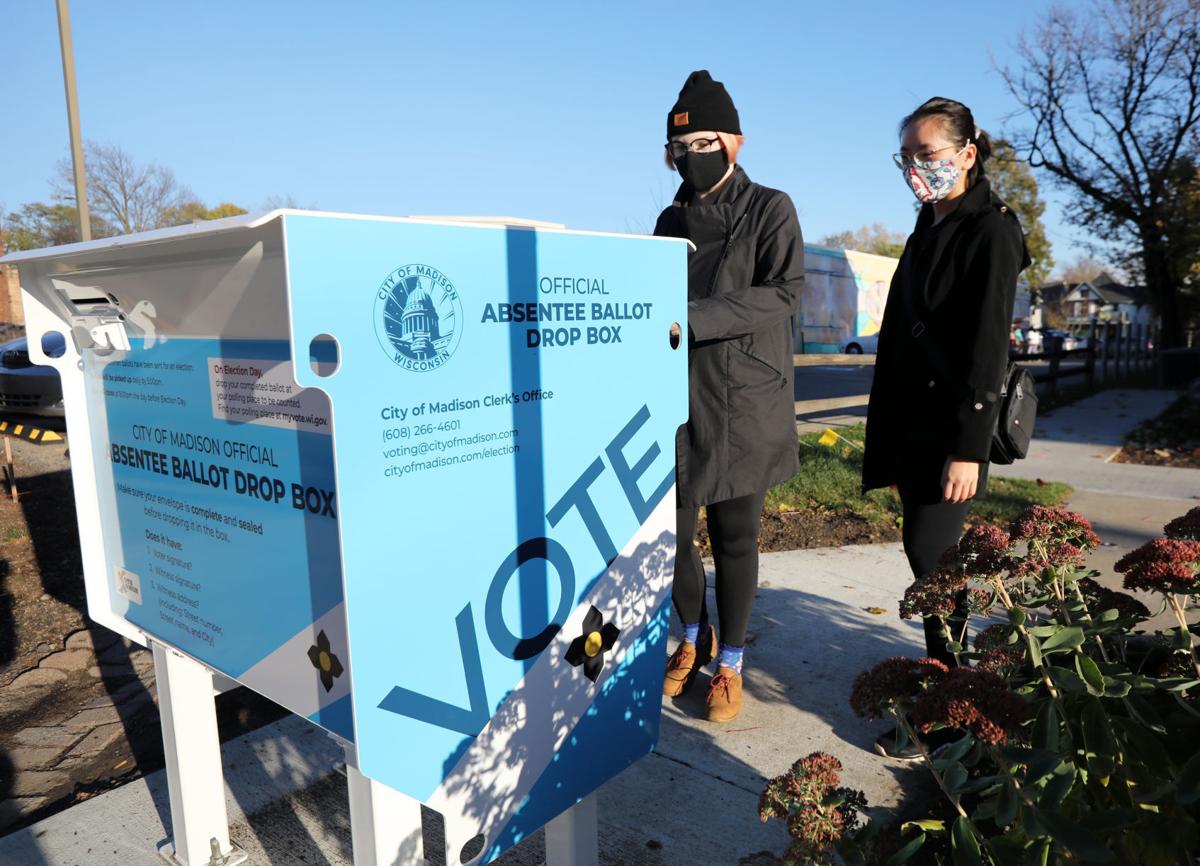 Drew Agnew, left, and AmySue Greiff deposit their absentee ballots Tuesday at a ballot drop box on Madison's East Side. Workers will continue to empty the boxes daily until 5 p.m. Monday, the day before the election.