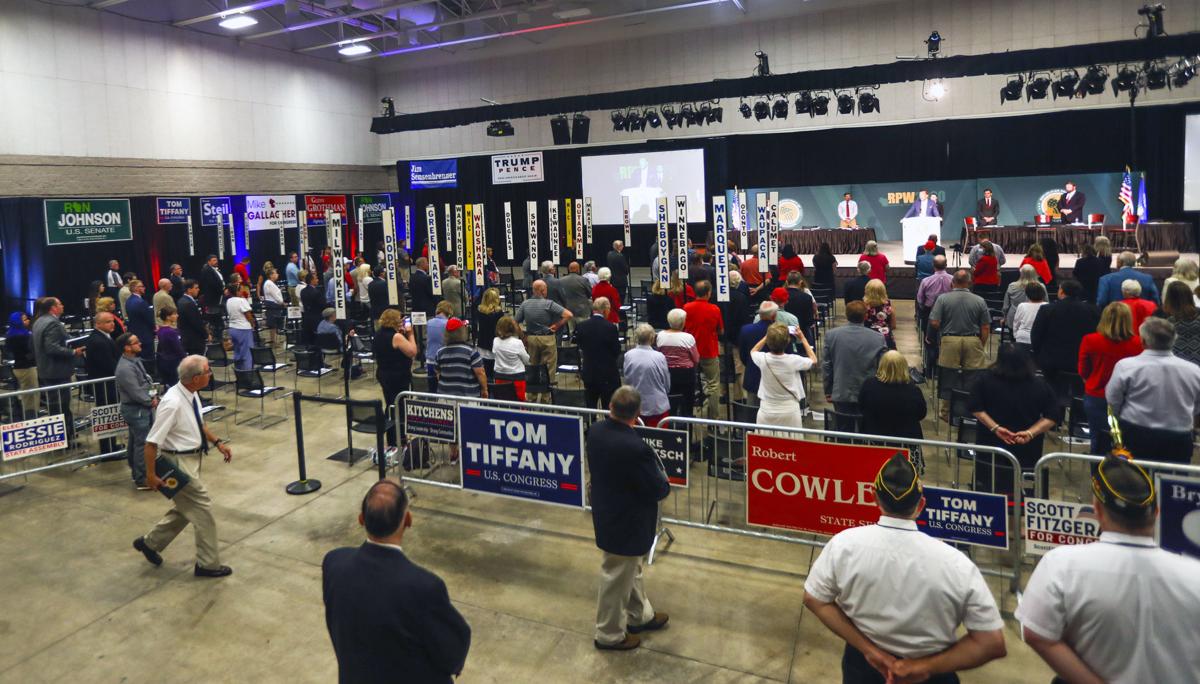 A pastor speaks during an invocation prayer Saturday at the annual Republican Party of Wisconsin convention at KI Convention Center in Green Bay. 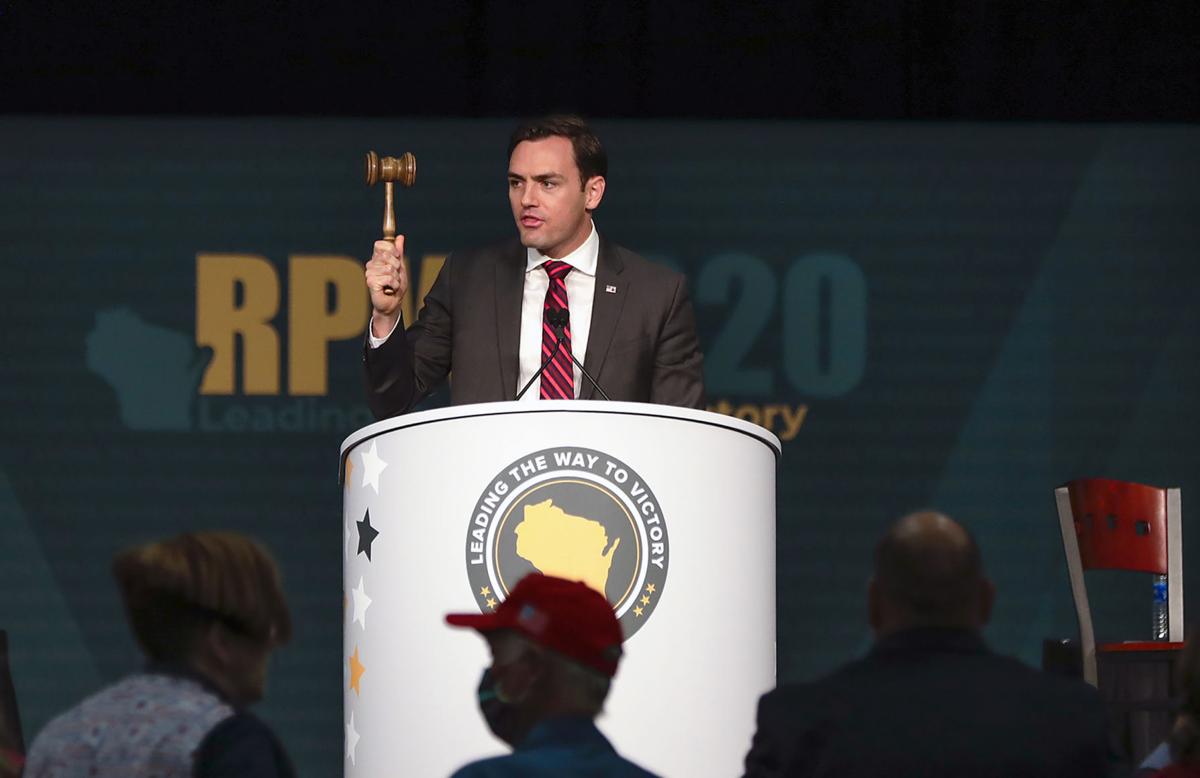 "They're trying to tear things down, so we must stand up," U.S. Rep. Mike Gallagher told the crowd Saturday at the annual Republican Party of Wisconsin convention, where speakers warned against the "left mobs," in reference to Black Lives Matter protests nationwide condemning the death of George Floyd in Minneapolis police custody. 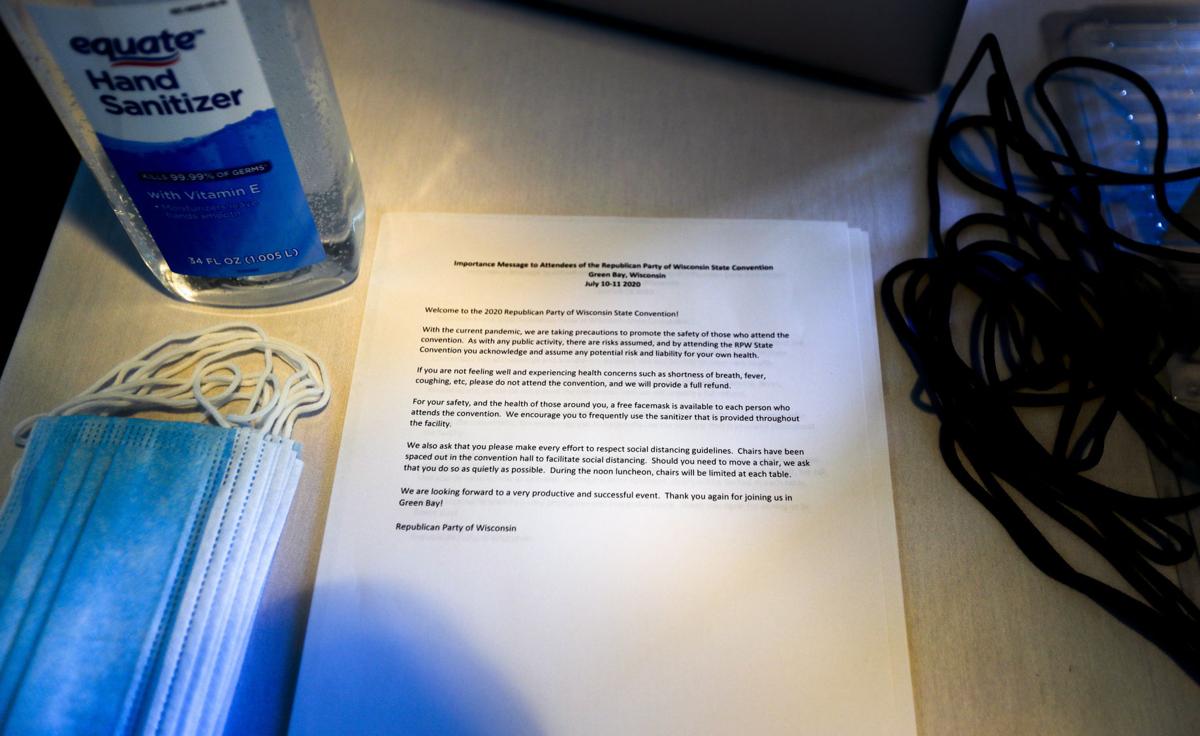 A message is displayed to attendees at the Republican state convention along with hand sanitizer and face masks, which few wore.

Wisconsin Republicans gathered for their annual convention this weekend in Green Bay to support President Donald Trump’s re-election campaign, while signaling opposition to what many described as a dangerous Democratic agenda led by presumptive nominee Joe Biden.

The Republican Party of Wisconsin moved forward with an in-person convention on Friday and Saturday, despite public health concerns over doing so amid the COVID-19 pandemic, which has seen an uptick in positive cases in recent weeks.

Two of the state’s most prominent Republicans, Assembly Speaker Robin Vos, of Rochester, and U.S. Sen. Ron Johnson, of Oshkosh, were absent, citing other engagements.

The 2020 presidential campaign comes during unprecedented national challenges, including the coronavirus pandemic, historic rates of unemployment, and civil unrest over reports of police brutality.

Speakers at the convention warned against the “left mobs” — in reference to the ongoing Black Lives Matter protests nationwide condemning the death of George Floyd in Minneapolis police custody. Demonstrators have toppled statues across the country, including in Madison, in efforts to draw attention to racism.

“They’re trying to tear things down, so we must stand up,” U.S. Rep. Mike Gallagher said. “Let them say that we stood for America’s flag, because we stand for America itself and we stand for the simple idea that America is the greatest country in the history of the world.”

“He will keep our communities safe and he will always stand by our police officers, who many times are the heroes of our communities,” Schlapp said. “He will not defund the police and this president will stand on the side of law and order.”

However, Democrats were quick to point out that Trump on Friday commuted the sentence of his longtime political friend Roger Stone, who was slated to begin serving a 40-month prison sentence for lying to Congress, witness tampering and obstructing the House investigation into whether Trump’s campaign colluded with Russia to win the 2016 election.

Speakers at the convention also praised Trump’s handling of the COVID-19 pandemic, including the president’s push to reopen the nation’s economy and schools.

More than 900 new positive COVID-19 cases were logged by the Department of Health Services on Saturday, marking the third consecutive day of record-setting positive cases in Wisconsin. Of the more than 35,000 Wisconsinites who have tested positive for COVID-19, 78% have recovered and 821 people, or 2.3% of positive cases, have died.

“These speakers and (Wisconsin Republicans) are following Trump’s lead by ignoring the deadly crisis that is COVID-19 and don’t have the slightest understanding of the pain and suffering so many people across the badger state are experiencing because of this president’s gross incompetence,” Philip Shulman, a spokesman for the Democratic Party of Wisconsin, tweeted Saturday.

Has Donald Trump kept campaign promises to Wisconsin? Does it even matter?

“What did they have, a virtual event? I don’t think anyone was watching,” Schlapp said.

The GOP state convention was originally scheduled for May, but was pushed back. The Democratic National Convention in Milwaukee was pushed back until August due to COVID-19, but it’s still unclear what the event, which would otherwise attract 50,000 visitors, will look like.

U.S. Sen. Jim Sensenbrenner, who is retiring later this year after more than 40 years in Congress, also did not attend the convention, following the death of his wife, Cheryl, last month.

Johnson, who provided comments at the convention via video, said he was celebrating his 65th birthday and unable to attend Saturday, while Vos said on Twitter he was attending a family wedding.

“First convention I’ve missed in decades,” Vos tweeted. “Excited to get to November and prove all of the angry left wrong!”

On Saturday, Republicans spoke to the importance to vote down ballot this November, especially considering next year’s redrawing of legislative district maps. Gerrymandered districts created by Republicans 10 years ago have granted the party a decade-long majority in both chambers.

Nygren said securing a supermajority in the state Senate and Assembly this fall “is within reach.” Such a two-thirds majority would give Republicans the ability to successfully override any veto by Democratic Gov. Tony Evers.

The state Democratic Party this year launched a Save the Veto campaign with the goal of holding all their seats and preventing Republicans from reaching a supermajority.

In his last five months on the PSC, Mike Huebsch voted to authorize two Dairyland-affiliated projects worth nearly $1.2 billion.

The White House on Monday issued a memorandum extending the use of the National Guard through the end of 2020.

More than 330,000 absentee ballots already returned ahead of next week's primary

The surge in absentee ballots follows the record-breaking 1.3 million mail-in ballots received in the state's April presidential primary and underscores a trend of increased absentee voting among Wisconsinites during the COVID-19 pandemic.

In his last five months on the PSC, Mike Huebsch voted to authorize two Dairyland-affiliated projects worth nearly $1.2 billion.

The 26th District is strongly Democratic, and there are no republicans currently running, so the next state Senator is expected to be one of the seven Democratic candidates facing off in the August primary.

Gov. Tony Evers mask order is set to go into effect Saturday. Fitzgerald did not indicate when the Senate might convene. The GOP-led Assembly also would have to vote to strike down the order for it to take effect.

The candidates running to represent the Madison area this year bring a wealth of experience.

Interim System President Tommy Thompson said he has confidence in the the cheaper tests, which he admitted are accurate roughly 96% of the time, compared with the 98% accuracy of more expensive tests.

The statewide mask order potentially sets up another legal battle between the Democratic governor and state GOP leaders, who successfully sued to strike down Evers' stay-at-home order earlier this year and have opposed a state mask rule.

Gov. Evers said a "yet-to-be determined" number of Guard members will mobilize to state active duty to support the Wisconsin Elections Commission and municipal clerks across the state with the upcoming election.

A pastor speaks during an invocation prayer Saturday at the annual Republican Party of Wisconsin convention at KI Convention Center in Green Bay.

"They're trying to tear things down, so we must stand up," U.S. Rep. Mike Gallagher told the crowd Saturday at the annual Republican Party of Wisconsin convention, where speakers warned against the "left mobs," in reference to Black Lives Matter protests nationwide condemning the death of George Floyd in Minneapolis police custody.

A message is displayed to attendees at the Republican state convention along with hand sanitizer and face masks, which few wore.