Once a desert, Lone Rock airport battles repeated flooding and now the COVID-19 pandemic
0 comments
Share this
Return to homepage × 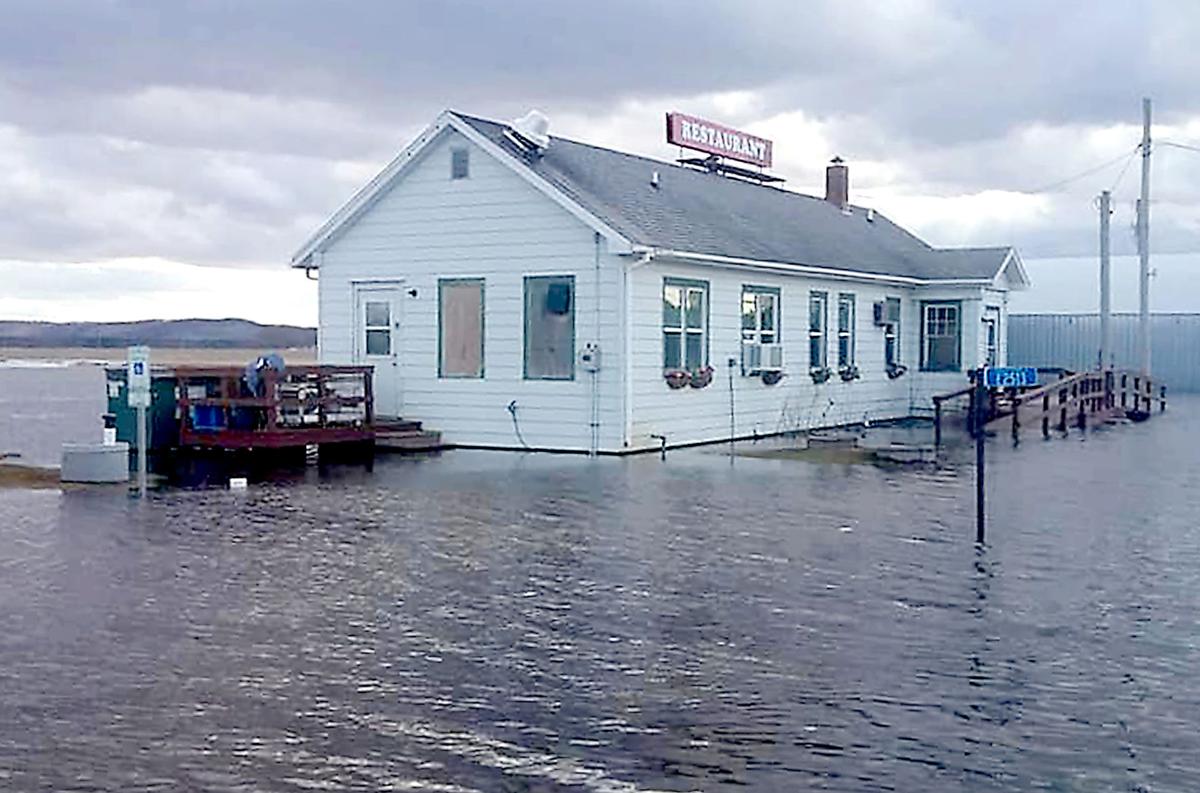 The Piccadilly Lilly Airport Diner at the Tri-County Regional Airport was closed for three months last fall after heavy rains resulted in flooding. 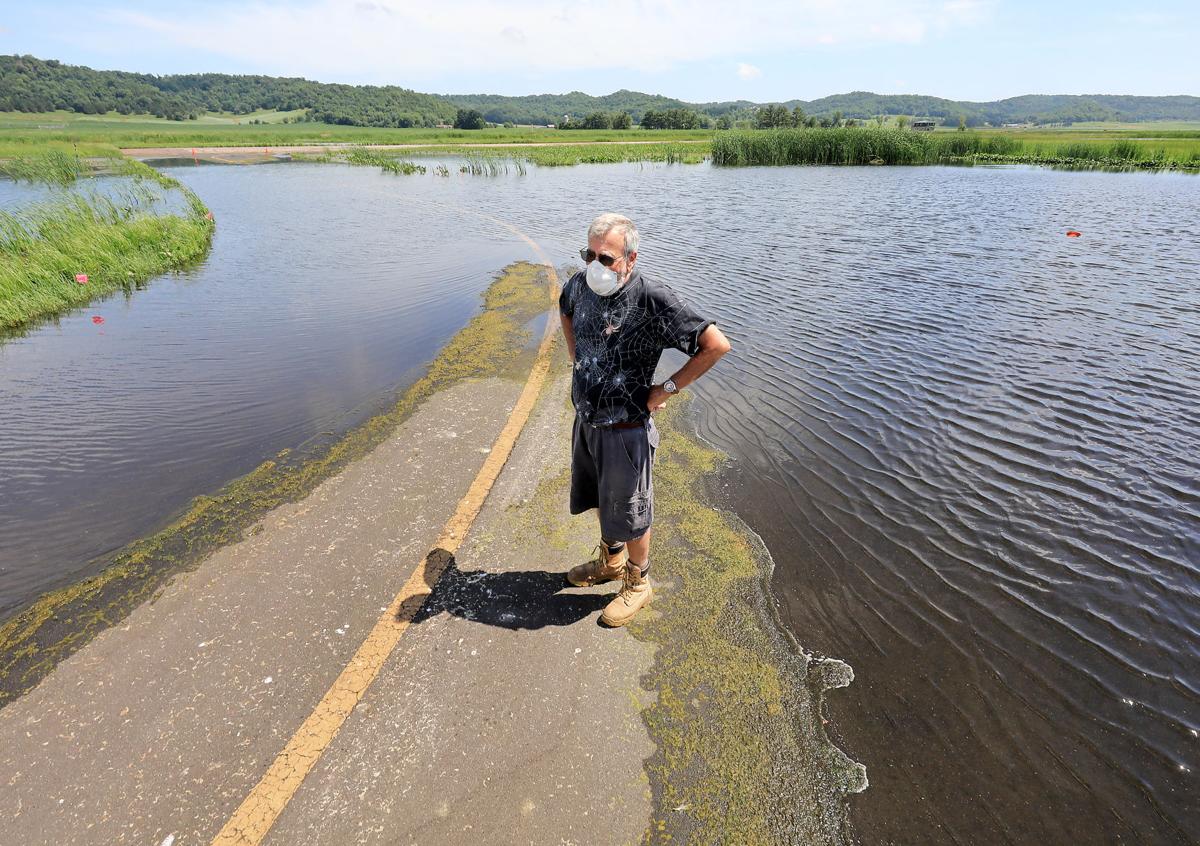 Marc Higgs, manager of the Tri-County Regional Airport in Lone Rock, looks over a taxiway that was partially submerged last week, several days after rains moved through the area. Flooding has become more common at the airport and officials are studying ways to reduce the negative effects of heavy rainfall.

LONE ROCK — Marc Higgs remembers when this flat stretch of earth bounded by the Wisconsin River to the south and the unglaciated bluffs to the north was essentially a desert, complete with prickly pear cactus.

Heavy rains were rarely a concern and flooding issues were kept at bay due to the sandy soil that would quickly drain major douses of water.

But for the past 25 years or so, water has been increasingly problematic at the Tri-County Regional Airport.

The land here now resembles a swamp, and the cactus have been supplanted with cattails and reeds. The water table is near the surface and ducks, geese and sandhill cranes are a constant threat to the aircraft that land on the nearly mile-long paved runway nestled 719 feet above sea level.

Last week, work crews were busy making repairs to the pilot’s lounge damaged by flooding last fall, while the primary taxiway remained closed and covered with water from a heavy downpour on June 26. The new lightning detection system was kept busy, but there wasn’t enough rain to flood the tarmac.

“This was all dry. It was a totally different ecology,” said Higgs, named airport manager in 1995. “It was sandy and the water table was about 20 feet down. It’s definitely not the same as when I came here. It’s turned into a wetland. It started in the mid-(1990s), but the last three years have been the worst.”

Studies are being done to try and remediate the flooding issues, and there is a plan for next year to raise the taxiway and install a culvert underneath. That would keep water from pooling on the pavement and forcing aircraft to take a longer route to and from the runway when it becomes too deep, Higgs said.

Flooding was first recorded in 1993 and has become more frequent. In 2019, the airport was flooded in March and then again in the fall. Of the 200 acres of land owned by the airport, about 80 acres are no longer able to be rented to area farmers due to near constant wet conditions. Higgs was thankful last Monday’s storm, which dumped several inches on southwestern and southern Wisconsin, bypassed Lone Rock, something he never thought about in 1988 when he came here to work as a mechanic.

“Three inches would have been really ugly,” said Higgs, 68. “It’s as flat as a pool table here.”

But the floods impact more than the taxiway and airport operations. They have also been detrimental to the Piccadilly Lilly Airport Diner, a popular spot for locals and pilots alike, named after a famed World War II bomber. Located in a building that at one time was used for flight services and filled with teletypes, the cafe was closed for a week in spring 2019 and for more than three months last fall due to flooding.

In March, COVID-19 brought another obstacle to Jessica Hein, who began working at the two-room cafe in 2014. In December, Hein took over operations from her aunt, Kathryn Spenulson, who had run the restaurant since May 2008. A few weeks after purchasing the business, Spenulson experienced a major flood when most of southern Wisconsin sustained record rainfall. Fortunately, the building is elevated.

Hein’s been offering carryout service and outdoor seating under a tent, running the restaurant largely by herself. She has limited seating inside and, in addition to being open for breakfast and lunch seven days a week, serves a spaghetti dinner on Monday nights and fish on Friday evenings that have helped bring in more revenue. A friend launched a GoFundMe page in early June in an attempt to raise $40,000, but as of last week it had generated just $690. Hein didn’t qualify for the Payroll Protection Program and was turned down for a small business loan.

“It’s been really rough, but I’m not one to give up,” said Hein, 34, who is unsure how long she can hang on. “I love it here. I have a lot of good customers who support me as much as they can.”

One of the regulars is Herman Kaldenberg, who quit high school to serve in the 24th Infantry Division during World War II. Kaldenberg, 96, of Lone Rock, had an order of coffee and toast last week as he read the Wisconsin State Journal and chatted with customers. He was set up just inside the front doorway, while Hein worked in the kitchen cleaning and hoping for more orders. The restaurant is only half the size as normal due to COVID-19, with the backroom dining area separated from the front with a plastic sheet. The Piccadilly Lilly is the only restaurant in Lone Rock.

“We need to support this diner so it stays,” said Kaldenberg. “We can’t get along without eating, and (Hein) can’t survive without customers.”

The airport has been around since the early days of aviation and before there was a commercial airport in Dane County. Established in 1923, the Lone Rock Airport, as it was called then, was designated in 1927 as an emergency airmail landing field because it was located halfway between Chicago and Minneapolis. At the time, what is now the Dane County Regional Airport was a cabbage patch and Royal Airport was just getting up and running in Monona at what is now South Towne.

According to a history published in Midwest Flyer, the Lone Rock airfield was a destination for training flights from Glenview Naval Air Station near Chicago during World War II. After the war, the facility was controlled by the Civil Aeronautics Administration and a flight service station was established to provide weather reports and air traffic control for southwestern Wisconsin.

In 1954, the CAA relinquished control of the airport and it became the property of Richland, Sauk and Iowa counties. The flight station remained in service until the mid-1980s before it was converted into a restaurant, and in 2002 automation replaced the Federal Aviation Administration’s manned weather station.

The airport is now home to 42 aircraft and includes hangars for Cardinal Glass, Gold Leaf Investments and Meister Cheese, and a facility for Johnson Bros. Flying Service, an aircraft maintenance and restoration company. Prop and jet aircraft land here from around the country and can include customers checking up on their custom vehicles being put together at Ring Brothers in nearby Spring Green, cattle buyers and others with business in southwestern Wisconsin.

But COVID-19 has resulted in a decrease in traffic. The airport has an annual budget of $240,000, about 85% of which is funded with operational revenue, including the sale of about 20,000 gallons of fuel. As of last week, Higgs had sold only 2,600 gallons, most of which was sold in January.

There also won’t be a bump in fuel sales and customers at the diner in late July and early August since AirVenture in Oshkosh is canceled. In addition, Iowa County will give up its ownership piece of the airport in January and no longer provide $16,000 in funding.

So for now, and likely the remainder of the year, the airport and diner will rely primarily on hobbyists who can self-isolate in the cabins of their small planes.

On Tuesday of last week, Ed Asmus flew his 1973 Cessna 337G Skymaster from Aurora, Illinois, to Lone Rock, where he purchased fuel and grabbed lunch from the diner. Asmus, 53, works as an air traffic controller at the Chicago Air Route Traffic Control Center, where he guides jumbo jets and other aircraft into and out of O’Hare and Chicago Midway international airports. Asmus will fly his Skymaster at 180 mph to Reedsburg, Madison, Boscobel, Janesville and Iowa, but Lone Rock is an attractive destination since it’s only a 45-minute flight from his home, offers fantastic views from above and allows him to park his plane just a few yards from the diner.

“There’s a lot more airports than there are airports with restaurants,” said Asmus, who has had his pilot’s license for more than 30 years. “If the restaurant doesn’t make it, I would suspect that traffic here would fall off. It is the draw so I hope they can hang on.” 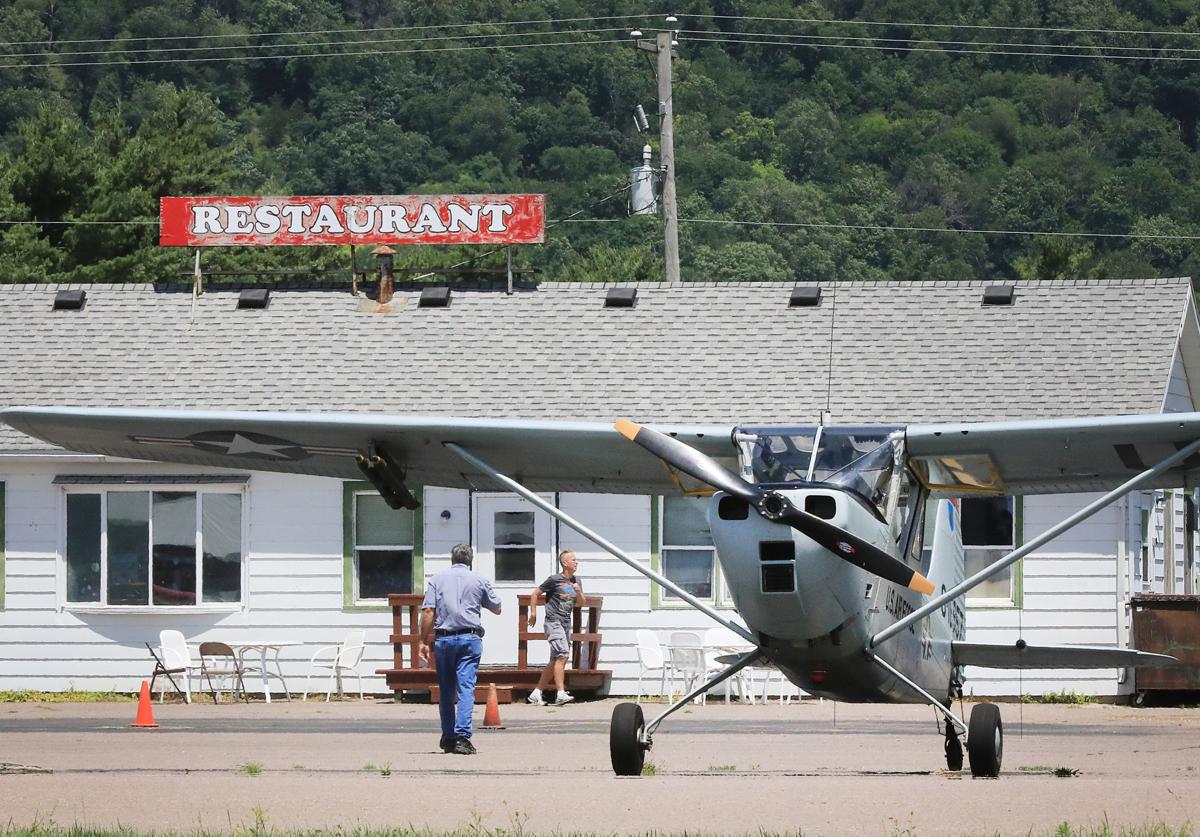 The Piccadilly Lilly Airport Diner draws customers from across the Midwest, but is struggling to survive due to a rash of closings caused by flooding and COVID-19. 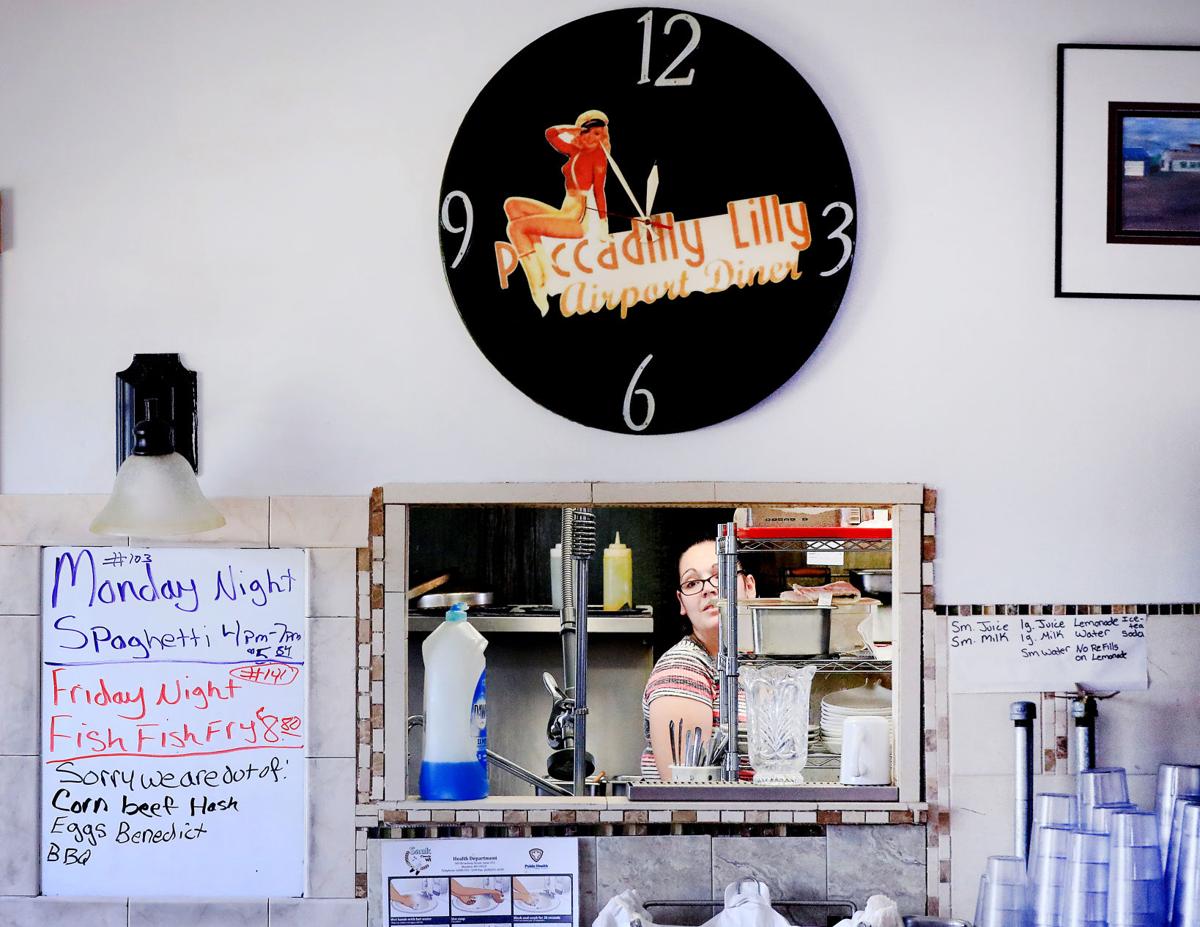 Jessica Hein works in the kitchen of her Piccadilly Lilly Airport Diner last week. Hein purchased the business from her aunt in December and is trying to keep the business afloat. 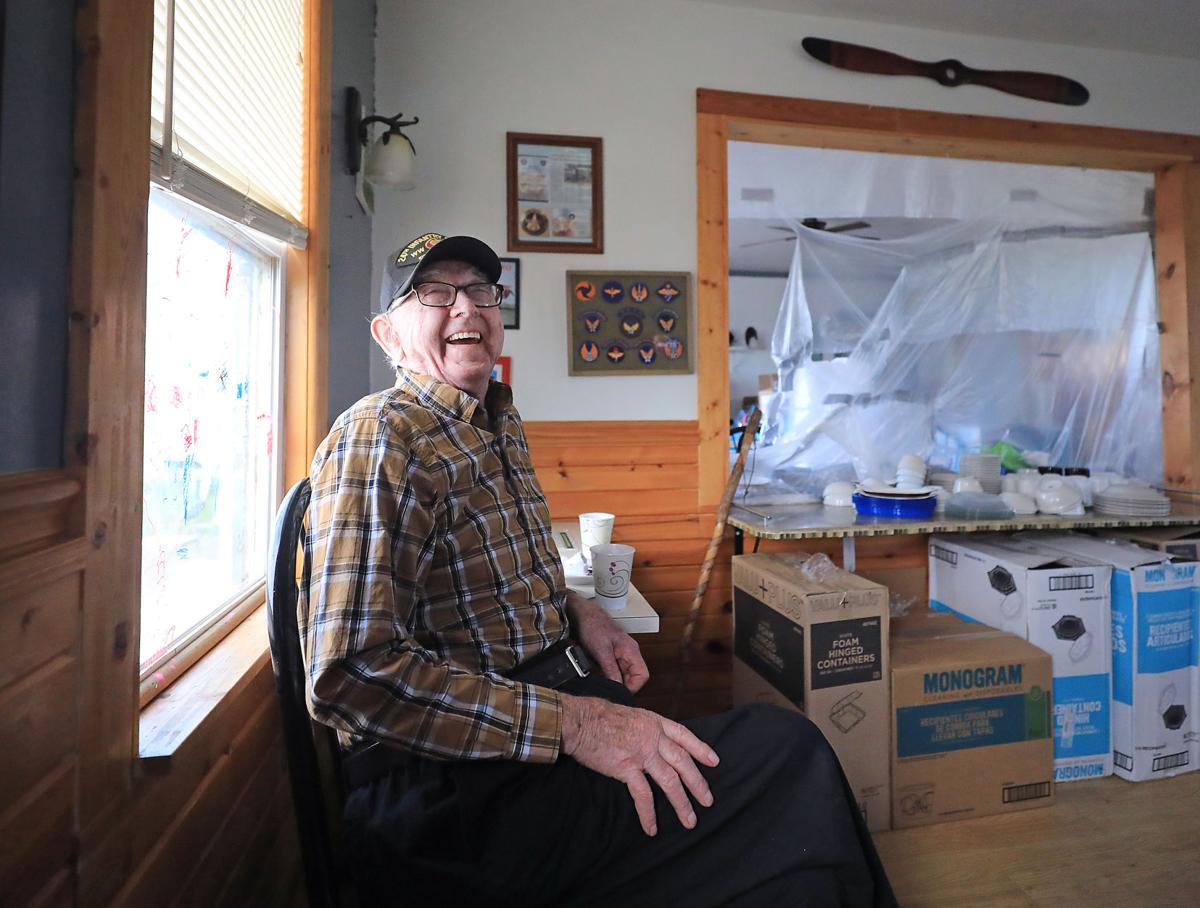 Herman Kaldenberg, 96, is a regular customer at the Piccadilly Lilly Airport Diner in Lone Rock. 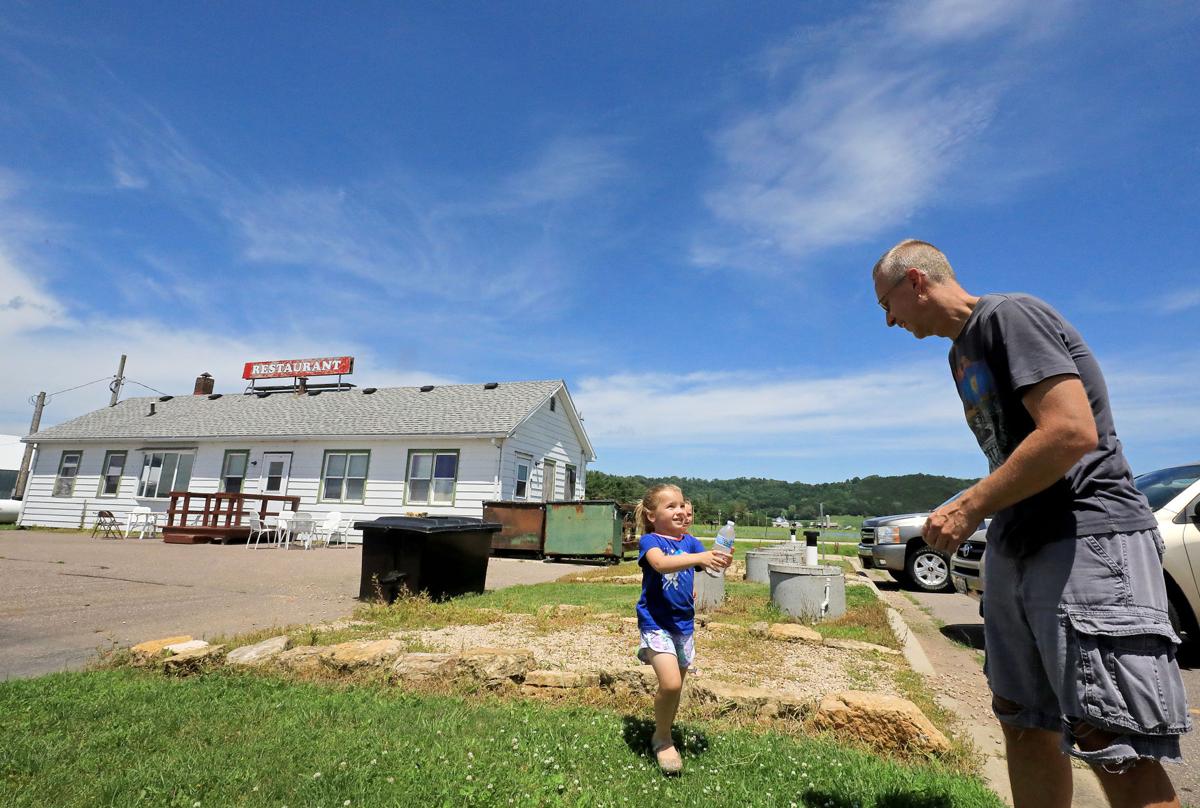 Juliet Hein, daughter of Piccadilly Lilly owner Jessica Hein, offers water to pilot Ed Asmus upon his arrival from Aurora, Illinois, at the Tri-County Regional Airport. The restaurant is a big reason why pilots like Asmus fly to Lone Rock. 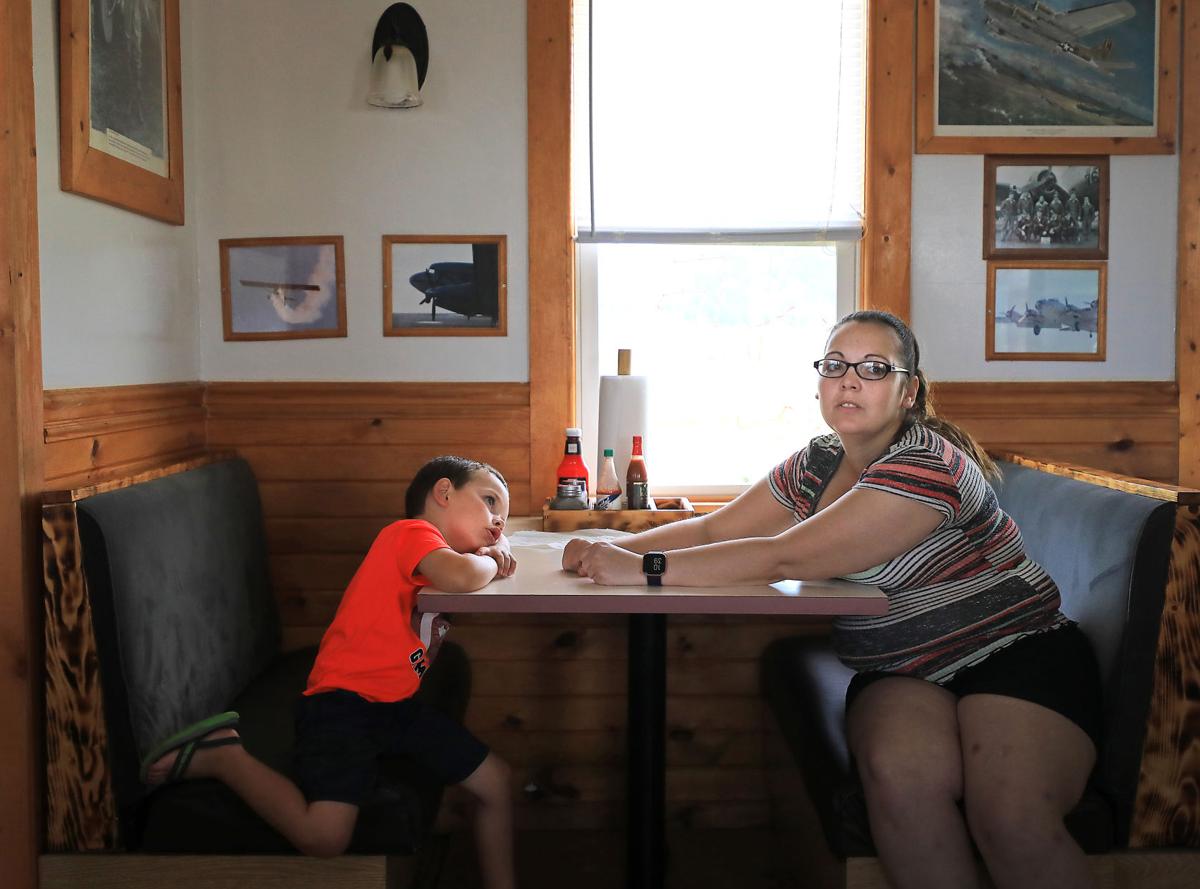 Jessica Hein, owner of the Piccadilly Lilly Airport Diner, shares a booth with Jackson Evans, 4, as she waits for customers at her small restaurant at the Tri-County Regional Airport in Lone Rock. Hein rents the space for $200 a month.

The Piccadilly Lilly Airport Diner at the Tri-County Regional Airport was closed for three months last fall after heavy rains resulted in flooding. 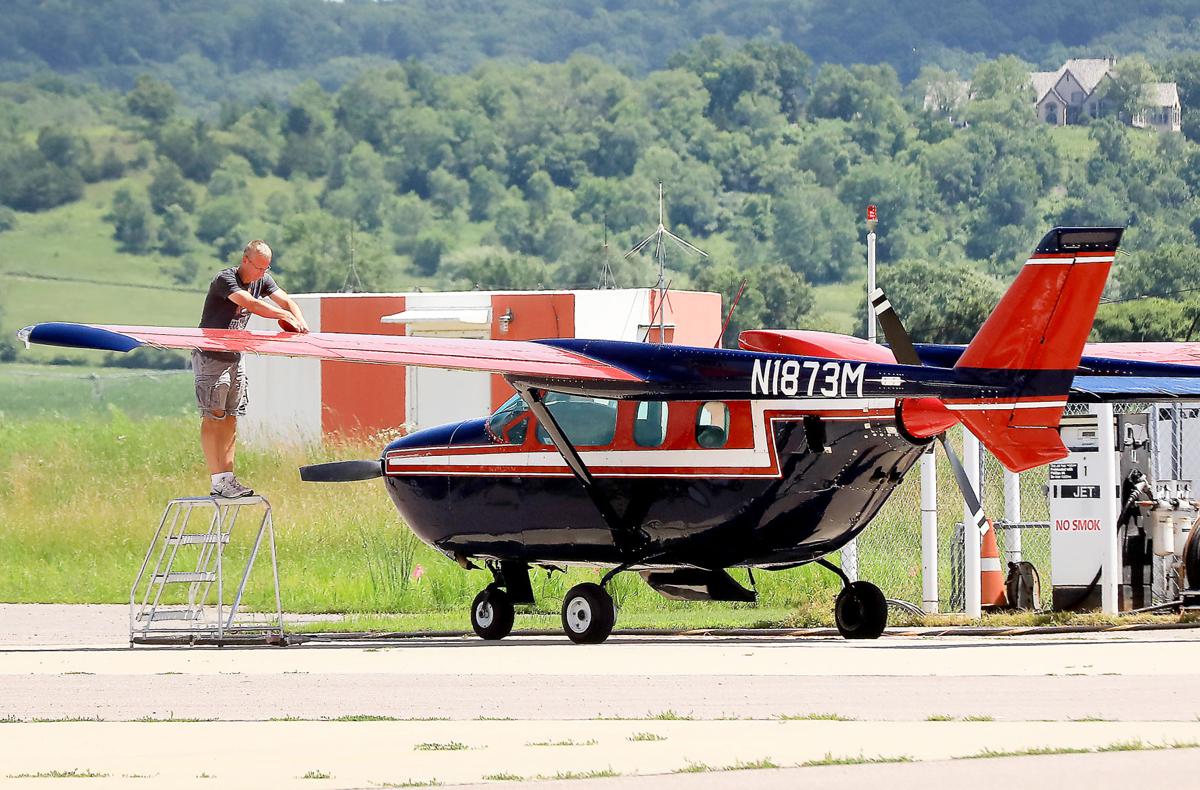 Ed Asmus, of Aurora, Illinois, fuels his 1973 Cessna 337G Skymaster during a stop last week at the Tri-County Regional Airport in Lone Rock. The airport typically sells 20,000 gallons of fuel a year. But as of last week, just 2,600 gallons had been sold this year. 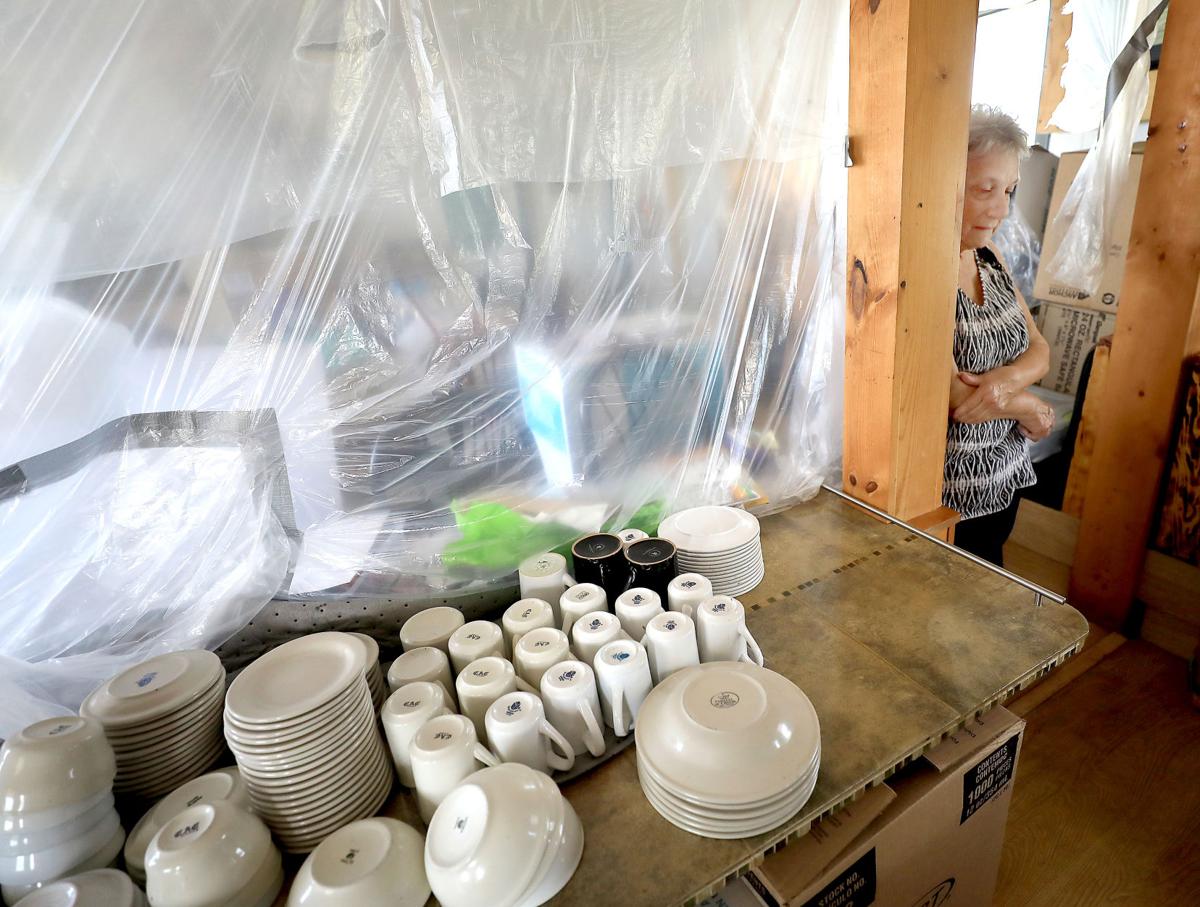 Plastic sheeting separates rooms at the Piccadilly Lilly Airport Diner. Mary Anne Evans, a friend of restaurant owner Jessica Hein, is hoping Hein can keep the restaurant afloat. "She's a tough lady. Anyone else would have given up," Evans said. "She's determined to make it work."

Marc Higgs, manager of the Tri-County Regional Airport in Lone Rock, looks over a taxiway that was partially submerged last week, several days after rains moved through the area. Flooding has become more common at the airport and officials are studying ways to reduce the negative effects of heavy rainfall.