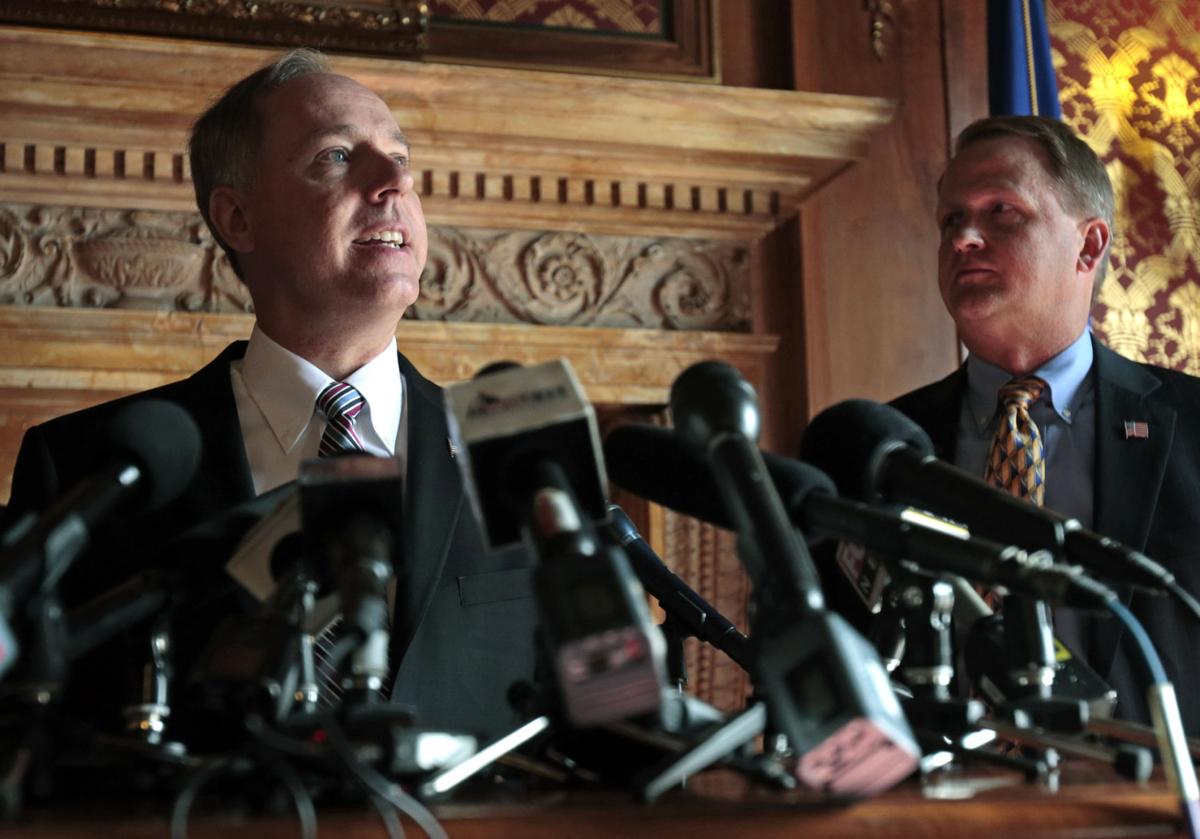 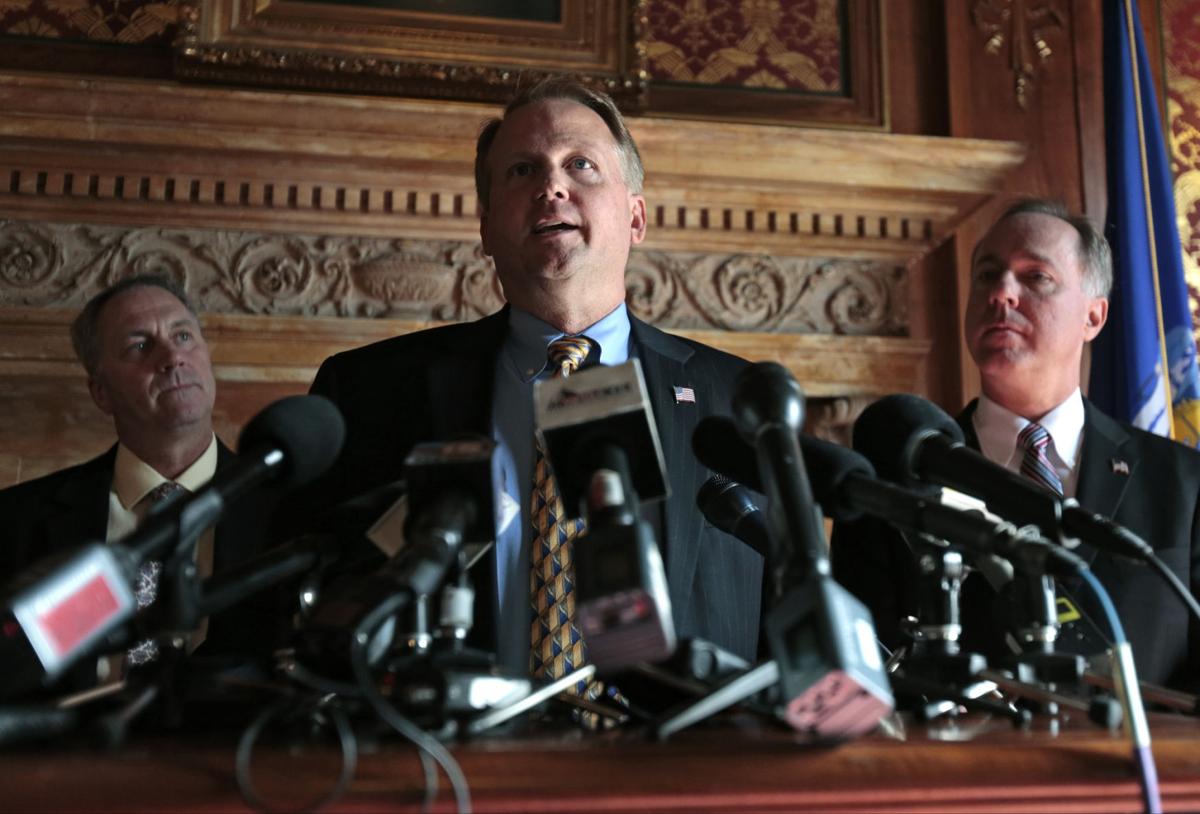 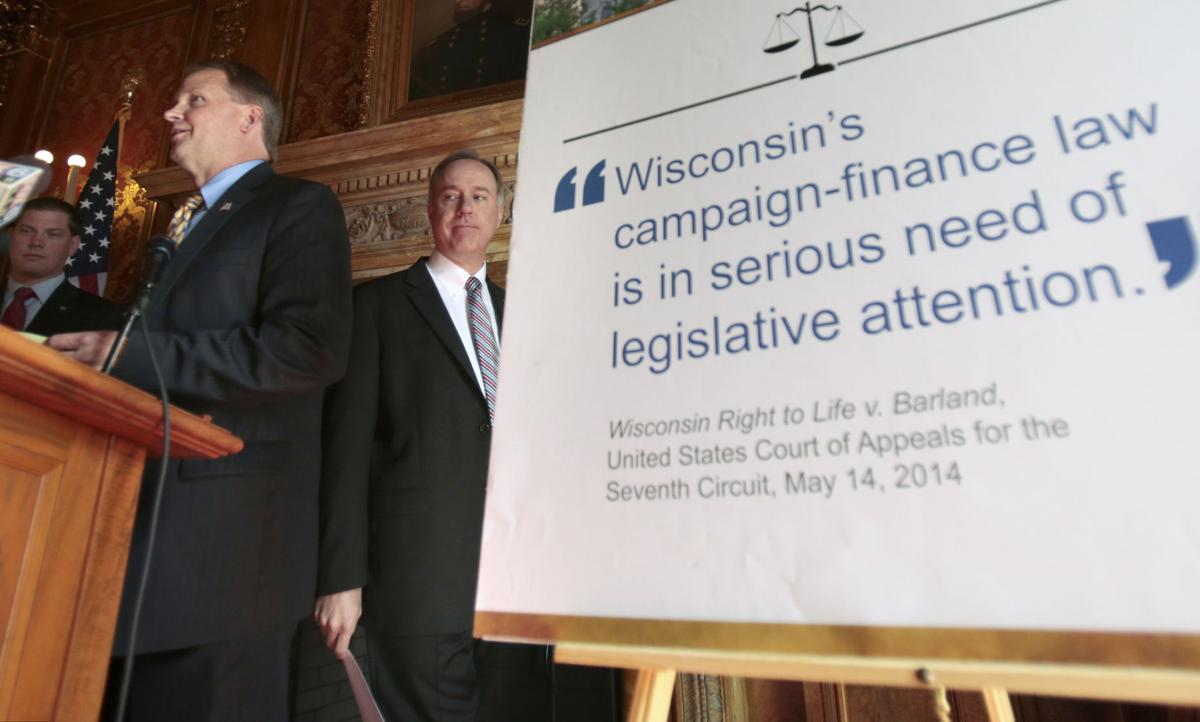 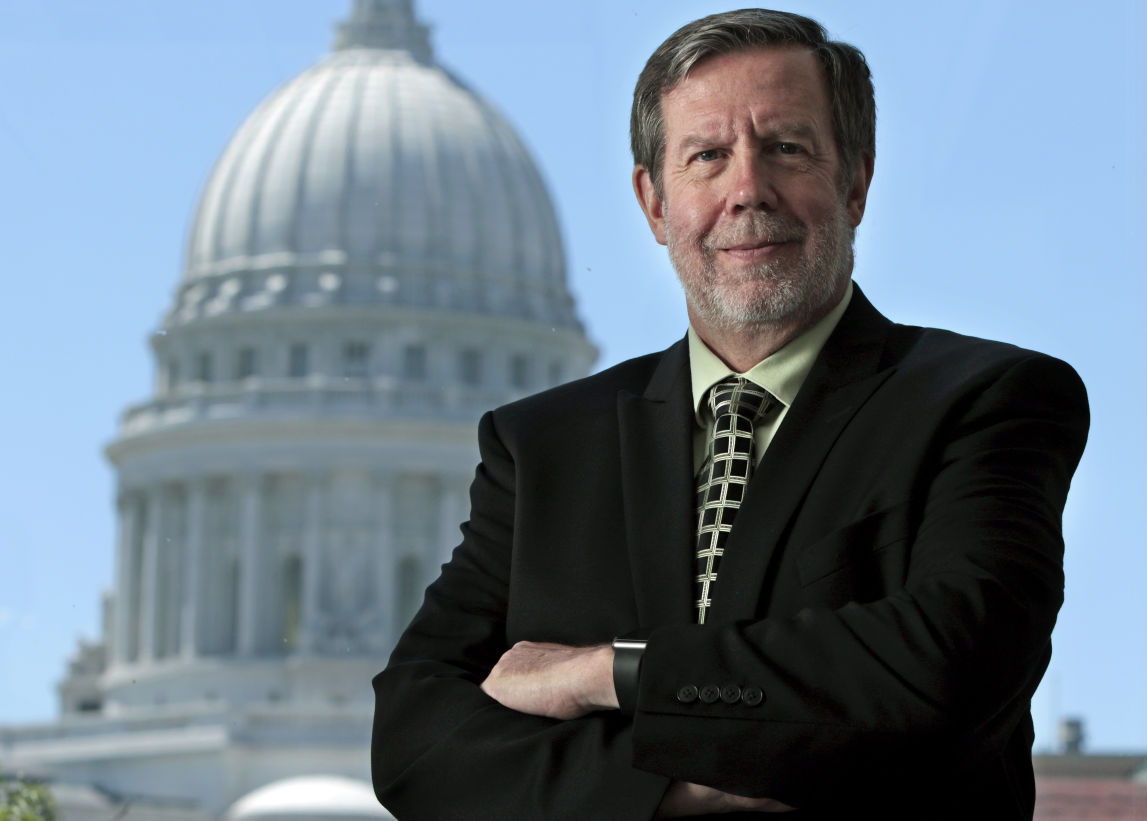 Kevin Kennedy, director of Wisconsin's Government Accountability Board, has an office that overlooks the state Capitol. Kennedy and the board have come under withering criticism as Republican lawmakers seek to overhaul the agency.

They also called for a sweeping revision of state campaign finance laws, one of the board’s areas of oversight.

The announcements signal an ambitious effort by GOP lawmakers to change how Wisconsin’s elections — and elected officials — are overseen.

Supporters said the GAB has overstepped its authority, and the new boards would be more publicly accountable. But critics of the bill said it would return Wisconsin to the model that predated the GAB, in which election and ethics laws proved difficult to enforce under partisan oversight.

Vos, R-Rochester, accused the board of a series of lapses that necessitate its dismantling, including what he called an “unconstitutional investigation” — likely a reference to the secret John Doe investigation into coordination between Gov. Scott Walker’s campaign and conservative groups during the 2012 recall.

Republicans made public a summary of the legislation but not the actual bill.

Knudson, R-Hudson — author the Government Accountability Board bill — said it would split the board into two commissions. One would oversee elections and the other would monitor ethics, campaign finance and lobbying. The GAB oversees all of those areas.

Both of the new commissions would be overseen by partisans appointed by legislative leaders or the governor. That’s a shift from the current board, made up of six nonpartisan former judges appointed by the governor and approved by the Senate. “We created (the GAB) with the best of intentions, but now it’s the time to make a change,” Vos said.

Rick Hasen, an elections expert at the University of California-Irvine School of Law, said the new commissions seem to be designed to deadlock, since it likely would be equally divided among partisan appointees. “In this hyper-polarized atmosphere, this looks to be a deliberate attempt to doom effective enforcement of Wisconsin election laws,” Hasen said.

GAB executive director Kevin Kennedy and GAB chairman Gerald Nichol, a retired judge, said after the Republican news conference the board has performed honorably. “What this (bill) is about is control,” Kennedy said.

The proposal would require administrators of the new commissions to be confirmed by the state Senate, which now is made up of 19 Republicans and 14 Democrats. It also ends the current practice of giving the board a blank check to investigate alleged violations of elections, ethics, lobbying or campaign finance laws.

Gov. Scott Walker has said he supports dismantling and replacing the GAB. His spokeswoman, Laurel Patrick, said in an email Wednesday that he “supports overall reform” of the board. She didn’t say what Walker thinks about Knudson’s proposal.

Under the proposal, both the elections and ethics boards would be made up of at least six members. Board members would be added to represent third parties if their gubernatorial candidate received at least 10 percent of the vote in the most recent election.

Democrats on Wednesday charged that Knudson’s bill would not guarantee the new commissions would be evenly split between Republicans and Democrats. The bill doesn’t clearly state if the governor must appoint one Republican and one Democrat to each commission.

Knudson, speaking late Wednesday, said that is his intent, and that the bill language will be changed to ensure it.

GAB supporters say the existing board is a national model for clean government, due to its nonpartisan model and how it allows the board to aggressively investigate alleged violations. The board was created in 2007 in the wake of the Wisconsin caucus scandal, in which top lawmakers of both parties were accused of illegally running political campaigns out of their legislative offices.

The 2007 vote to create the GAB was bipartisan and nearly unanimous. In contrast, the bill unveiled Wednesday appears to be supported only by Republicans, said Jay Heck, director of Common Cause Wisconsin.

GAB critics, nearly all of whom are Republicans, say the board has not acted impartially. Calls for the board to be dismantled increased after the state Supreme Court ruled this summer to end the John Doe investigation into Walker’s 2012 campaign. The GAB assisted with the inquiry.

Rick Esenberg, president of the Wisconsin Institute for Law and Liberty, said the GAB was created with the premise of removing politics from elections and campaign finance oversight. But Esenberg said recent charges of partisanship against GAB administrators in the John Doe investigation undermine that premise.

“It’s very difficult to conclude that it worked, given the revelations that are coming out about the John Doe,” Esenberg said.

The Government Accountability Board, which oversees elections, ethics, campaign finance and lobbying, would be split into two commissions under a Republican proposal unveiled Wednesday.

One commission would oversee elections and the other, ethics, campaign finance and lobbying.

Four members of the board would appointed by Republican and Democratic leaders in the Assembly and Senate. Two more members would be former local election clerks appointed by the governor, who selects them from a pool of candidates nominated by legislative leaders. Third parties would get an additional member on the board if their gubernatorial candidate got enough votes in the last election.

Four members would be appointed by GOP and Democratic leaders in the Assembly and Senate. Two more members would be appointed by the governor, who selects them from a pool of candidates nominated by legislative leaders. Third parties would get an additional member on the board if their gubernatorial candidate got enough votes in the last election.

Each commission would nominate a top administrator who, unlike the current GAB head, would be subject to a confirmation vote in the Senate.

The bill would end the current practice of giving the GAB open-ended funding to investigate alleged wrongdoing.

Several Dane County lawmakers initially co-sponsored bill, but withdrew support after getting push back from colleagues.

Lawmakers clash on GOP elections, campaign finance bills as they speed toward passage

The bill would split the GAB, into two boards: one overseeing elections, the other, ethics, campaign finance and lobbying.

A top IRS official who has since resigned said nonprofits coordinating with campaigns might be a criminal matter.

Ann Jacobs, founder of Jacobs Injury Law Firm in Milwaukee, has a background in election law and has contributed to Democratic campaigns.

Critics decry a plan by Assembly Republicans to use the Federal Election Commission as a model for overhauling Wisconsin's elections board.

The GAB, created eight years ago as an independent overseer of elected officials, may be headed for extinction.

Editor's note: This article appeared in the Wisconsin State Journal on Jan. 30, 2007, the same day lawmakers adopted a bill creating the Government Accountability Board.

Kevin Kennedy, director of Wisconsin's Government Accountability Board, has an office that overlooks the state Capitol. Kennedy and the board have come under withering criticism as Republican lawmakers seek to overhaul the agency. 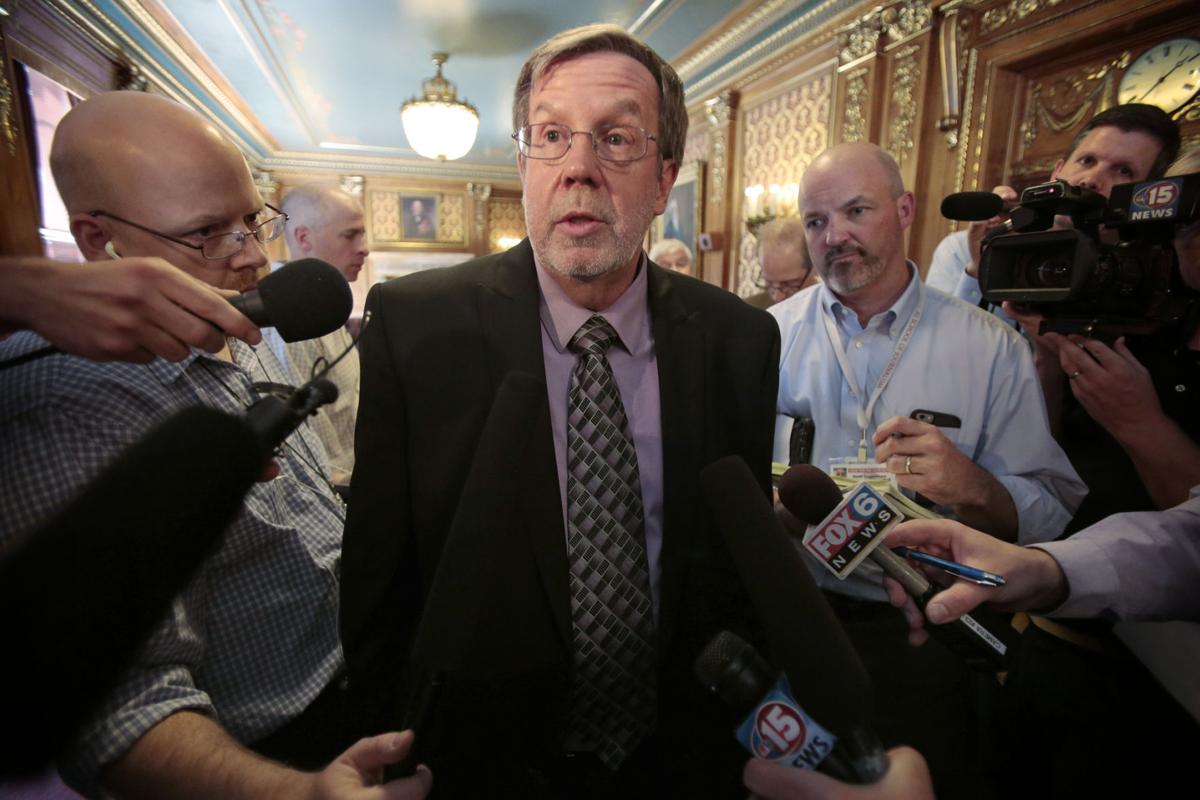 Government Accountability Board executive director Kevin Kennedy is retiring on June 29, the day before GAB is dissolved.