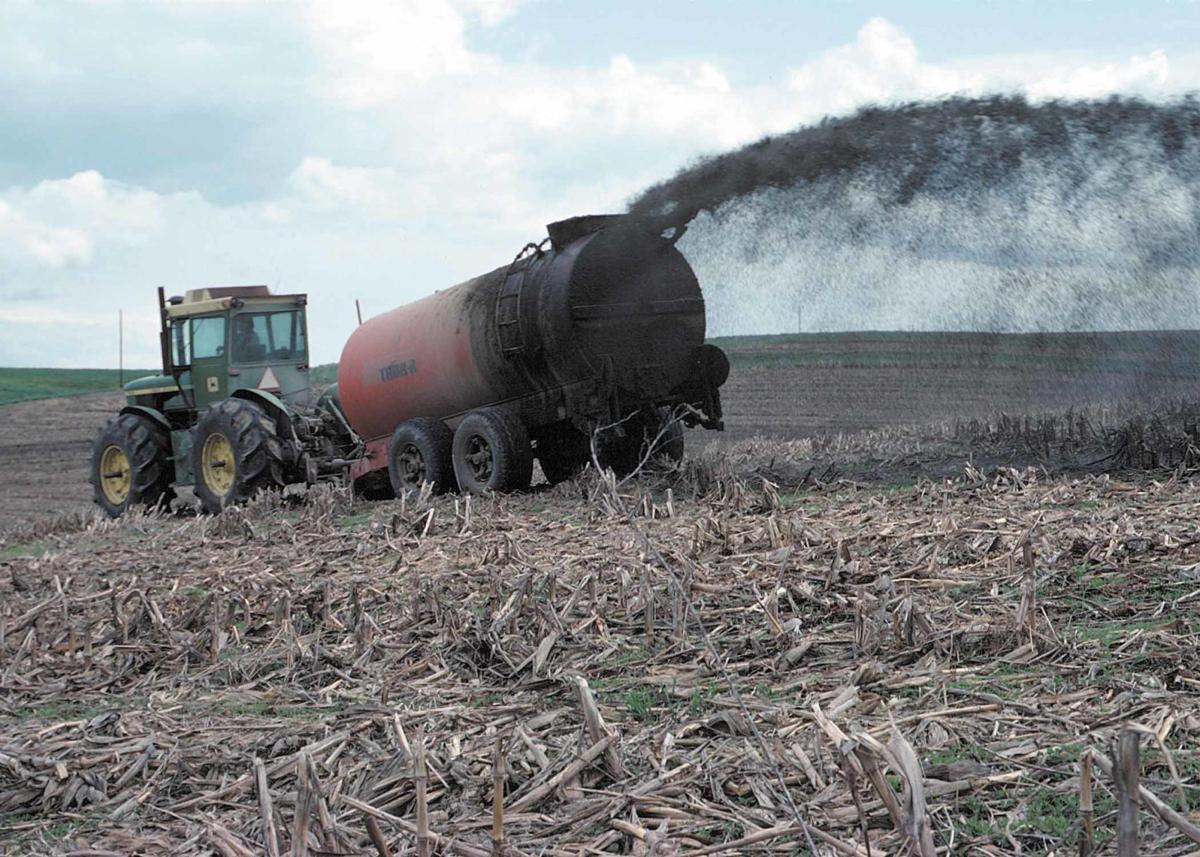 Liquid manure is applied to cropland in this undated file photo. A new study by the Environmental Working Group found 303 municipal water supplies in Wisconsin were contaminated with nitrate, a pollutant tied to manure and fertilizers. 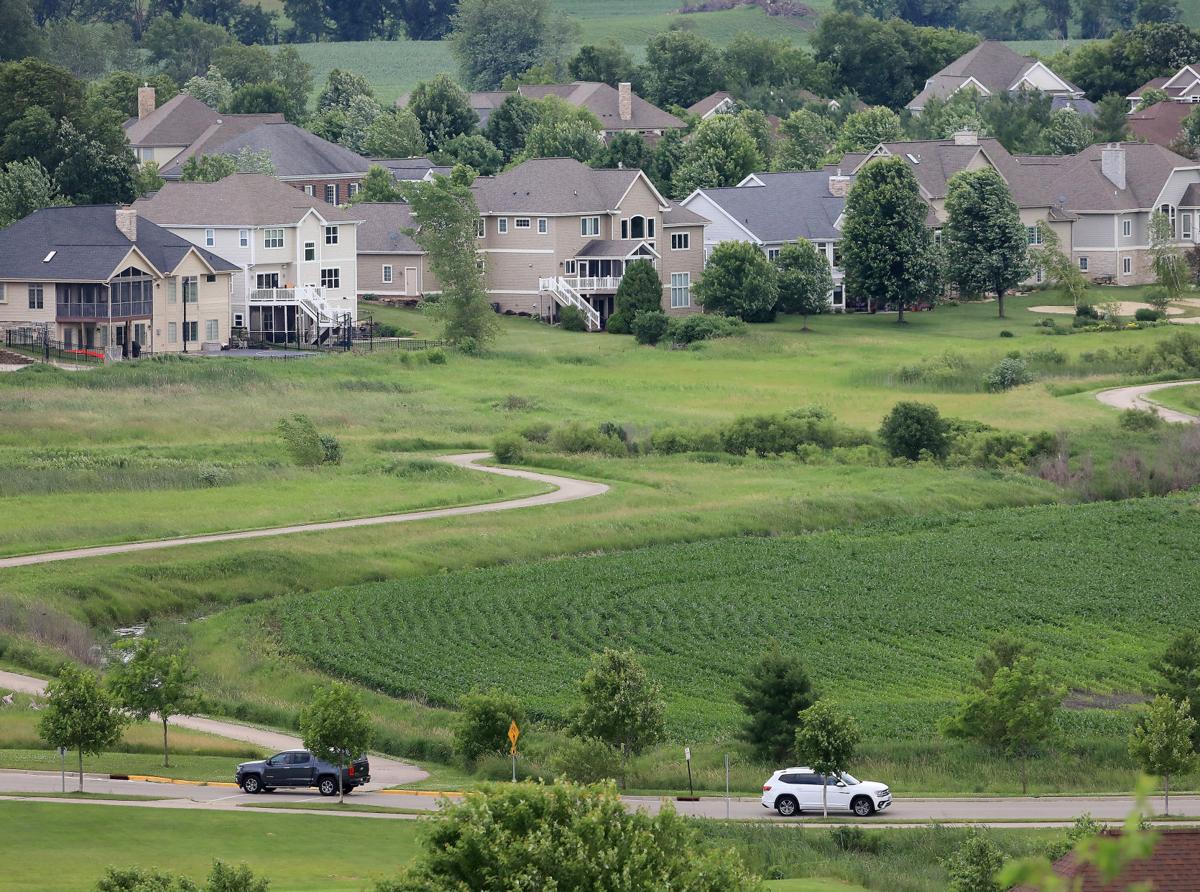 Homes and farmland share the landscape on the south west side of Waunakee, one of several Dane County cities where pollutants linked to farm runoff have been rising in municipal drinking water. 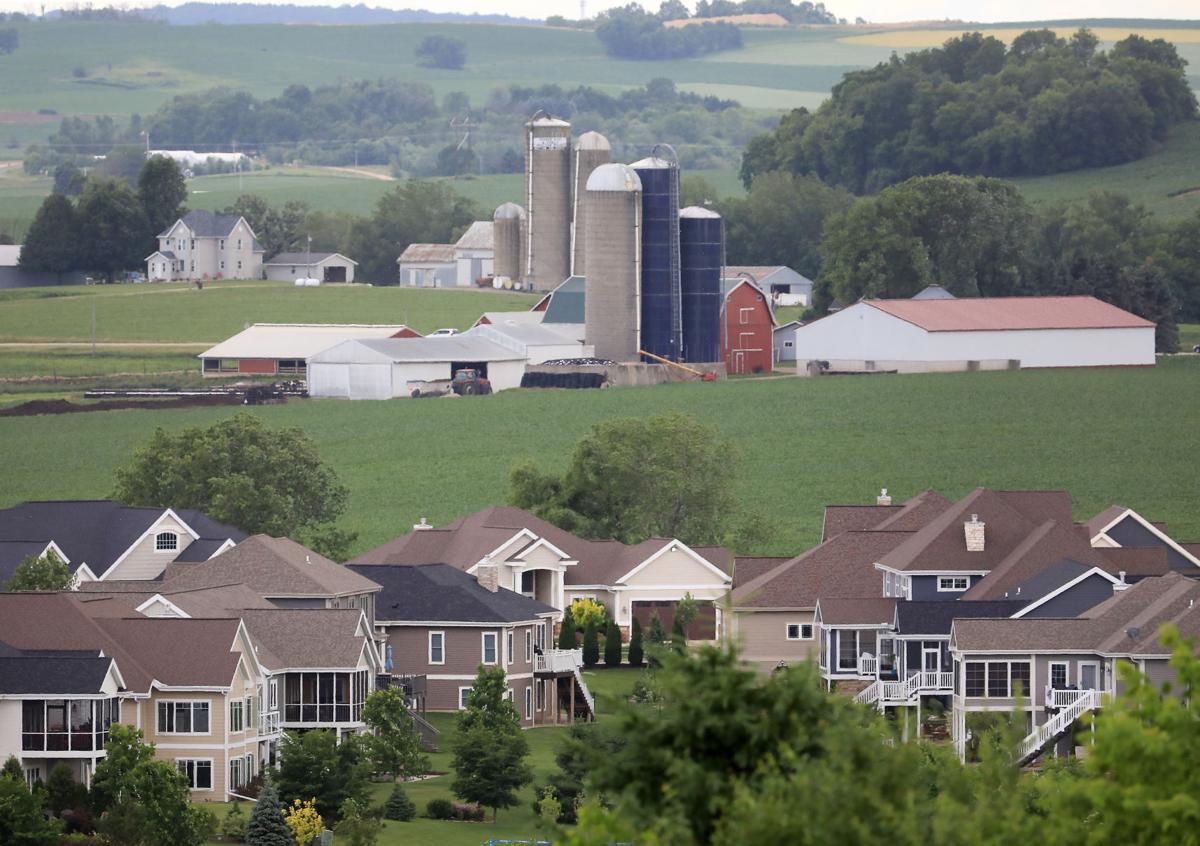 The DNR is working on new rules to address elevated nitrate levels in drinking water in certain parts of the state.

Municipal water systems providing tap water for more than 1 million Wisconsin residents have been contaminated with nitrate at some point since 2003, according to a new report from an environmental watchdog group.

What’s more, the problem has gotten worse in the majority of places, including several Madison-area suburbs.

Nitrate, which is associated with multiple ailments and can be fatal to infants, is Wisconsin’s most widespread groundwater contaminant, according to a 2018 legislative report from the state’s Groundwater Coordinating Council.

While nitrate has long plagued rural residents who rely on private wells, a review of testing data by the Environmental Working Group found that 303 of the state’s municipal drinking water systems also had elevated levels between 2003 and 2017.

At more than half of those systems — including in suburban communities such as Sun Prairie, Waunakee and Cross Plains — nitrate levels increased over that time frame.

“We have seen more research showing there’s health risks at levels lower than 10 (mg/L),” Schechinger said, noting studies that have linked nitrate to colon, rectal and bladder cancer. “People forget about it and don’t really worry if they don’t have a baby. It’s not just about blue baby syndrome.”

The findings released Wednesday are based on data obtained under open records law that found nitrate contamination in more than 4,000 public systems in states with the most widespread contamination — California, Illinois, Iowa, Kansas, Maryland, Nebraska, Oklahoma, Pennsylvania, Texas and Wisconsin — that supply tap water for more than 45 million people.

Each of the systems was contaminated at least once in those 15 years with nitrate at or above 3 milligrams per liter, the Environmental Protection Agency’s threshold for human-caused contamination.

The EPA’s clean drinking water standard for nitrate is 10 mg/L, though EWG says even 5 mg/L or less can be harmful to human health.

Of the Wisconsin water systems that tested for nitrate, 30% had at least one elevated reading, and 18% had at least one reading above 5 mg/L, according to EWG. Among the systems with contamination, EWG found 64 had statistically significant increases over time.

About two-thirds of the systems where the problem is getting worse were located in rural areas, and 83% serve communities of fewer than 3,300 people.

The Dane County communities of Cross Plains, DeForest, Lodi, McFarland, Sun Prairie and Waunakee were among the systems where nitrate contamination grew worse over time.

All but McFarland had at least one reading above 5 mg/l in 2017, but Sun Prairie and DeForest were the only ones to exceed the EPA’s safe drinking water standards.

Among the Wisconsin systems with rising levels, nitrate levels increased 46%.

“That was a pretty huge jump compared to the other states,” Schechinger said.

Farm fertilizer and manure account for about 90% of the nitrate in groundwater, according to the Groundwater Coordinating Council, though faulty septic systems can also contribute.

That means the problem is beyond the control of most municipal water systems.

“We’re watching it,” said Jerry Gray, director of public facilities for the village of Cross Plains.

Gray said the village has encouraged residents to limit their use of lawn fertilizer, although the system’s wells draw from groundwater plumes that flow under farmland outside the village boundaries.

“Within the village it’s all we’ve got control of,” Gray said. “We could probably get control if we had a bottomless checkbook, but that’s not feasible either.”

“Some of our wells are closer to the boundary,” he said. “We can only control what’s in our jurisdiction.”

While it is possible to remove nitrate from drinking water, it is also expensive, putting treatment out of reach for many communities.

Herlitzka notes that Waunakee’s nitrate level has dropped since 2017, though he doesn’t know exactly why.

“We’re thankful it’s trending in the right direction,” he said.

Gray said the village of Cross Plains is looking at building a new well — at a cost of about $2 million — to serve growing demand, which it plans to site further away from agricultural land in hopes of drawing cleaner water.

But Gray acknowledges there are no guarantees.

Schechinger said the problem stems from increasing amounts of manure and fertilizer being applied to bare farm fields that are exposed to heavier rains and snowfalls, which can carry more nitrates into ground and surface water.

“We really focus on prevention,” Schechinger said. “That’s what we think is the best way to go — trying to stop nitrate from running off farm fields or seeping into groundwater.”

At the direction of Gov. Tony Evers, the Department of Natural Resources is in the process of crafting new restrictions on manure and fertilizer use in certain parts of the state in an effort to curb nitrate pollution.

Current rules contain statewide regulations — known as “performance standards” — on the use of manure and fertilizer designed to meet surface and groundwater standards.

The agency is now drafting targeted standards that would go above and beyond the statewide regulations in sensitive areas where thin topsoil layers or porous bedrock leave groundwater vulnerable to contamination.

Despite widespread public support, the proposed rules are opposed by the state’s largest agriculture industry groups, including the Dairy Business Association and Wisconsin Manufacturers and Commerce, who say the DNR has not identified any impaired waters and hasn’t demonstrated that current standards have been implemented.

The new rules, which will be subject to legislative approval, are not expected to be completed until 2022.

Covia, which owns permitted mines and plants in Columbia, Dunn, Monroe, Pierce and Waupaca counties, has filed for Chapter 11 bankruptcy, saying a restructuring plan negotiated with lenders will eliminate more than $1 billion in fixed costs.

Studies are underway to address a rising water table, while the Picadilly Lilly Airport Diner struggles to survive from the double punch.

Liquid manure is applied to cropland in this undated file photo. A new study by the Environmental Working Group found 303 municipal water supplies in Wisconsin were contaminated with nitrate, a pollutant tied to manure and fertilizers.

Homes and farmland share the landscape on the south west side of Waunakee, one of several Dane County cities where pollutants linked to farm runoff have been rising in municipal drinking water.

The DNR is working on new rules to address elevated nitrate levels in drinking water in certain parts of the state.