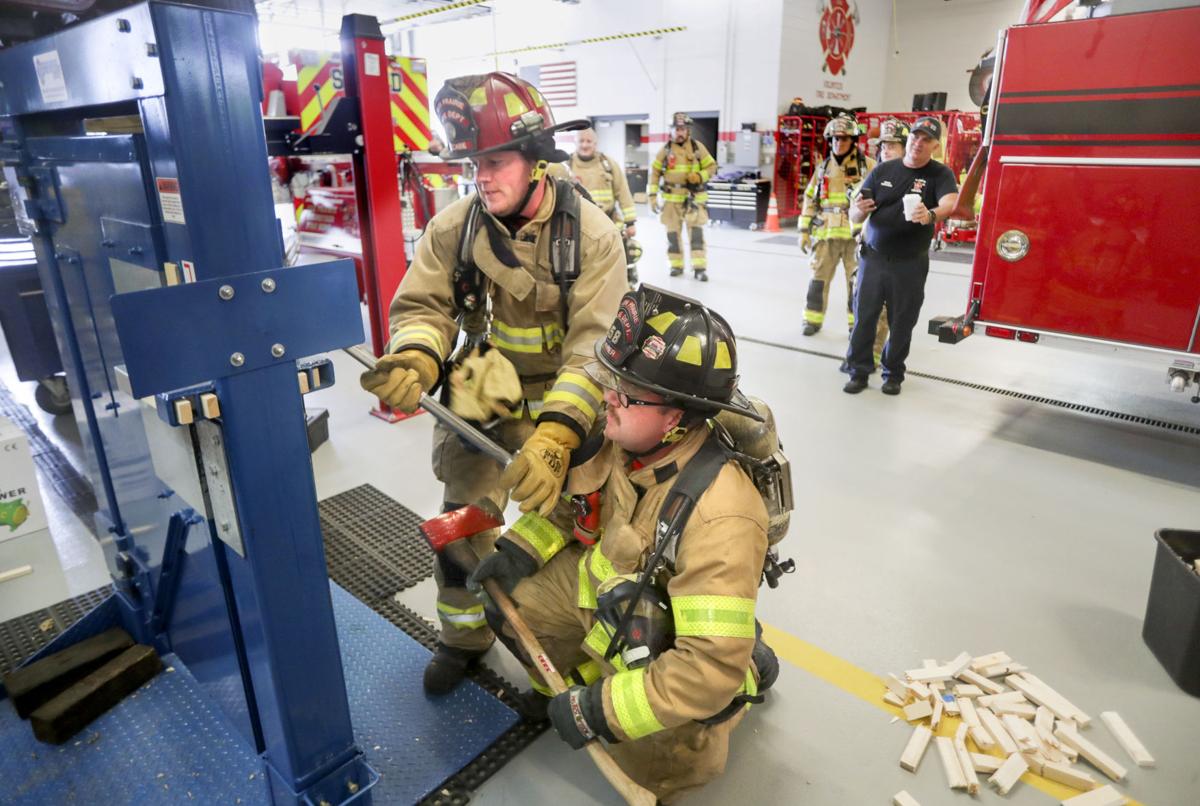 After spending nearly two weeks working at the site of a massive gas-leak explosion, Sun Prairie Fire and Rescue personnel including Capt. Pat McCabe, left, and Scott Barker were back in the station on North Bristol Street doing breaching drills as Fire Chief Christopher Garrison timed them. 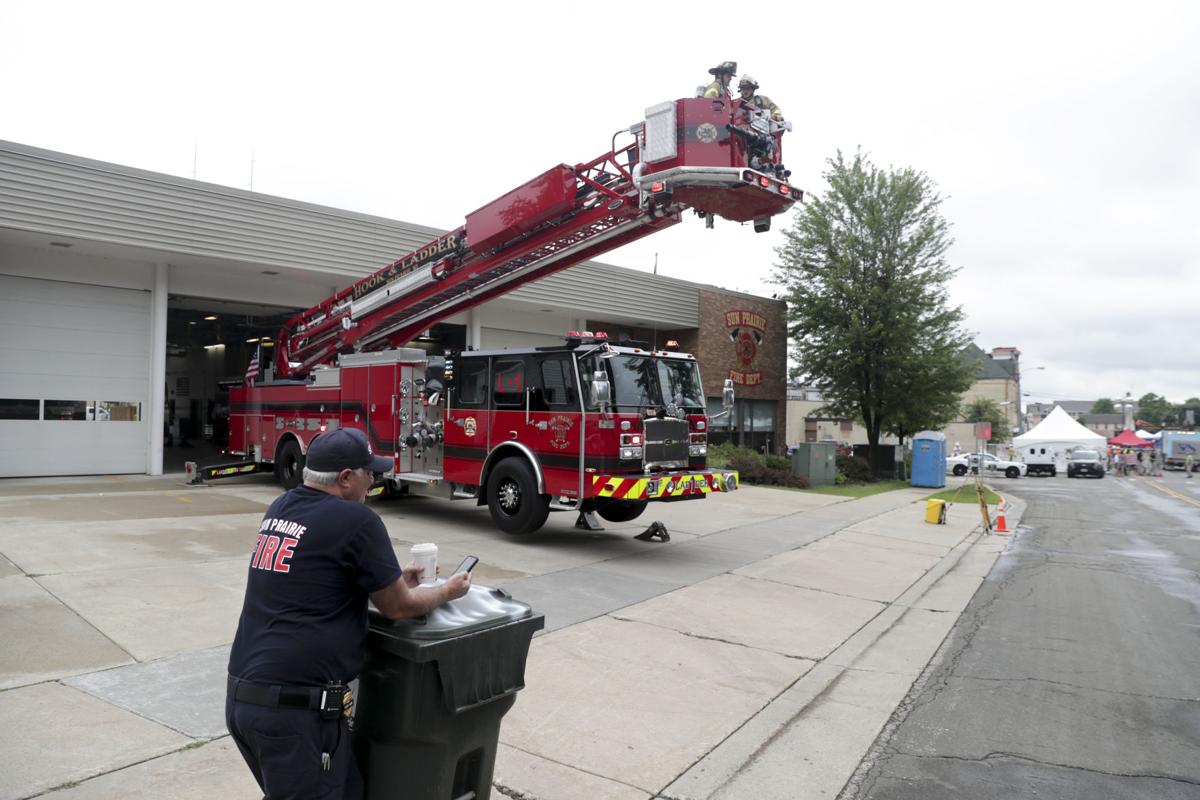 Sun Prairie Fire and Rescue Chief Chris Garrison keeps track of how fast it takes to get the department's new ladder truck up and ready at the North Bristol Street station. 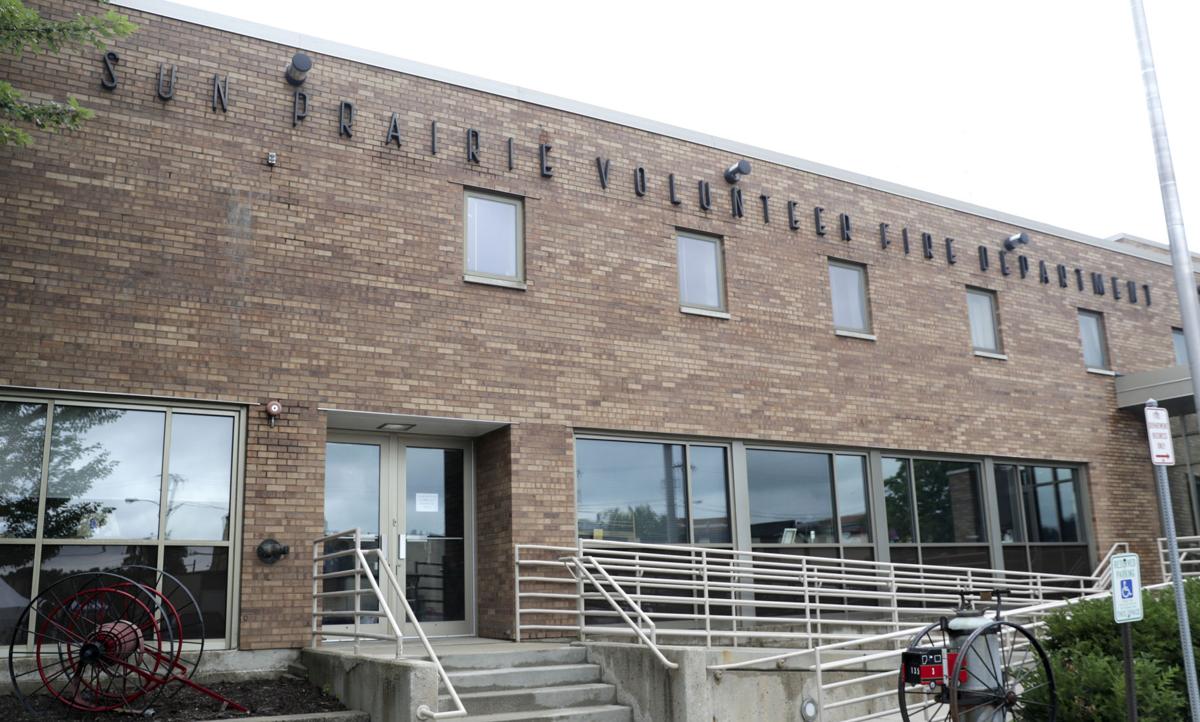 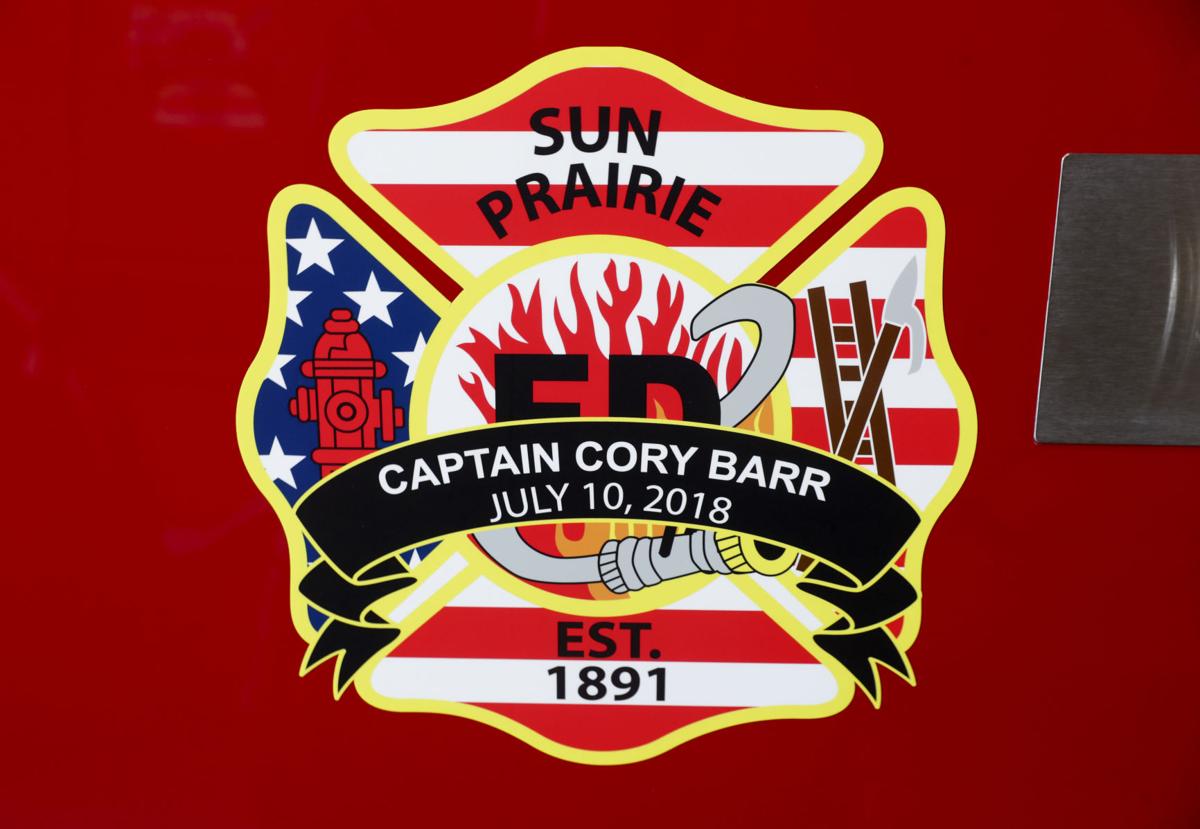 A new seal on the Sun Prairie Fire and Rescue fire trucks honors Capt. Cory Barr, who died in the line of duty during a downtown explosion on July 10. 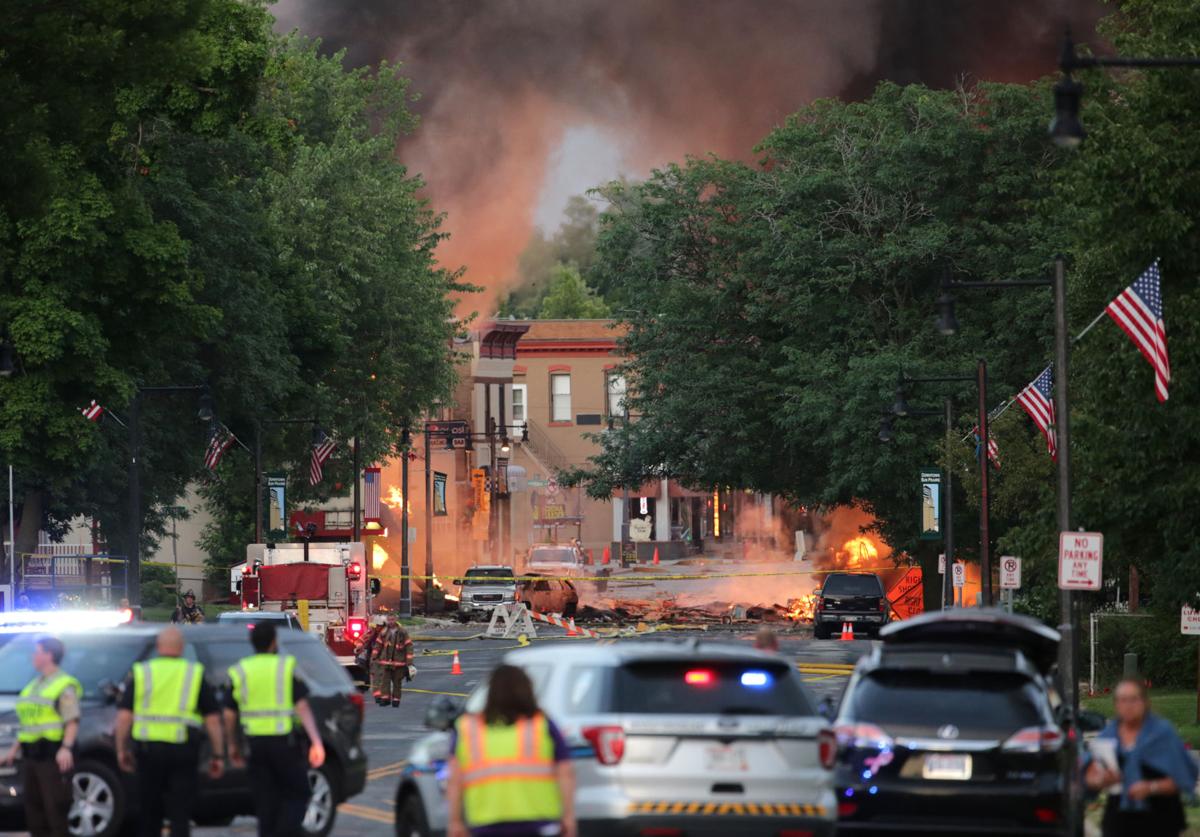 Sun Prairie's largely volunteer fire department is credited with saving an untold number of lives after a contractor hit a gas main on July 10. About 40 minutes later, a massive explosion destroyed five buildings and damaged many more.

The official name of Sun Prairie’s fire department was changed to Sun Prairie Fire and Rescue in March, but there are no plans to remove the bold letters spelling out “Sun Prairie Volunteer Fire Department” on the side of the North Bristol Street fire station.

The way Fire Chief Christopher Garrison sees it, the old name identifies the heart and soul of a department that helped evacuate more than 100 people minutes before a massive gas-leak explosion downtown leveled several buildings located just yards from the fire station on July 10.

“What I’m telling you is if my soldiers didn’t act the way they did, there would be a lot of carnage out there, and we prevented a lot,” he said.

One of the department’s volunteers, Capt. Cory Barr, 34, was killed in the blast. That has led some to ask why Dane County’s second-largest city still hasn’t switched to a full-time fire department. That has been the trend for cities larger and smaller than Sun Prairie despite the fact that communities in this country dependent on volunteer firefighters save a combined $46.9 billion per year, the National Fire Protection Association says.

Sun Prairie Fire and Rescue has about 70 members and pays full-time wages to 13 of them, Garrison said.

Menomonee Falls (38,117 residents) is the only community in Wisconsin bigger than Sun Prairie (33,828) that has a fire department made up of mostly part-time — or volunteer — personnel, according to data from firecares.org. Just four other cities that are among the 39 in the state with populations over 20,000 have similarly staffed fire departments, the data shows.

But Sun Prairie Fire and Rescue’s path forward will stay rooted with its volunteers if Garrison has anything to do with it. He said the department’s name was changed during the process of changing its nonprofit organization designation that makes it easier for people to write off donations.

Blessed with high energy and a positive nature, Garrison, 54, smiled as he predicted that “we will run this as a volunteer organization till the volunteers can’t do it anymore and I don’t see that in the near future.”

Officially, Sun Prairie Fire and Rescue is designated as a “combination” department by the National Fire Protection Association because it doesn’t employ a large majority of either part-time or full-time personnel. But Garrison knows that some believe that its dependence on volunteers automatically means it can’t measure up to full-time departments.

As a former volunteer (part-time) and career (or full-time) firefighter, Garrison says that premise is false.

Data shows that Sun Prairie Fire and Rescue is more than keeping up with the city’s growing population by going to more calls, adding improved services like the Emergency Medical Responder initiative and responding quicker than ever despite covering a huge area of more than 90 square miles. Besides the city of Sun Prairie, it also covers calls to the towns of Burke, Bristol and Sun Prairie.

A look at its equipment inventory shows an influx of new, state-of-the-art equipment like a ladder truck, a tender (water-holding) truck and a command vehicle that create a safer environment for personnel.

The department also requires its personnel to receive the same level of training and education as full-time personnel, and Garrison is among those leading efforts to make it a statewide requirement for all fire departments.

Within two years, its fire station on West Main Street on the west side of Highway 151 will become operational 24 hours a day and match the downtown station. Department personnel also have been very active educating the community about fire safety and seeking new volunteers.

Garrison believes nothing defines Sun Prairie Fire and Rescue better than the performance of its volunteers before and after the explosion on July 10. With the rubble visible from his office window, Garrison said, “Some of them were out there for 12, 14, 20 hours. They weren’t getting paid. God bless it, you know, I’m very proud of this organization.”

Signs expressing support for Sun Prairie’s “volunteer” fire department have popped up on lawns around Sun Prairie since the explosion. Mayor Paul Esser, who is among the department’s strongest supporters, said they are the same signs that that were used by residents when the city took a long look at moving to full-time personnel a few years ago.

“That created a lot of unsettleness, a lot of angst,” Esser said. “I’ve been mayor for three years and I’ve said it a zillion times, we will never, while I’m mayor, have a full-time fire department. It’s not necessary.”

But it was necessary to prod the department to hire full-time personnel and improve other aspects of the department so it could respond properly to the growing number of problems, Esser said. That’s where the hiring of Garrison, who was the deputy chief at the Lake Forest Fire Department in Illinois, has been a big key. He was named the Wisconsin State Fire Inspectors Association’s Fire Chief of the Year in 2017 for his fire and safety education initiatives and his positive influences on his personnel and the community.

“He has expectations and doesn’t deviate from that,” Esser said.

Plus, the volunteers have picked up on Garrison’s enthusiasm and have been outstanding at going out into the community raising money and recruiting new volunteers, according to Esser. That has kept the department from suffering from staff problems that have plagued many mostly volunteer departments.

Sun Prairie uses full-time personnel to meet staffing requirements at both the North Bristol Street station and its West Main Street station for daytime shifts. The North Bristol Street station is operational 24/7 and uses volunteers and part-time personnel to staff the nighttime shifts. The city pays four part-timers $130 for a weekday night shift and $150 for a weekend night shift, and volunteers fill out the rest of the shifts for no pay. “That’s a very important element of what they are doing here,” Esser said.

It’s no different in Fitchburg, which also is staffed mostly by part-time personnel that are trained and educated at the same levels as Sun Prairie Fire and Rescue. “I do believe that the city of Fitchburg and Sun Prairie are training the fire service,” said Fitchburg Fire Chief Joe Pulvermacher.

“A good number of (full-time) departments out there do not allow you to apply until you have completed your education requirements and have some degree of experience,” he said. “Well, where are they going to get that experience? So a lot of what we’re doing is not only addressing our needs locally, but we are also addressing the needs of the fire service.”

Quality departments like Fitchburg and Sun Prairie also teach young firefighters about the culture that is such an important aspect of the job, according to Pulvermacher.

“We have a generation of firefighters coming up that I think are very trainable. You generally hire, though, for character and not for skills because you can teach skills, you can’t teach character,” he said. “One of the things that we’re looking for is people who know exactly what it feels like to be in that family-type environment, who can appreciate the value of teamwork and working beyond the individual efforts and doing what’s right for everybody.”

That’s one reason why Barr’s death is hitting the Sun Prairie firefighters so hard.

“The reason why his death hurts that department so much is because of the fact that he was loved by his brothers, his sisters,” Pulvermacher said. “This sounds bad, but I hope that doesn’t go away because it just means that he had a significant impact on that department. And his impression will be felt for a very long time.”

Garrison believes Barr is the model for the Sun Prairie firefighter — volunteer or otherwise — and that may never change.

“There are great full-time fire departments out there, but we don’t have to be there right now,” he said. “So why can’t we keep on doing the things that we’re doing? We are building this fire department now in Cory’s memory, but we were building anyways. We were already moving to the pinnacle.”

More in Sun Prairie explosion: Read the original reports about the blast that killed firefighter, damaged downtown (17 of 38)

Shelter officials say the puppies were about three weeks old and hungry because their mother had stopped producing milk.

The restaurant agreed to voluntarily close for deep cleaning, discarding any potentially contaminated food and pest control efforts; it has since reopened.

Throwback Thursday: A crush, a murder a hanging in Houston County

This story initially appeared, March 9, 1923, in the Winona Republican-Herald, a predecessor of the Winona Daily News.

Assembly Republicans unveiled the plan Friday, which also includes a nearly $45 million cut to personal property taxes paid by businesses and about $100 million toward paying down state debt. The plan does not call for any additional spending on education, which Democratic Gov. Tony Evers called for last week.

A Juneau County snow plow operator was critically injured in a crash with a train on Thursday afternoon, the State Patrol reported.

MADISON, Wis. (AP) — A Wisconsin political activist who admitted to trying to buy a lethal dose of a radioactive substance online was sentence…

After spending nearly two weeks working at the site of a massive gas-leak explosion, Sun Prairie Fire and Rescue personnel including Capt. Pat McCabe, left, and Scott Barker were back in the station on North Bristol Street doing breaching drills as Fire Chief Christopher Garrison timed them.

Sun Prairie Fire and Rescue Chief Chris Garrison keeps track of how fast it takes to get the department's new ladder truck up and ready at the North Bristol Street station.

A new seal on the Sun Prairie Fire and Rescue fire trucks honors Capt. Cory Barr, who died in the line of duty during a downtown explosion on July 10.

Sun Prairie's largely volunteer fire department is credited with saving an untold number of lives after a contractor hit a gas main on July 10. About 40 minutes later, a massive explosion destroyed five buildings and damaged many more.