EDGERTON — This is where reminders of this city’s tobacco past are preserved with faded lettering on exterior brick walls.

The T.W. Dickinson & Sons building stands out on the corner of West Fulton Street and Highway 51. A few hundred feet away, a warehouse towers above South Main Street with wording that eulogizes the Wisconsin Leaf Division. Other former tobacco warehouses in this city of 5,620 souls have been converted to apartments, but the majority have vanished along with most of the area’s tobacco fields.

A 79-year-old mural in the Edgerton post office, however, offers up in vibrant color the story of tobacco for all to see.

“We’ve had people come in and take pictures of it, but a lot of people probably don’t even notice it,” said Jon Buchholz, Edgerton’s postmaster for the past six years. “It shows Edgerton’s farming culture. Family and farming. That’s what it’s all about.”

Painted by Vladimir Rousseff, who emigrated from Bulgaria in 1911 and studied at the Art Institute of Chicago, the 13-foot-long, 4-foot-high mural zeros in on the tobacco harvest and the celebration of its bounty that for generations was a way of life in this northeastern corner of Rock County.

The mural is one of 35 works of art commissioned for post offices across Wisconsin in the 1930s and early 1940s as part of a federal New Deal program to beautify new post offices, provide work for struggling artists and share their creations with the masses. That work is now the subject of a book written by an Illinois man who has ventured to each of the post offices, taken photographs and traveled to Washington, D.C., where he dove into the National Archives to learn more about the projects, the artwork and the artists.

But for computer technology pro turned full-time author David Gates Jr., his 165-page book, “Wisconsin Post Office Murals,” and a 43-page companion guide book, also provided a way to check out historic buildings, eat in local diners and walk the main streets of Wisconsin. He’s now working on a book about post office art in Tennessee, scheduled to be published by the end of the year. His ultimate plan is to chronicle each of the more than 1,100 pieces of art that adorn post offices in all 50 states.

“It’s really been great to actually have that additional time to devote to converting this so-called hobby into a full-fledged business,” Gates said during a phone interview last week from his home in Crystal Lake. “Its something I’ve been passionate about for a long time and something I really love. These small post offices are quite unique in some cases.”

The post office murals and other artworks were not part of the Works Progress Administration but of the Section of Fine Arts, established in 1934 and administered by the Procurement Division of the U.S. Treasury Department, according to the Smithsonian Institution. About 1% — typically $400 to $600 — of a building’s cost was reserved for public art, with the artists selected through anonymous competitions. In many cases the decision was left with the postmaster, maybe a member of the architectural firm and a prominent citizen. Once chosen, the artists were provided guidelines and asked to submit sketches for approval before actually creating the finished piece.

“Post offices were located in virtually every community and available for viewing by all postal patrons, which made post office murals a truly democratic art form,” according to a 1997 Smithsonian article. “Artists were constantly reminded that the communities were their patron and they went to great lengths to satisfy the desires of everyone involved in the project in order to save their commissions.”

Gates took his first picture of a post office in 2003 in Athelstane as a reminder of the small town while in northeastern Wisconsin for a whitewater rafting trip on the Peshtigo River, but at the time was unaware of any post office artwork. He discovered his first post office mural in 2007 in Irwin, Tennessee, while hiking the Appalachian Trail and became enthralled with the art. He began researching, discovered the New Deal murals and began to write about post offices on his blog, Post Office Freak. He changed the name to Post Office Fans in 2017 when he began to get more serious about book publishing.

The website provides background on the murals and chronicles his trip to each. There’s also a map with easy-to-navigate links to each of the 35 locations. Gates’ book includes more details about the mural, the artists, the history of each community and vibrant photos.

“The history is absolutely amazing,” said Gates, 35. “There’s lots of people that really appreciate these things.”

The Edgerton post office was built in 1939 for $58,775 and features hardwood floors behind the front counter, while the lobby has its original woodwork and marble floors. Gates visited the post office on a Sunday years ago only to find the lobby closed. He returned in 2013 when he was able to view in person the mural, installed in 1941, above Buchholz’s office door.

In Park Falls, a mural pays homage to the logging industry and the Flambeau River, while in Columbus a mural depicts farming and the settlement of the community in 1840. The Ricard Brooks mural in Richland Center is titled “Decorative Interpretation of Unification of America through the Post” and was installed in 1937. In Mayville, the mural by Peter Roiter, who grew up in northern Wisconsin, is of a fall harvest of hay using horse-drawn wagons.

Santos Zingale painted a mural in his Milwaukee studio in 1937 and 1938 and then had it shipped to Sturgeon Bay, where it hangs in the post office and tells the story of commercial fishing. He later was commissioned by the Wisconsin Art Project to create a 40-foot mural based on the founding of Racine for the city’s Mitchell High School.

In Stoughton, a mural about airmail covers part of a wall of the post office nestled in the city’s downtown across the street from Fosdal Home Bakery.

“I think they did (an airmail theme) because we were close enough to Madison and they flew a lot of mail in,” said Dennis Jones, who has worked at the post office for 21 years and has a copy of Gates’ book. “It’s pretty interesting. We try to point it out to people.”

The post office was constructed in 1938 and 1939 and the mural painted in 1940 by Edmund Lewandowski, who studied at the Layton School of Art in Milwaukee. Like Edgerton’s mural, it’s located above the door to the postmaster’s office.

“It’s the children that notice it,” said Beckie Endrizzi, who was working behind the front counter with Jones last week. “The adults just come in and they’re all business, but the kids point to it.”

But not all of the artwork consists of murals. In Prairie du Chien, there are plaster reliefs by Jefferson E. Greer, while in Fond du Lac, Boris Gilbertson created 11 limestone reliefs on the exterior of the post office in 1938. The building, at 19 E. First St., no longer houses the post office, but the artwork remains. Gilbertson also created four aluminum panels, each about 4-feet square, for the Janesville post office when it was located downtown. The panels, which feature wild ducks, were moved in 1990 when the post office moved to a larger facility on Milton Avenue.

Gilbertson, who was born in Evanston, Illinois, but lived for several years in the far northern Wisconsin Bayfield County community of Cornucopia, was awarded a $2,350 commission for his work.

“I don’t want them to disappear,” Gates said of the artwork. “I’m hoping that by writing about them in book form, people can see and appreciate them and know that they’re out there.”

MADISON, Wis. (AP) — The Wisconsin Court of Appeals on Friday reinstated Racine's ordinance to slow the spread of COVID-19 after a lower court…

2 die in head-on crash in Osceola in western Wisconsin

OSCEOLA, Wis. (AP) — Two people have died in a head-on collision in Osceola in western Wisconsin.

MUSCODA, Wis. (AP) — Tom Nondorf wants to forget about this past spring.

COLUMBUS, Wis (AP) — A Wisconsin city that is named after Christopher Columbus will vote on whether to remove a statue of its namesake at a ti… 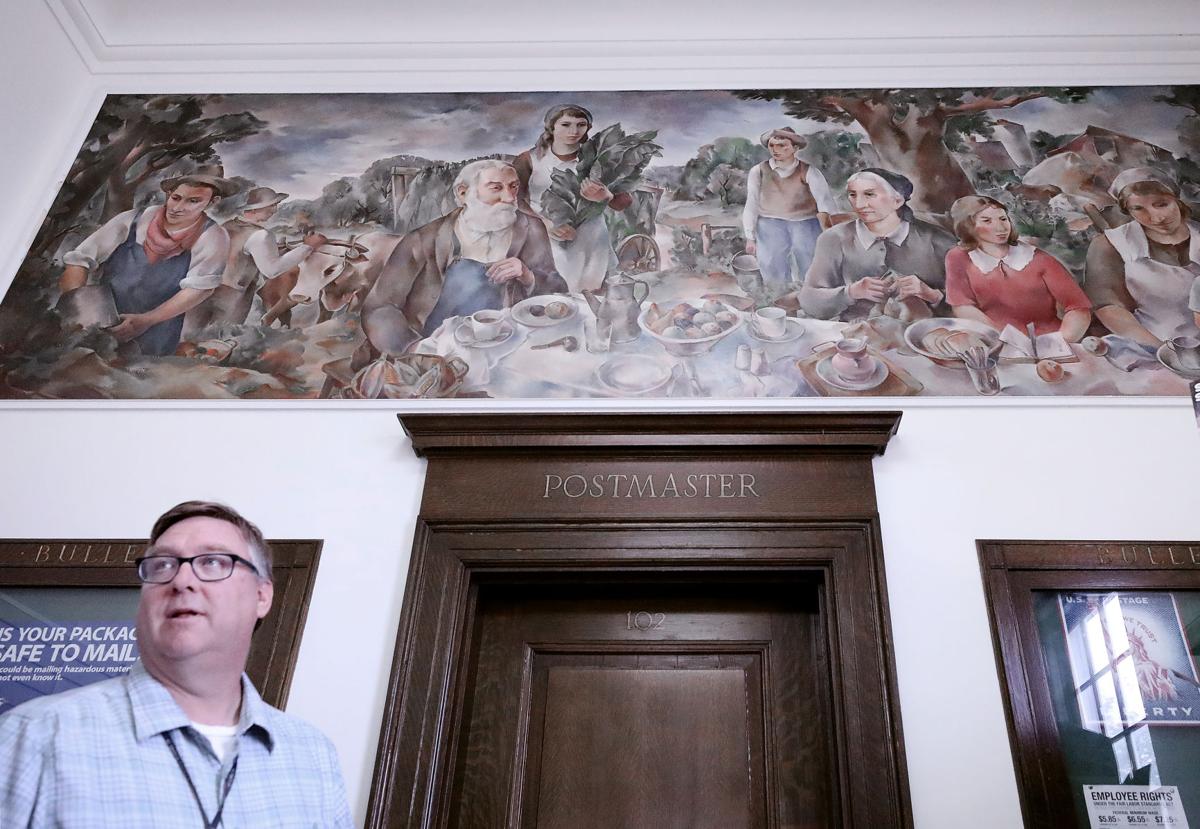 Depicting the region's tobacco farming history, a mural painted in 1941 by artist Vladimir Rousseff is displayed on a wall in the Edgerton post office, where Jon Buchholz is postmaster. The mural is one of 35 works of art commissioned for post offices across Wisconsin in the 1930s and early 1940s as part of a federal New Deal program. 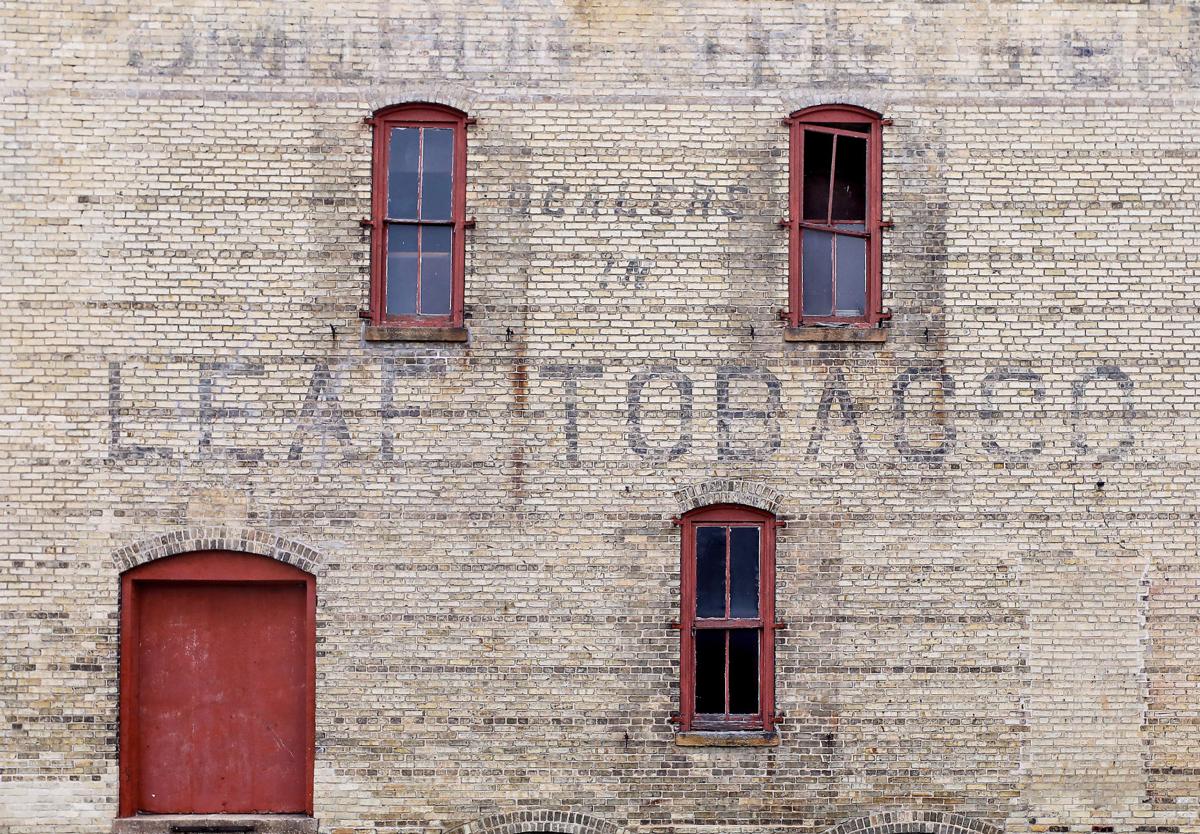 Weathered paint on the exterior of the T.W. Dickinson & Sons building in Edgerton hints at the area's long history of tobacco farming. 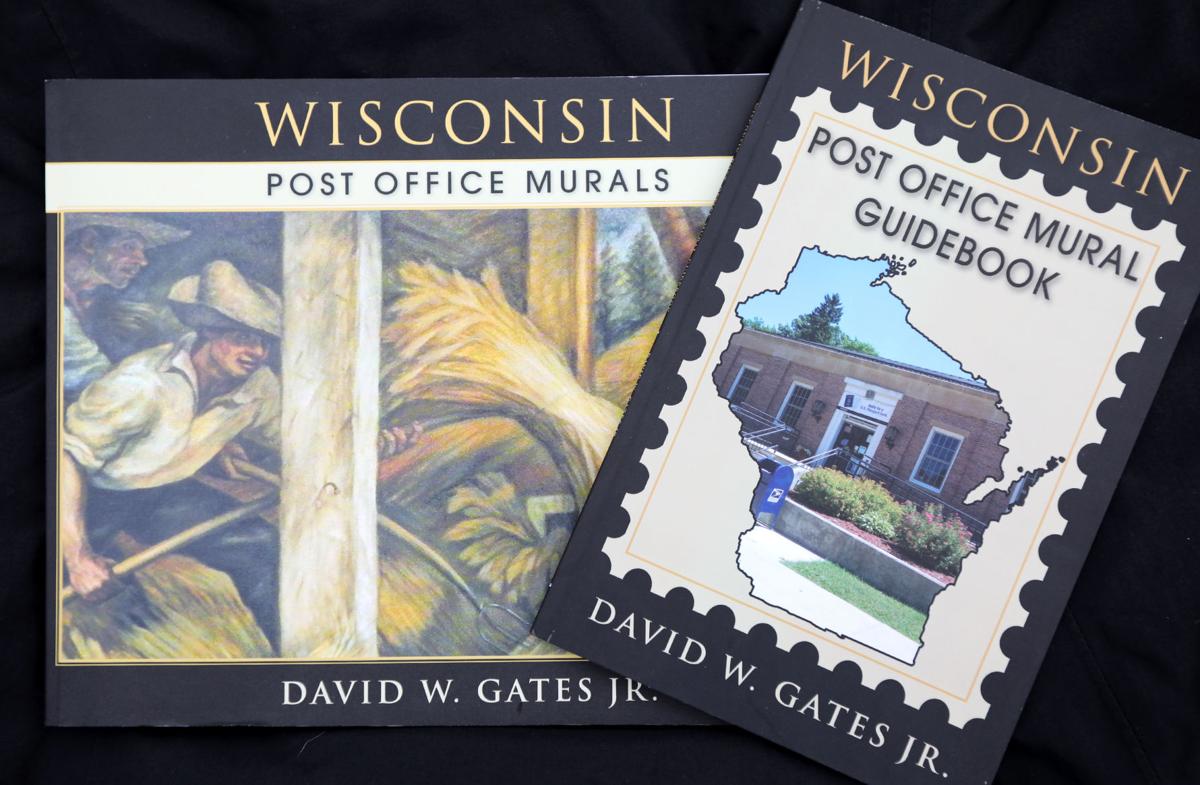 David Gates Jr. has chronicled the works of art in post offices across Wisconsin in a detailed book that includes the backstory of each mural, details of the artist and history of each community. Gates also has a smaller guide book that can be used on the road to help locate post offices. 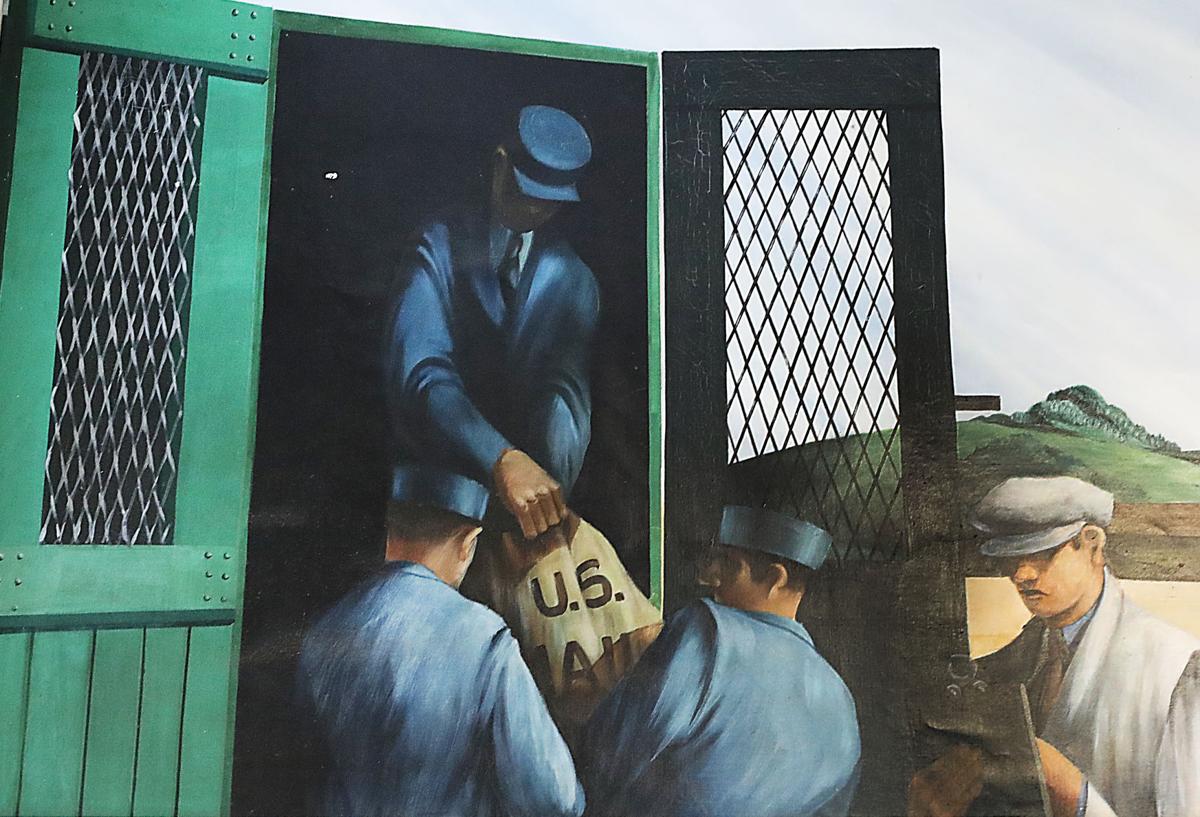 A detail of Edmund Lewandowski's mural in the Stoughton post office. 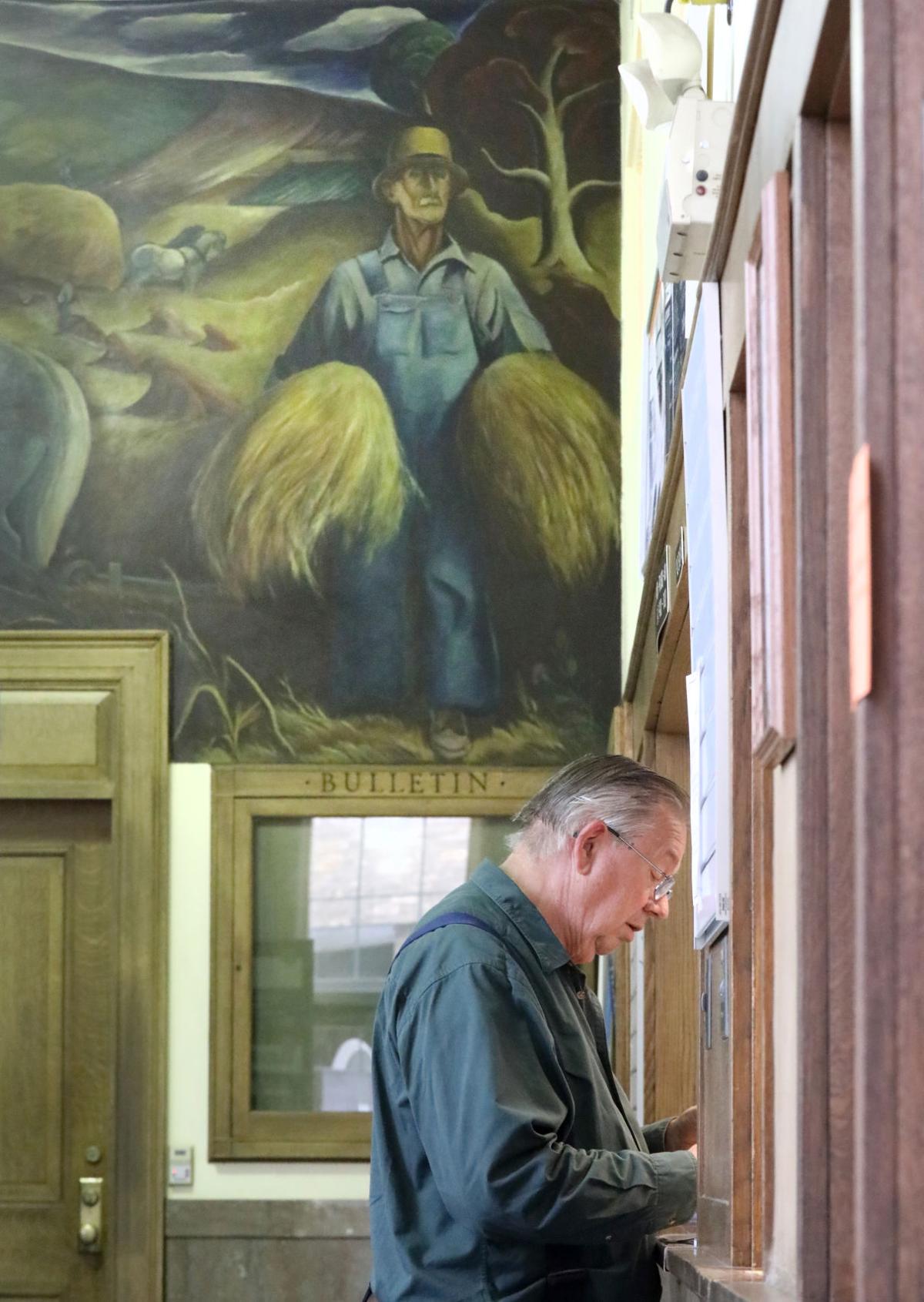 John Bliese, of Mayville, speaks with a clerk last week at the Mayville post office, where a mural paying homage to the community's agricultural history was created by Peter Rotier and installed in 1940. 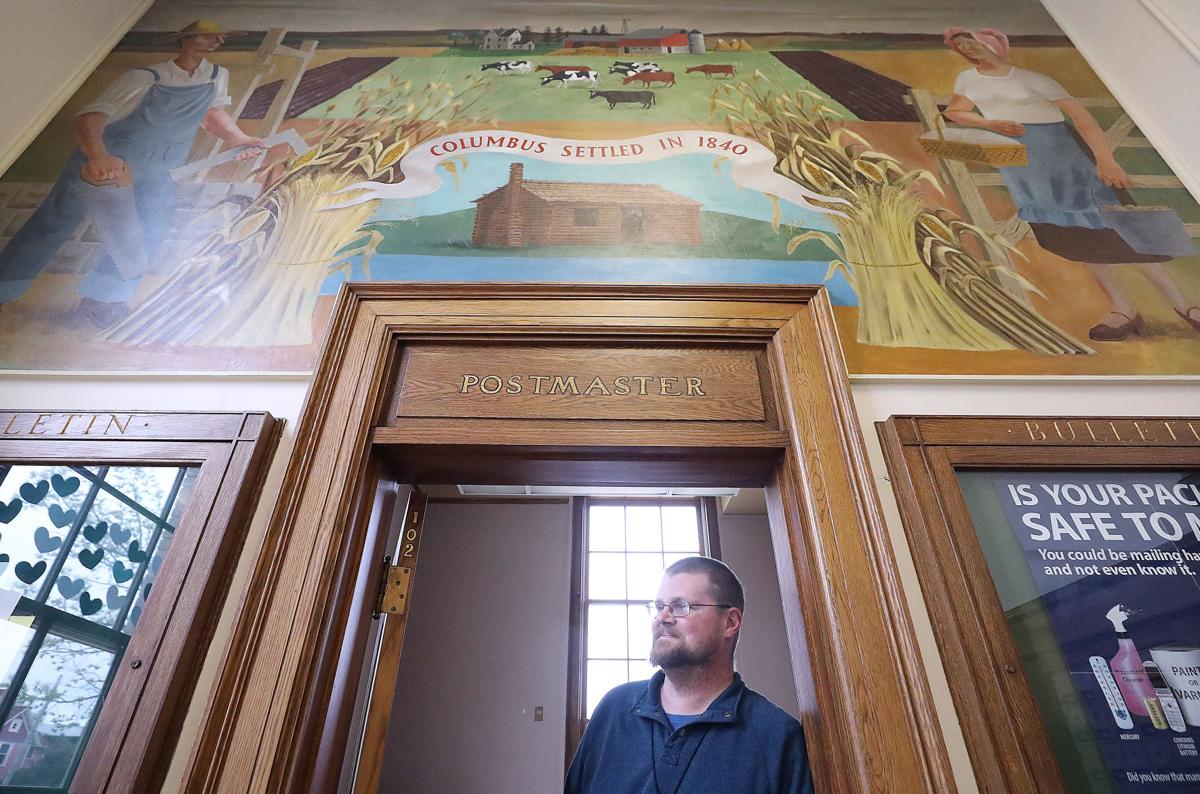 An oil-on-canvas mural painted by Charles W. Thwaites in 1940 hangs above postal supervisor Aaron Horton in Columbus. The mural commemorates the founding of the community in 1840. 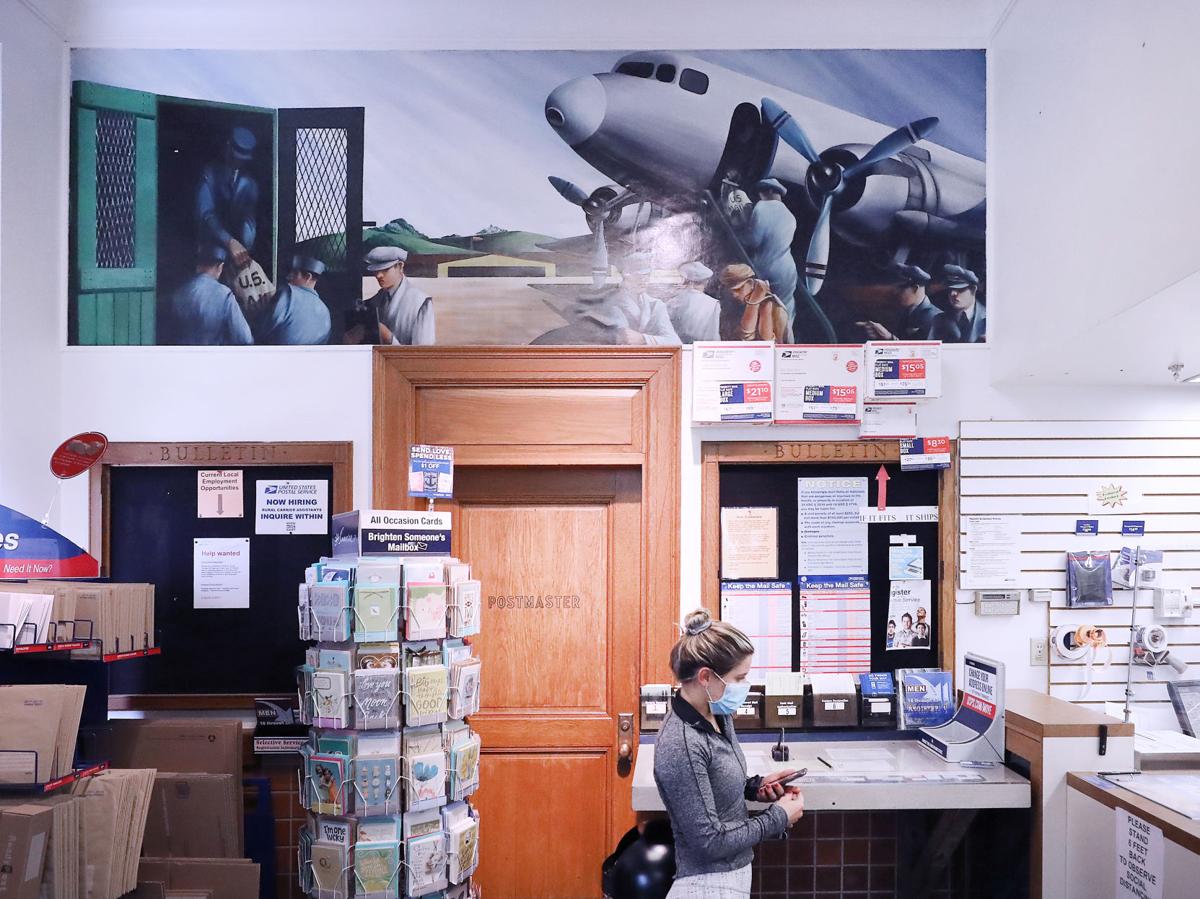 A 1941 mural by Edmund Lewandowski, of Milwaukee, illustrates the U.S. Postal Service's airmail service and looms over the retail area of the Stoughton post office. The mural is one of 35 artworks in post offices across Wisconsin that are now documented in a book by David Gates Jr. 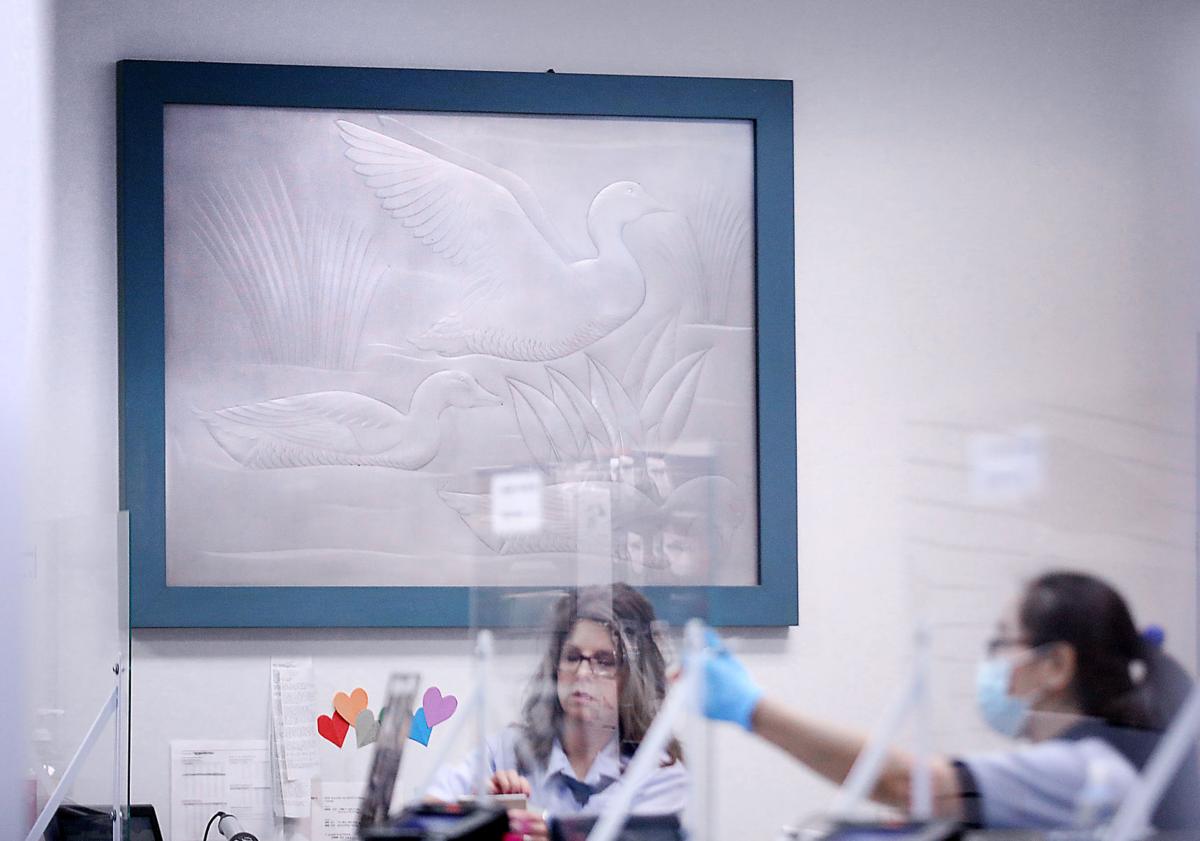 Not all of the artwork in Wisconsin post offices are murals. In Janesville, stamped aluminum reliefs of wild ducks were created in 1938 by artist Boris Gilbertson and installed in the downtown post office. In 1990, the works were moved to a new facility on Milton Avenue. 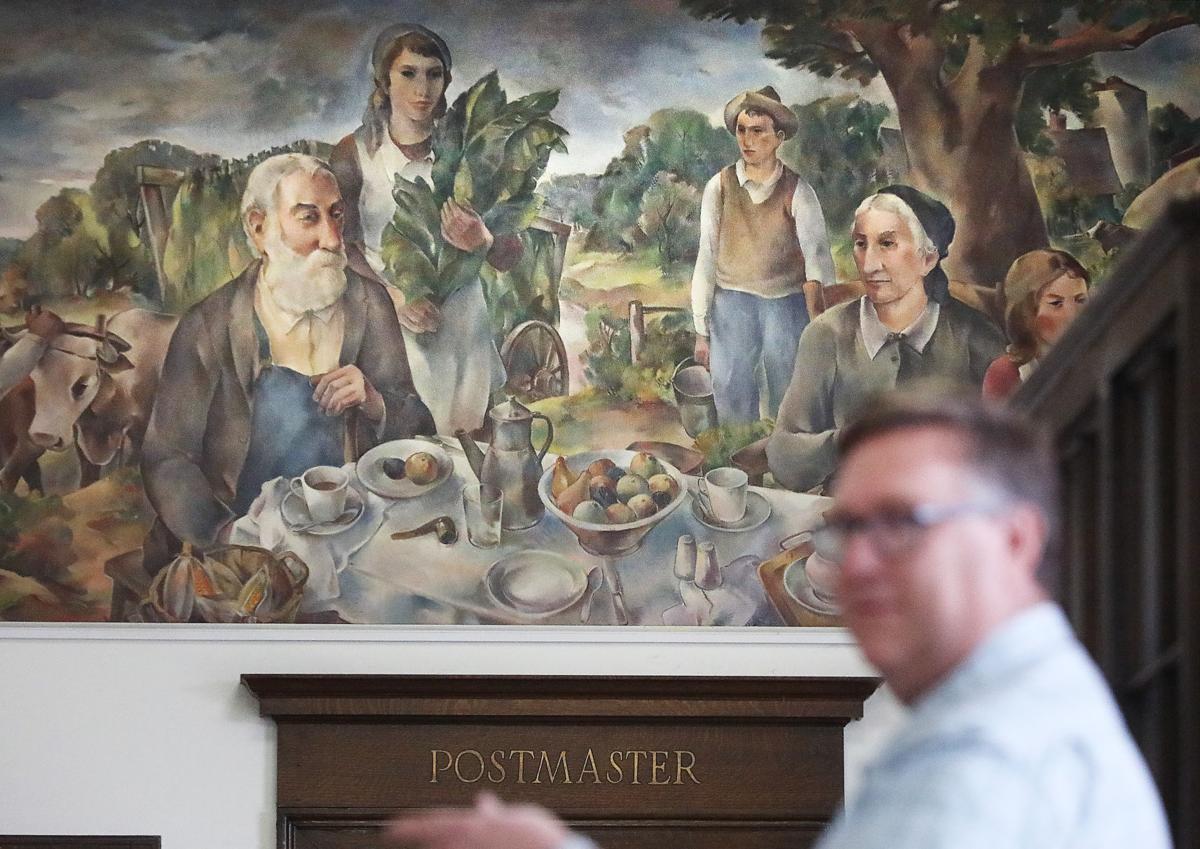 Depicting the region's tobacco farming history, a mural painted in 1941 by Vladimir Rousseff is displayed on a wall above Edgerton postmaster Jon Buchholz. 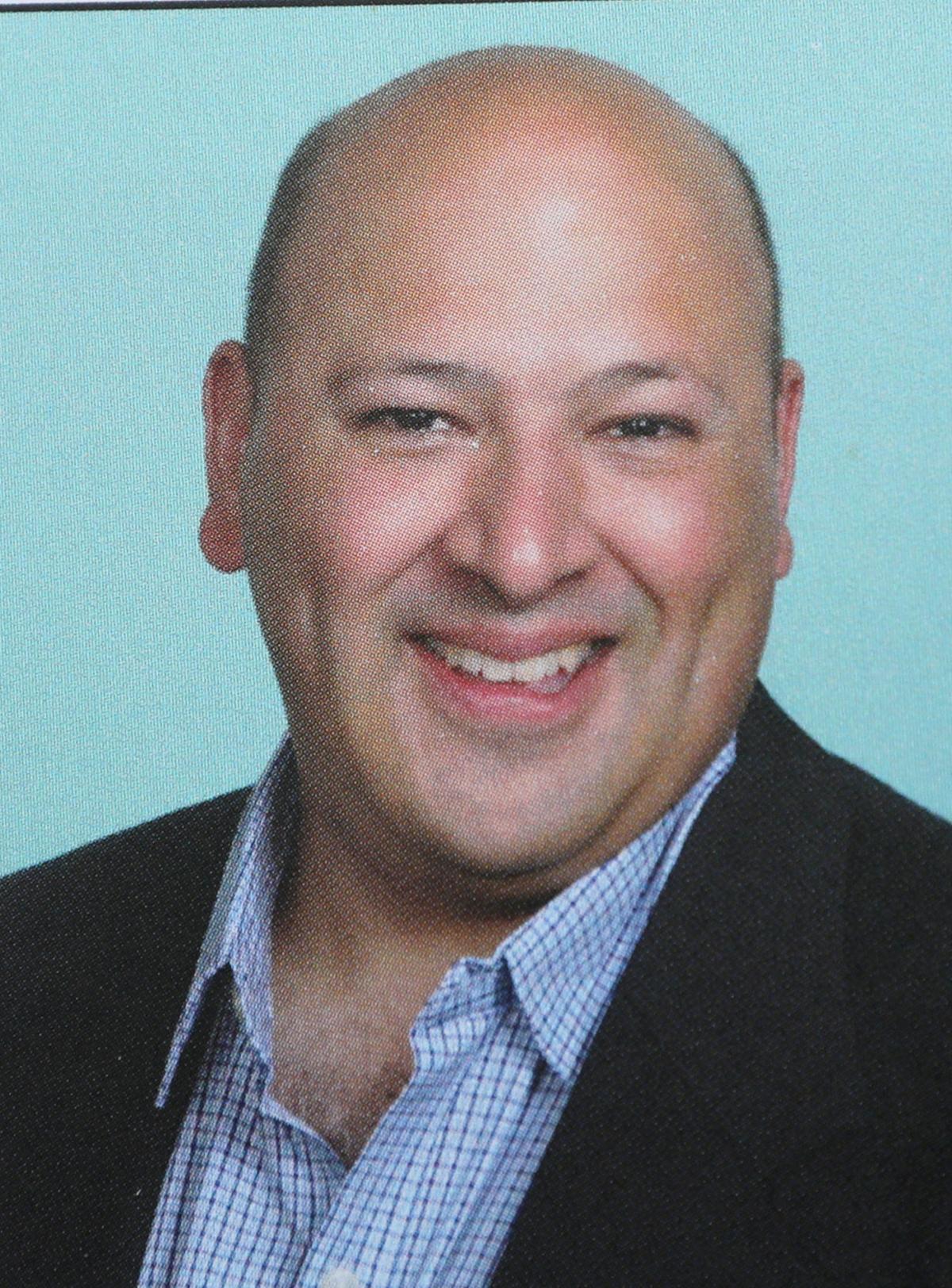