More than 500 people rallied along Fourth Street in downtown La Crosse Friday evening in response to the Supreme Court’s decision to overturn the Roe v. Wade ruling that federally protected abortion in the United States.

Organized by the western Wisconsin chapter of Planned Parenthood, attendees clad in pink held signs and led chants throughout the evening. At times, the crowd filled several blocks on both sides of the street.

The ruling handed down Friday by the Supreme Court allows individual states to determine whether abortions are lawful. In Wisconsin, a 1849 ban on most abortions is in effect, making it unlawful for doctors to perform an abortion except when necessary to save the mother’s life, said Wisconsin Governor Tony Evers in a press conference Friday.

Joella Striebel, the regional coordinator for Planned Parenthood, said seeing several hundred people attend the rally in La Crosse “confirmed what we know” about the public’s view of abortion in the state.

“The people of Wisconsin believe in every individuals right to choose their health care and have privacy in their health care decisions, and make their own choices about whether and when to become a parent,” Striebel said.

People of all ages gathered along Fourth Street to voice their opinions Friday evening, some with their partners, children and grandchildren, and others with their friends.

Sandra Mcanay, 55, and her granddaughter Tiegan Mcanay, 9, attended the rally together. Tiegan, who is visiting La Crosse from New Jersey, said she was rallying because she wants equity for all people.

Although she is past the age where she can have children, Sandra said she wanted to advocate for her children and grandchildren to have the same reproductive freedoms she had.

Other attendees said they were rallying in support of other people.

Amy, who asked not to be identified by her last name, said she is rallying for a friend who performed an unsafe abortion procedure on herself, and lost the ability to have children as a result.

“She doesn’t know I’m here today, but it’s kind of a tribute to her,” Amy said.

Amy said one of her main concerns about the ruling is that more people will either receive or attempt to perform unsafe abortions in states where it is no longer legal.

Talking about her response when the ruling was handed down Friday morning, Audra Hirschfeld said she cried tears of anger, because the Supreme Court “is not representing the will of the people,” and sadness “for the younger generations.”

“We have to somehow get [Roe v. Wade] reinstated, people have to vote in people that are pro-choice,” Hirschfeld said. “I think something that’s really important to know is that pro-choice is not necessarily pro-abortion, there is a difference.”

Brianna Washington, 17, who could often be heard leading chants with a megaphone throughout the rally, said she believes that being vocal and protesting the ruling could result in change.

“Just because [the law] is here right now, doesn’t mean it’s here forever,” Washington said. “As long as we put in the work, it will change.”

Washington said she thinks increasing education around abortion is key to making changes in the future. 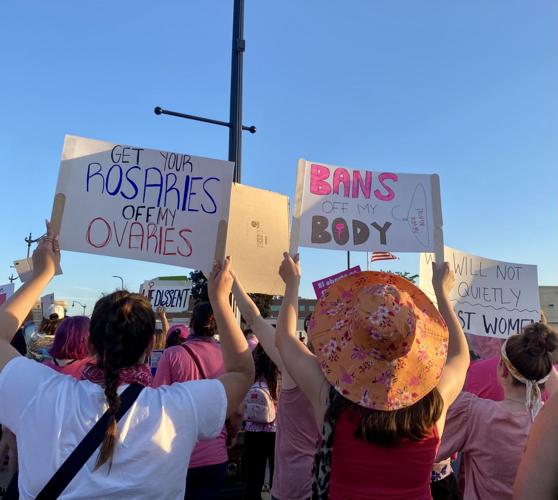 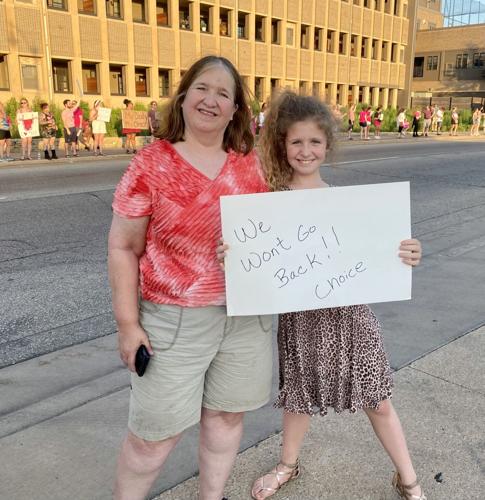 Sandra and Tiegan Mcanay attend the rally together Friday. Sandra said it was important for her to bring her granddaughter to this event.