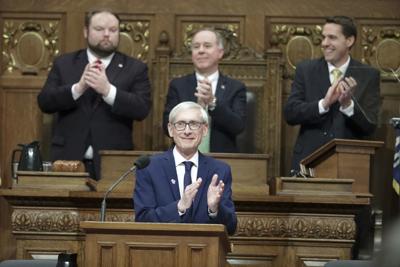 What a difference a dose of fiscal responsibility can make.

This time around, as the coronavirus pandemic has stalled our economy and forced more than half a million Wisconsinites to file for unemployment, state government appears in better shape.

That’s still about $100 million less than what the state Department of Revenue projected in January, before the novel coronavirus hit Wisconsin. Nonetheless, state government is better positioned to weather today’s financial storm for two big reasons.

First, the state’s rainy day fund is substantial. It contains about $762 million to cushion the financial blow. That’s far more than the $50 million the state had socked away as it faced the Great Recession more than a decade ago.

Credit a 2001 law, signed by former Republican Gov. Scott McCallum, for requiring the state to deposit at least half of any unexpected tax revenue into a rainy day fund as a safeguard. State leaders have stuck with that law, which built up a substantial balance over the last decade while the economy was strong.

The second big reason the state budget is better off than in the past is split government. Democratic Gov. Tony Evers controls the executive branch. Republicans run the Legislature. The two sides couldn’t agree how to spend a large budget surplus last January. The Fiscal Bureau had projected the state would pull in $818 million more in revenue than expected by mid-2021 because of a strong economy.

Gov. Evers called for greater spending on schools and property tax relief. Republicans wanted more business and income tax cuts. Because they couldn’t agree, the state held on to more of its money. And that proved beneficial when the pandemic hit.

Wisconsin still faces difficult financial choices the longer the virus restrains our economy. Hopefully, one of several vaccines being tested to keep COVID-19 at bay will soon be approved for widespread use. That would unleash a burst of economic activity as businesses and schools fully reopened.

For now, though, a state budget crunch looms. That means candidates seeking legislative seats in the Nov. 3 election should be telling voters this fall how they would reduce spending and increase revenue to get through hard times.

The next state budget could be ugly if a vaccine isn’t developed. Yet state government’s finances are stronger because extra money was prudently set aside.

Bring an early Trump vs. Biden debate to Wisconsin

OUR VIEW: Commission should add Wisconsin event to get ahead of surge in absentee voters

OUR VIEW: Body-worn cameras are key to seeing what really happens

OUR VIEW: The Madison City Council must do more to help smashed and looted stores