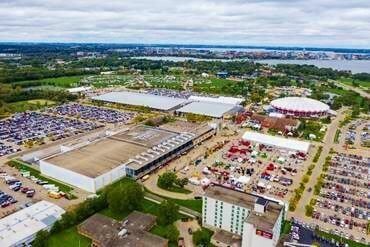 Dane County is planning one of the largest developments in county history — without showing its citizens three options for what’s possible.

That needs to change.

At stake are hundreds of millions of dollars and the future of the sprawling Alliant Energy Center on Madison’s South Side, where larger entertainment venues, new hotels, offices, commercial space and even housing would go.

The price tag is estimated at $300 million to $500 million. County officials claim that releasing the three proposals — which the State Journal sought through an open records request — could damage the county’s negotiating position.

But not releasing the three bids from developers will damage public trust and the public’s right to have meaningful input on how taxpayers’ money is spent and how their community grows. Releasing the three options also could allow the public to inform county officials about issues the county hasn’t considered. That could improve the final product and even save money, especially if the public prefers one of the lower bids.

The city of Madison routinely releases competing proposals for big public projects online for everyone to see. That good-government practice hasn’t hurt the city’s bargaining position, city officials say. So being transparent shouldn’t hurt the county, either.

Dane County’s chief financial officer Charles Hicklin says the county will release the three options only after it signs a contract with the developer it prefers. That’s too late for the public to influence the decision. It leaves the public in the dark while county officials debate the pros and cons of the three alternatives behind closed doors.

Dane County Executive Joe Parisi should order the documents released now so the public can see the bids long before the County Board votes on the plan it prefers.

Respecting the public’s right to know can complicate the job of public officials. It can slow or even stop big projects if lots of people object. It can embarrass elected officials and their administrations if citizens raise potential problems county leaders missed.

But that’s how an open democracy is supposed to work, and it comes with important benefits. When the public is involved and has its say from the start, then the public is much more likely to accept the final decision — even when lots of people disagree. Projects also benefit from broader vetting, with more opportunities to improve details, based on citizen feedback.

Hicklin worries that if the county can’t reach an agreement with the developer it prefers, then public information about that developer’s proposal could strengthen the negotiating position of a second developer. But the State Journal, on behalf of the public, isn’t seeking the details of private negotiations — just the bids as originally submitted nearly four months ago.

A county task force in 2015 estimated the public cost for remaking the Alliant Energy Center could easily top $100 million, with hundreds of millions more in private dollars. Such an enormous public investment, with profound regional impact, demands an open process.

STATE JOURNAL VIEW: Restored statues show resilience of democracy and should soon have a friend

Center Stage with Milfred and Hands