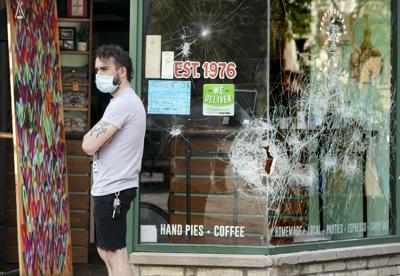 The Madison City Council finally offered some help to smashed-up businesses on and around State Street, albeit a token amount.

The council voted 13-5 last week to steer up to $60,000 to Downtown businesses suffering multiple nights of vandalism and looting following protests against police in recent months.

The money is just a fraction of the $250,000 the City Council blocked July 21, and it’s barely a tenth of the $500,000 originally proposed for a Downtown Recovery Program in June.

Merchants, eateries and clubs in the central city were already struggling with lost business and restrictions due to the coronavirus pandemic. Now, many are trying to attract customers despite boarded-up windows that protect against further senseless attacks.

Madison shop owners deserve better — both from the public and from City Hall, given the importance a healthy Downtown has for the entire region’s vitality and jobs.

Buildings certainly aren’t as important as people’s lives. And the brutal Minneapolis police killing May 25 of George Floyd, an unarmed Black man, understandably led to mass protests across the country. So did the chilling and excessive use of force Aug. 23 against Jacob Blake in Kenosha, who was shot seven times in the back.

But a majority of the Madison City Council has shown little concern for innocent small business people, many of them women and people of color. Those store owners shouldn’t be dismissed as collateral damage in the ongoing and national push for further police reforms.

Madison Mayor Satya Rhodes-Conway pledged support for a robust Downtown Recovery Fund during a recent meeting with the State Journal editorial board. That was good to hear. She noted the city helped the Williamson and Monroe neighborhoods when major street projects disrupted access to local businesses there.

Store owners Downtown are even more deserving of public help because their businesses were repeatedly attacked by mobs. Police have made some arrests. Yet police have been cautious about confronting unruly crowds to avoid igniting greater conflict. That has left small business people unfairly exposed.

The $60,000 also is contingent on matching funds from the private sector, though the Central Business Improvement District has launched a spirited $300,000 private fundraising campaign.

A quarter of the City Council actually voted against the $60,000 expense, including Ald. Max Prestigiacomo, who represents UW-Madison students. He shamefully encouraged rioting on social media by reposting a flyer encouraging others to “f--- s--- up.”

Some council members wanted to help Madison’s Black community before aiding Downtown store owners. And to its credit, the council last week adopted a $750,000 program to encourage entrepreneurs of color to start or expand businesses. But that won’t pay for damaged property.

The city must do more — a lot more — to help Downtown recover.