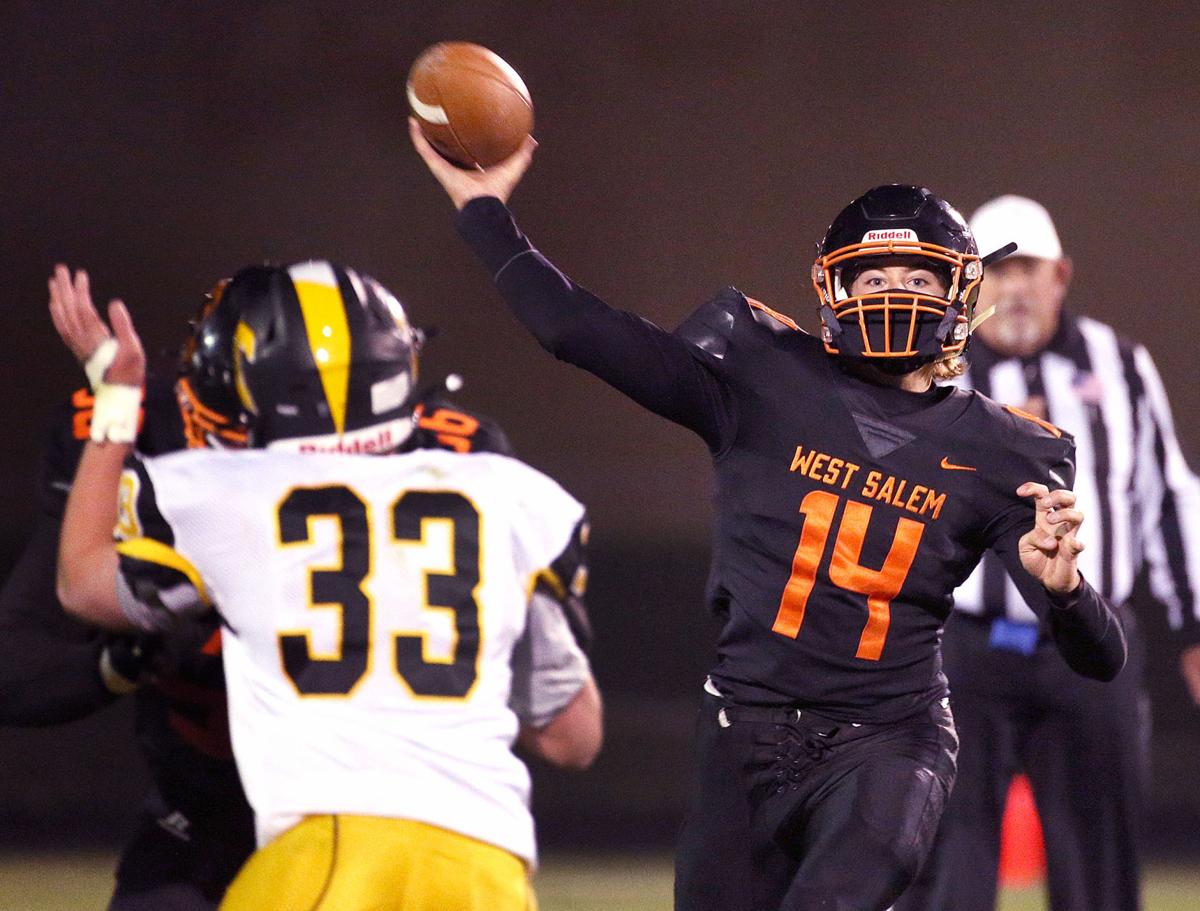 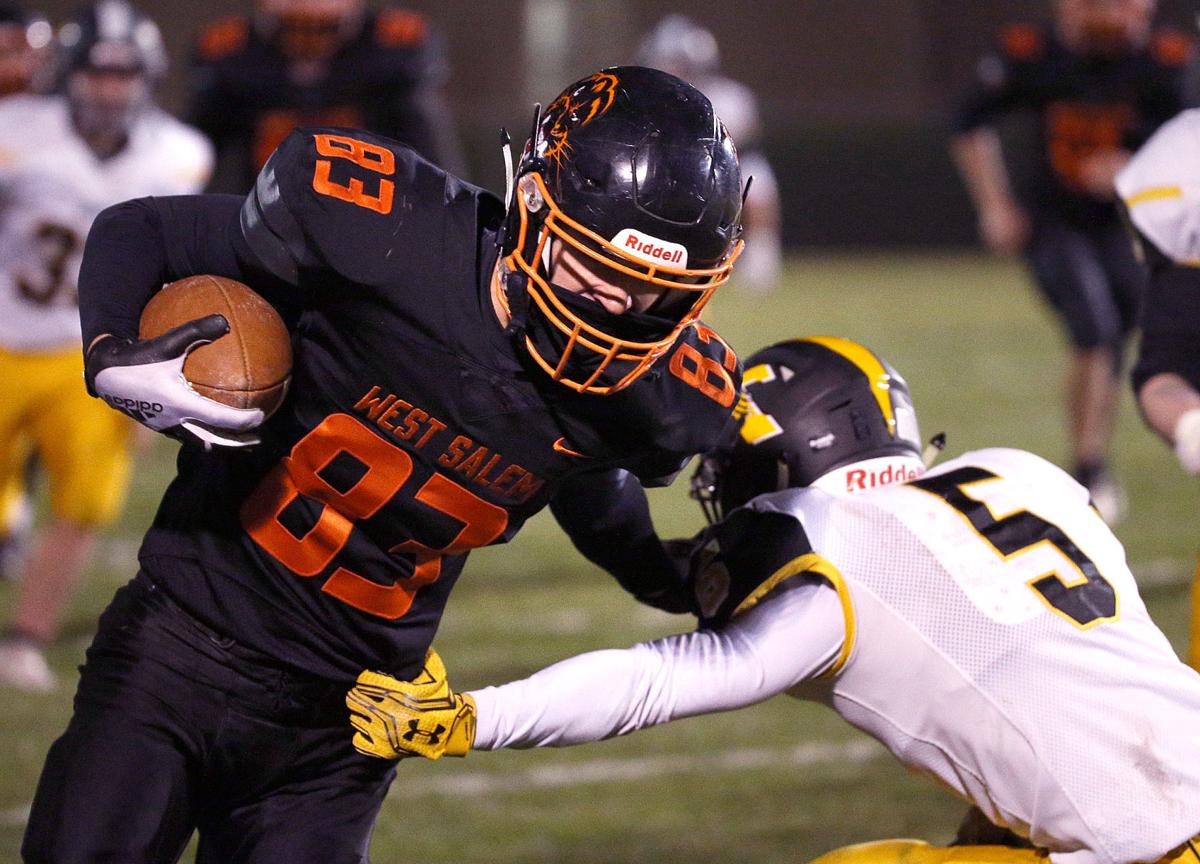 WEST SALEM — It was a pivotal moment, as important in real time as it appears in hindsight.

The Tomah High School football team had just put together a touchdown drive that cut its deficit in half early in the fourth quarter of a game against West Salem on Friday.

The Panthers, trying to win for the first time in more than two full years, were vulnerable. They hadn’t won a game since a 15-point victory over Sparta on Sept. 18, 2018.

That kind of thing can live in the heads of both players and coaches, but especially players.

Not many of the players on the field Friday night played against the Spartans in 2018, but plenty went through nine losses last season and another to kick off this one. The margin of defeat on those games didn’t matter. West Salem wasn’t a typical winless team and knew it.

But making something happen on the field to win isn’t easy when those losses can pop up in thought so quickly the second something goes wrong. Coaches like to talk about learning from adversity, and this moment was the Panthers’ chance to show that they could.

And with a sophomore quarterback leading the charge during his first start, they did.

It was just one drive, just one possession. But it was much more.

The Panthers (1-1) might not have won 28-14 on Friday without making the plays that followed that touchdown by Tomah with 9 minutes, 25 seconds on the clock.

Sure, the defense might have been playing well enough to make the lead stand. But the luxury of knowing it had some latitude if something didn’t go exactly as planned eased the pressure on its shoulders.

The drive wasn’t especially long because it started near midfield. It wasn’t a one-play explosion that quickly changed the tone of the game.

It was a calm and steady attack that called on Brett McConkey — that sophomore quarterback — and Jack Hehli — a three-sport star and two-way contributor playing wide receiver in this instance — to provide their program something to build on.

“We liked where we were coming out of halftime (with a 14-7 lead),” West Salem coach Justin Jehn said. “But that was a drive where the just made plays and made plays we needed.

“We had to grind something out there and take some clock away from (the Timberwolves). That was important.”

The Panthers converted three third-down snaps during the drive, and all of them included McConkey finding Hehli to finish the play.

The first was the most basic. McConkey dropped back and fired to his left, where Hehli awaited near the line of scrimmage. He made a simple cut to the middle of the field and burst through a gap between defenders for a modest gain, but one that gave West Salem a first down.

The second was the most impressive and involved McConkey lofting a much longer pass toward the right sideline. Hehli slipped just behind Kade Gnewikow and went over him to get his hands on the ball. He landed on his left side in bounds for a 28-yard gain.

Gnewikow probably couldn’t have defended the play much better. McConkey’s throw was right on the money and in a spot only Hehli could have caught it. It gave the Panthers a first down near the 20-yard line.

The last conversion was also the finisher, and it lit up the West Salem sideline.

Hehli was open in the end zone for this one. The 14-yard pass flew right over teammate Zack Neimeier as he crossed the field, and Hehli caught the ball while sprinting toward the front of the end zone to get in front of the defender.

The touchdown came with 4:59 left and put the last touch on a possession that lasted 4 minutes, 26 seconds. Jehn was as happy with that as he was the execution along the way.

Again, it was just one drive, just one possession. But it was much more.

“It was huge,” said McConkey, who passed for 114 yards and rushed for 56. “It gave us confidence. It gave everyone on the sideline momentum and everyone on our team momentum.

“It picked up everyone.”

The next challenge is turning it into something bigger. Aquinas brings its 3-0 record to West Salem on Friday to represent the first step of that challenge.

3: Interceptions for the West Salem defense

13: Consecutive losses for the Panthers before Friday's 28-14 win over Tomah

82: Receiving yards for junior Jack Hehli, who caught a TD pass and intercepted a pass in the end zone

Friday night football: Catch up with our game stories, photos and video