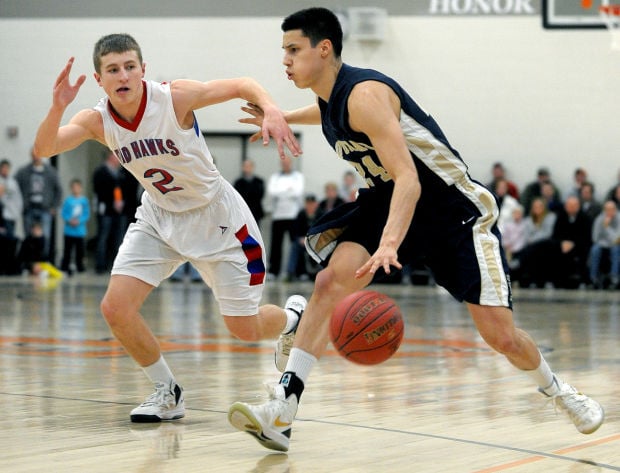 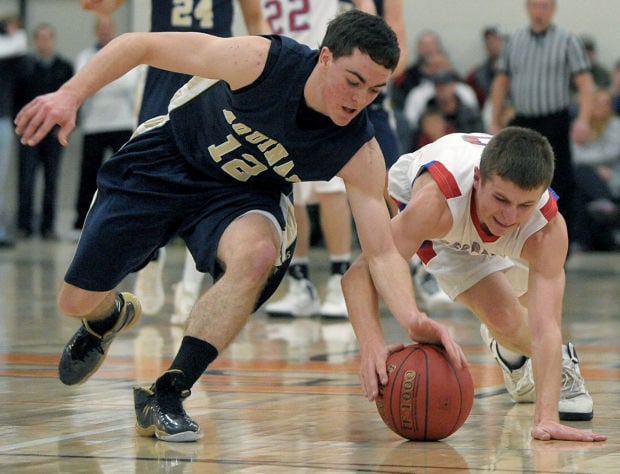 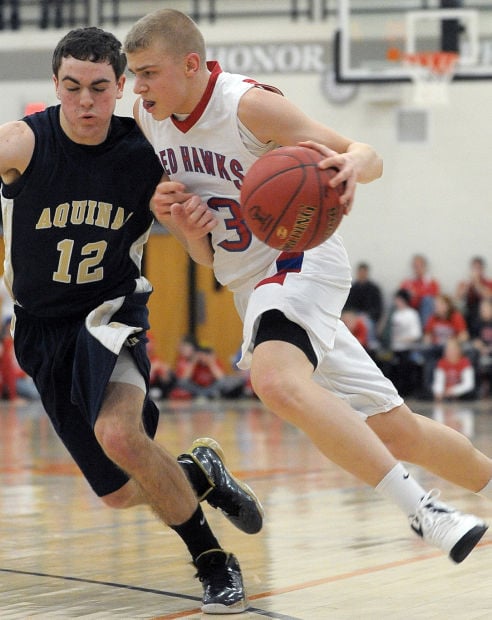 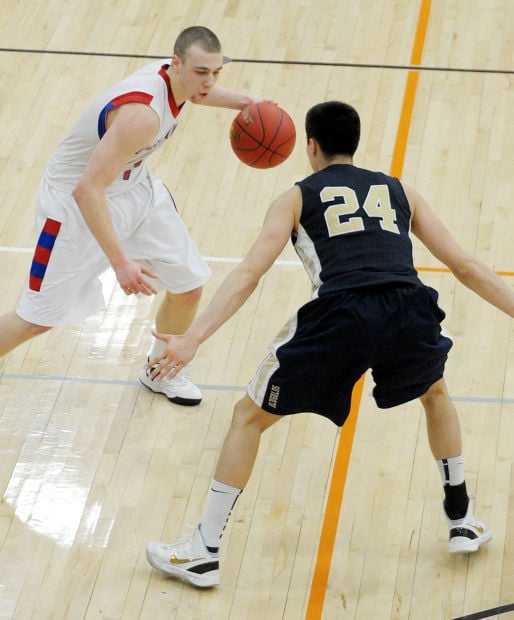 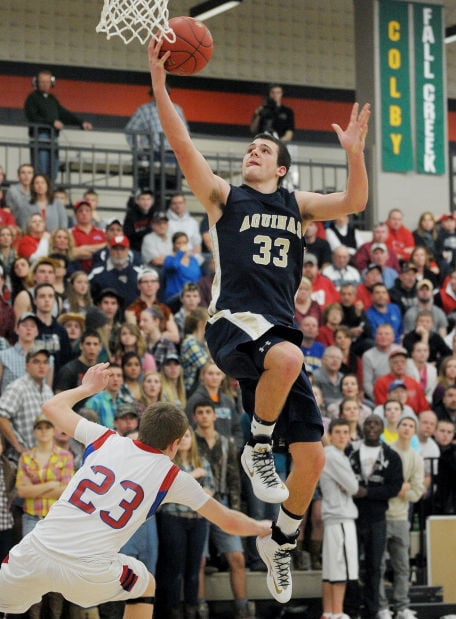 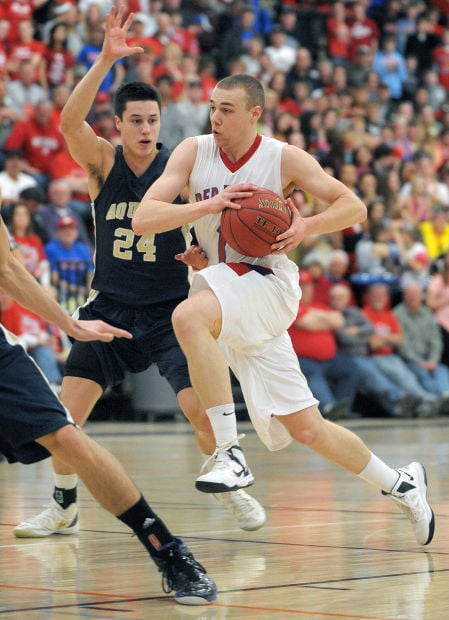 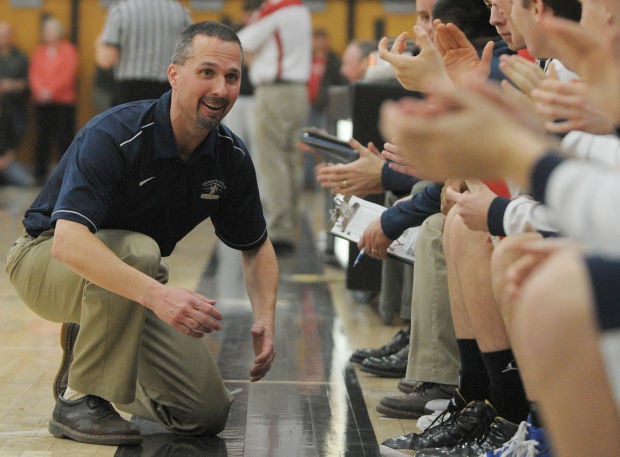 Aquinas coach Rick Schneider smiles at the Aquinas bench as the clock counts down on their WIAA Division sectional semifinal win over G-E-T on Thursday, Feb, 28, 2013, in Osseo, Wis. (Rory O'Driscoll/La Crosse Tribune) 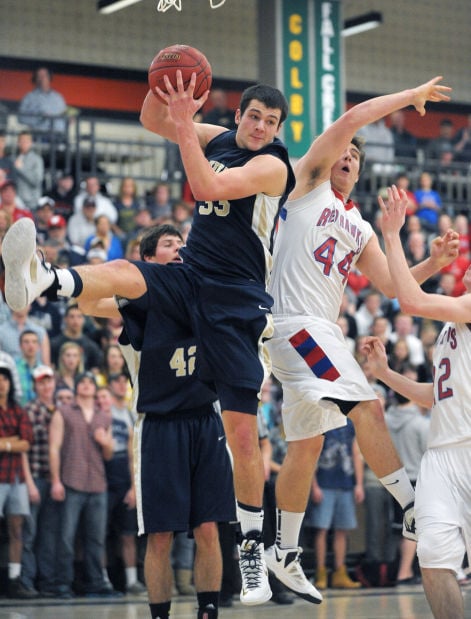 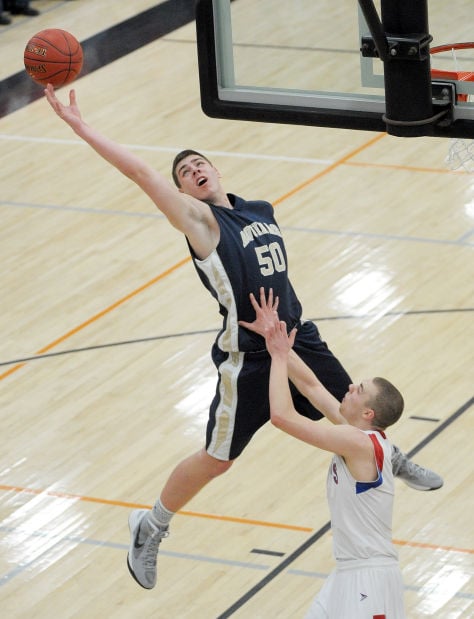 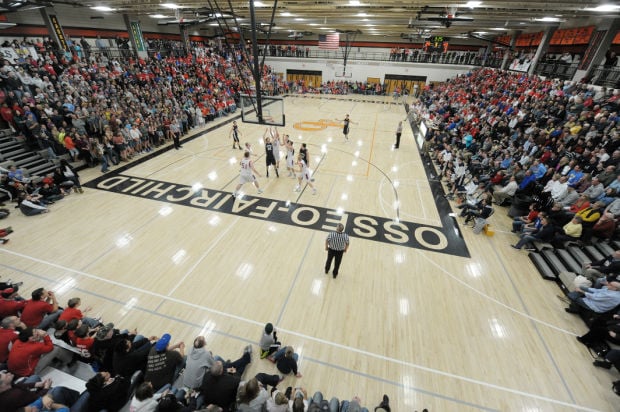 The Aquinas High School senior had to keep his defensive focus despite an outburst that Gale-Ettrick-Trempealeau senior Tim Wagner unleashed on a crowd of more than 2,000 people at Osseo-Fairchild High School.

Koenig remained calm and focused during and after every 3-pointer Wagner made and led the Blugolds to a 63-47 victory over the Red Hawks in a WIAA Division 3 sectional semifinal.

Koenig countered Wagner’s game-high 33 points with 29 of his own and controlled an Aquinas performance that was more one-sided than the final score indicates.

“Even when he was making those shots, we knew we could win because he wasn’t going to make them the whole game,” said Koenig, whose 21-4 team plays Barron (24-1) in a 2 p.m. Saturday sectional final in River Falls, Wis.

“What we wanted to do was shut down Nick Wagner and the role players, and it was going to be hard for them to win if we did.”

Tim Wagner made 9 of 19 shots and was 6-for-12 from behind the 3-point line. He made fadeaways, he made shots a few feet behind the line, and he made them over the outstretched arms of Koenig and even 6-foot-7 Parker Weber.

But his teammates struggled mightily. Wagner scored all 14 of the Red Hawks’ points in the first quarter and 28 of their 31 in the first three quarters.

G-E-T players other than Wagner shot 1-for-12 from the floor and 1-for-2 from the free-throw line in the first three quarters.

“It was tough to get shots because they are such good defenders and so gifted athletically,” G-E-T coach Mark Wagner said of the Blugolds. “And it’s hard to stay with them when Bronson is shooting the ball like that.

“I thought he was awful good tonight.”

The lack of shots by his teammates forced Tim Wagner to create on his own during almost every possession. He missed his first 3-point attempt, but he made the next five to keep his team within striking distance in a game it never led.

“The way (the Blugolds) play, you have to make one-on-one plays,” Tim Wagner said. “They lock on to you, and someone had to try and make those kinds of plays.”

Koenig was 10-for-14 from the floor and made 5 of 8 shots from the 3-point line. He also had five assists, four rebounds and a blocked shot and hit a 3-pointer to beat the buzzer at the end of the first and third quarters..

Senior Michael Conway added 10 points and 11 rebounds in a game that featured 55.5-percent shooting by the Blugolds, who pulled away with an 18-8 run through the third quarter.

I think this was as dialed-in as we’ve been all season,” Aquinas coach Rick Schneider said. “The kids were attentive in what they had to do, and it paid off for them. For us, this a great game to have moving forward.”

Conway’s presence on the boards helped Aquinas create a 36-20 rebounding advantage and nearly erased any opportunity for G-E-T (20-5) to get second-chance points. The Red Hawks had only five possessions with at least two shots, and three of them were the result of a ball tipped out of bounds.

“That was a huge thing for us tonight,” Conway said of the advantage on the boards. “(Chandler) Lamke and Nick Scherr battle hard down low, and we made sure to get bodies on them.”

In ‘huge pickup’ Rasul Douglas, Packers find themselves an ‘unbelievable pro’ — and a game-changer

On Wednesday, Rasul Douglas won the NFC defensive player of the week award, making him the first Packers cornerback to be so honored since Pro Football Hall of Famer Charles Woodson won it in October 2010.

GALESVILLE — Cody Schmitz succeeded in taking the ball to the basket and in knocking down jump shots. He scored points early and often.

Scott Servais' baseball career and life were shaped by his small-town upbringing in Vernon County.

Jim Polzin: Packers positioned for regular-season success after grinding out a victory over the Rams

Matt LaFleur’s team all but secured the North division while putting itself in great shape in the race for a No. 1 seed in the NFC with an effort that, while far from perfect, was more than enough to send them into their off week on a happy note.

A little more than five years after his Aquinas High School football team had to forfeit a game because it didn’t have enough healthy players,…

A WIAA Division 5 state championship set up a slew of postseason honors for the Aquinas High School football team this season, and three of it…

Aquinas coach Rick Schneider smiles at the Aquinas bench as the clock counts down on their WIAA Division sectional semifinal win over G-E-T on Thursday, Feb, 28, 2013, in Osseo, Wis. (Rory O'Driscoll/La Crosse Tribune)