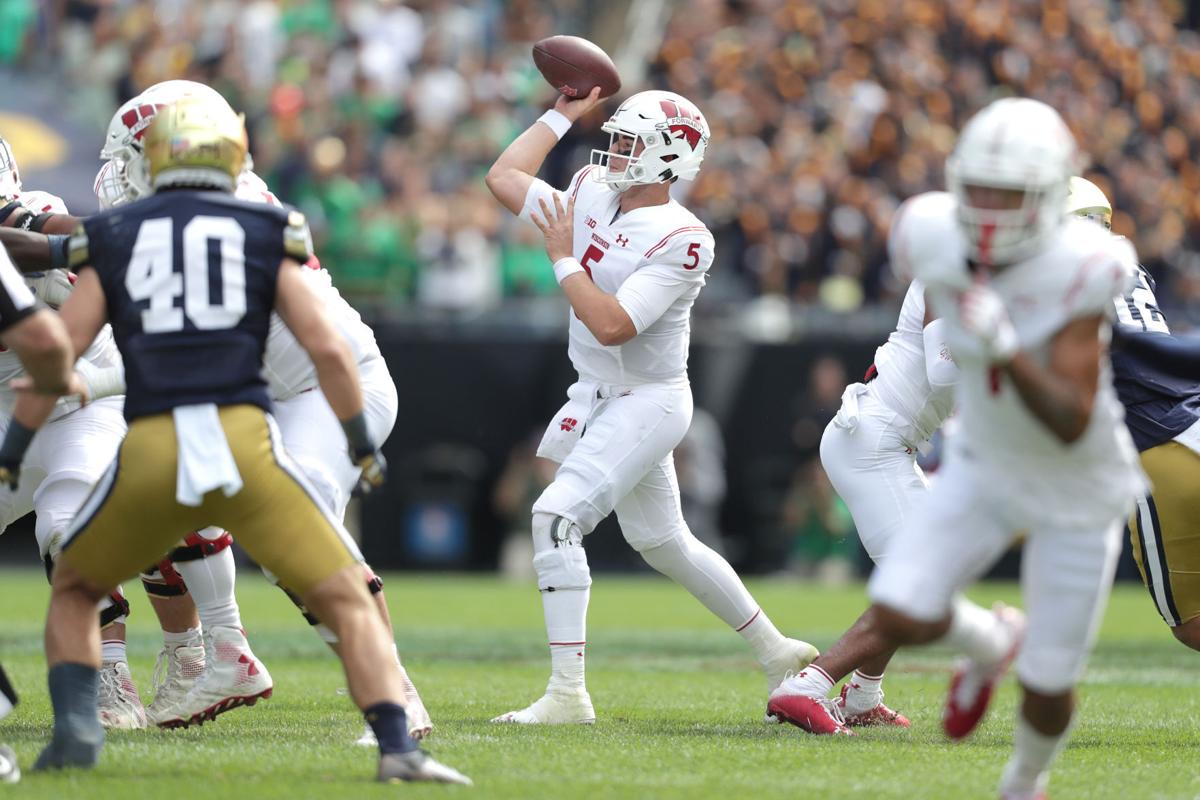 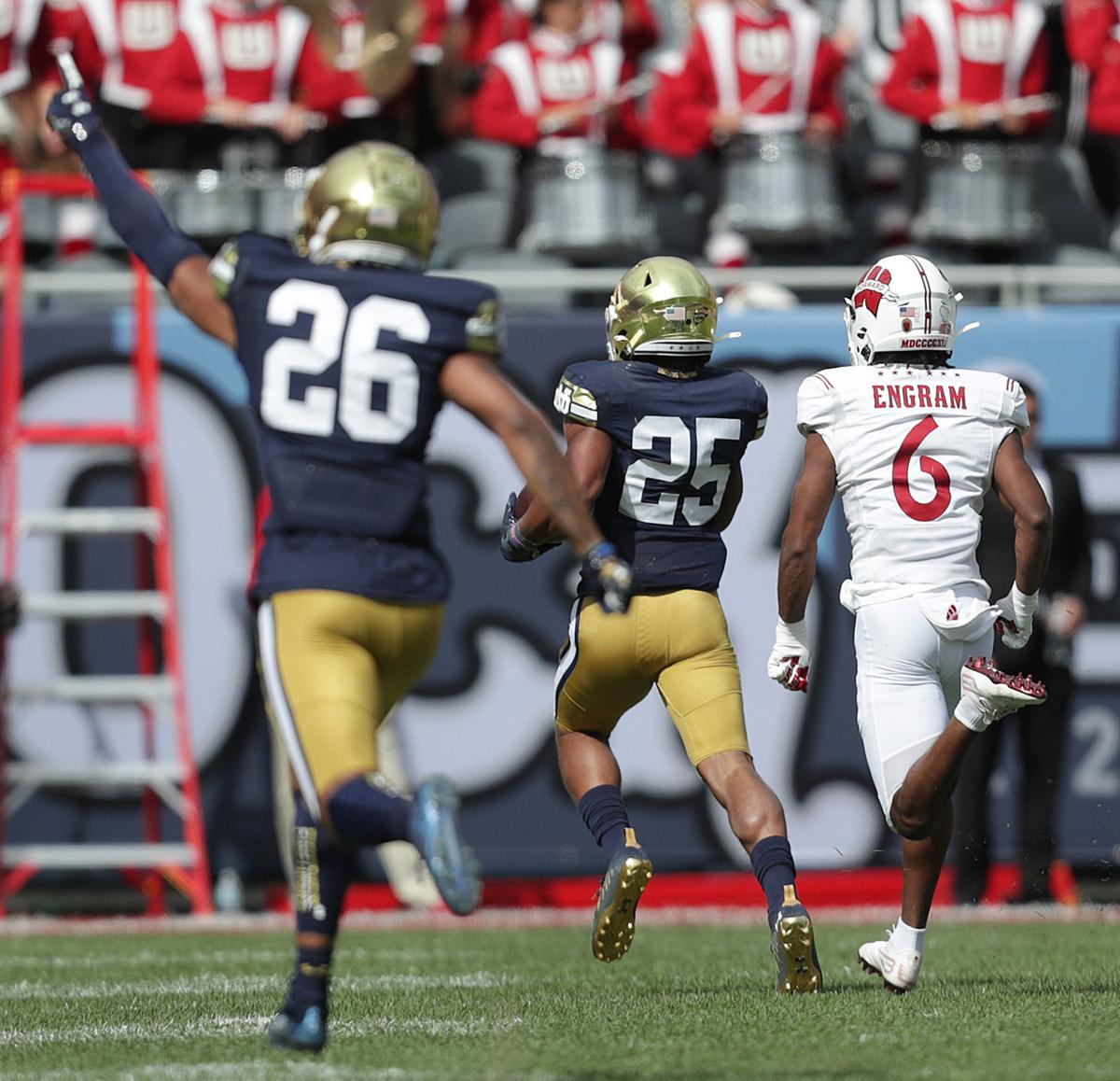 Notre Dame's Chris Tyree (25) scores on a 96-yard kickoff return with 14:01 remaining in Saturday's game at Soldier Field. The score gave the Fighting Irish a 17-13 lead. 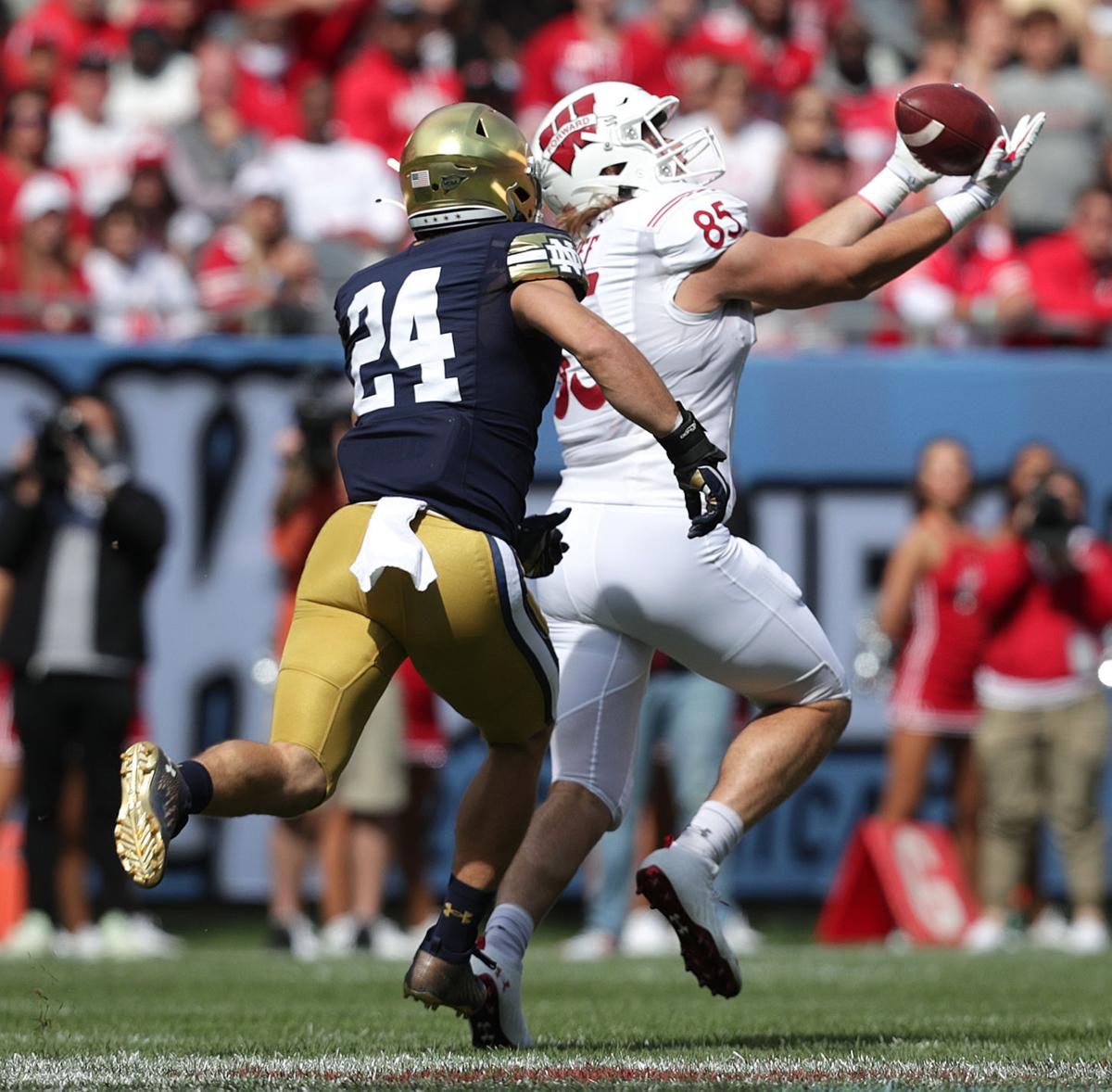 UW tight end Clay Cundiff gets behind the coverage of Notre Dame linebacker Jack Kiser for a 43-yard reception during the first half.

CHICAGO — After the worst game of his collegiate career, University of Wisconsin quarterback Graham Mertz was resolute in his self-confidence.

“Confidence never should waver,” Mertz said. “It’s about playing good football. And when you don’t play good football, you get frustrated, but it should never affect how you view yourself as a human being in the person. So for me, confidence is never going to change, never going to falter.”

The problem for the No. 18 Badgers is that Mertz’s confidence isn’t translating to good play or points on the field. Outside of a handful of plays, Mertz was off target throughout Saturday’s 41-13 loss to No. 12 Notre Dame before a crowd of 59,571 at Soldier Field.

Mertz’s stat line was as ugly as the fourth quarter for the Badgers (1-2), a period in which they allowed 31 unanswered points. Mertz turned the ball over five times, including two pick-sixes in the final minutes he admitted were attempts to force the ball into coverage, adding to an overwhelmingly negative day for the UW offense.

Mertz finished 18 of 41 for 240 yards, and his third-quarter touchdown tied the game at 10. His 43.9% completion rate was the lowest of his career, and the Irish (4-0) didn’t have to defend the deep part of the field with much effort because Mertz’s throws to that area weren’t accurate enough to give his receivers chances.

The struggles Mertz had were the same that he’s had through many of his poor performances — an inability to convert third downs, not maintaining his fundamentals when the pocket closes in, poor ball placement down the field and bad ball security. Before diving into each of these and the issues they create, it’s important to note not everything about the loss to the Irish was Mertz’s fault.

“It is a team sport,” UW coach Paul Chryst said. “To put it all on Graham, that would be wrong. I think there’s a lot of areas where we just need to be better if we’re going to give ourselves a chance.”

UW rushed for 74 yards on 28 carries, an average of 2.6 yards. Not running the ball well consistently put UW into third-and-long situations — pure drop-back plays that Mertz isn’t as effective in. The Badgers went 1 of 14 on third down, with the average distance needed on the failed third downs being 7 yards.

Mertz’s first interception was on a third-and-10, he fumbled on a third-and-11 dropback and threw a pick-six on a third-and-3 with the game already out of reach in the final 70 seconds. Mertz hasn’t yet shown the ability to be a quarterback that can drop back and pick teams apart, so he needs a running game to keep down-and-distance manageable. Still, the Badgers entered the game with a 36.3% third-down conversion rate and that metric is down to 27.7%.

Rapid replay: Wisconsin needed to play its best game in two season to beat Notre Dame. The Badgers wilted instead

But there are things Mertz can do individually that he hasn’t yet, especially in the pocket. UW’s line was OK in pass protection against Notre Dame — it allowed one sack and five quarterback hurries on 42 dropbacks — but Mertz let his eyes drop to look at the rush too often. When that happens, he unnecessarily drifts back in the pocket, moving his momentum backward and making stepping into throws more difficult and balls sail because of that movement. That has to change for him to play better.

It might mean taking a few more hits per game, and UW can’t afford an injury because backup Chase Wolf hasn’t played any better than Mertz in limited snaps, but it will give him more chances to make throws.

“I’ve just got to step into it, trust it, maybe take a shot,” Mertz said.

Mertz’s inconsistent ball placement down the field limits what UW can do in the passing game. His 43-yard pass down the middle to tight end Clay Cundiff led him well and was in a place only Cundiff could catch it. But later in the game, a shot to Chimere Dike (zero catches, one target) down the right sideline was at least 2 yards deep and 2 yards out of bounds from where it needed to be.

Another throw up the seam to Danny Davis — he had a step on his man, but the throw would’ve needed to be in a small window to eliminate the safety’s chance of making a play — went incomplete on the first play of a drive in the third quarter. Mertz needs to find his touch on these throws because teams are continuing to load the box to stop the running game and too often the Badgers’ offense isn’t able to keep the opponent honest.

Mertz’s last struggle is one many younger quarterbacks go through, but with this being his third year in college, he needs to fix: ball security. Mertz fumbled early in the fourth quarter, one of his five giveaways, on a play where he just has to accept defeat and go down. He tried to fight off the sack of Jayson Ademilola and it cost the Badgers the ball and put the defense in bad field position already down 17-13.

If the Badgers punt there and the defense can make another stand, UW may have a more legitimate chance at comeback. Instead, Notre Dame scored again and the wheels came off.

Mertz said he wasn’t worried about losing his job, and Chryst didn’t say he was considering major changes after the performance.

As much as the Badgers didn’t do to help their quarterback against the Irish, he didn’t help himself or the team much either.

Jim Polzin: The Wisconsin Badgers' failure to finish against good teams has become the program's identity

Paul Chryst has lost seven consecutive games to ranked opponents and is 5-7 overall over a 12-game stretch dating to late in the 2019 season. Mediocrity is becoming the program's identity.

Jim Polzin: The Wisconsin football team has been stuck in a rut before. Can it get out of this one?

Photos: No. 12 Notre Dame trounces No. 18 Wisconsin in Soldier Field

Columnist Jim Polzin asked Badgers fans on Twitter what they thought about No. 18 Wisconsin's 41-13 loss to No. 12 Notre Dame on Saturday at S…

Here are some of the best signs as 'College GameDay' visits Soldier Field for Badgers vs. Fighting Irish

With the University of Wisconsin football team taking on Notre Dame for the first time in 57 years, Saturday's game at Soldier Field in Chicag…

Notre Dame's Chris Tyree (25) scores on a 96-yard kickoff return with 14:01 remaining in Saturday's game at Soldier Field. The score gave the Fighting Irish a 17-13 lead.

UW tight end Clay Cundiff gets behind the coverage of Notre Dame linebacker Jack Kiser for a 43-yard reception during the first half.