To those outside the University of Wisconsin football program, it was a solid play in a disappointing loss.

But for Jack Eschenbach, the 22-yard catch-and-run against Indiana last season was a milestone, one that helped propel him into an important offseason.

“I think that catch is huge to get it out of the way and kind of solidify like, ‘Yeah, I belong here. I read the coverage right, I knew the play,’” Eschenbach told reporters Friday. “I think that really helps with confidence, just knowing that that kind of gives you that reassurance that, yes, I can do it.”

Eschenbach, a junior, is one of a handful of tight ends looking to solidify spots on the depth chart behind senior Jake Ferguson, who led the Badgers in receiving last season. Eschenbach only had one other catch last year, a 5-yarder against Northwestern, as he split time as the No. 2 tight end with sophomore Hayden Rucci.

Making significant plays needs to become a more regular occurrence for Eschenbach, who’s been turning heads during spring practices with contested catches over the middle of the field and flashing good speed for his position.

“He’s approaching it like a veteran, like a guy that’s his age,” tight ends coach Mickey Turner said. “He’s probably put as much effort as anybody in the group, or you could ask anybody on the team, he’s put as much effort in this offseason. So I’m excited about ‘Esch.’”

A 6-foot-6 native of Downers Grove, Illinois, Eschenbach arrived as a walk-on wide receiver in 2018. He was foreign to blocking, especially on the line of scrimmage that the Badgers require tight ends to do so often.

“I wouldn’t trust him to block anybody his freshman year, it was bad,” Ferguson said on the State Journal’s Red Zone podcast. Ferguson could relate because he was in a similar situation as he transitioned from being a standout receiver at Madison Memorial to having to block as a UW tight end.

But Eschenbach has dedicated himself to learning, and has developed his body and technique to handle the rigors of being an in-line tight end. His physical maturation — he’s up nearly 50 pounds since arriving on campus — was a significant factor in his improvement.

Ferguson and Eschenbach recently watched some of Eschenbach’s first practices. Ferguson said there’s little relation between the player on tape and the one he sees at practices now.

“Where he’s come from is mind-blowing,” Ferguson said. “As a freshman, we’re getting tossed, he was getting twisted, tossed. Now he’s working this technique, getting through it, getting his hands inside, working his long arms. It’s awesome to watch.”

Tatum Grass pushes for bigger role among Badgers' inside linebackers

Eschenbach also had to learn to believe in himself.

He said coming into his first practices in 2018, he wasn’t sure what to expect, and that put him on his heels. As he earned more playing time, with four appearances in 2019 and seven in 2020, and got more experience, his conviction in himself and his role grew.

“How do you find your confidence to where when you’re out there against another Big Ten team, you trust yourself to get it done?” Turner said. “I think (Eschenbach’s) has been from outworking other people, spending the extra time. He shines when the lights aren’t on and he’s still here on the practice field hitting the sled by himself or coming up and meeting with me. He meets with me more than any of them, asking for extra help with that. And so I’ve seen that confidence switch finally turn on for him in these last few months, last year even, but he had to kind of find it a different way.”

Toward the end of Tuesday’s practice, Eschenbach hauled in a catch around a defender, drawing cheers from the offensive players watching. He stopped to pose, flexing his arms and hamming it up for his teammates.

Ferguson said that’s indicative of how Eschenbach is finding his groove.

“He’s getting the job done,” Ferguson said. “He’s working, he’s definitely going to make an impact this year, for sure.”

Photos: A look back at Barry Alvarez's tenure with the Wisconsin Badgers 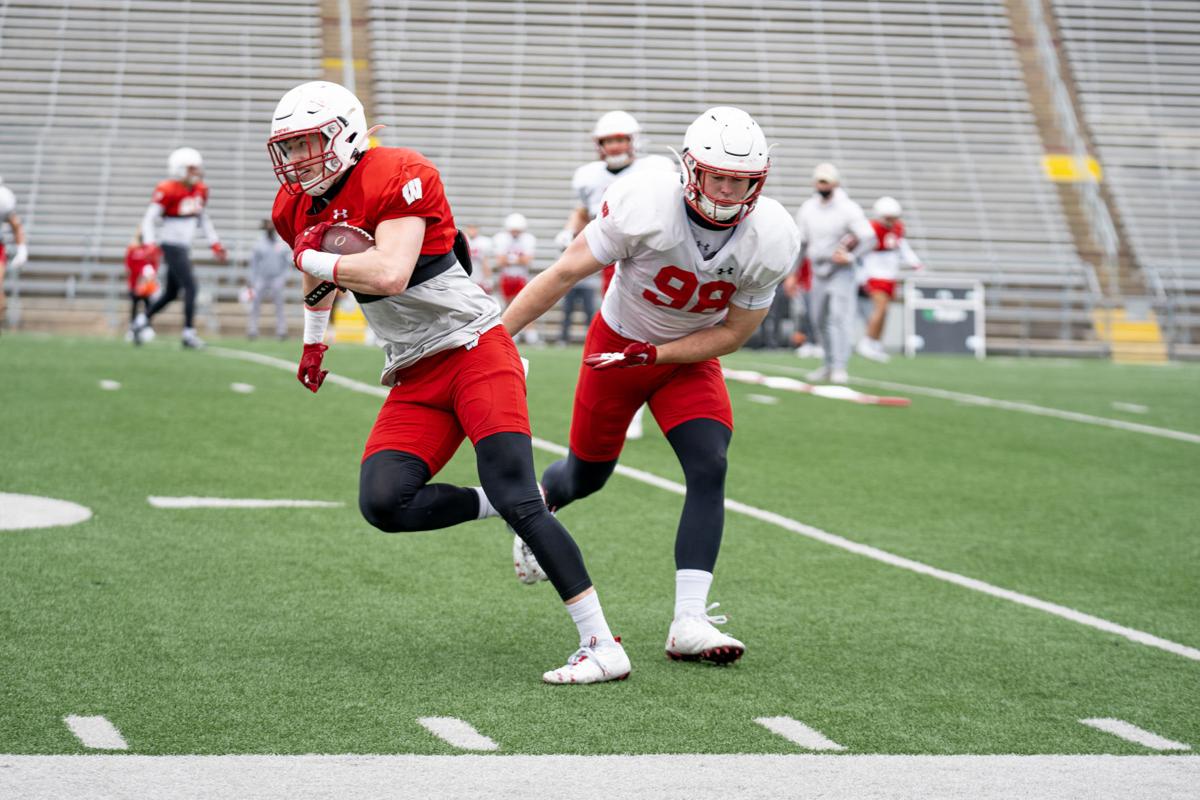 Tight end Jack Eschenbach, left, is one of the leading candidates for the No. 2 spot on the depth chart behind senior Jake Ferguson.