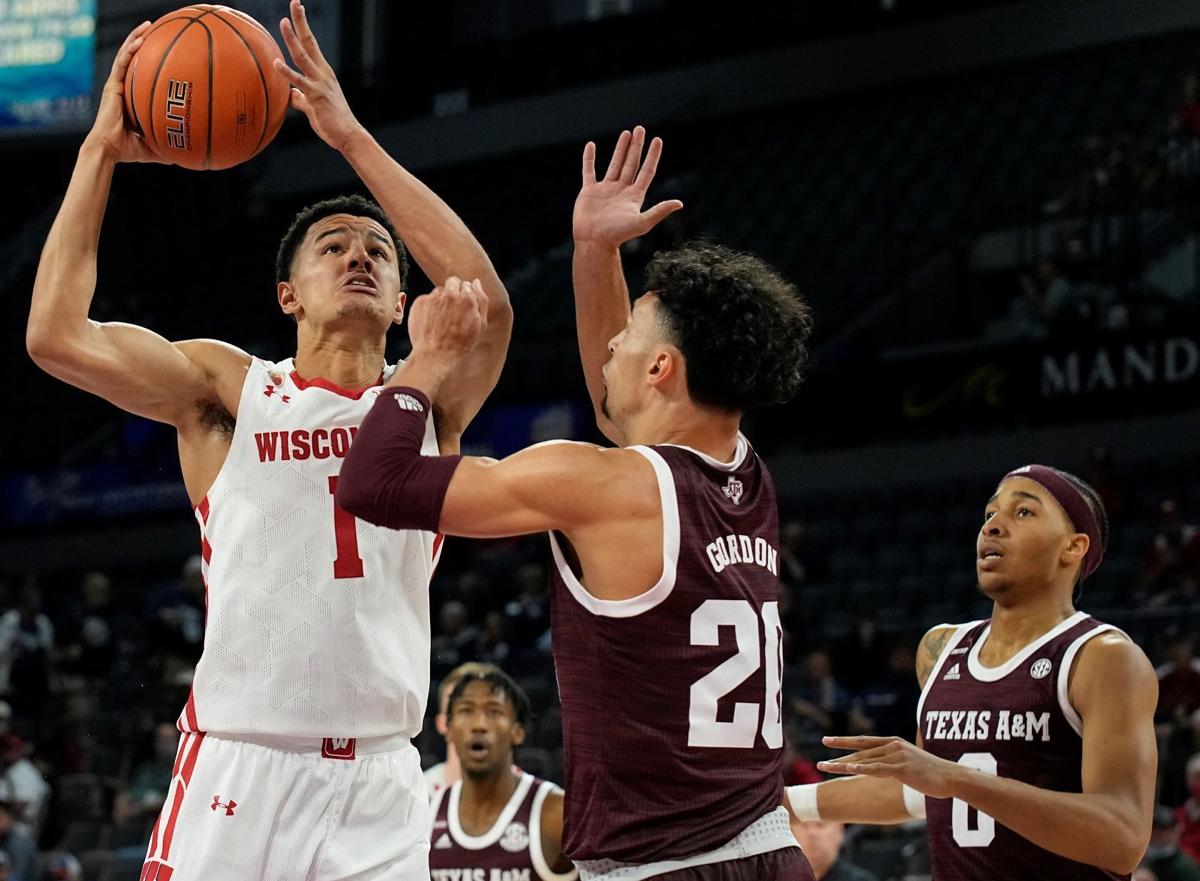 UW guard Johnny Davis drives against Texas A&M's guard Andre Gordon during the second half Monday in Las Vegas. The sophomore finished with 21 points and nine rebounds — both team highs. 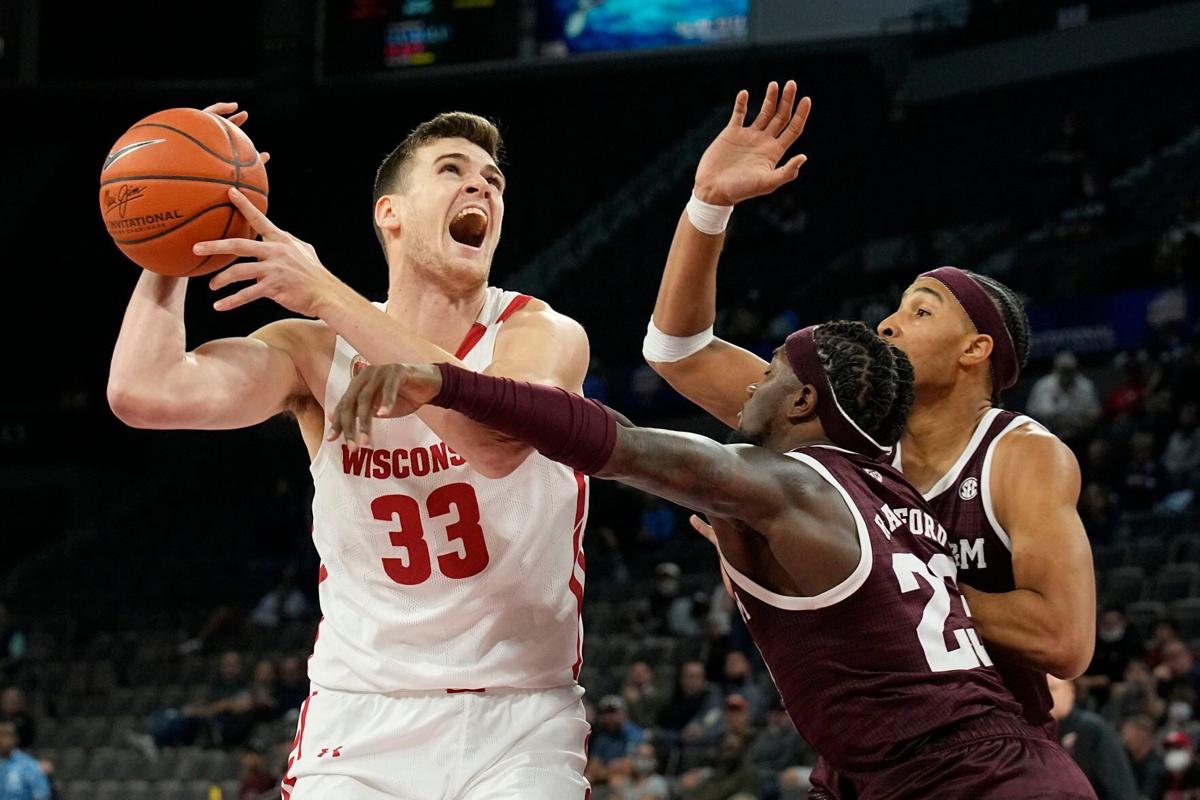 LAS VEGAS — The University of Wisconsin men’s basketball team rallied after a slow start in the first half and pulled away for a 69-58 win against Texas A&M on Monday afternoon at Michelob Ultra Arena in the first round of the Maui Invitational.

UW got off to a rough start in the first half as the Aggies connected on 50% of their shots and the Badgers didn’t break 25% until a first-half surge.

Coach Greg Gard said he was worried when the Badgers trailed by 16 points early.

“We have to do a better job and not put ourselves in that type of position,” Gard said. “The response is always what we measure people by and we reacted to them much better than at the beginning.” 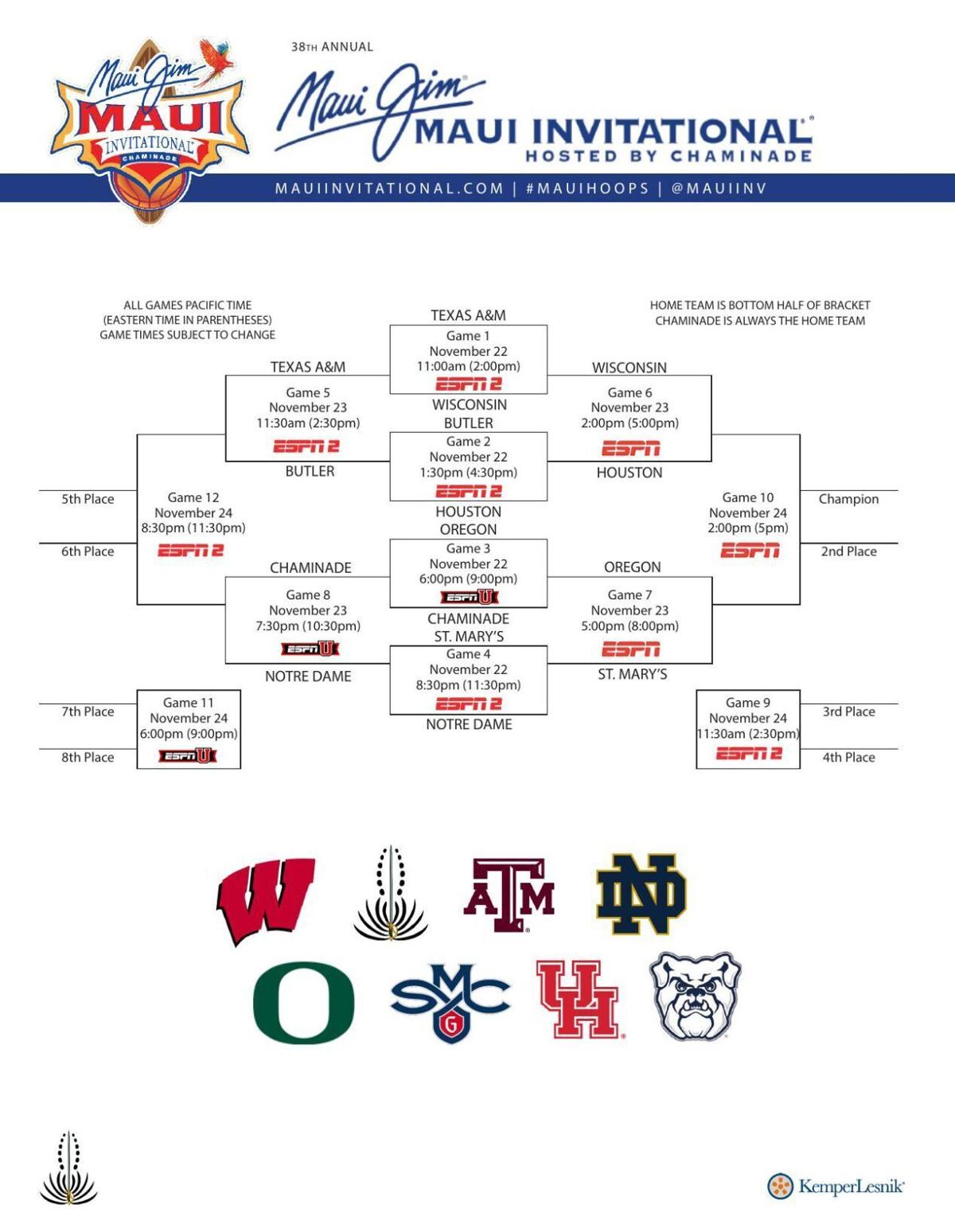 The second half started completely differently for the Badgers, who scored 18 points on their first 10 possessions. A 14-2 run over 3:32 allowed UW to build an 11-point lead with 13:49 remaining.

UW’s opened its largest lead, 61-43, with 8:03 remaining. Texas A&M pulled within seven points in the final two minutes, but got no closer.

Here are three things that stood out from the game.

The Badgers trailed by 13 points with 7:10 remaining in the first half, but used a 15-1 run to take their first lead during what may have been their best stretch of play this season.

It started with Davison hitting a jumper. Davis then grabbed a defensive rebound and Crowl scored after rebounding junior forward Tyler Wahl’s miss. The Badgers forced an Aggies turnover on a charge and Davison quickly made a 3-pointer. He called for the crowd to stand on their feet as he ran back on defense. Wahl pressured Texas A&M’s Hassan Diarra and the Badgers got the ball back.

UW didn’t score on its next possession but Davison drew another charge and Davis hit another 3-pointer. Davison’s 3-pointer tied the game at 33 with 1:19 left in the half.

Davis dunked after rebounding a Davison miss to give the Badgers their first lead — 35-34 entering halftime.

“I’d probably say some of the 3s we hit late in the first half are what put us up,” Davis said. “I think we really settled down and stopped playing their speed and played more our speed and that’s why we ended up winning.”

Texas A&M connected on a majority of its shots early in the first half as UW left wide-open lanes and space for shooters to connect on 3-pointers. The Aggies scoreed 26 points on their first 13 possessions, but UW tightened up defensively and Texas A&M only scored eight points on its next 20 possessions of the half.

Freshman Chucky Hepburn forced a turnover with 4:36 left in the second half when he caused Marcus Williams to stutter and knock the ball back over the half-court line. The Badgers forced 16 turnovers in the game and committed 11.

UW limited Texas A&M to 29.6% shooting in the second half after the Aggies hit at a 50% clip in the first.

Gard said a lot of the early struggles had to do with jitters. It was the first time many of the UW players saw major minutes in a tournament, so it took some adjusting.

He also said once they settled in on offense it gave UW some much-needed confidence to use on defense.

The Badgers scored 15 second-chance points and 22 points off of turnovers, with seven of the points coming off of steals.

Sophomore guard Jordan Davis made a steal with 12:20 left in the game. The Badgers missed their first shot attempt in transition as senior center Chris Vogt had a dunk attempt blocked. Vogt got the ball to Wahl, who smiled as he hung on the rim after dunking.

Open Jim: Why does the Badgers men's basketball team continually struggle to score?

Jordan Davis had only played 11 minutes over the first three games, but contributed the steal and a 3-pointer during his six minutes on Monday.

“It was great to see him out there,” Johnny Davis said. “I haven’t played with him in so long I can’t even remember really. But for him to hit that 3 was huge in the second half. I honestly think I played better when he’s out there.”

Carter Gilmore fought for a defensive rebound but couldn’t get sole possession. He was able to tip it over to Jordan Davis who held onto it before passing it to Crowl, who hit his second 3-pointer of the night.

The University of Wisconsin men’s basketball team must replace seven players from last season. Here’s a breakdown of the Badgers' options at e…

The University of Wisconsin men's basketball coach talks about the new additions to the Badgers' roster at Big Ten media days Oct. 8 in Indianapolis.

UW guard Johnny Davis drives against Texas A&M's guard Andre Gordon during the second half Monday in Las Vegas. The sophomore finished with 21 points and nine rebounds — both team highs.