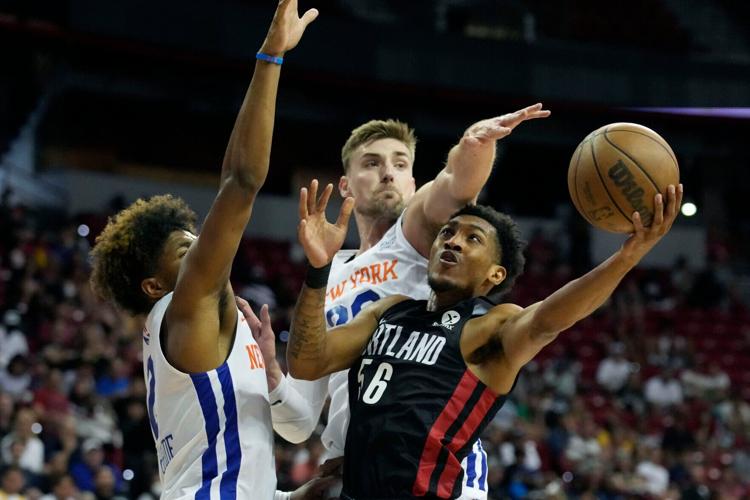 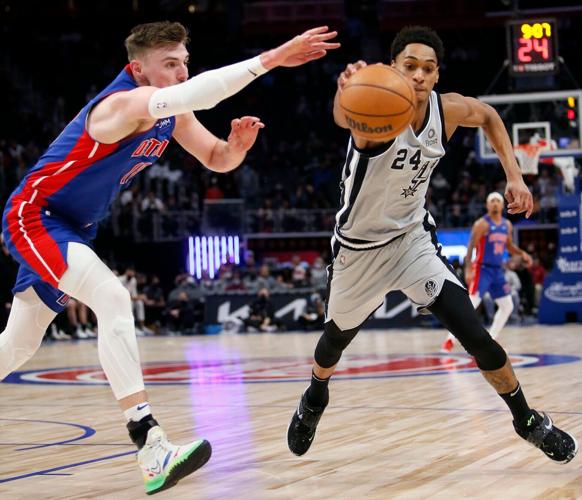 Detroit forward Micah Potter, left, chases down a loose ball against San Antonio's Devin Vassell on Jan. 1. Potter, a former Badger, signed an exhibit 10 deal to return to Detroit, according to media reports.

Micah Potter is moving to Detroit.

The former University of Wisconsin men’s basketball player was given an exhibit 10 deal with the Detroit Pistons, according to Hoops Hype's Michael Scotto.

An exhibit 10 contract is a one-year, minimum salary NBA contract that allows the NBA team to convert the player’s deal into a two-way contract. This has to happen before the start of the regular season.

This means Potter will either have a roster spot with the Pistons, their G-League affiliate or a swing spot once the NBA season begins.

Potter previously played under a 10-day contract with the Pistons last season, appearing in three games. He scored 12 points with nine rebounds in 31 minutes.

This is Potter’s second exhibit 10 deal after signing with the Miami Heat prior to the 2021-22 season. He was dropped to the Heat’s G-League affiliate, the Sioux Falls Skyforce, where he had great success. The 6-foot-10 forward from  named to the All-Rookie First Team after averaging 17.2 points and 9.8 rebounds in 28.8 minutes per game.

Potter was traded from the Skyforce to the Motor City Cruise, the Pistons' G-League affiliate, along with an exchange of draft pick's, according to the Detroit News' Rod Beard.

The forward graduated from UW in 2021 before pursuing a professional basketball career. He was the second-leading scorer for the Badgers averaging 12.6 points and 6.1 rebounds during his senior season.

The Detroit Pistons start the regular season Oct. 19 against the Orlando Magic.

See where Wisconsin men's basketball will head next November

With the Badgers in the Bahamas competing in this year's Battle 4 Atlantis, the team's destination for Thanksgiving week 2023 was announced Wednesday. Here's where they'll play next season.

The Badgers overcame a 15-point second-half deficit to force overtime against the No. 3 Jayhawks but they came up just short in the extra period. Here's what we learned.

Chucky Hepburn got on track as the Badgers win another close game to finish their trip to the Bahamas. Here's what we learned.

Things got too close for comfort down the stretch, but the Badgers were able to hold off the Flyers in their Battle 4 Atlantis opener. Here's what we learned.

Connor Essegian’s number was called early in the season. He was up to the challenge due to his love for playing in high-pressure situations.

TV information, potential starting lineups and things to know about the Battle 4 Atlantis to prepare you for the men’s basketball team's game against Dayton.

Wisconsin’s three games were settled by five points. The Badgers return home at 5-1. Here’s what we learned from their trip to the Bahamas.

Things didn't end the way the Badgers wanted in the Battle 4 Atlantis semifinals. But there were still plenty of positive signs for Greg Gard's team.

Badgers coach Greg Gard knew he would need help from his bench to pick up a win in the Battle 4 Atlantis opener against Dayton. Here's who stepped up.

Chucky Hepburn struggled shooting and taking care of the ball to start the Badgers' season. He broke out with a career high on Friday.

Detroit forward Micah Potter, left, chases down a loose ball against San Antonio's Devin Vassell on Jan. 1. Potter, a former Badger, signed an exhibit 10 deal to return to Detroit, according to media reports.