Long distance relationships can be difficult, but long distance coupled with the added challenges of the COVID-19 pandemic and a college basketball season made for an interesting beginning for Brad Davison and Tyra Buss.

Their 11 month relationship, which started via social media, blossomed through FaceTimes and rendezvous in the middle of their respective institutions.

Davison would travel from the University of Wisconsin to meet Buss — an assistant coach at the University of Evansville — in Bloomington or Decatur, Illinois. He’d end his 200-mile drive with a stop at a restaurant, a date with Buss and then would get back on the road for class and practice the next day.

“When I look at last year, there were a lot of struggles and challenges,'' Davison said. “She was an incredible blessing through it all. She was someone that I could always go talk to. She was, even though we were distanced, just a FaceTime away.”

Davison got down on one knee last week to propose to Buss in front of both of their families. With “My Person” by Spencer Crandall — the couple’s signature song — playing in the background, Buss said yes.

The two have been together for a little less than a year but on each other’s radars for longer. Davison is entering his fifth season on the UW roster and Buss graduated from Indiana University in 2018 after playing four seasons for the Hoosiers — she even helped IU to a WNIT championship.

Their relationship began when Buss, 25, reached out to Davison, 22, on Instagram after hearing about him from a mutual follower. Direct messages led to swapping of numbers, which grew into long phone calls, FaceTimes and eventually in person dates. It all led to the pair's engagement.

A mutual love of basketball and similar family values helped the pair grow a relationship while living 435 miles a part.

Their relationship was strengthened through basketball. Davison referred to Buss as his “biggest fan,” and she shared the same sentiment. They'd watch each other’s games whenever their schedules allowed them.

Not only are they each other’s biggest fans, but also can be each other’s harshest critics. Buss, now an assistant at Wisconsin-Milwaukee, said she didn’t shy away from pointing out mistakes in Davison’s on court performances last season.

Davison would call Buss and have what they called “Tyra’s  Tip Time” before all of his games. She would share her top three tips for facing the opponent and Davison would apply them during the game. In essence, he had his own personal coach.

Davison also helps Buss become a better coach. The UW graduate student has had a lot of experience with various coaches and Buss often comes to him as a sounding board.

Buss one time came to Davison needing new drills to run with her players. They came up with a list of drills Davison had done over the years and ones Buss has done as a player. He said it’s like having two brains in one since both of them have basketball experience.

“We get to talk every day about how I can become a better player and a better teammate from her perspective,” Davison said. “Then I can tell her, from a player's perspective, how she could be a better coach and care for a player.”

Davison plans to become a coach one day. Having a fiance who also is a coach has its positives and negatives. Buss can help him navigate the process of finding a job in the profession since she’s done it twice. But what happens if an opportunity comes up that would mean living apart?

Davison said Buss is his No. 1 priority no matter what happens after he graduates.

Right now, the pair are eager to plan their wedding. They’re looking for a date next summer and are trying to get all of the big things planned before the basketball season hits.

They’re also looking forward to enjoying Davison’s last season as a player. Buss said she hopes she can witness him win not only a Big Ten championship, but also make a deep NCAA Tournament run.

Even though Buss is a Hoosier at heart, the pair both said she will be decked out in Badger gear for every basketball game she’s able to attend. She said it’ll be hard to root against her alma mater, but Davison is her No. 1 and she’s his No. 1 fan.

Get to know current, former Badgers headed to Tokyo to compete in the Summer Olympics

Yet that’s what happened Saturday night in perhaps the biggest upset at the Olympic trials in Omaha, Nebraska. Smith, the world record holder, finished third behind Rhyan White and Bacon in the finals of the 200 back and will not swim that race at the Olympics.

Days after revealing she was diagnosed with overtraining syndrome, Simone Manuel brought the crowd to its feet on the final night of the trials Sunday with a thrilling victory in the 50-meter freestyle.

The first Black woman to capture an individual gold medal in swimming, Manuel’s hopes were on the ropes after she failed to even qualify for the final of the 100 free, the event she won five years ago in Rio de Janeiro.

Nathan Adrian’s bid for a fourth Olympics came up short when he finished third in the men’s 50 free. Caeleb Dressel tied his American record with another dominating performance, touching about a half-body length ahead of Michael Andrew in :21.04.

Andrew earned his third individual event at the Olympics with a time of :21.48.

Former University of Wisconsin athlete Alicia Monson made her first Olympic team after finishing third in the 10,000 meters at the U.S. Olympic Track and Field Trials on Saturday in Eugene, Oregon.

Karissa Schweizer, who was three seconds behind Monson at the bell lap, placed second.

Former University of Wisconsin athlete Georgia Ellenwood will represent Canada in the Tokyo Olympics next month.

Ellenwood, a native of Langley, Canada, recorded a personal best of 6,314 points to win the heptathlon at the Stadtwerke Ratingen Mehrkampf-Meeting over the weekend in Ratingen, Germany.

Record time: At the U.S. trials Monday in Eugene, Oregon, Elle Purrier St. Pierre won the 1,500-meter race in an Olympic trials-record time to earn a spot at the games.

Monumental: New Zealand’s Laurel Hubbard hefted 628 pounds in two lifts on the way to qualifying in the women’s super-heavyweight division for the Olympics.

She will be the first transgender athlete to compete at an Olympic Games. At 43, she will also be the oldest weightlifter at the games.

Aleem Ford and Nate Reuvers have signed professional deals, while Micah Potter and D'Mitrik Trice are hopeful for their NBA chances. 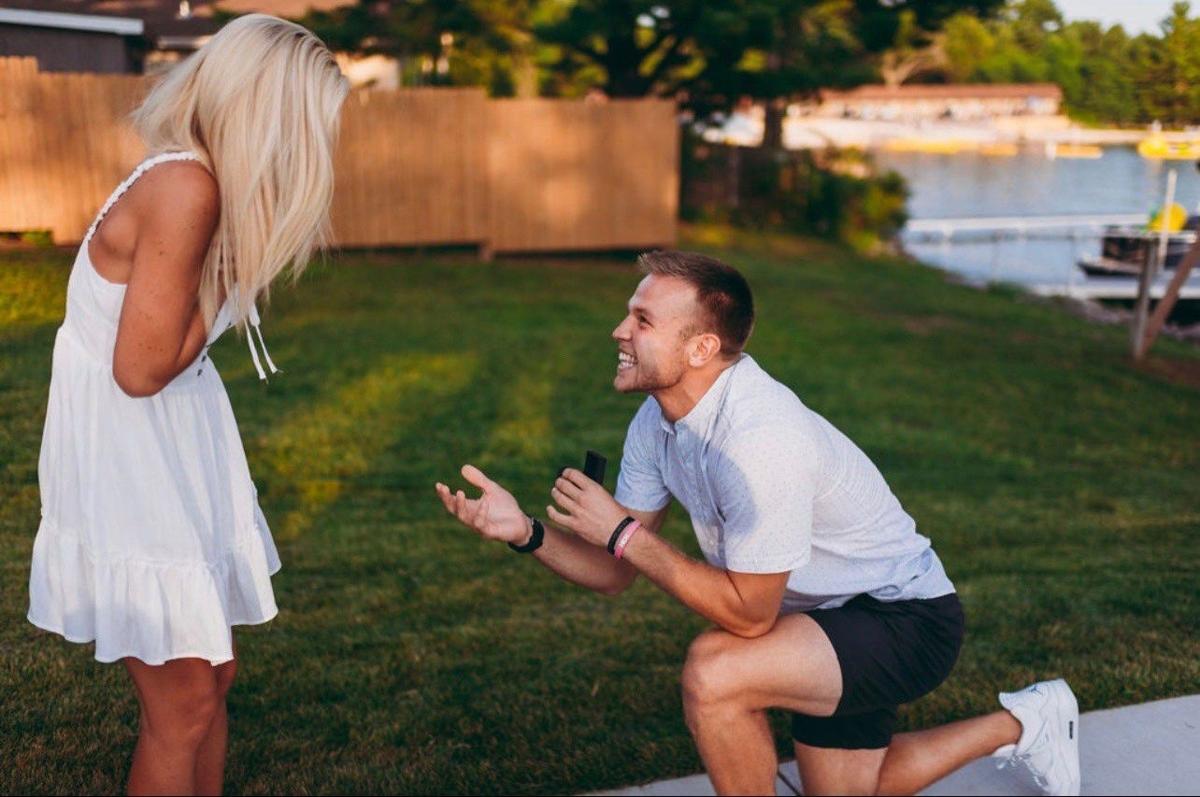 University of Wisconsin's Brad Davison gets down one one knee and proposes to Tyra Buss — a former University of Indiana women's basketball player. 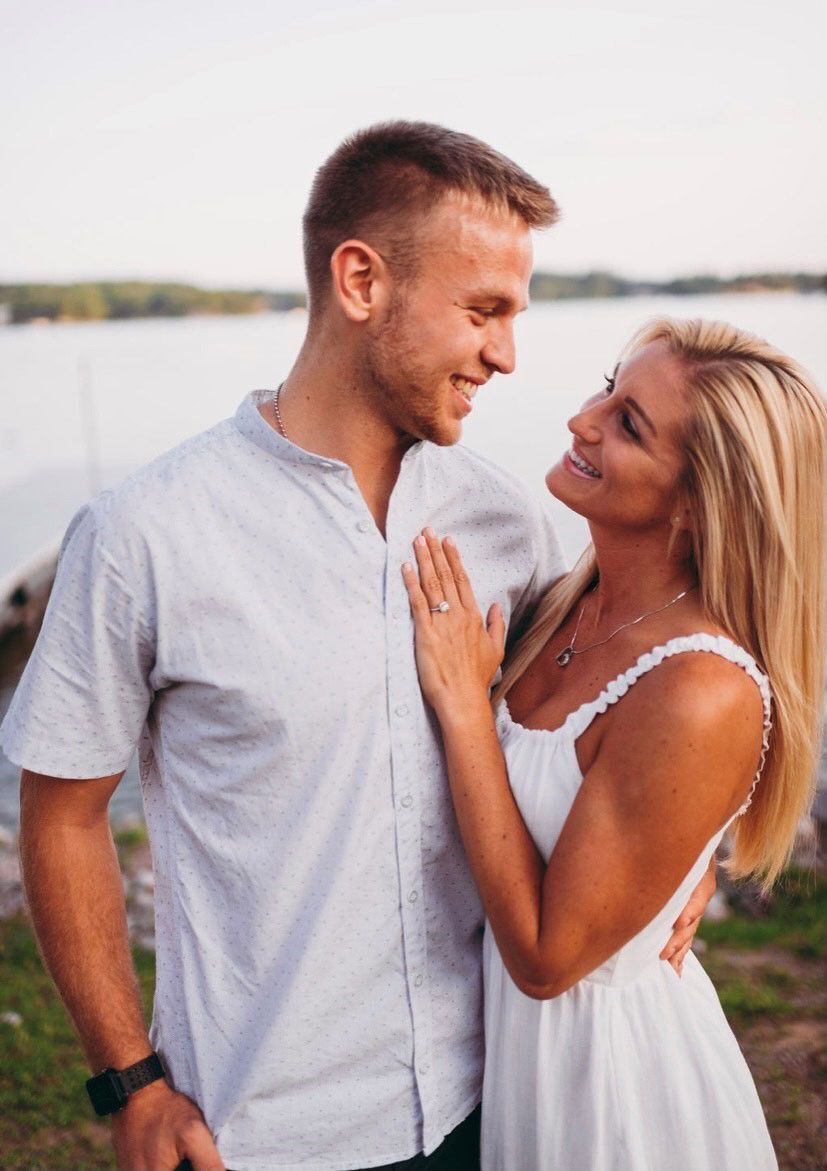 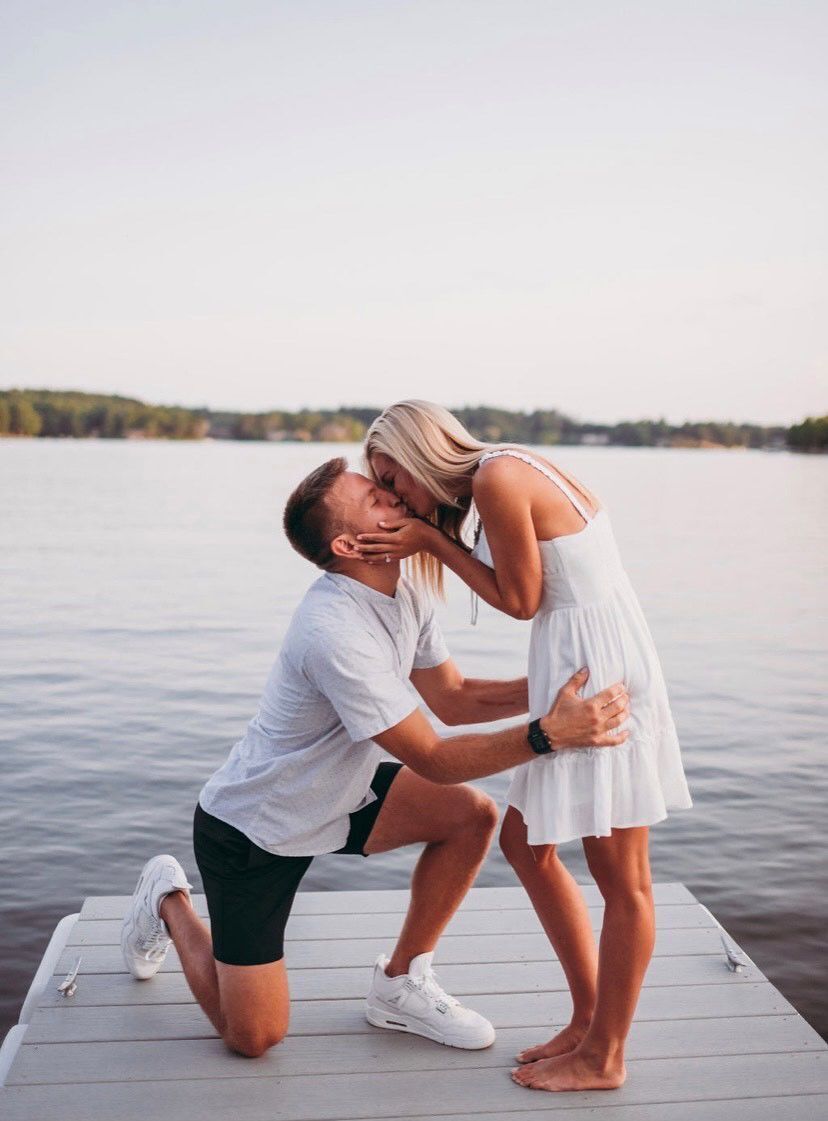 University of Wisconsin graduate student Brad Davison is headed into his fifth season as a Badger, while Tyra Buss begins her first as an assistant coach at UW Milwaukee.