The most oft-repeated question in football has made a resounding resurgence around the Big Ten after another weekend filled with less than stellar quarterback play.

"We will internally name a starting quarterback Tuesday when we talk to our guys," Purdue coach Jeff Brohm said Monday, two days after Aidan O'Connell replaced Jack Plummer and led the Boilermakers to the game's only touchdown in a 13-9 victory over the Fighting Illini.

Everybody should stay tuned.

As league play begins in earnest, quarterback quandaries, as usual, are starting to emerge as the make-or-break point for underperforming teams.

Bielema appears to be leaning to keeping Brandon Peters as the starter despite a second straight poor performance since returning from a left shoulder injury and amid pleas from fans to give Artur Sitkowski, the Rutgers transfer, another shot. Illinois (1-4, 1-2 Big Ten) has lost four straight as it prepares to face Charlotte this weekend.

Minnesota coach P.J. Fleck also faced the question after Tanner Morgan went 5 of 13 for 59 yards with four sacks and two interceptions in a stunning 14-10 home loss to Bowling Green. The Golden Gophers (2-2, 0-1) will try to rebound at Purdue (3-1, 1-0) this weekend.

"I have to play way better," Morgan said.

So does Wisconsin quarterback Graham Mertz, who threw a career-worst four interceptions and had two returned for scores in a blowout loss to Notre Dame. The worst game of Mertz's career also came against his predecessor, Jack Coan.

Since opening last season with seven TD passes and no interceptions in two wins, Mertz has gone 3-5 with three TDs and 11 interceptions. Yet coach Paul Chryst will stay the course and Mertz said he is confident he can turn things around this weekend when the unranked Badgers (1-2, 0-1) host No. 14 Michigan.

"I will never lack trust in myself," Mertz said. "As soon as that goes, you lose everything."

Sometimes, a switch works out.

No. 11 Ohio State (3-1, 1-0) held out injured quarterback C.J. Stroud against Akron and Kyle McCord responded by throwing for 319 yards and two scores in a 59-7 rout. McCord was named Big Ten freshman of the week and it's unclear who will start Saturday at Rutgers (3-1, 0-1).

Nebraska coach Scott Frost believes Adrian Martinez seems to have learned from last season's struggles, though his quarterback has been sacked 18 times and sputtered in the red zone this season. The Cornhuskers (2-3, 0-2) host Northwestern (2-2, 0-1) next.

"I benched Adrian last year when he was not playing well enough and he is playing at an elite level right now with some of the things he is doing," Frost said.

There are myriad reasons for what's gone wrong this season.

While nobody has blamed Peters' struggles on his injury or Plummer's on a depleted supporting cast, Morgan and Minnesota are still adapting to life without running back Mohamed Ibrahim, their best offensive player.

Other Big Ten teams are coping with similar challenges.

No. 14 Michigan and No. 17 Michigan State are contending with more defenders at the line of scrimmage after strong ground games led both to 4-0 starts. The result: Two surprisingly close calls last weekend.

Rutgers shut out the Wolverines in the second half as Cade McNamara completed nine passes in a season-high 16 attempts but missed some open receivers including one in the end zone. He'll almost certainly face a similar scheme this weekend against a rugged Wisconsin defense.

Spartans quarterback Payton Thorne finished with 183 yards and one TD in an overtime win over Nebraska but also had one interception and was sacked three times when the 'Huskers dared him to throw deep. He may need to do more this weekend as his defense deals with Western Kentucky's high-scoring offense.

Indiana's Michael Penix Jr. could give Thorne a scouting report after throwing for 373 yards and running for a touchdown in a 33-31 victory over the Hilltoppers last weekend. The Hoosiers (2-2, 0-1) visit No. 4 Penn State (4-0, 1-0) on Saturday.

But the real question remains how many teams are willing to yank a starter if things don't get fixed.

"When you are switching guys in and out of the offense, you're looking for the right ingredients," Bielema said. "I'm no 'Master Chef,' but I know what's good."

Top photos of the day as selected by the Associated Press. 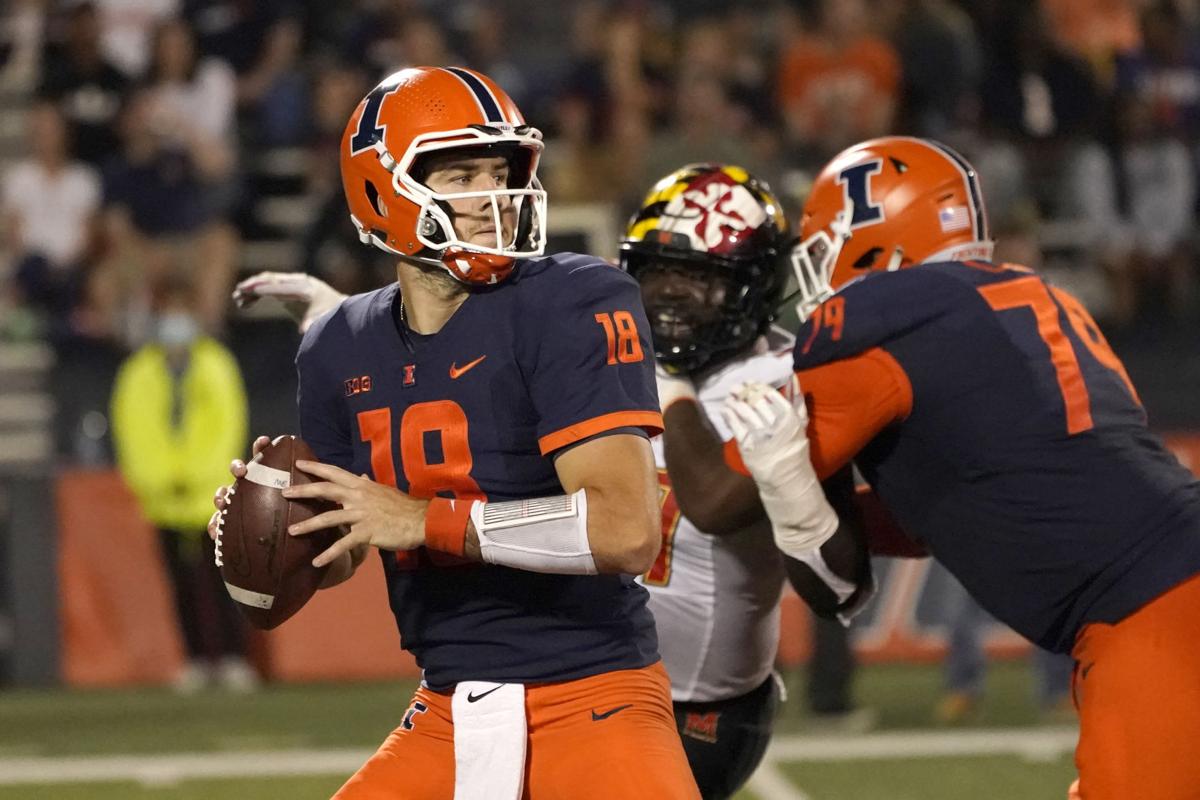 Illinois quarterback Brandon Peters looks to pass during the second half of an NCAA college football game against Maryland Friday, Sept. 17, 2021, in Champaign, Ill. 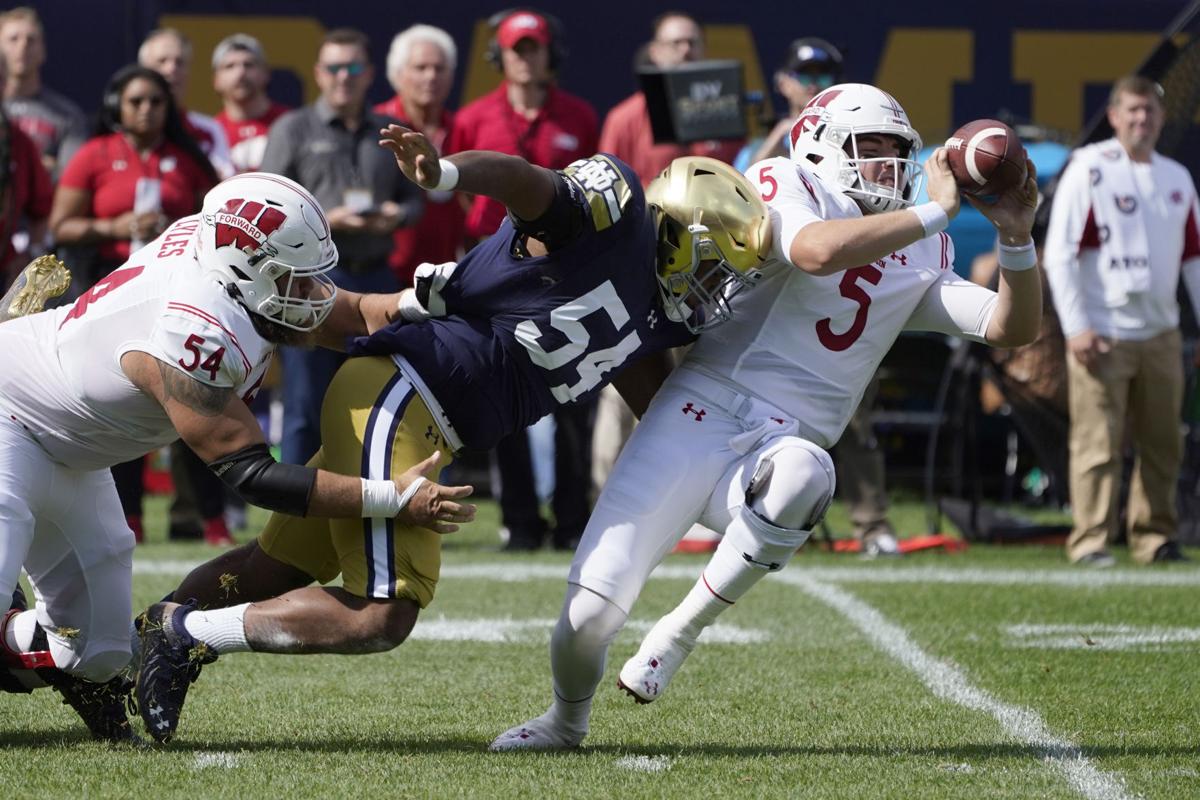 Wisconsin quarterback Graham Mertz (5) makes a two-handed pass to avoid the pressure from Notre Dame defensive lineman Jacob Lacey after Lacey got past lineman Kayden Lyles during the first half of an NCAA college football game Saturday, Sept. 25, 2021, in Chicago. 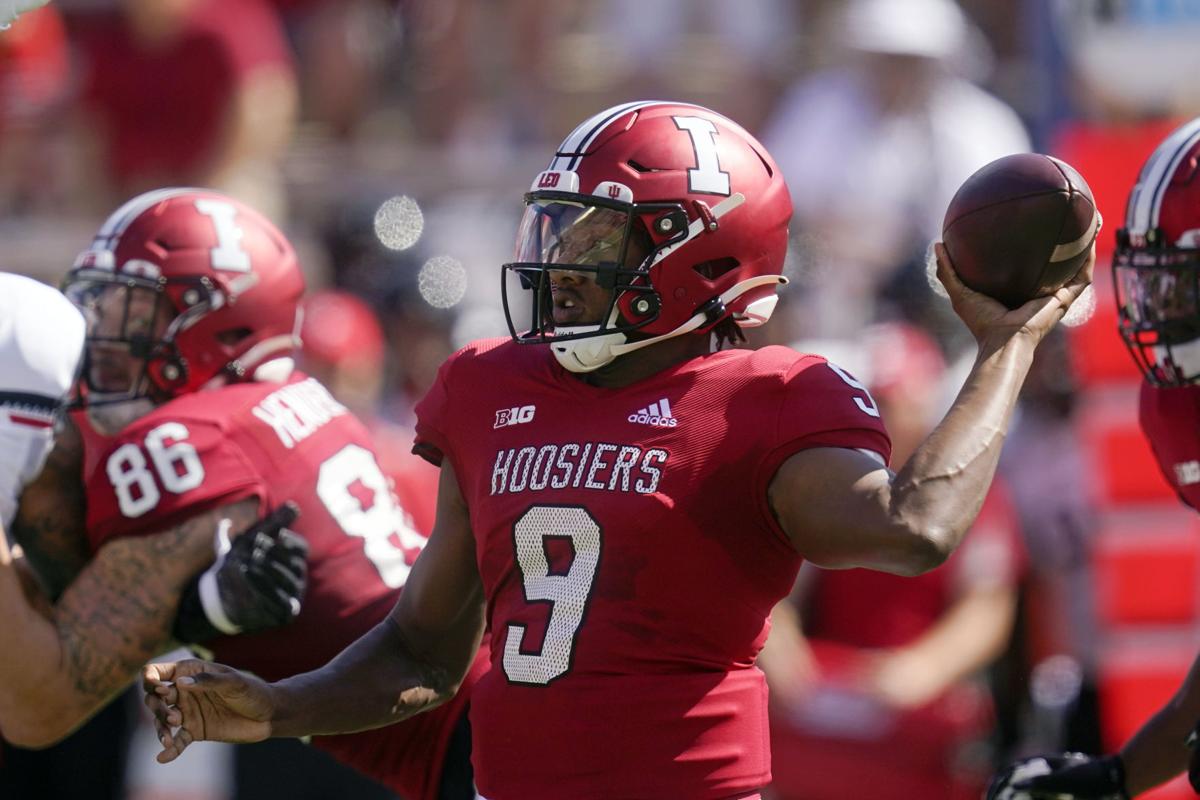 Indiana quarterback Michael Penix Jr. (9) throws during the first half of an NCAA college football game against Cincinnati, Saturday, Sept. 18, 2021, in Bloomington, Ind. 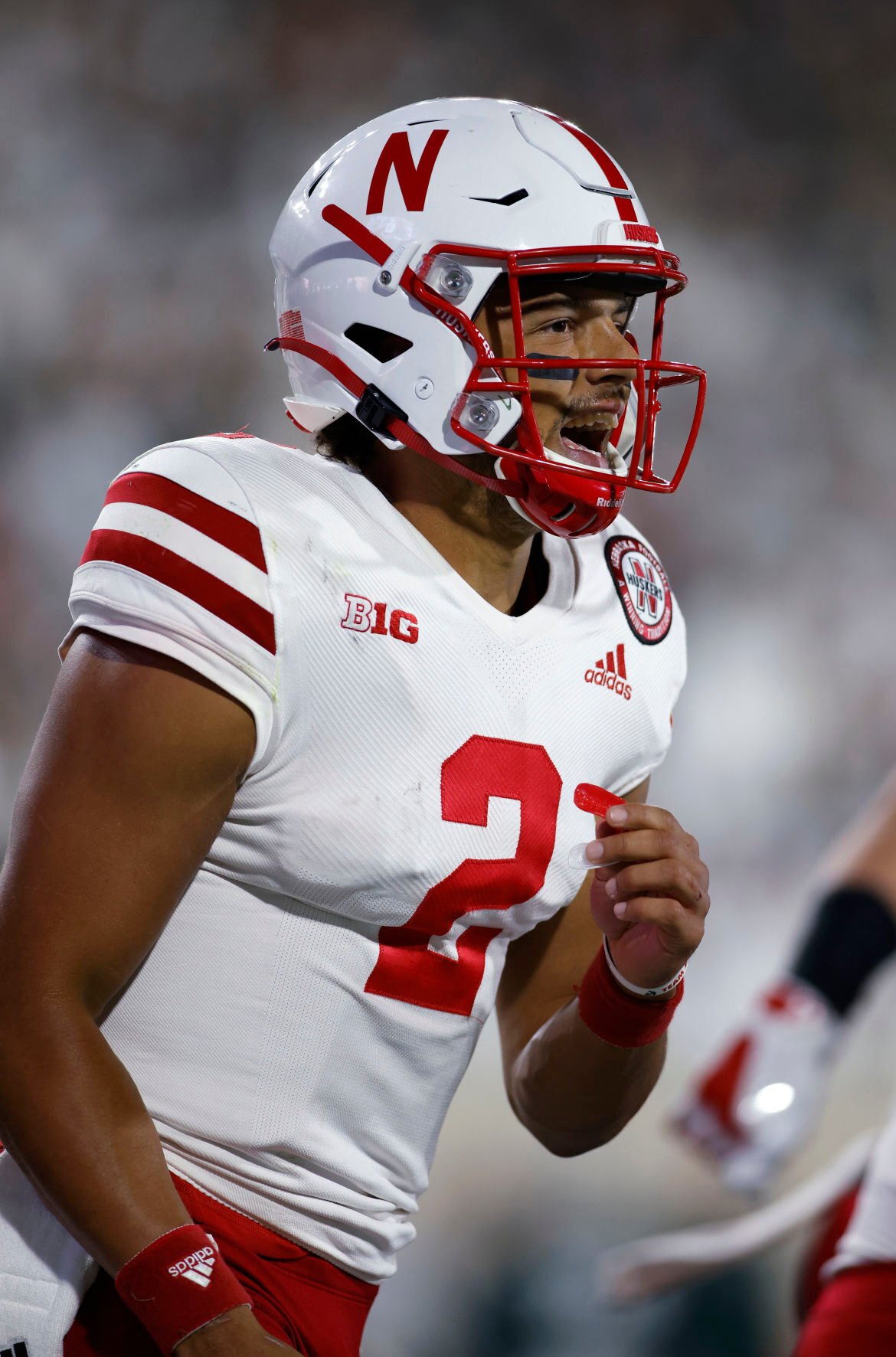 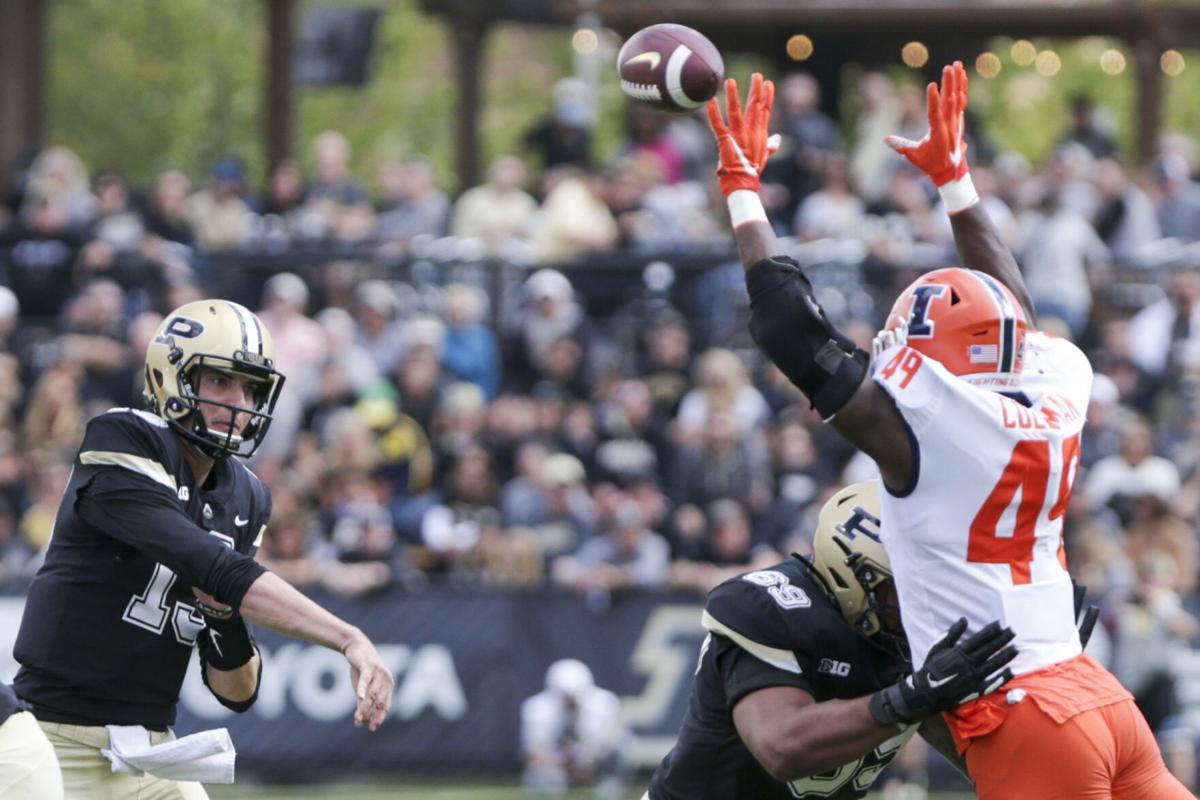