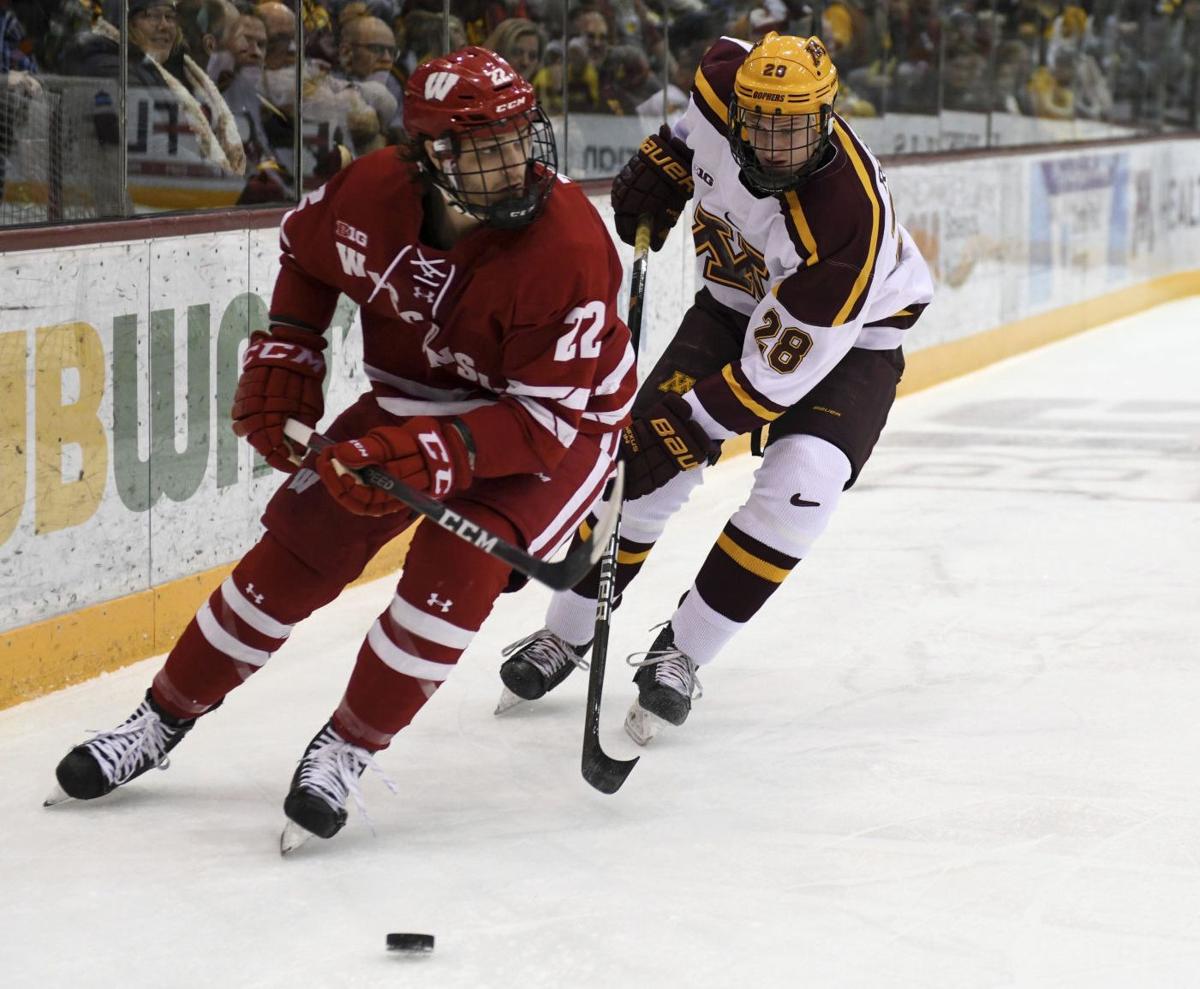 Badgers senior Max Zimmer played only seven times in the first 22 games this season but has been a bigger presence in the lineup the past three weeks. 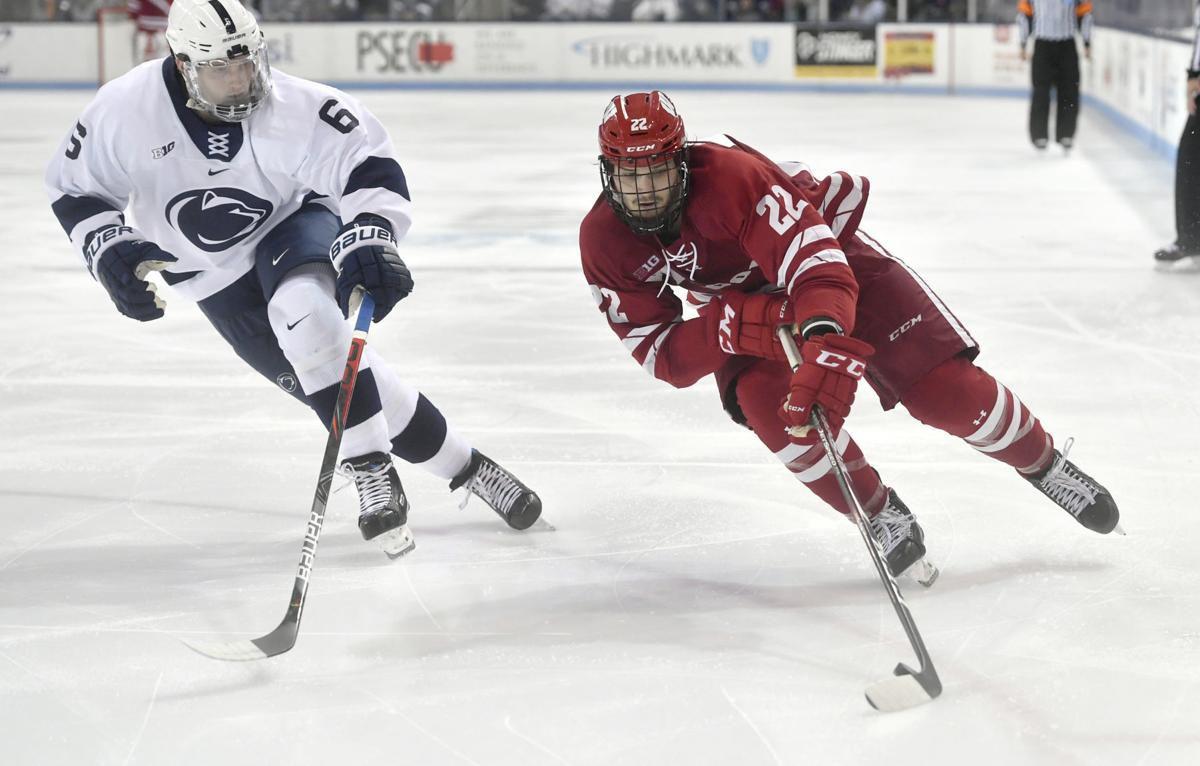 Max Zimmer takes a career high-tying two-game goal-scoring streak into Friday's game against No. 9 Penn State at the Kohl Center. A goal in each game against Michigan last weekend gave Zimmer three in his past six games.

Other than a few summer dalliances with other models, Max Zimmer has been faithful to the same style of stick since his freshman year of high school: P46 Bergeron curve, 85 flex.

Some things become so comfortable you don’t seriously consider changing them.

There was a time late last year, however, when Zimmer felt a level of unease with the clock running out on his time with the University of Wisconsin men’s hockey team and decided to shake up his routine.

The senior forward started waking up earlier than normal to go to the Kohl Center for an extra bike workout and to get ahead on school work. Sometimes, he’ll get a few teammates to join him on the ice.

“You’re here at one of the best universities in the country, and I don’t think I totally took advantage of it the first couple of years I was here,” Zimmer said. “I want to go out in the right fashion and take this semester and this year as a professional. Do the right things every day and not waste any time that I have left here.”

Zimmer’s teammates and coaches have noticed, and in the past few weeks, the work has done something his previous efforts haven’t: carried over into games.

He takes a career high-tying two-game goal-scoring streak into Friday’s matchup against No. 9 Penn State at the Kohl Center. A goal in each game against Michigan last weekend gave him three in his past six outings; it took him until Jan. 24 to register his first of the season.

In short, Zimmer’s collegiate career has been a series of promising episodes followed by longer stretches of less productive weeks.

He has been the kind of player whose practices suggest he’s going to be a consistent presence as a top-six forward. His games, however, haven’t backed that up.

Zimmer, the Badgers’ only senior forward or defenseman, has scored 14 times with 25 assists in 107 collegiate games. This season, illness provided an early setback and injury kept him out of two games in January, and he played only seven times in the first 22 contests.

Zimmer got a chance at more ice time in the past three weeks as the Badgers sought a veteran presence in the lineup.

“His attitude, his practice habits, his care factor has been outstanding,” UW coach Tony Granato said. “I think a lot of the younger guys should be looking to him to learn from how he’s handled himself.”

A fourth-round NHL draft pick of Carolina before he arrived at UW in 2016, Zimmer had been a regular participant at the Hurricanes’ summer development camp until last year. He said the team told him it was looking more toward its recently drafted players for the 2019 event.

Still, he hopes there’s room for him somewhere in pro hockey after he’s done at UW.

Despite two losses last weekend that extended the Badgers’ skid to five games, Granato had nothing but praise for the way that Zimmer played on a line with Ty Pelton-Byce and Cole Caufield.

Granato said Zimmer has been at his best and most confident recently.

“He’s battled through so much in the past four years,” Granato said. “Right wing, left wing. Maybe power play, maybe not. Maybe in the lineup, maybe not. This kid has got a lot of heart.”

Having scored once already in the final minute of a period last Saturday, Zimmer had a chance to tie the game with a one-timer from the slot in the final 30 seconds of regulation.

In reality, it would have been a major turn to the usual arc of Zimmer’s story had that last shot gone in instead of being saved.

But that he was even on the ice, in good position and with the puck on his stick in a deciding moment is a sign that things have shifted for Zimmer. Better late than never.

“With putting in all that extra work comes a lot of confidence,” he said. “Six months ago, I don’t think, talent-wise, I was much better or worse than I am now. I think it’s just knowing that you have the abilities and having the confidence to make plays.”

The Badgers were swept at Michigan last weekend, now they prepare for Penn State coming to the Kohl Center this weekend. We also go 2 minutes …

Badgers senior Max Zimmer played only seven times in the first 22 games this season but has been a bigger presence in the lineup the past three weeks.

Max Zimmer takes a career high-tying two-game goal-scoring streak into Friday's game against No. 9 Penn State at the Kohl Center. A goal in each game against Michigan last weekend gave Zimmer three in his past six games. 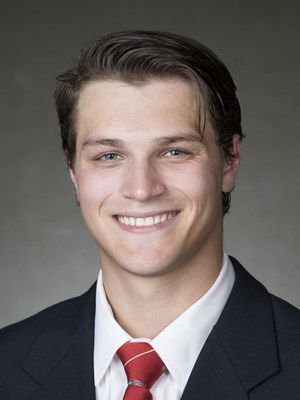