Become a Member
Read Today's E-edition
Share This
Jim Polzin: Five things for which Wisconsin sports fans should be thankful
0 Comments
Share this
1 of 2 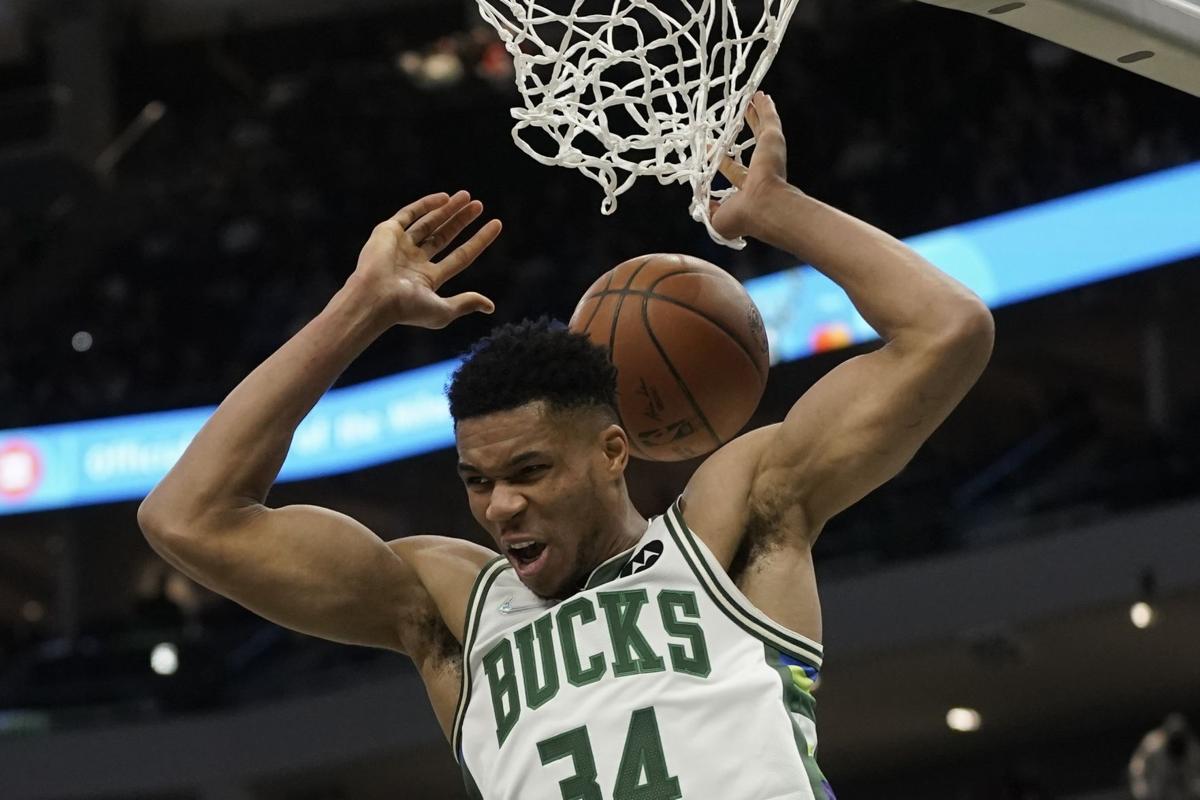 Bucks star Giannis Antetokounmpo dunks against the Lakers during a game earlier this season in Milwaukee. 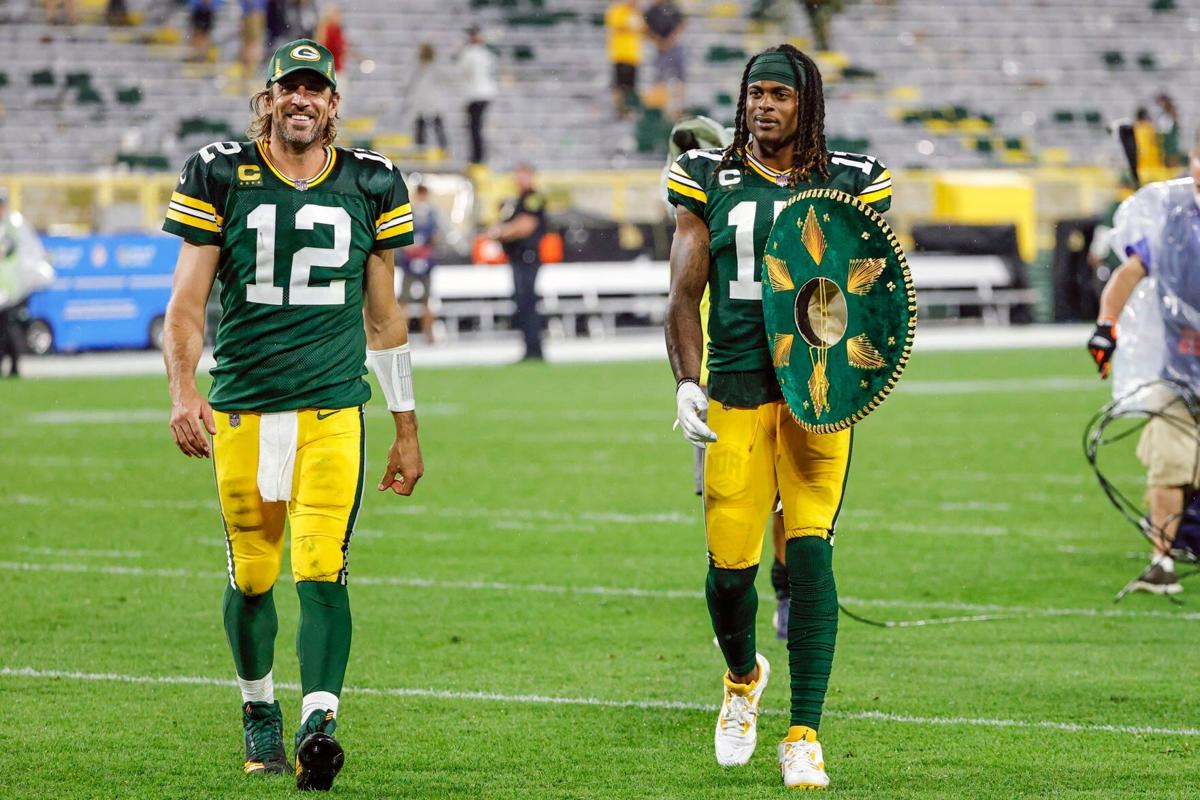 Packers quarterback Aaron Rodgers and wide receiver Davante Adams walk off the field after a game earlier this season in Green Bay.

There were two days remaining until Thanksgiving last year when a matchup between the University of Wisconsin football team and Minnesota, scheduled for later in the week, was called off due to the number of positive COVID-19 cases within the Golden Gophers program.

Camp Randall Stadium sat empty that Saturday. The following day, the only fans allowed inside Lambeau Field for the Green Bay Packers’ 41-25 win over the Chicago Bears were roughly 300 team employees and their families.

A lot has changed in a year. Sports have returned in full force and fans are back in the stands.

I’m thankful that I can look around stadiums and arenas and see people in the seats. And hear them.

Wisconsin sports fans have plenty to be thankful for as well. Here are five things that come to mind for me:

It’s not just that the Greek Freak is a two-time MVP who does things on a basketball court that a 6-foot-11 player shouldn’t be able to do.

It’s that he’s our superstar doing those things, creating oohs and aahs and joy.

Antetokounmpo could have forced his way out of Milwaukee but chose to sign a five-year, $228.2 million supermax deal in the summer of 2020 because, he later would say, his job wasn’t finished. Loyalty like that is becoming more and more rare in sports, and Antetokounmpo made good on his promise, ending a decade of heartbreak for fans in this state by leading the Milwaukee Bucks to an NBA title in July.

All that and Antetokounmpo legitimately seems like a great dude, a role model for kids everywhere to idolize. There are still more than five weeks left in 2021, so I hesitate to declare this the quote of the year, but Antetokounmpo’s answer to a question about his lack of ego is going to be hard to top.

“I figured out a mindset to have that when you focus on the past, that’s your ego,” Antetokounmpo said. “I did this. We were able to beat this team 4-0. I did this in the past. I won that in the past. When I focus on the future, it’s my pride. Yeah, next game, Game 5, I do this and this and this. I’m going to dominate. That’s your pride talking. It doesn’t happen. You’re right here.

“I kind of try to focus on the moment, in the present. That’s humility. That’s being humble. That’s not setting no expectation. That’s going out there, enjoying the game, competing at a high level. I think I’ve had people throughout my life that helped me with that. But that is a skill that I’ve tried to, like, kind of — how do you say, perfect it.”

A lot of Packers fans were ready to move on from Rodgers after a drama-filled offseason in which he considered retirement as an option rather than returning to Titletown for his 17th season. More jumped ship earlier this month when Rodgers tested positive for COVID-19 and gave some, well, interesting takes while explaining why he chose not to be vaccinated.

And Rodgers is pretty special as a quarterback, arguably one of the best to ever play that position. Packers fans are going to miss Rodgers’ quarterback skills when he’s gone — whenever that may be — even if they don’t miss his personality.

Adams, on the other hand, is a great player and likeable off the field. I encourage you to watch one of his news conferences if you get a chance: The man simply is delightful.

He also may be the best wide receiver in franchise history, which is saying something. The chemistry he has with Rodgers, where they can exchange a look and know exactly what the other is thinking, is remarkable.

Rodgers may not be back in 2022. Ditto for Adams. Or maybe they both return to Green Bay. The point is, we have no idea, so enjoy this connection while it lasts.

The Milwaukee Brewers keep knocking on the door of reaching a World Series. There have been some frustrating finishes for a club that has made the playoffs in four consecutive seasons, but at least Craig Counsell’s team has given us a reason to pay attention during the dog days of summer and keep an eye on the standings once September rolls around.

The Brewers consistently have been relevant for an extended stretch, a major achievement for a small-market team. That’s a credit to Counsell’s managing skills and the work of front office dynamo David Stearns.

The Badgers volleyball program has made three trips to the final four and won three Big Ten titles under coach Kelly Sheffield. The 2021 version, which is 23-3 overall and 15-3 in conference play, may add to both of those totals in the next month.

Mark Johnson has led the UW women’s hockey program to six NCAA titles. It, too, could add to that total this season: The reigning champs are off to a 15-0-1 start in 2021-22.

Meanwhile, Paula Wilkins led the Badgers women’s soccer team to a surprising run in the NCAA tournament. UW reached the final 16 before dropping a 2-1 decision to Santa Clara on Sunday.

Those who have stayed

The transfer portal has been a game-changer in college sports and led to much debate. The whole thing has left me with mixed feelings. I believe players should have the right to change programs one time in their careers without penalty while also being concerned that it’s going to hurt the product in football, basketball and other sports.

But let’s take a moment to appreciate the players who have decided to stick it out with the Badgers. The UW football team is within one victory of winning the Big Ten West and couldn’t have reached that point without fifth- and sixth-year seniors such as Faion Hicks, Caesar Williams, Matt Henningsen, Noah Burks, Scott Nelson, Collin Wilder, Jake Ferguson, Logan Bruss, Danny Davis, Kendric Pryor and others. Every player faces adversity and considers transferring at some point during his or her career, but there are far more who stay in it for the long haul. They deserve our applause.

It’s not just football, either. There’s Brad Davison in men’s basketball, Dana Rettke and Sydney Hilley in volleyball and other super seniors on campus who have come back for one more season at UW because they think this place is special.

One more delivery of gratitude before I let you dive into your turkey and stuffing. I’ve been in this new role for almost six months and one thing that has stood out is the amount of feedback I’ve received. Some of it has been positive, some of it negative.

But I love hearing from you and, most of all, thank you for reading my work.

Johnny Davis and Tyler Wahl once again led a gutsy effort late to turn things around against the Gaels. Davis was named tournament MVP.

Discussed in this week's review: The Badgers' offensive line is adding more variety to its scheme, the outside linebackers did their jobs without making a lot of noise and no, Jim Leonhard's defense was not exposed.

The Badgers right now do not have a scholarship to offer, so the 6-foot-2 guard from Hartland will join the program as a walk-on.

The Badgers duo combined to score 52.8% of the team’s points while in Vegas. But that doesn’t tell the whole story of how they led UW to the title.

Halftime observations: How crossing routes are causing problems for Wisconsin's defense against Nebraska

Braelon Allen is having another big game, but the Badgers football team is locked in a tie with the Huskers. Here's what stood out in the first half.

Members of the Wisconsin men’s basketball team, opposing coaches and TV commentators all heaped praise on the sophomore guard, who led the Badgers to the tournament title.

Badgers postgame: Follow live coverage after No. 19 Wisconsin holds off the Nebraska Cornhuskers

The 19th-ranked Badgers picked up their seventh straight win when they defeated the Huskers 35-28 in a Big Ten West battle at Camp Randall.

Braelon Allen became just the sixth Badgers freshman to rush for 1,000 yards in a season. And that's after he didn't get a carry in two games this season.

Gameday quiz: Test your knowledge of Minnesota before they take on Wisconsin

How much do you know about the Golden Gophers? Find out by taking our quiz before they kick off against the Badgers.

Bucks star Giannis Antetokounmpo dunks against the Lakers during a game earlier this season in Milwaukee.

Packers quarterback Aaron Rodgers and wide receiver Davante Adams walk off the field after a game earlier this season in Green Bay.